Not a ton of activity tonight, just trying to be doing something basically.

I cleaned and primed the parts for the fuel selector mount; well, the angles and spacers at least (no need to prime the alclad mount plate piece). I did the ghetto cleaning; that is, rather than scrubbing with degreaser, I just scuffed the pieces and gave them a good wipe down with acetone. I honestly considered not even priming these parts – they’re not going to be exposed to the weather or anything – but in the end the directive to prime everything that’s not alclad was irresistible.

Then I switched gears to the flap bearing blocks. Now that I had the blocks trimmed and drilled correctly, I fit the flap weldment into the blocks and put the whole assembly into the fuselage. The two rear bolt holes for the blocks are predrilled and already have nutplates installed, so I put bolts in those holes to hold the blocks in place. Then I drilled through the other holes to make the forward bolt holes through the floors and mount angles underneath. Later on I’ll get to drill for nutplates in this semi-confined space and rivet them. Should be fun.

Getting this done was made easy by my new tool I got from Cleaveland. I’ve had my angle drill attachment for ages, but one issue with it is that it only accepts threaded drill bits, which is kinda limiting. In this particular case, using anything but the angle drill would have been tough, and the threaded bits were nowhere near long enough to go through the bearing block and then into the actual stuff that needed drilling. But it turns out you can buy a normal drill chick that threads into the attachment, allowing you to use normal drill bits in the thing. Very handy.

Here’s a look at that assembly – also visible in the background is the flap weldment (the white powder-coated tube): 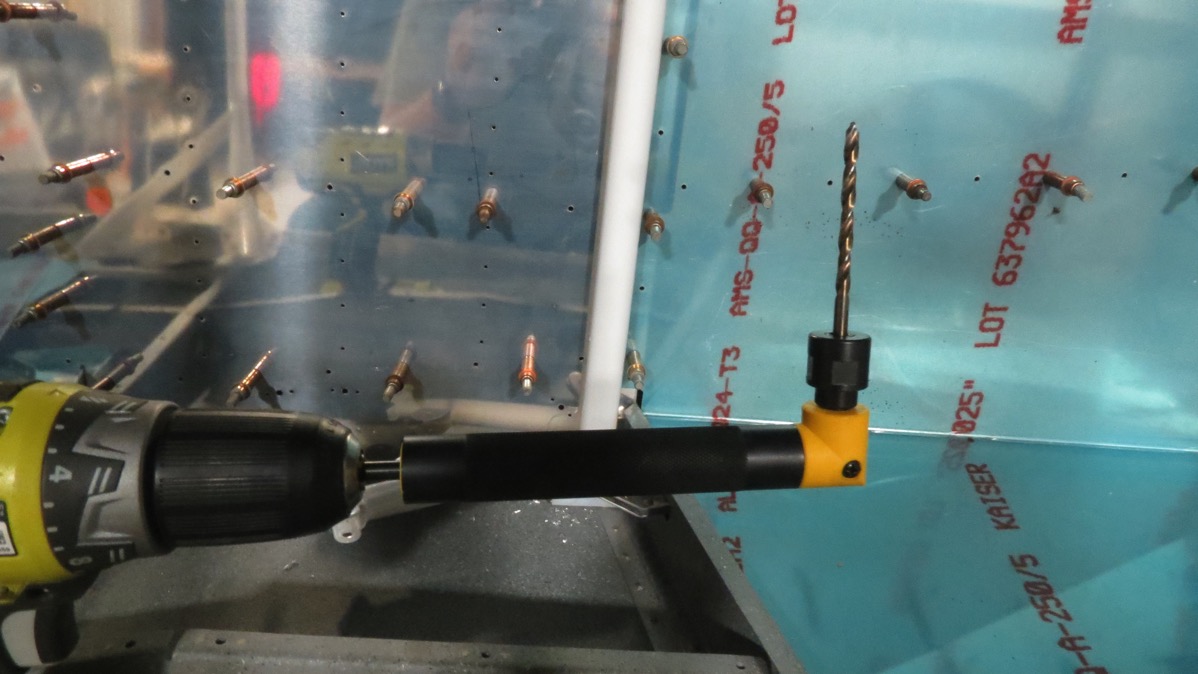 Next up, I’ll rivet the fuel selector assembly, get that finally fitted into the fuselage, and then finally pick up with fitting the mid-cabin covers.