Yup, back at it again. Today it was time to fire up the rivet gun for the first time in, well, probably a year, and get some stuff permanently attached.   Actually, there was a bit of trepidation involved – as I mentioned, I haven’t shot rivets in some time, and the very first batch of rivets I needed to shoot today were a bit on the challenging side.

You see, access in general is a problem while riveting these skins, and so there’s a very specific assembly order that has to be followed. Basically, the rivets you set in step 4 close off access to the rivets from step 3, which close of those from step 2, and so on. Step 1 is the most fun, because you start by riveting the bottom skin to the floor ribs. The aft portion of the forward floor slopes down and eventually joins with the aft end of the bottom skin, so this particular area is kinda wedge-shaped, with the “roomiest” area having maybe an inch and a half between the skins. And that’s where you have to hold a bucking bar to get these rivets done. And you have to bend part of the skin out of the way to even get your arm in there.

Fortunately, in what’s kind of a recurring theme with this build, the amount of time I spent trying to carefully plan the best way to do this, agonizing over technique, and worrying about possibly screwing up, stood in contrast to how easy it really was to shoot these rivets. The forward most few, I was able to just hold my thin tungsten bar on my fingertips, while for the few further back, I cut a wedge of wood matching the angle of the rib and used that to hold the bucking bar in place. I did avail myself of the option of using blind rivets for the two aft most rivets on each side, though – I have no problems taking the slightly easier path there.

Here’s my high-tech way of holding the side of the skin out of the way for bucking access: 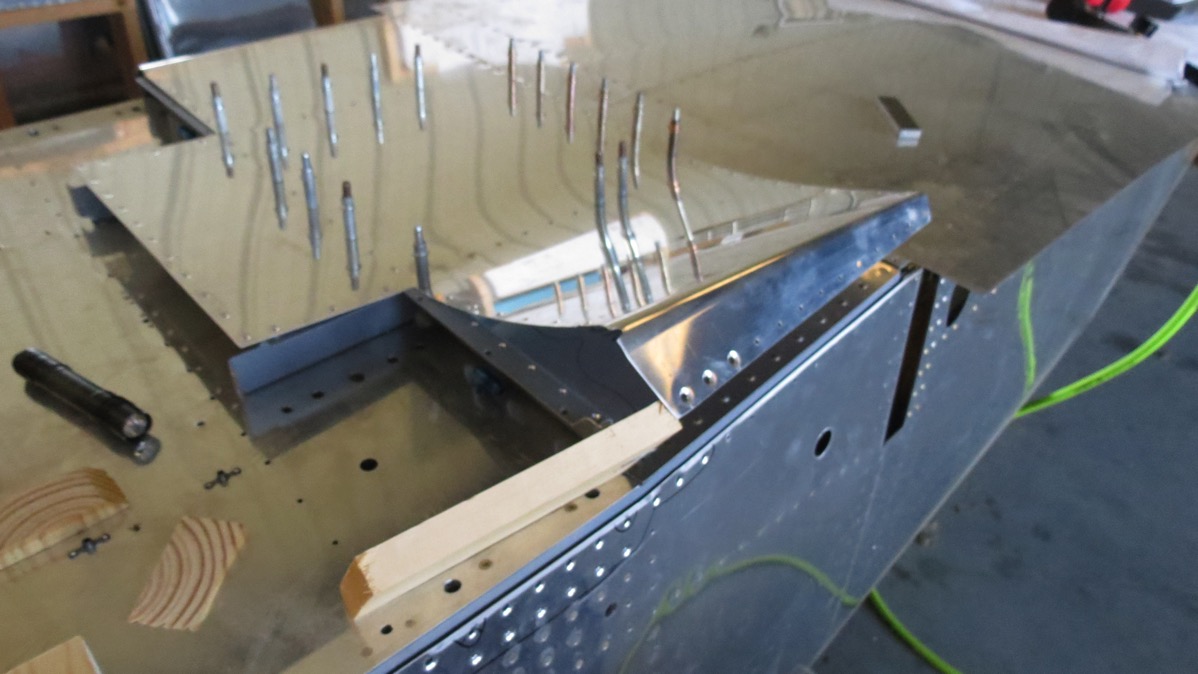 And a couple looks at my wood-wedge bucking setup. This actually works pretty nicely – pushing aft on the wedge (to the right in the photo), exerts upward force on the bar and allows it to move as the shop head forms: 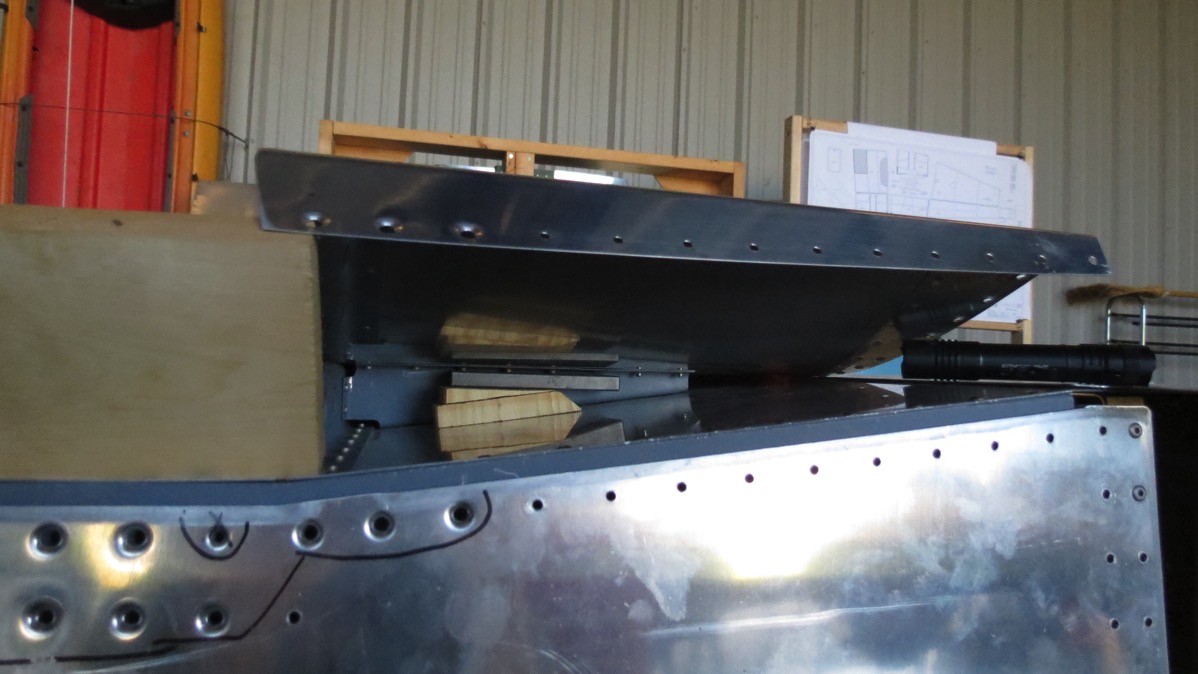 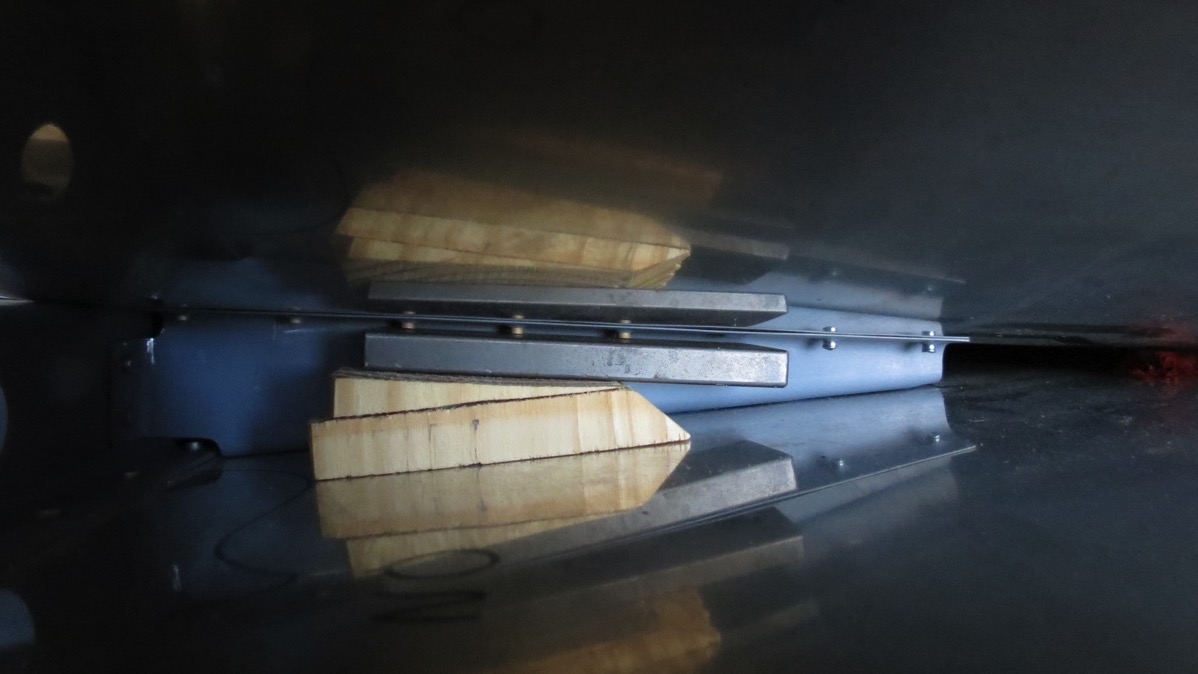 Next, the sides of the skin are tucked into place between the mid side skins and lower longhorns, and clecoed on place along the aft edge (shared with the floor, center section, and mid bottom skins) and along the aft landing gear crossmember. At this point, the skin can be riveted to the gear crossmember – outboard rivets can be accessed with a squeezer, while the inboard ones require more fingertip bucking, reaching under the center part of the skin.

Then comes another fun part – the forward gear crossmember is clecoed to the forward edge of the skin, but nowhere else. This entire assembly gets curled upwards to provide access for bucking these rivets. Once again, some scrap wood worked well as an extra pair of hands: 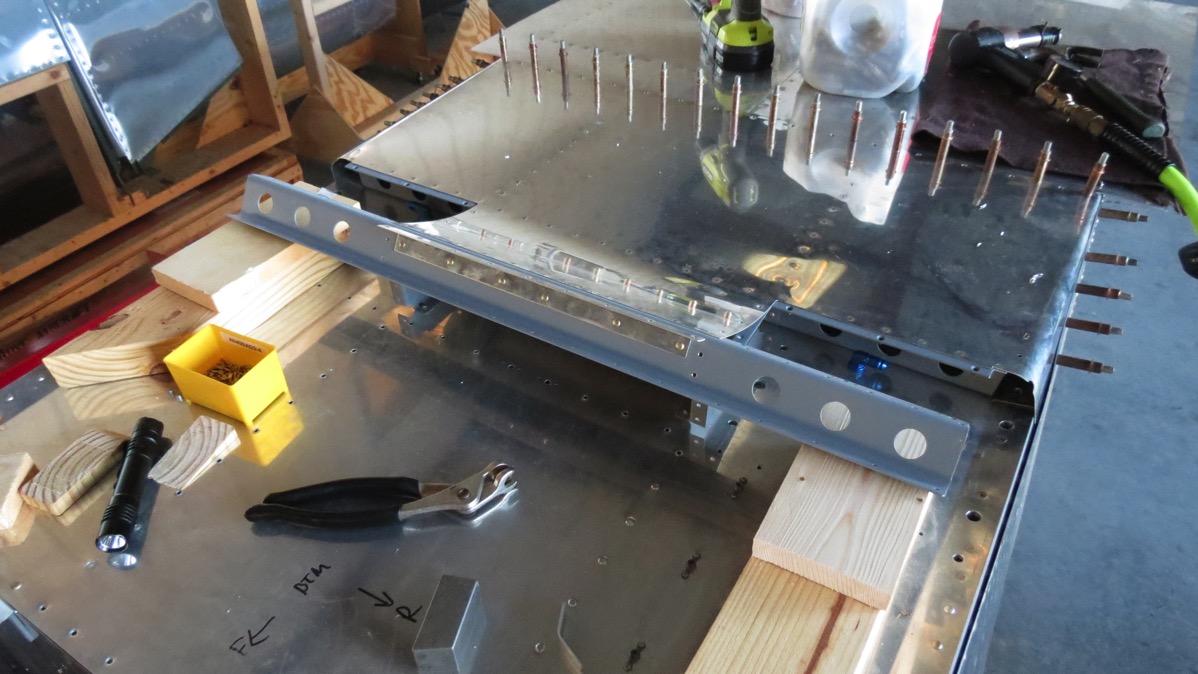 Finally, the forward crossmember can be clecoed to the forward floor, and the few rivets to the intercostal ribs (between the two crossmembers) can be easily squeezed.

At this point, I’d pretty much reached the limit of what I could rivet solo. The rivets along the aft edge of the bottom skin need to be shot, as well as the rivets between the forward gear crossmember and the floor, but these definitively require a second person. The rivets along the lower longeron I can probably shoot myself, but that’ll be another time. Maybe I’ll try and bail out of work a little early one day this week and Josie and I can do some riveting before it gets too late. Once the forward gear crossmember is riveted, I can proceed with attaching the other two forward bottom skins, along with the cooling ramp – which will wrap up work on this part of the fuse. Then it’s interior time…