So I started out today by removing those bottom skins I’d clecoed in place yesterday. Sure, they looked nice and all, but they were in the way for the next steps, which were…um…let me go look at the manual (for the first time in a couple weeks, I might add). Upon consulting the manual, I was a little surprised to discover that there was basically nothing left to do except actually drill the holes for the gear legs. I’m not exactly sure what other intermediate steps I expected, but there weren’t any.

So I went and triple-checked everything, ensuring the tape measures were properly lined up and straight, moving the left until they were equidistant from the tail, and then putting my sheet of plywood in place to check parallel again. Then I verified the positioning of the outboard wear plates (3/16” in from the longeron edge), reverified the gear leg positions, got out the drill and drill bits, checked everything again, etc. It’s always a bit nerve-wracking when committing to something like this – once I drill that first hole, the legs sure better be aligned, because they’re not moving without some major modifications (by which I mean probably rebuilding a lot of stuff).

Following the manual, I started with the 3/8” holes in the outboard brackets. For the drill, I left the air drills in the cabinet and got out my big hammer drill (albeit with the hammer turned off – this ain’t concrete). Copious reading at VAF had taught me that when drilling through these steel weldments, it’s pretty important to use a high-torque drill, and to drill the entire hole without stopping. Stopping means that steel that got heated up by the drilling cools of rapidly and maybe gets some heat treating along the way, making continued drilling unpleasant.

Anyway, the outboard holes went off without a bitch, aside from the aforementioned nerves when committing to that first hole. Next I moved on to the 5/16” holes for the inboard brackets, and this is where things got interesting. I went at the first hole, the drill going through nicely, until abruptly things went wonky and I realized that…the drill bit had broken. Mind you, this was a brand-new bit I bought last year for this specific purpose. 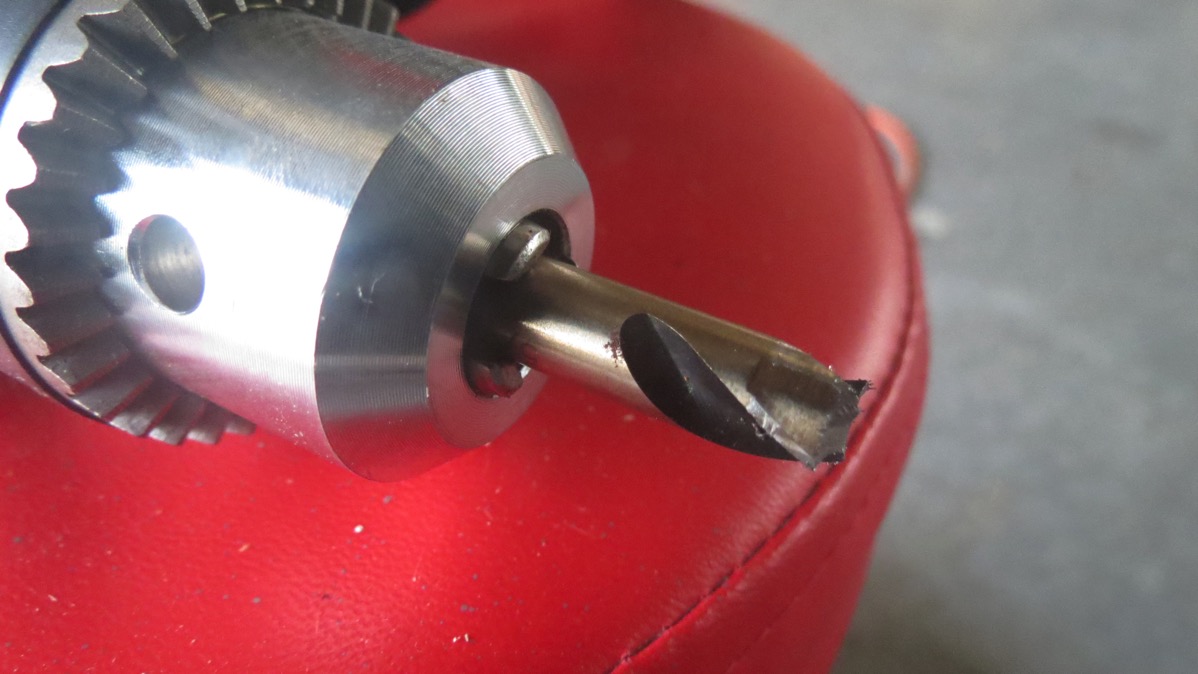 I was pretty upset at first, because I wasn’t sure if the bit had broken through yet, and if it hadn’t – well, the broken part was below the top of the bracket, so extracting it would be pretty interesting. Fortunately, when I crawled under the fuselage to look, I saw that it had broken through. I also saw that I’d made an error of judgment – I’d thought there was nothing below the hole I was drilling to get in the way, when in fact there’s a sort of flange in the weldment that goes across the path of the bit at an angle. The tip of the bit was resting against this flange, so I concluded that the bit had hit the flange, caught a bit, and been deflected sideways, causing the breakage.

Extracting the rest of the bit was easy enough, but I was worried about the damage I might have done to that flange. Surprisingly enough, though, I saw only a single tiny nick – not what I was expecting at all, but in a good way. Well, that was a bit of a relief…

Fortuitously, when I ordered these bits for the landing gear, I bought two of each. Always good to have a backup on hand, right? I was certainly proving it now. I removed the broken bit, installed the backup bit, and moved on with my day. This time, I anticipated the possibility of hitting the weldment when I broke through. I didn’t have a drill stop for a bit this large, but the side handle on the hammer drill allowed me to position my left hand such that it could stop the handle when I broke through and prevent overtravel.

So again, I started drilling…and I got an almost-exact repeat of the previous attempt. I calculated I was almost through when the second bit broke! This time I knew I hadn’t gone far enough to contact the weldment, and a look under the fuselage confirmed it. So now I was just confused…the only thing I can figure, in retrospect, is that the bit was binding at the moment of break-through, hard enough that the high-torque drill just snapped it. I’m still not sure why this wasn’t an issue with the larger bit – though I imagine the larger diameter would make it a bit stronger.

In any case, the good news was that I got two of the four holes drilled, but the bad news was that I’d now destroyed both of my bits. No more 5/16” holes today. I think this time I’ll order four of the things, so I’ll still hopefully have two left over after I’m done.

I did go ahead and drill the two remaining 1/4” holes on each outboard wear plate – since the bracket holes had been drilled, everything was set in place and there wasn’t any reason not to drill the holes. There are also two holes in each inboard wear plate, but they have to be drilled from inside the fuselage, through prepunched holes in the weldments. Not sure yet if I’m going to drill those from below, with the fuselage inverted, or figure some way to drill them after the fuselage is upright again. I’ll have to think that one through a bit.

Anyway, here’s a look at the fully-drilled mounts for the right gear leg: 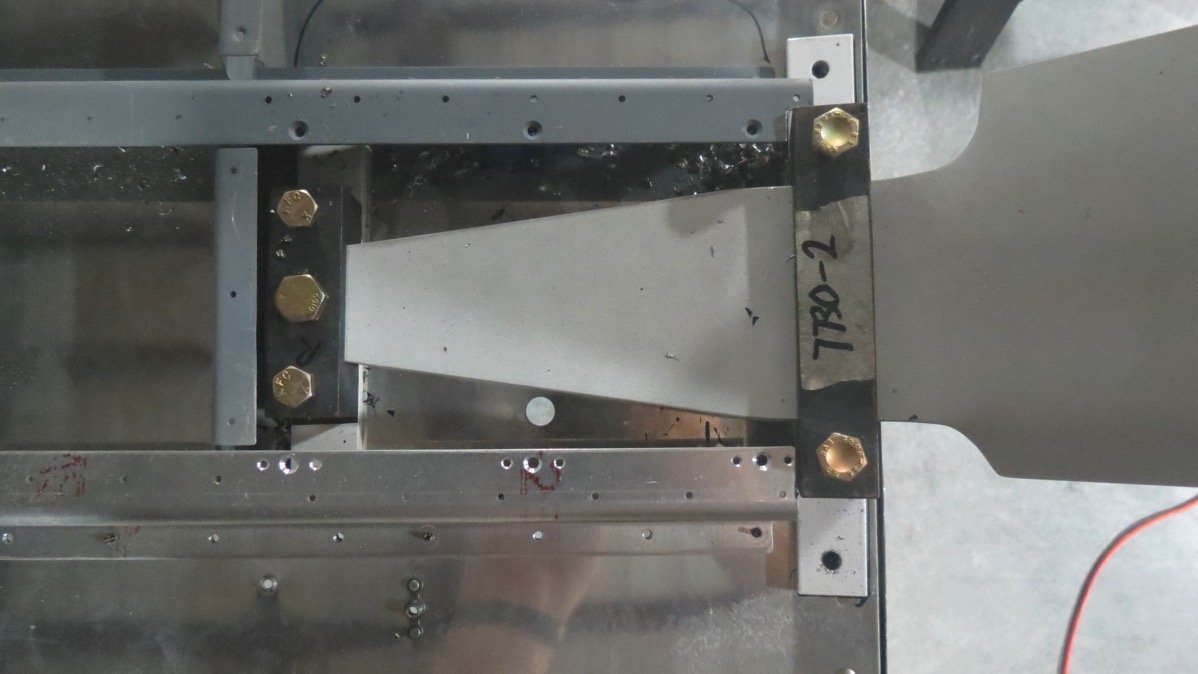 I’m not sure if I’ll be doing any more work until next Monday now. This coming weekend I’ll be at the MotoGP race in Austin, and most of this week will be waiting for new drill bits, followed by getting all my gear together to camp trackside. But I took the following Monday off, so I ought to be able to make that into a nice work day, I think…