I started out tonight by finishing attachment of the lower longerons to the forward floor. Last time, I slipped them in place, clecoed them, and installed the flush screws that go inside each gear tower. Tonight, I installed the four bolts at the forward end of each one (which go through the lower engine mount weldment as well) and then shot all the rivets to the forward floor. Most of these were easily done with a squeezer, but the ones near the gear towers were significantly less fun. In order to get decent access for using the rivet gun, I opted to roll the forward fuse assembly on its side: 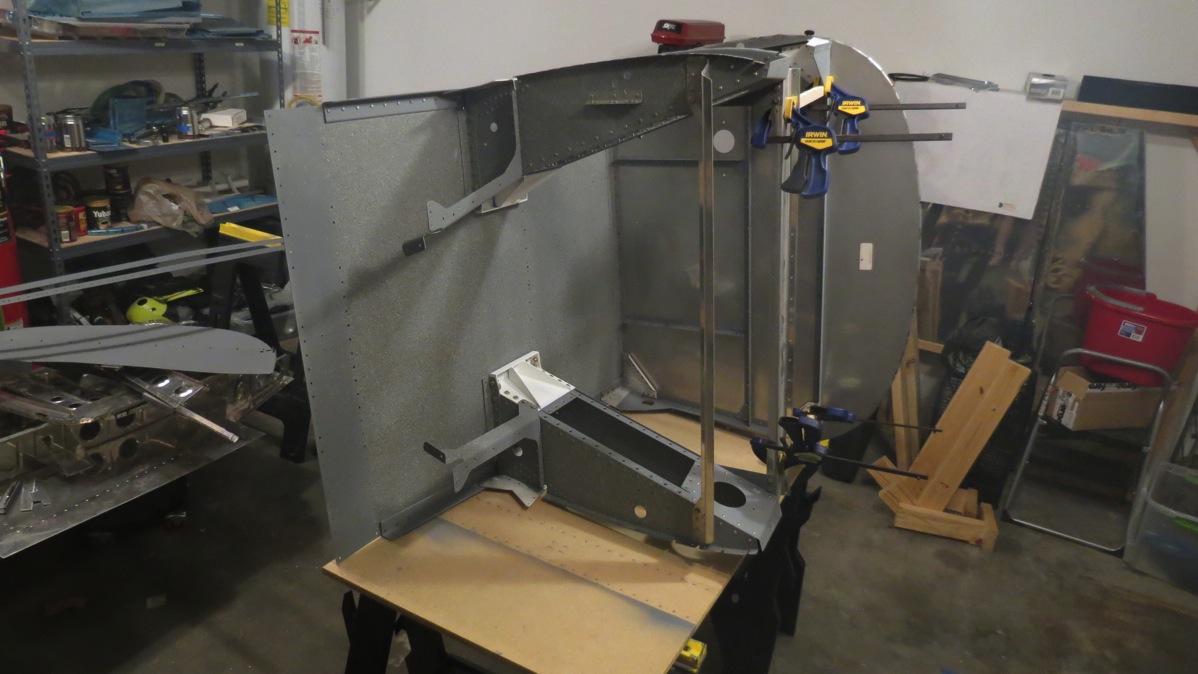 Even then, it was still challenging, but I only fouled up one rivet to the point that it had to be drilled out.

After moving the forward fuse to the workbench, I set the center section in place and clecoed it at the bottom flanges. From here, I was to attach the mid-cabin braces, using a combination of rivets and bolts (one bolt per brace). Fortunately, I did the bolts first, because, well, the matching holes in the braces were way undersize for the called-out AN4 bolts. They looked about the right size for an AN3 bolt, but this seemed worthy of some quick research. Sure enough, they really are supposed to be AN4 bolts; the holes in the braces need to be drilled to final size, for whatever reason. So I went and removed all the clecos and took the center section right back off again. This allowed me to confirm that the matching holes in the spar carry through were sized for AN4.  After drilling the brace holes to the proper size and deburring them, I once again set the center section in place.

Inserting the bolts into the holes was easy enough. Gaining access to install the washers and nuts was…not. This required getting my hand in between the forward and aft web of the center section. Access from the ends was blocked by the spacers I installed way back when to maintain proper alignment in the center section. There’s a hole in the center for the control column to pass through, though. It was just barely enough for my meat paws to fit in, and get the washers and nuts installed, but I was highly skeptical of my ability to get a wrench in there to hold the nuts while I tightened the bolts. I ended up removing the upper bolt in each spacer, allowing me to pivot it out of the way while I held the wrench and torqued each bolt.

Next were the rivets attaching the upper flange of each brace to the center section. There’s a -4 rivet and two -3 rivets in assembly with a nutplate in this location. I’d previously countersunk the spar web for NAS rivet for the nutplates, which was dumb, because I have no NAS rivets long enough for this location. So I had to dig out the countersink cage and enlarge the countersinks for regular old -3 flush rivets. Then I got this set of rivets squeezed.

That leaves one more rivet on each brace, which goes through the same flange as the bolt, and into the spar web. Best access to buck these will probably be through the ends of the center section, which means removing the end spacers…again. By the time I came to this realization, it was nearly 11:30, so I decided to quit for the night. With the spacers out of the way, I think access for bucking these won’t be too bad, though I will have to do it basically blind. But once they’re done, I can add the seat rib assembly…and then this thing will really be taking shape. There will be a lot of two-person riveting in the near future…

Here’s the forward fuse with the center section joined: 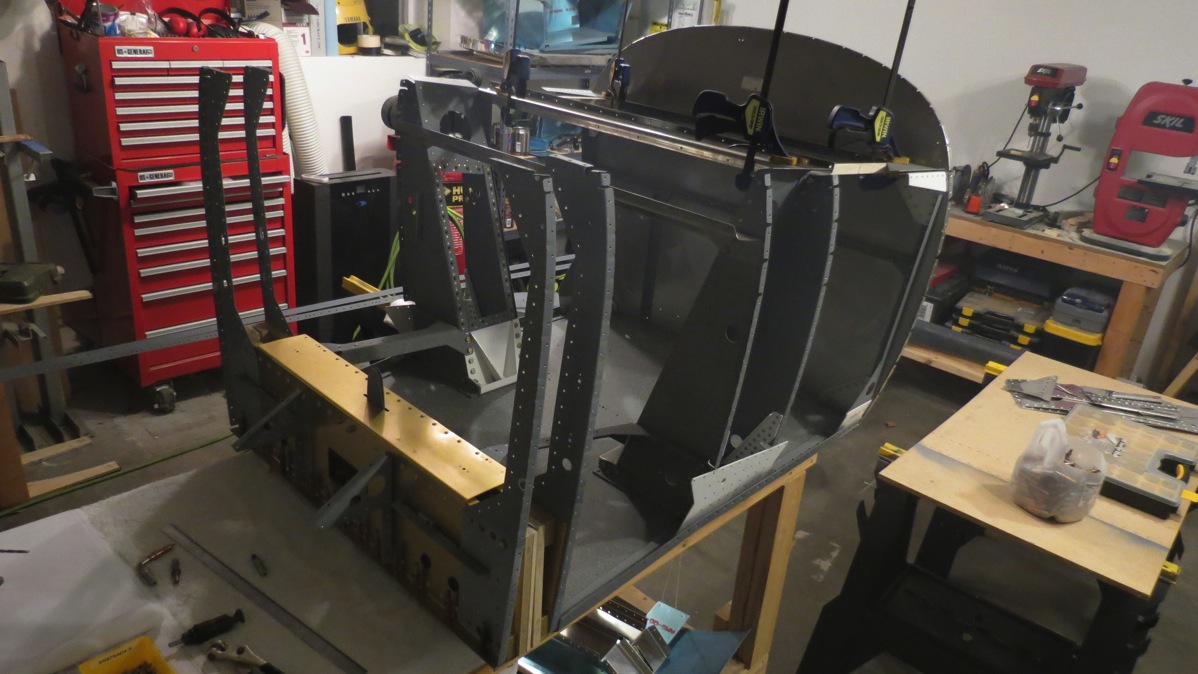 And a kind-of random close-up of the rivets joining the upper portion of the brace to the center section: 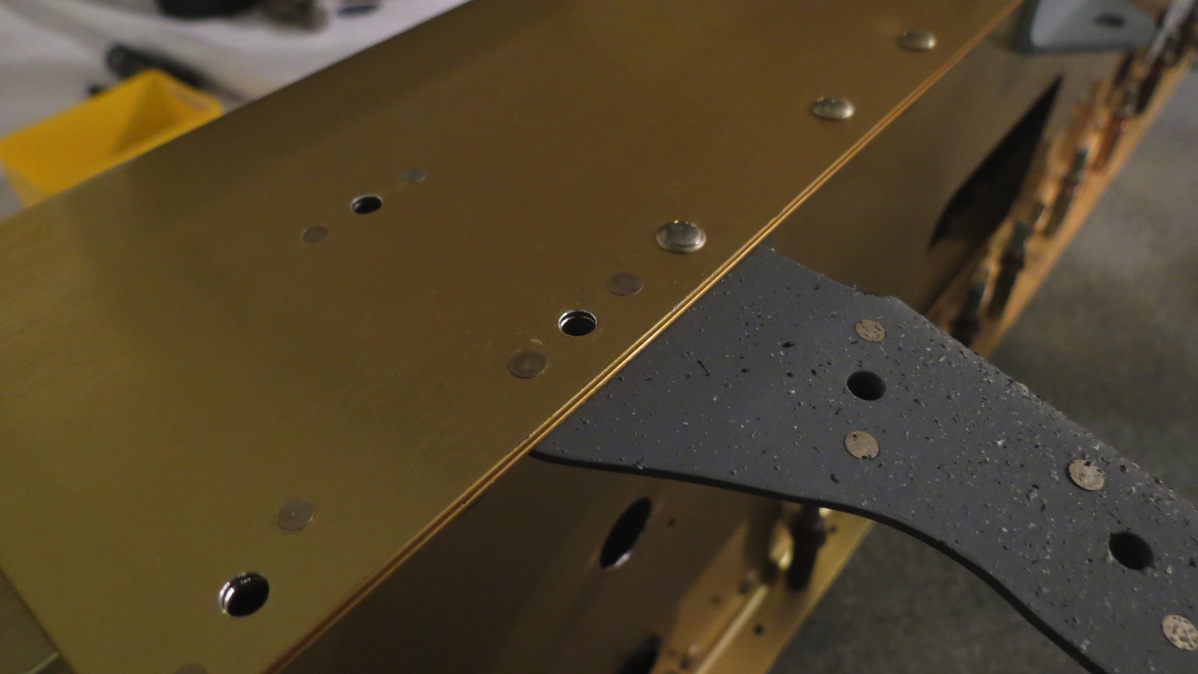