So my rearrangement idea from the other night appears to have worked out well. The crux of the idea was something I’d rejected before: putting the wings on the same wall where the horizontal stab is hanging. I didn’t think it would work before because the upright wings are higher than the bottom of the stab as it hangs. But in reality, the wing wouldn’t be sitting flush against the wall anyway. The real obstacle would probably be the elevator control horns, since they stick out a few inches, but they just so happen to be at the same spot where the ailerons are on the wings, and the ailerons naturally hang towards the inside of the wing cart, thus providing clearance with the elevator horns. It seemed workable just from poking around with a tape measure.

So today I rolled everything that wasn’t nailed down out into the driveway. That gave me the chance to sweep up a ton of congealed spiderwebs, sawdust, and aluminum chips – the cleanup was sorely needed. The wings ended up fitting very nicely. The actual main potential issue wasn’t the control horn, but the clecos holding the bottom wing skins in place, which threatened to make contact with the elevators. So I added some little standoff pieces of the wing cart, which prevents the wings from getting too close to the elevators: 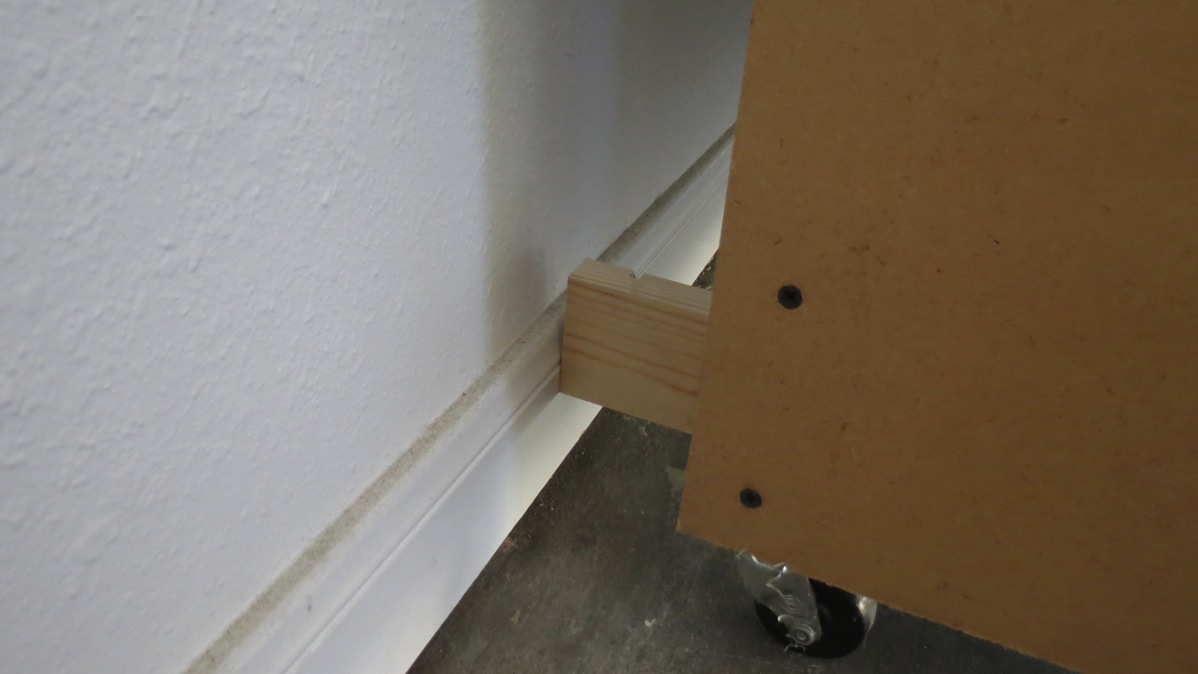 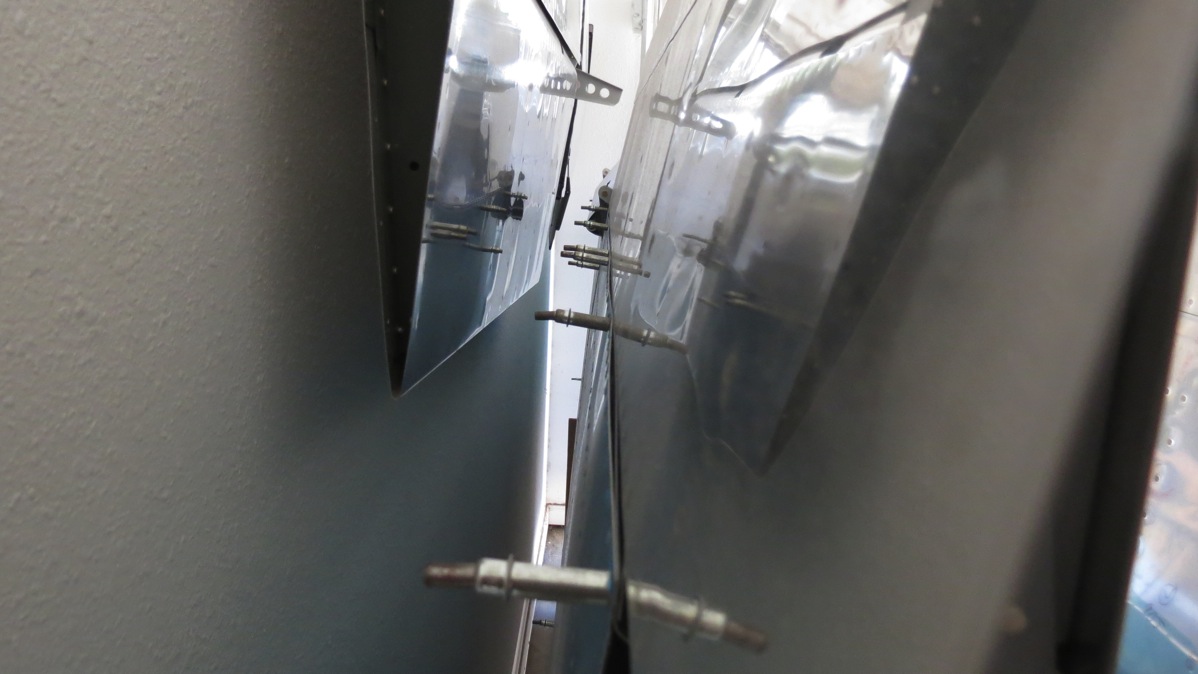 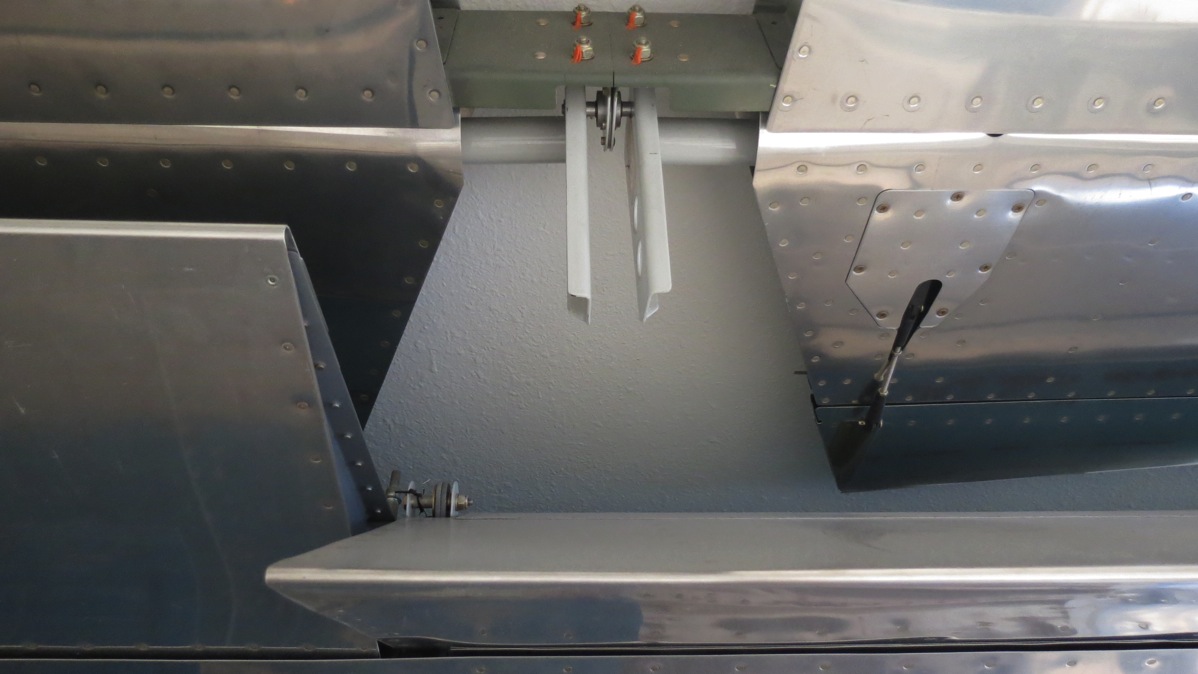 This new arrangement basically put all the bulky stuff in two corners of the garage, leaving the other two corners open for the length of the fuselage. Here’s a photo with the longerons on the floor to roughly mock how the fuse will sit: 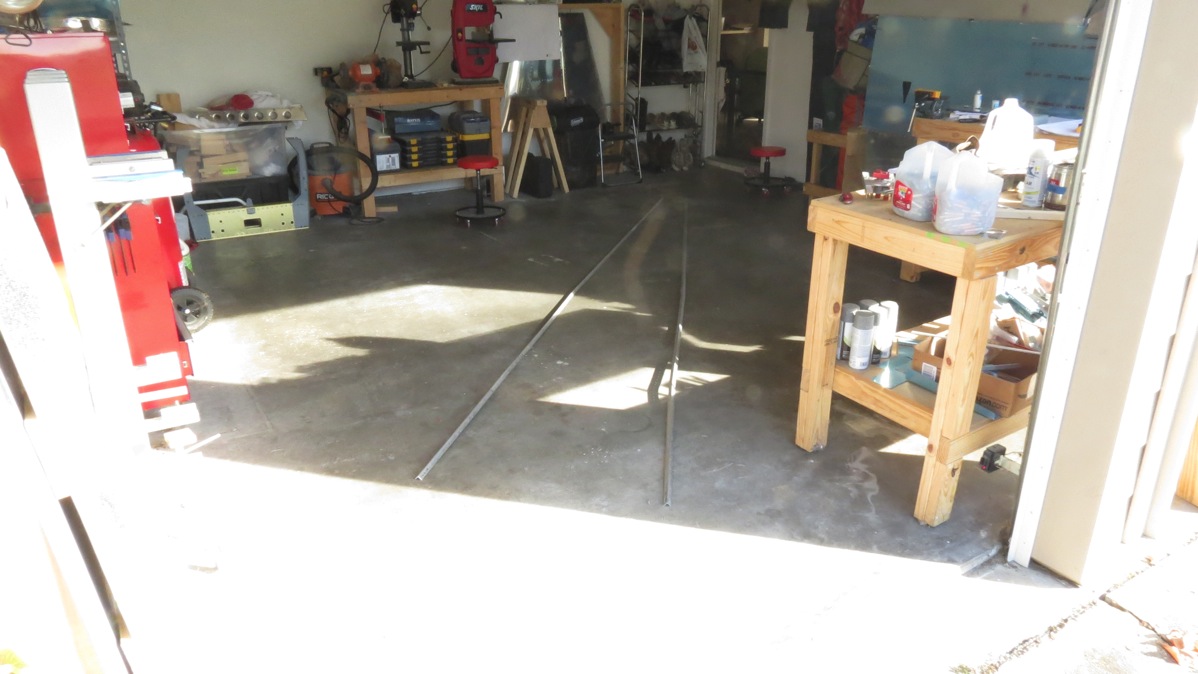 It’s better than before, but still not as roomy as I’d like it to be. Getting rid of the workbench on the right side of the photo would help, but then I’d only have one workbench. Not sure if that’s workable or not; if nothing else, I’d have to find storage for all the stuff I have on the shelf under the bench!

I intend to put the fuselage in a rotisserie setup once it’s together to make it easier to work on the interior. Most people do this by adapting an engine stand to attach to the engine mount points on the firewall, and just resting the tailwheel spring in a notched saw horse or something. I’m thinking I may opt to tie the engine stand to a tail stand that’s on caster, so the whole rotisserie is a unit. Then I could move the fuse around a bit if needed to get extra space in a particular area. I haven’t completely thought this through, so it may not be workable, we’ll see…

Once I got the garage back together, I went back to prepping for countersinking. I’d originally intended to take the parts I marked earlier in the week and countersink them one evening, but that didn’t happen. So now I’m going to combine work even more than before; instead of countersinking, I ask marked the main lingering and aft mid and bottom longerons for countersinking. This way, I’ll be able to basically do all the fuselage countersinking in one work session. Along the way, I deburred all those parts (the 16’ long main longerons were especially fun here) along with a few other random things lying around. Tomorrow will be Countersinking Day. After that, there’s lots more deburring and dimpling, and then it’ll be time to start riveting some of this stuff together!