Throttle! (capitalized cause it's finally done)

Well, I think I can finally put this throttle hilarity behind me. Funny how this started out as “let me take care of this one thing before I move on with prep work.” And that was about three weeks ago.

I started out today with a few more iterations of gradually enlarging the passthrough holes. After the second attempt, I was close enough that instead of actually removing the quadrants again, I just moved the linkage out of the way and filed the edge of the hole with the linkage in place. And finally, I got what I wanted: full movement of the throttle with no rubbing of the linkage.

OK, so the final piece of the throttle puzzle was fabricating a new cover plate for the forward throttle. As I probably mentioned before, there’s a cover plate included with the kit, but it seems to be pre-cut for a three-lever quadrant. For whatever reason, the cutout in the thing is significantly wider than my quadrant. Making this piece was actually kind of fun, though there was some tedium towards the end.

To start with, I cut a form block out of scrap wood, using the original cover plate as a template to lay out the cut lines. I also used sandpaper to round the corners a bit where I’d be bend material later, to help promote an appropriately gentle bend: 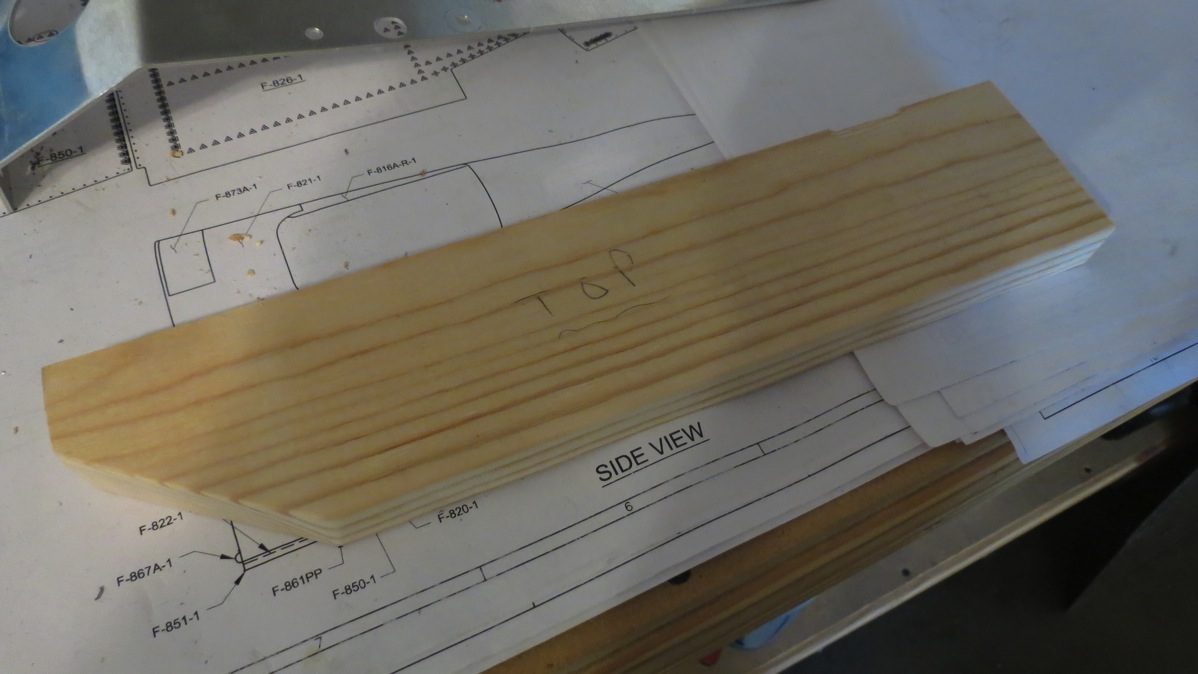 Checking fit of the form block in the throttle quadrant mount: 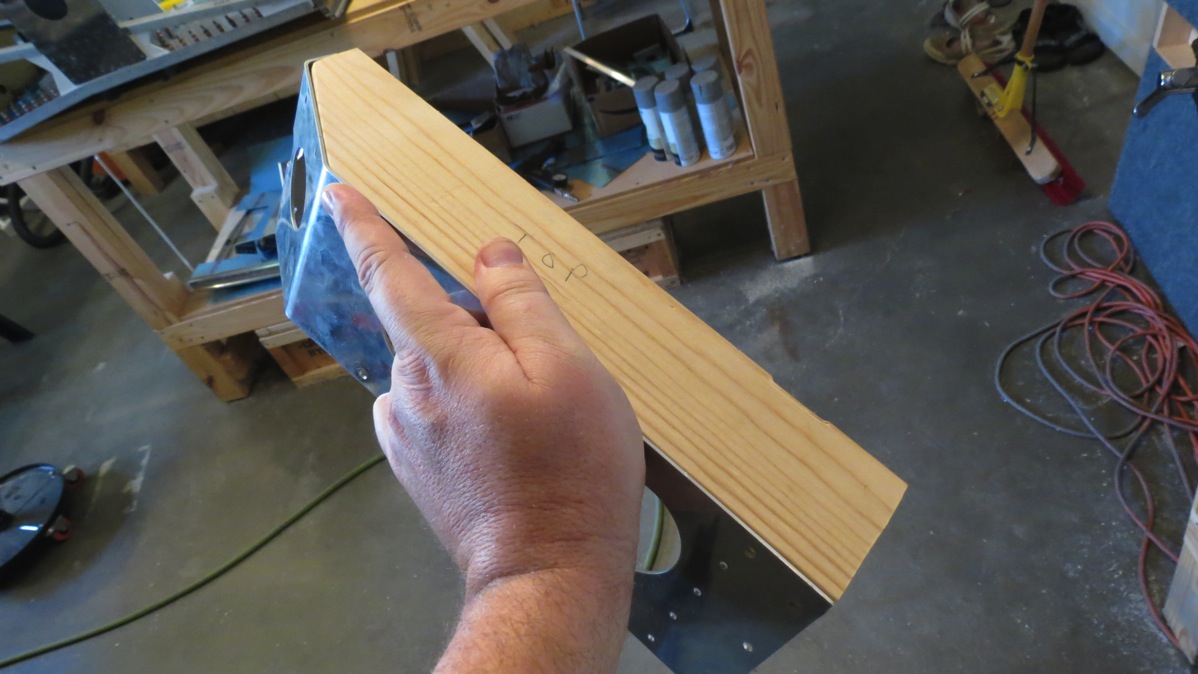 I used the block itself to make the initial marks on my sheet stock, then marked off ~7/8” for the flanges: 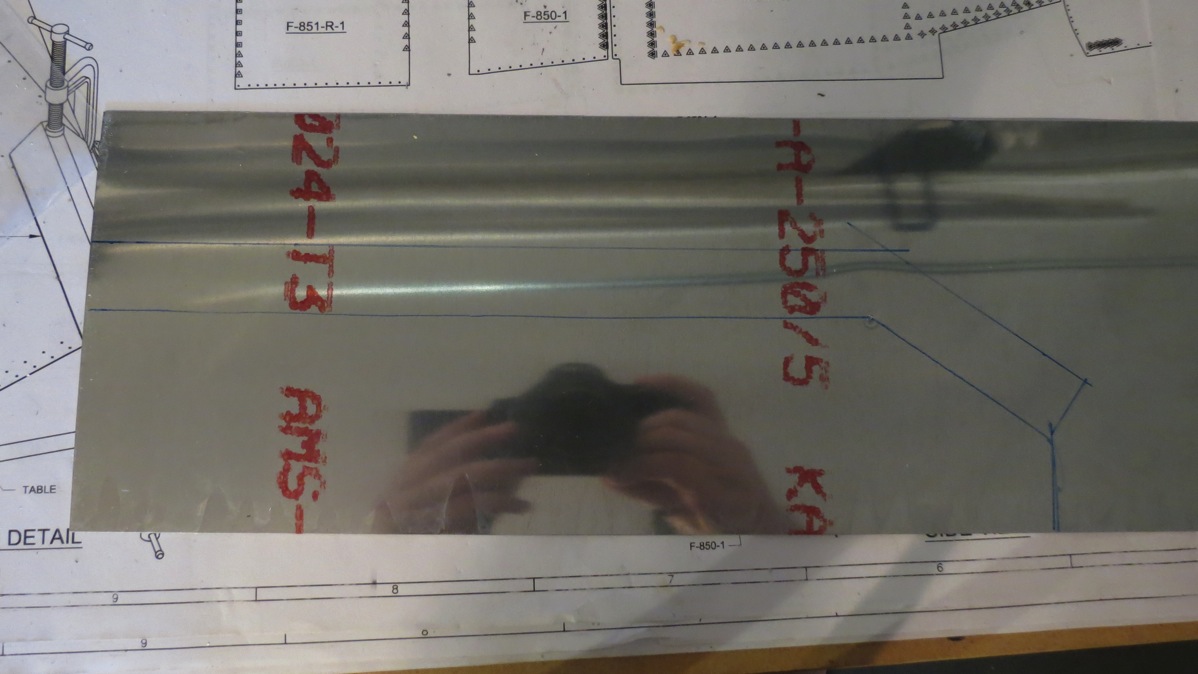 For the corner of the plate what will have flanges, I punched and drilled a #12 hole to ensure there’d be no sharp corner here. This also adds some relief to account for the bend in the mount plate, which is a bit rounded. Then I used the edges of the hole to mark cut lines for the ends of the flanges: 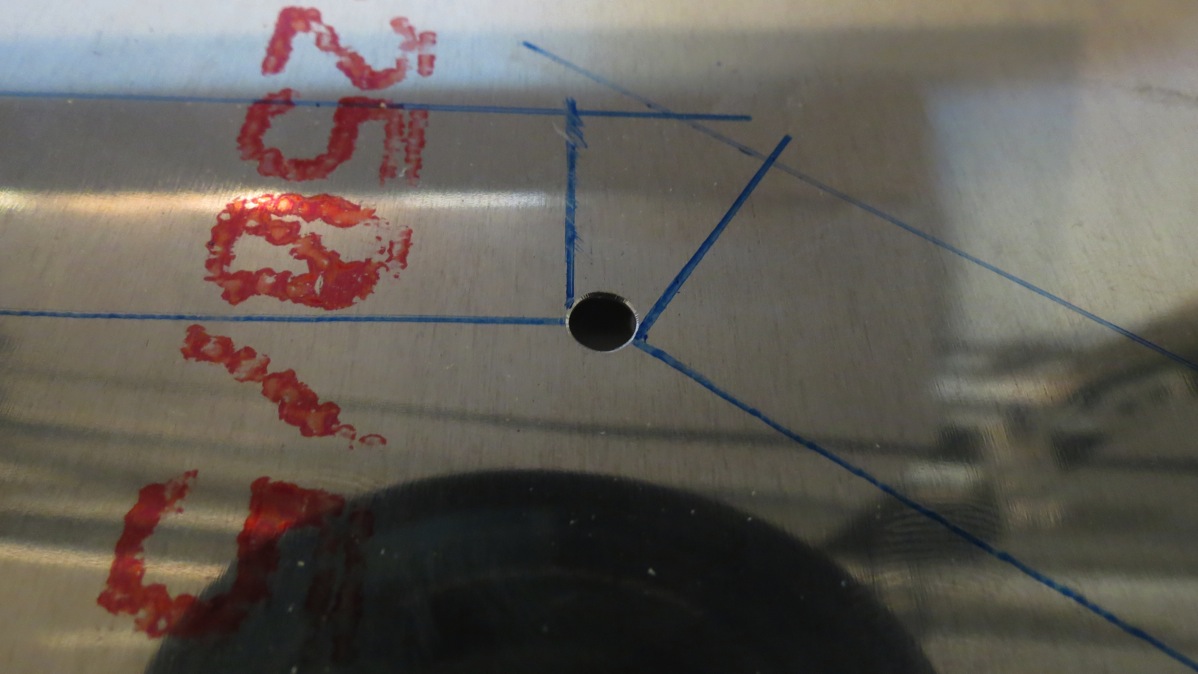 And here’s the piece after making rough cuts, filing down edges, and smoothing everything with the bench grinder. I’ve also drilled two tooling holes, which are used to positively locate this piece on the form block. These two holes are in the area that will be later removed for the quadrant itself: 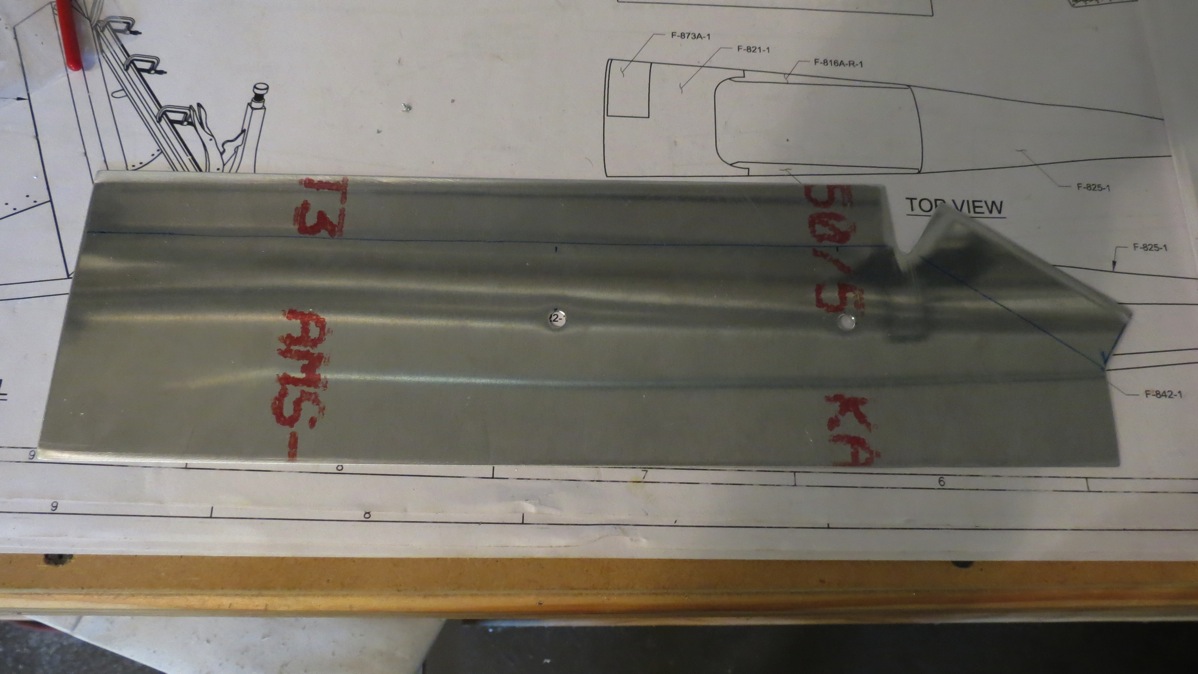 Here I’ve bent the flanges and made notches to fit over the throttle mount spacers. I’ve also test-fit this piece with the quadrant attached to the mount (sans levers), and drilled the screw holes where it will attach to the mount. And finally, I’ve marked the cutout for the quadrant. The outermost lines are the actual perimeter of the quadrant faceplate; inside that are my expected cut lines, inset 1/8” on the sides and 1/4” on the ends. Inside the cut lines at the corners are center marks for #12 holes that I’ll drill to serve as the corners of the cutout: 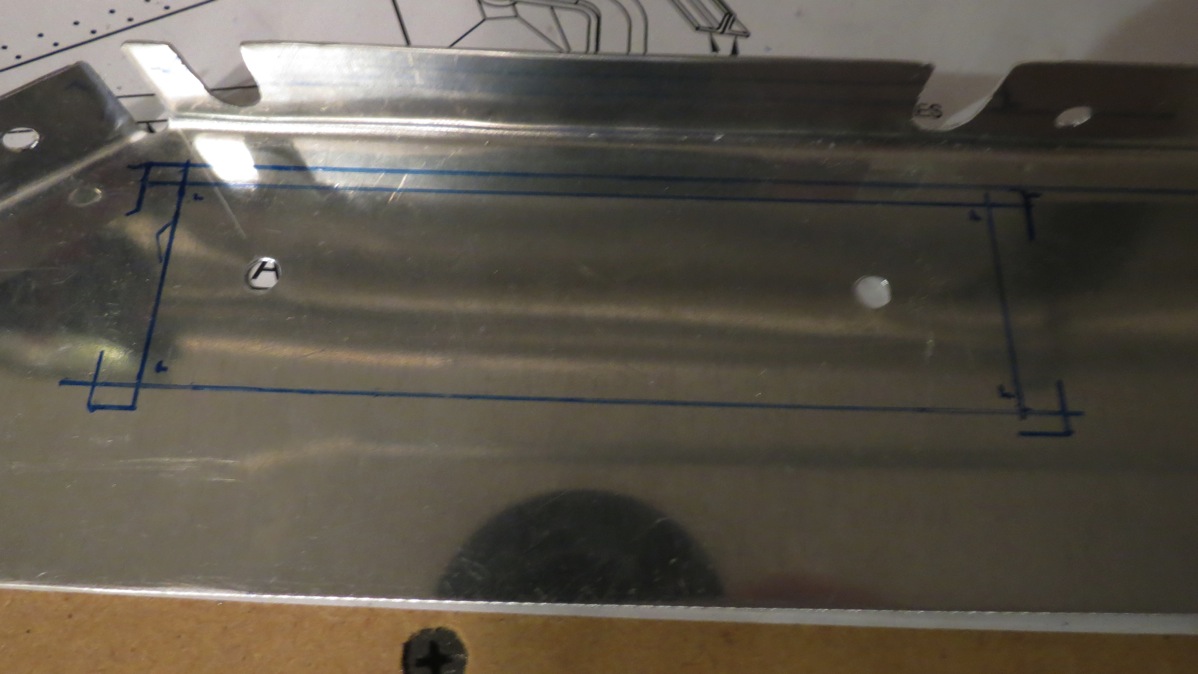 This was where things got fun. After drilling the corner holes, I started making cuts with a Dremel cutoff wheel. I made the short cuts at the ends with no problem, but I was just starting one of the long cuts when the cutoff disc jammed up and completely stopped the Dremel. Before I could switch it off, it turned off on its own – and notably, refused to turn on again. Not sure if I blew some internal fuse or what – after a quick Google session, I checked the motor brushes and they seemed OK, but I never could get the thing to turn back on.

So I just proceeded with my rough cuts, using snips instead. I used a unibit to open the tooling holes up to the largest possible size so I could get the snips in to work with. This worked decently, but I wasn’t able to cut as close to my cut lines as I could have with the Dremel, so when it came time to file the cut lines out to their final locations – well, let’s just say there was l-o-t-s of filing to be done. That was the tedious part I mentioned earlier. It doesn’t help that it’s hard to figure out how to clamp this piece for filing some of the locations.

But al that filing paid off, as the end result fits quite nicely: 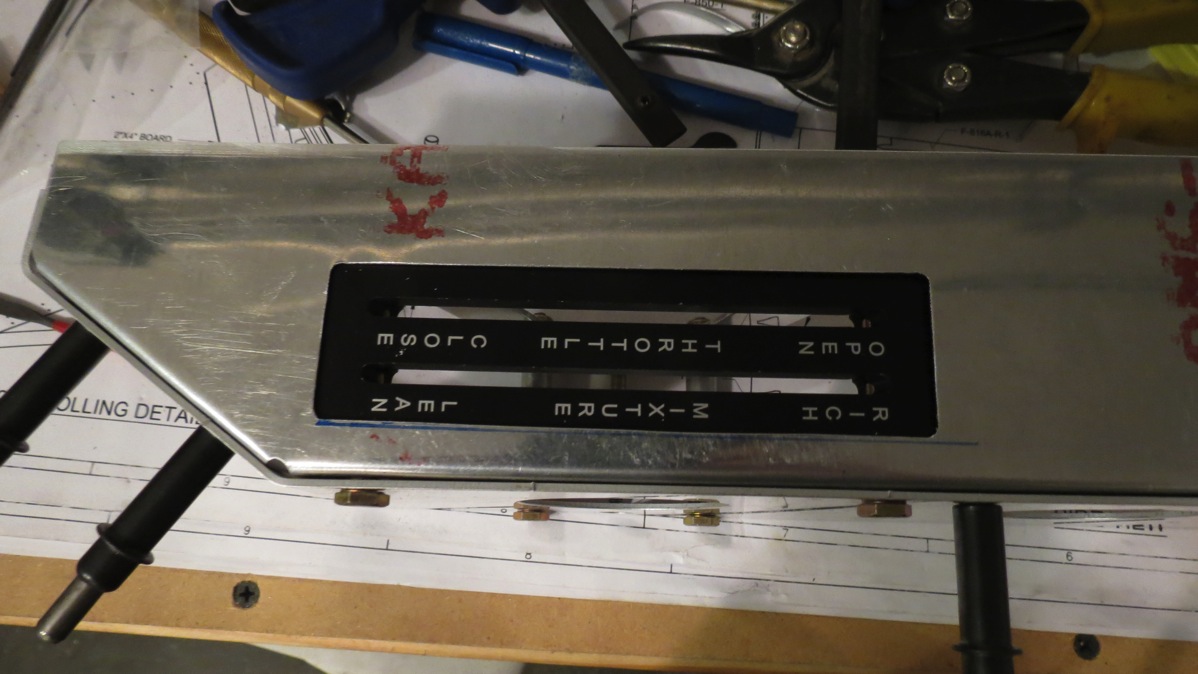 The only thing left to do was to reassemble the throttle and try fitting everything in place. But first I had a modification to the throttle. Since I’d moved it outboard a bit to accommodate the linkage, the pivot bolt was now too short to fit the friction lock lever. The bolt is retained by a little clip riveted to the inboard quadrant plate, so I had to drill out those two rivets. I had just the right length AN bolt lying around, but I noted that the original bolt had a much longer threaded shank than the AN bolt. So after riveting the new bolt in place, I got out the tap & die set and added another inch or so of threads to the new bolt. And finally, the whole thing went together. (…again…)

Test-fitting everything in place revealed that I needed relief notches in the outboard corners of the cover plate, to accommodate the flanges of the center section bulkhead and the gear tower. Pretty simple modification really…and then finally, I had everything in place! 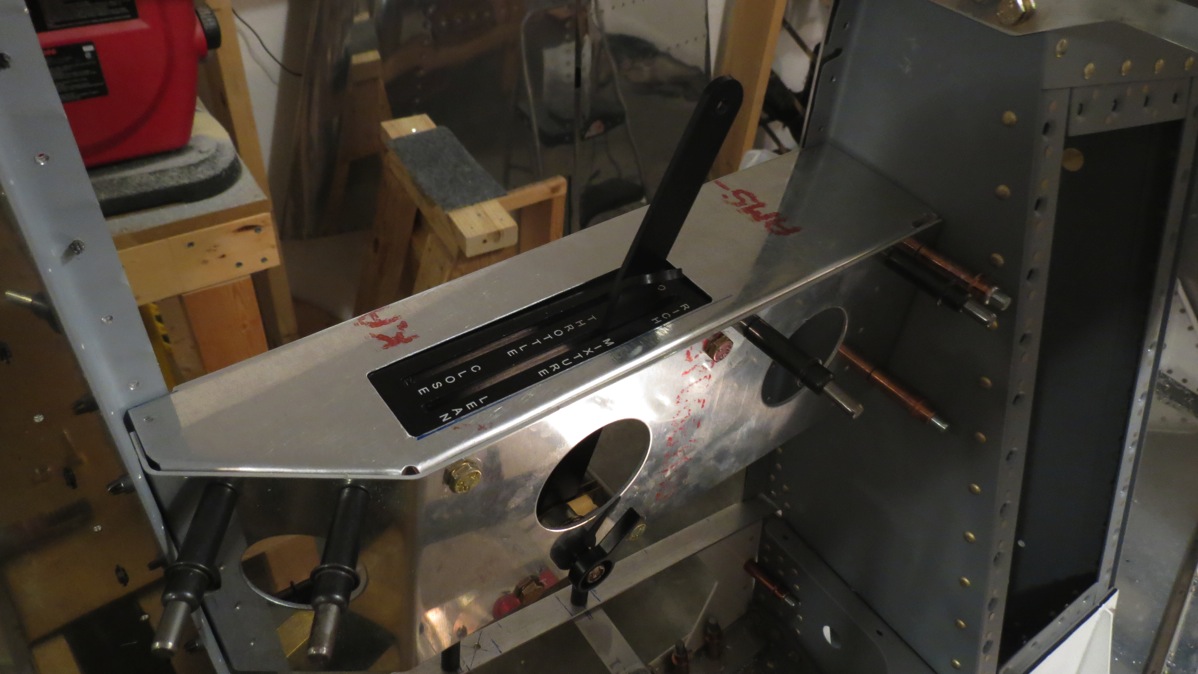 The only thing left to do on that cover plate is drill the screw holes on the outboard edge. There’s a piece of angle mounted to the forward side skin that the cover plate will attach to – the fun part will be figuring out how to mark and drill those holes. Next time, I suppose I’ll cleco the forward side skin in place again, both to try and get those screw holes drilled, and to perform a final check of the linkage with the additional bracing of the skin.

But finally, the end is near!