So I didn’t get a whole lot done today in terms of shop time, but I’m well on the way to getting started on the monumental task of preparing all these parts. First off, though, I took a second look at the aft bottom skin. I made a few guide marks, removed the skin again, and took the Dremel to it. This time, it fit in place with good clearance from the mount all around. Here’s the final state, from below: 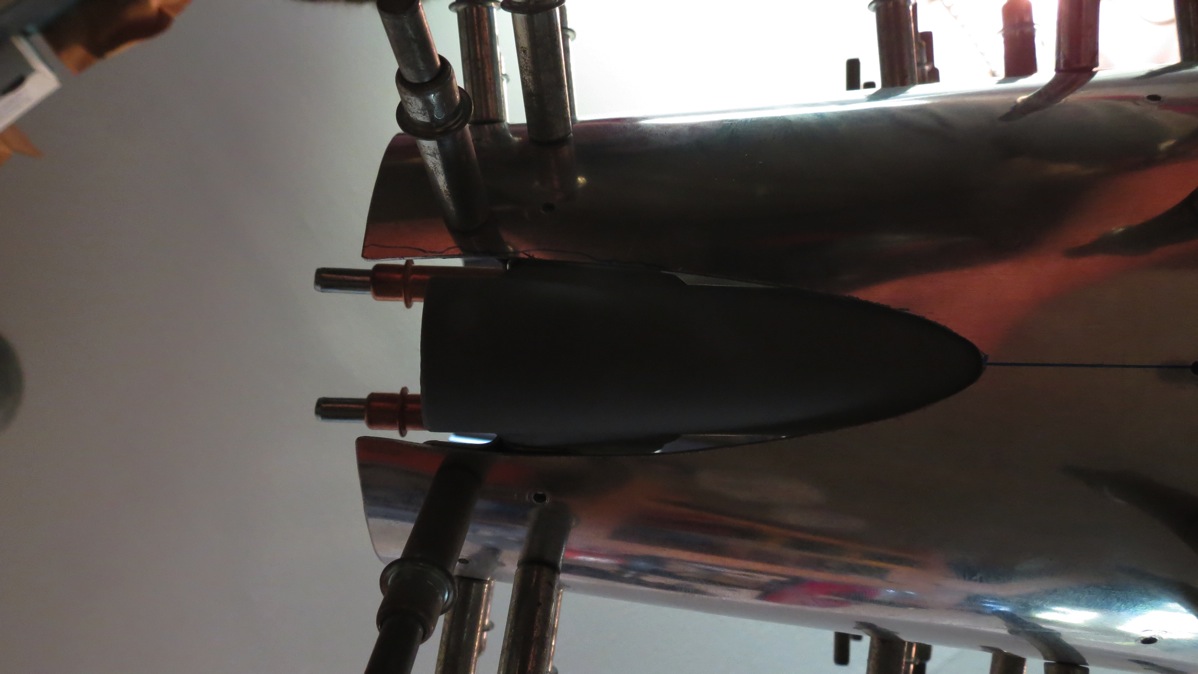 And with the tail spring in place for a sort-of big-picture view: 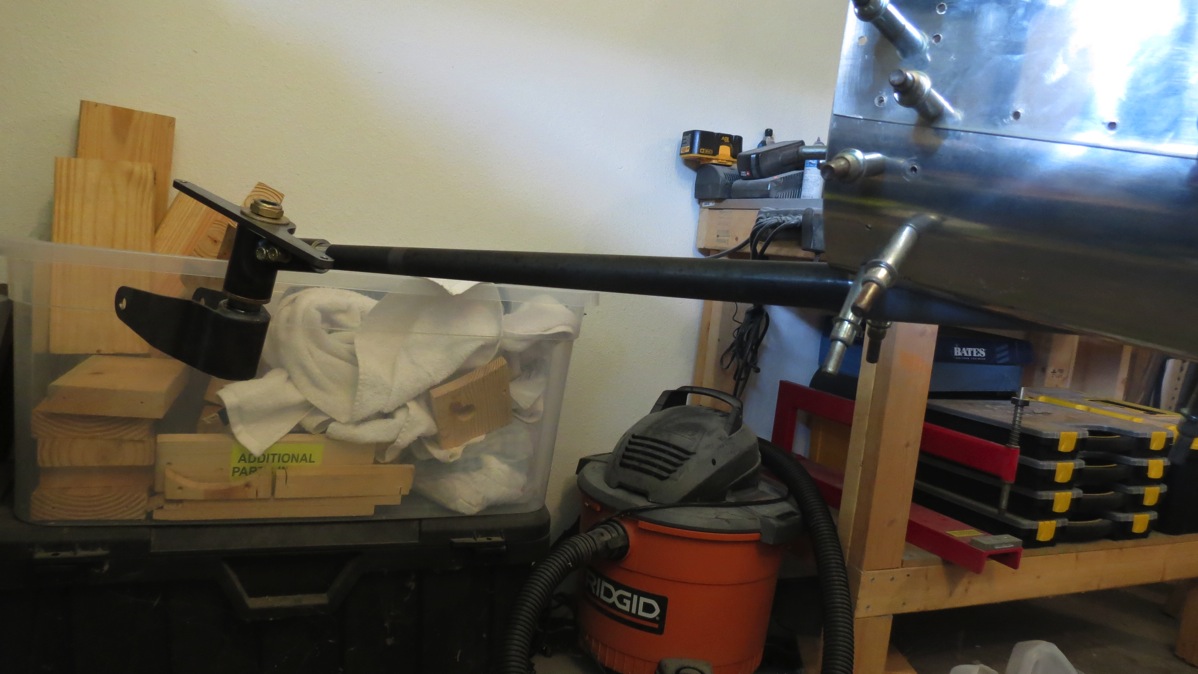 Here’s another view of the mount and the cutout, taken later in the afternoon after I’d removed the aft bottom skin and the bulkheads as a unit. The edges of the cut are still pretty rough; once I finish pulling this apart, I’ll file them smooth and deburr and so forth: 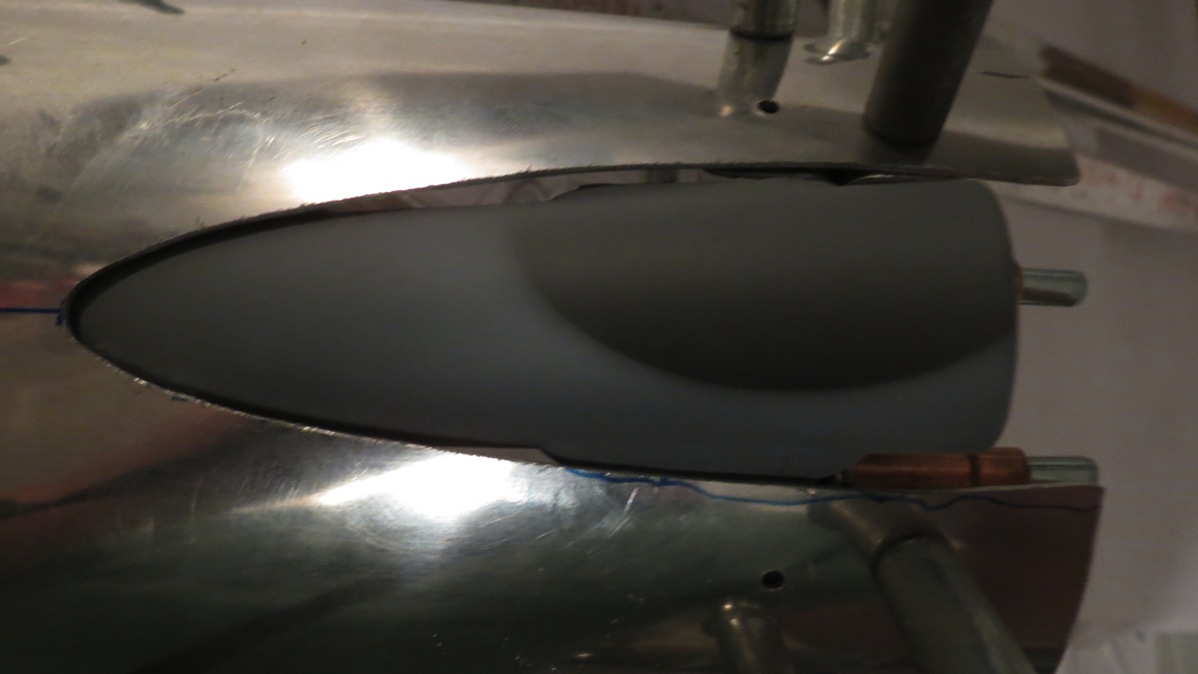 There’s a lot more clearance around the mount than I would have preferred here. The weld on the aft portion of the mount, where it attached to the bulkhead, was the big clearance issue, and rather than shape the opening to fit around those, I was trying to maintain the smooth curve of the cutout. So by the time I had clearance around the welds, there was a ton of clearance everywhere else. But again, no one is ever going to see this, and it doesn’t really look that bad, just not-as-good-as-it-could-have. Not bad enough to need a new part, that’s for sure.

Trimming that skin was the last task prior to beginning disassembly, but first I went back through the instructions to review and ensure I didn’t miss any match-drilling. I was particularly concerned with the turtleneck skin (top portion of the tail); this was never match-drilled to the bulkhead tops. I was pretty sure it wasn’t called for but I wanted to be really sure – and it wasn’t. It’s probably not too surprising, since that piece won’t go back on again until much later. So, assured that I was done with it, I removed the turtledeck: 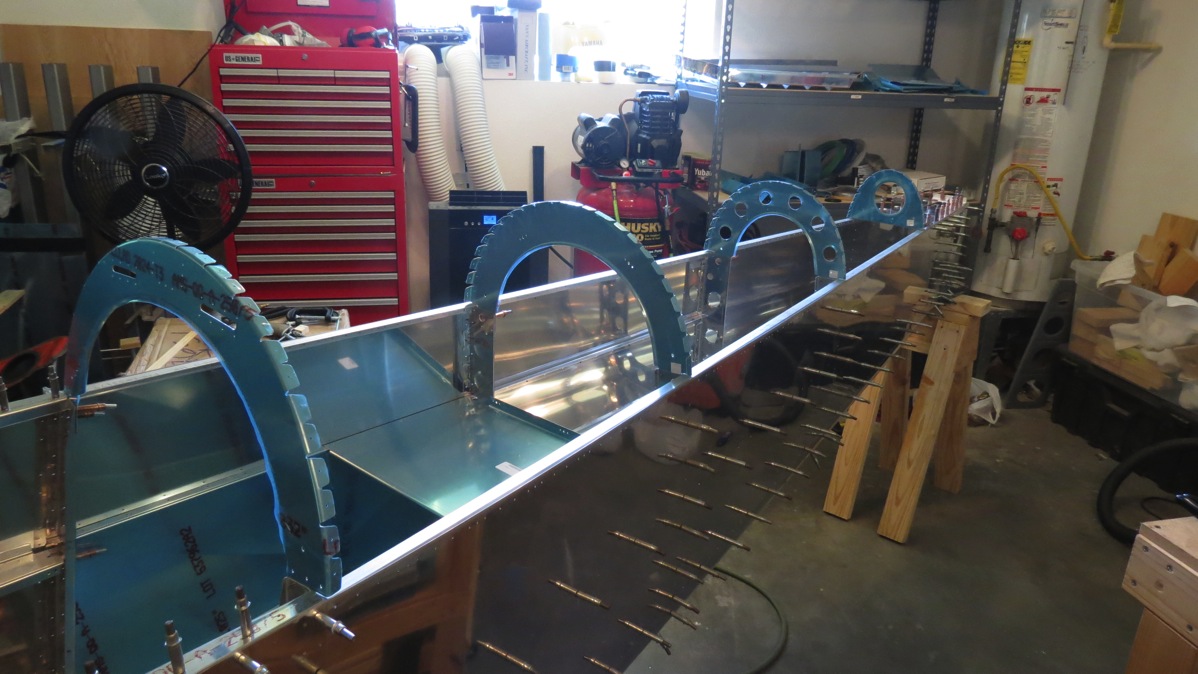 The tail cone contained an absolutely ridiculous amount of aluminum chips from all the longeron drilling: 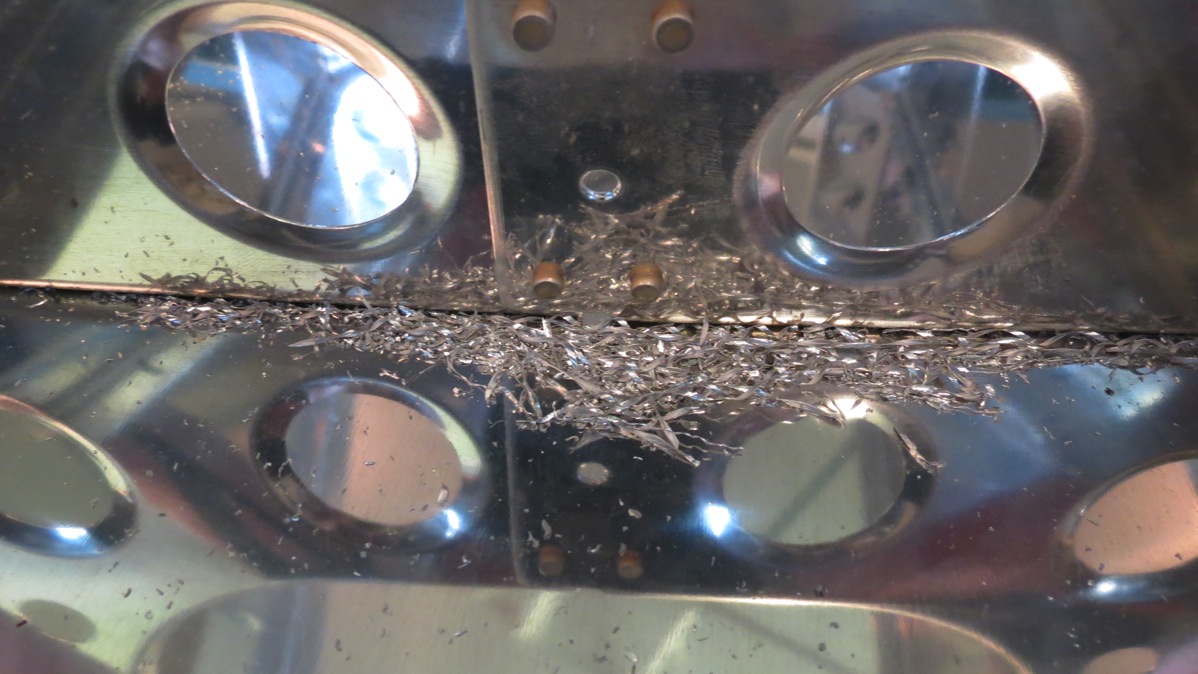 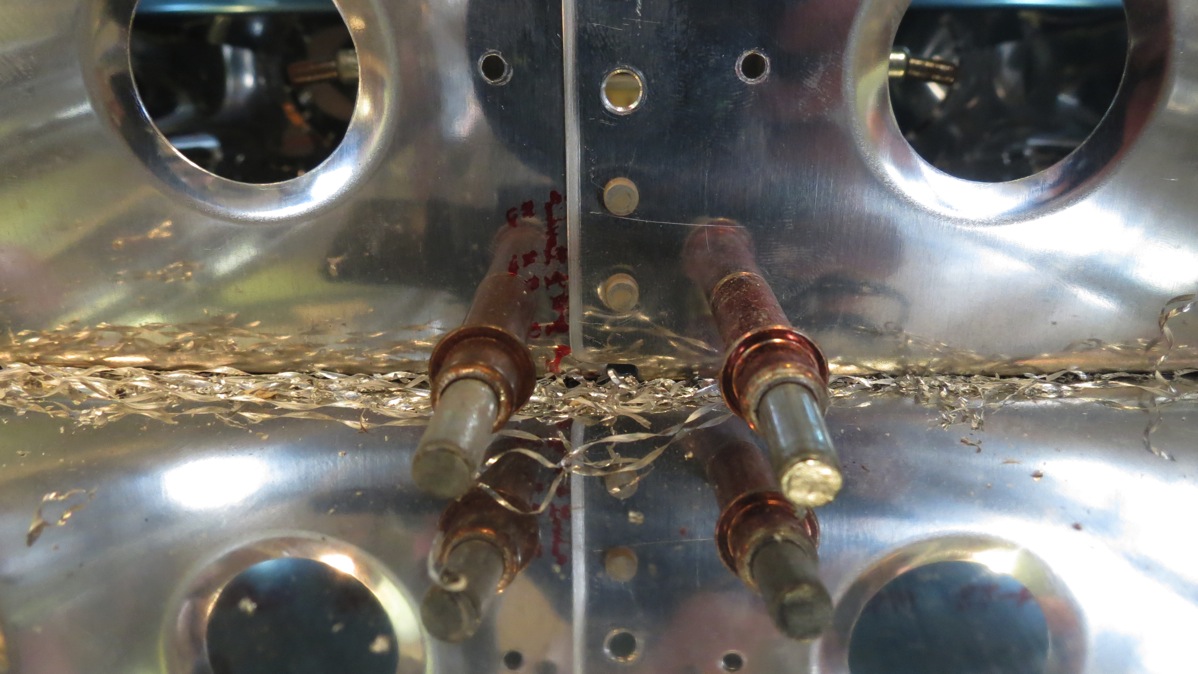 The real fun here was getting the forward aft bottom skin (the big obnoxious one) off. Try as I might, I could not get that thing to slide out from where it was sandwiched at the forward end. I actually ended up removing the aft side skins first and setting them aside; this gave me better access to really yank on the bottom skin, and finally I got the thing loose. For the moment, it’s sitting on top of the newly truncated fuselage assembly: 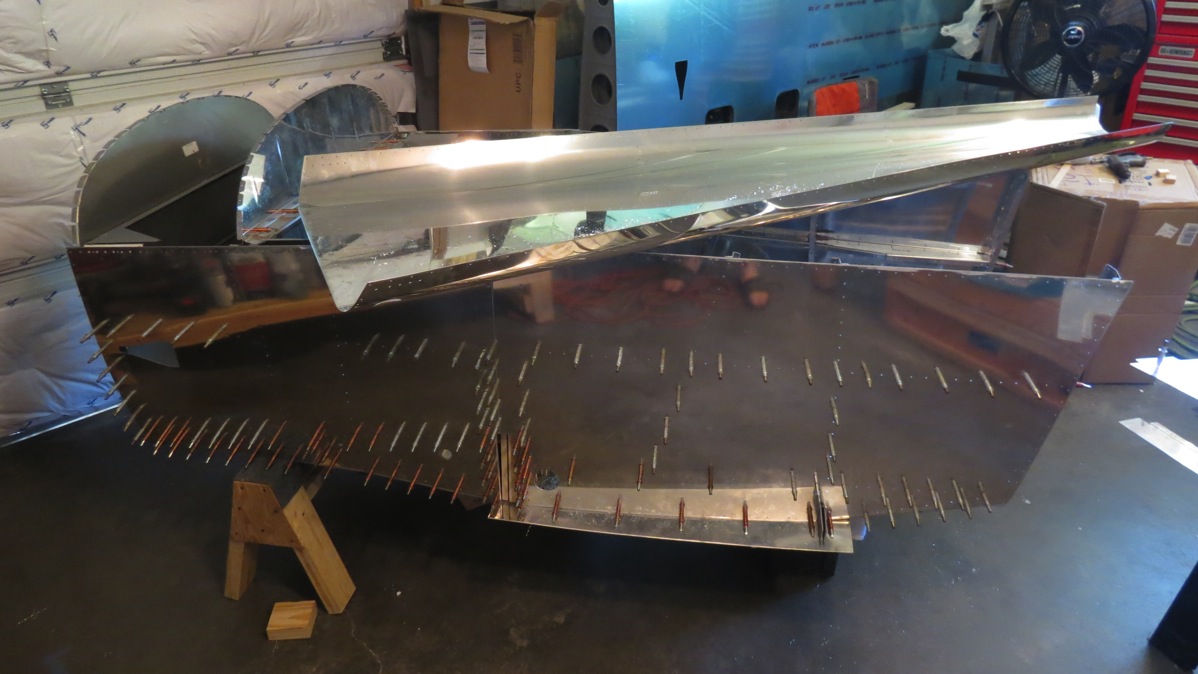 Next up, the mid side skins will come off, and then the mid fuselage/seat rib assembly will be detached from the forward fuse. Then comes lots and lots of prep work. Unfortunately, I’ve got a lot going on tomorrow and I don’t think I’ll have a chance to get out in the garage, so further work will have to wait until next week.