Fuselage drilling (the first of many sessions)

Started out this morning by fixing the right longeron. I’d previously marked the location of the canopy rail slot (where the bend line was supposed to be located), so once I removed the rail, I could easily measure between the bend mark and the slot mark to figure out how much I needed to trim off the forward end. I also double-checked the aft bend line to estimate where it would end up after the trim. That bend was actually a bit further aft than the left longeron as well, so the desired trim would move it to be very nicely in line with the left side.

Pulling the longeron was actually simpler than I thought. The instructions say to remove the top ~6” of clecos all the way down the fuse, but the only area where this is really needed is at the forward end, where the longeron has to slip horizontally into the gear tower and firewall angles. Everywhere else, the longeron just drops in vertically, with no obstacles. The fun part was actually making the cut. Fortunately, the door to the garage lines up nicely with the band saw, so I had Josie stand in the kitchen holding the aft end of the longeron while I cut the forward end in the band saw. After I’d polished the cut ends and replaced the longeron, it lined up nicely.

That let me finally move on to drilling. (well, after I’d clecoed the longeron gussets in place) First, the upper longeron gets clamped carefully at the forward end to ensure it’s flush with the engine mount weldment in both axes: 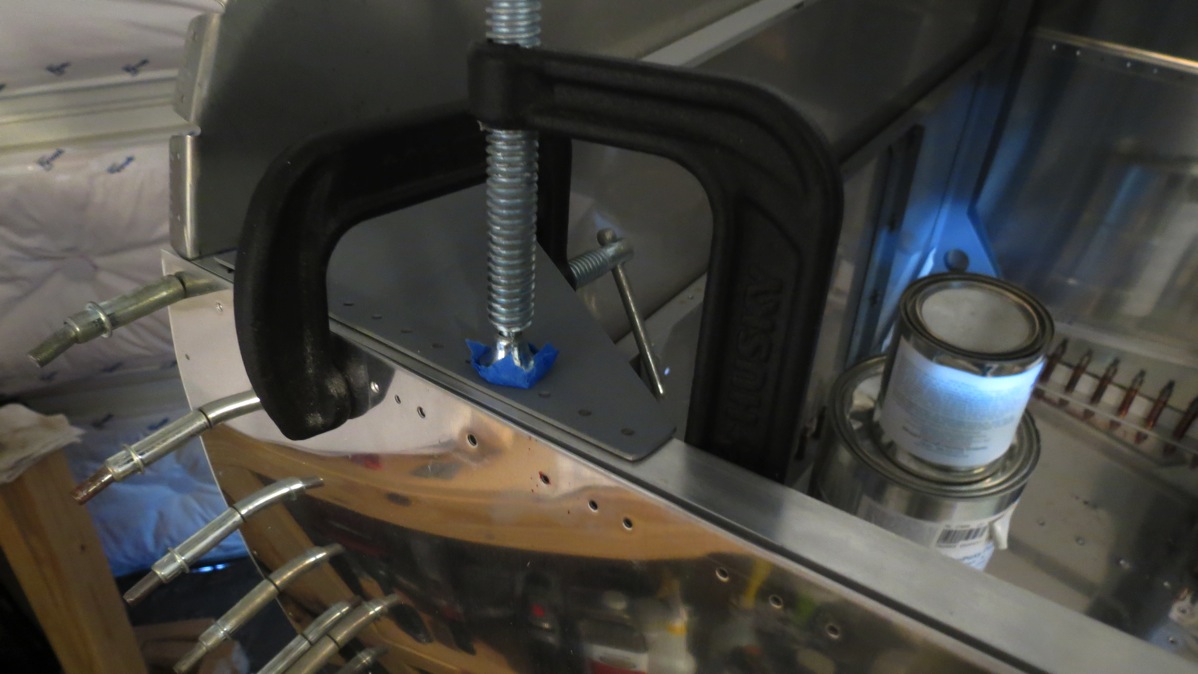 Then, the drilling starts, actually with the lower longeron first. That’s easy since it’s pretty well held in position and there’s no alignment to worry about. Next if the auxiliary longeron, which isn’t really held in position. I drew a centerline on these way back when I started to cleco the forward fuselage together, and you’re suppose to align the line in the prepunched rivet holes, but I couldn’t for the life of me get that line to appear at the forward end. Finally, I figured out that if I removed a few clecos at the forward lower portion of the skin, it’d free the longeron up to be moved a bit. Finally, I was able to drill that.

Then, finally, it was time to work on the upper longeron. I worked my way back to the aft end of the forward side skin (that was the sort of sub-area I was working on), being careful to cleco as I went, back up any flanges that might get pushed out of the way as I drilled, and continually checking the alignment of the longeron. Finally, I went back with reamers and final-drilled all the remaining prepunched holes.

There are quite a few clecos in play up here now: 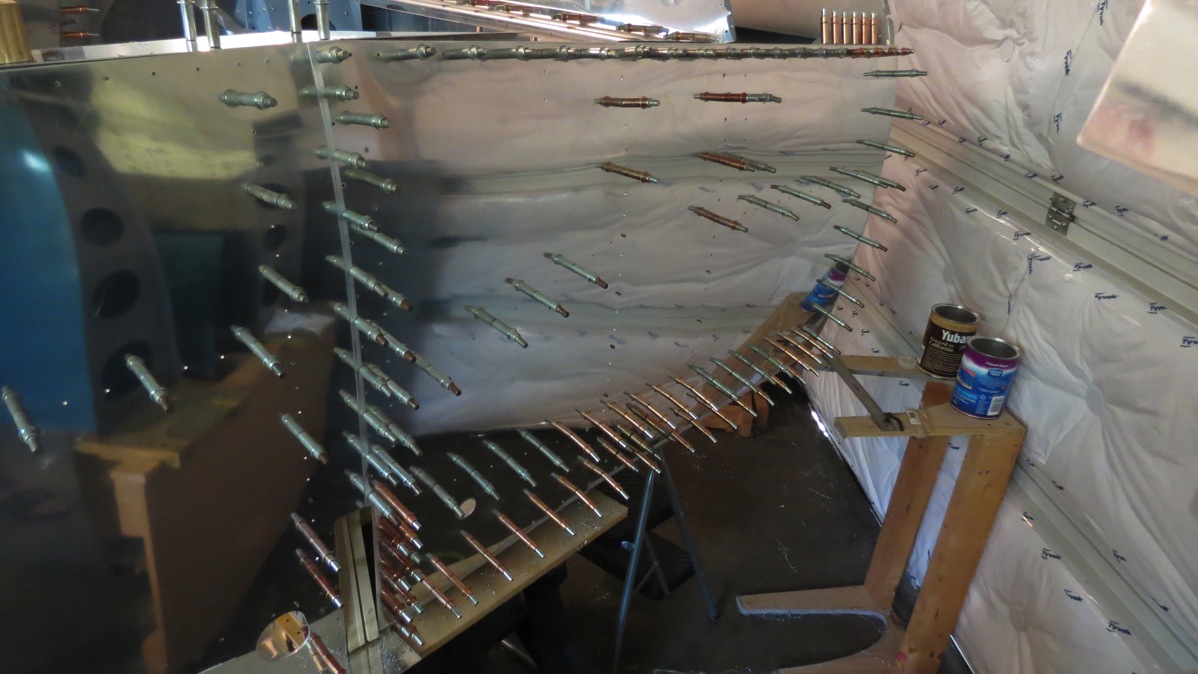 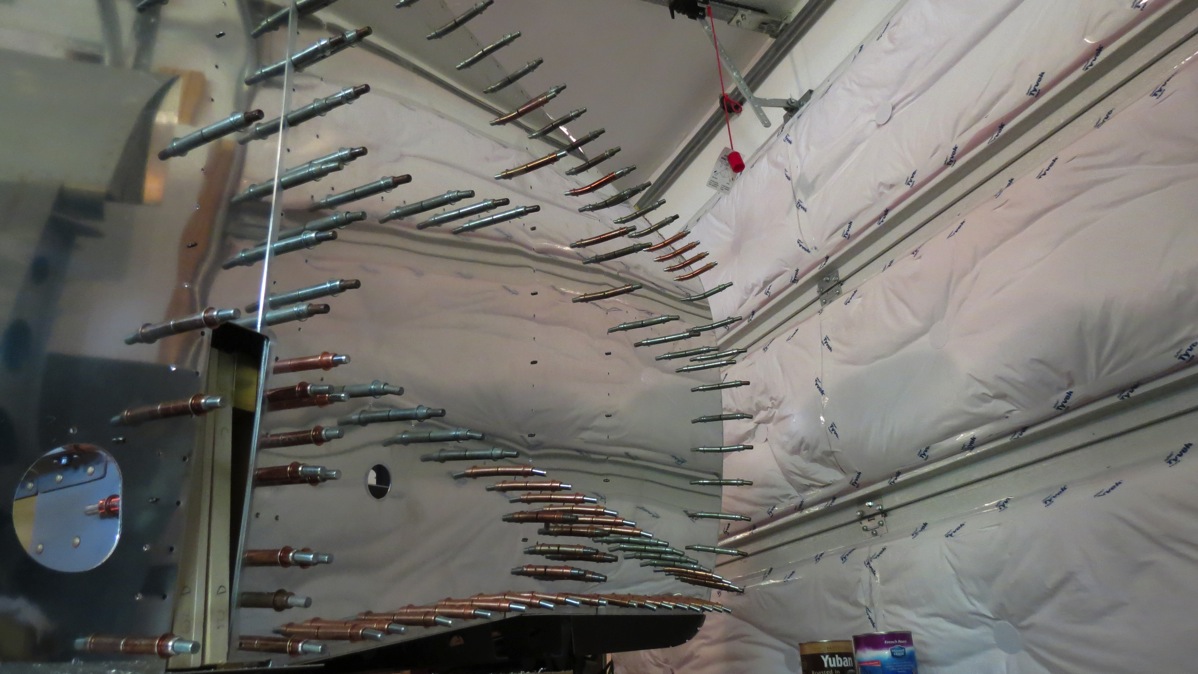 After a quick break, I got started on the left forward side skin…but I didn’t get very far. On about the sixth hole in the lower longeron, my drill bit caught on a cleco inside the cabin and promptly snapped. Turns out it was the last #30 bit I had around, except for my really long bits. I tried one hole with my 6” bit, but it was stupidly dull – must have been a bit that came with my secondhand tool kit. So that pretty much put a stop to longeron drilling for the weekend. I could possibly have run to Ace Hardware – they do sell numerical drill bits – but I’ve been down that road before and I found those bits to be pretty low-quality. So I’ll just wait to get good bits next week.

That left me with some thinking to do about how to proceed. The following steps are all pretty linear – progressively match drilling the entire fuselage, then ripping everything apart for deburring, dimpling, and eventually final assembly. So there’s not really an obvious place to skip ahead to. Finally, after reading waaay ahead, I found the seat assembly instructions. These seem like fairly independent tasks, so I’ll play with these for the next few days rather than just sitting on my hands.

I took the time to find all the parts for the from and rear seat backs, then clecoed them together just to get a look at the structure. Tomorrow I’ll work on actually dealing with these, including cutting and drilling the piano hinge that will go at the base of each piece. Hopefully there’s enough seat stuff to make a good day’s work tomorrow…

Front seat back: (that’s not a confusing phrase at all) 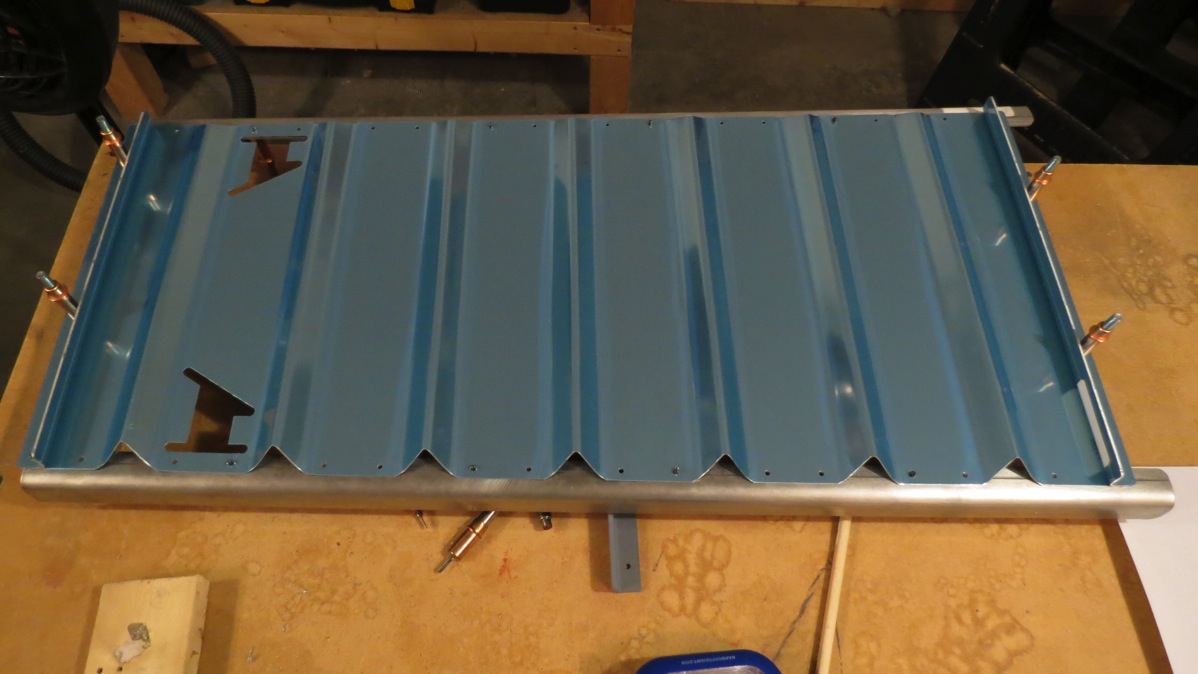 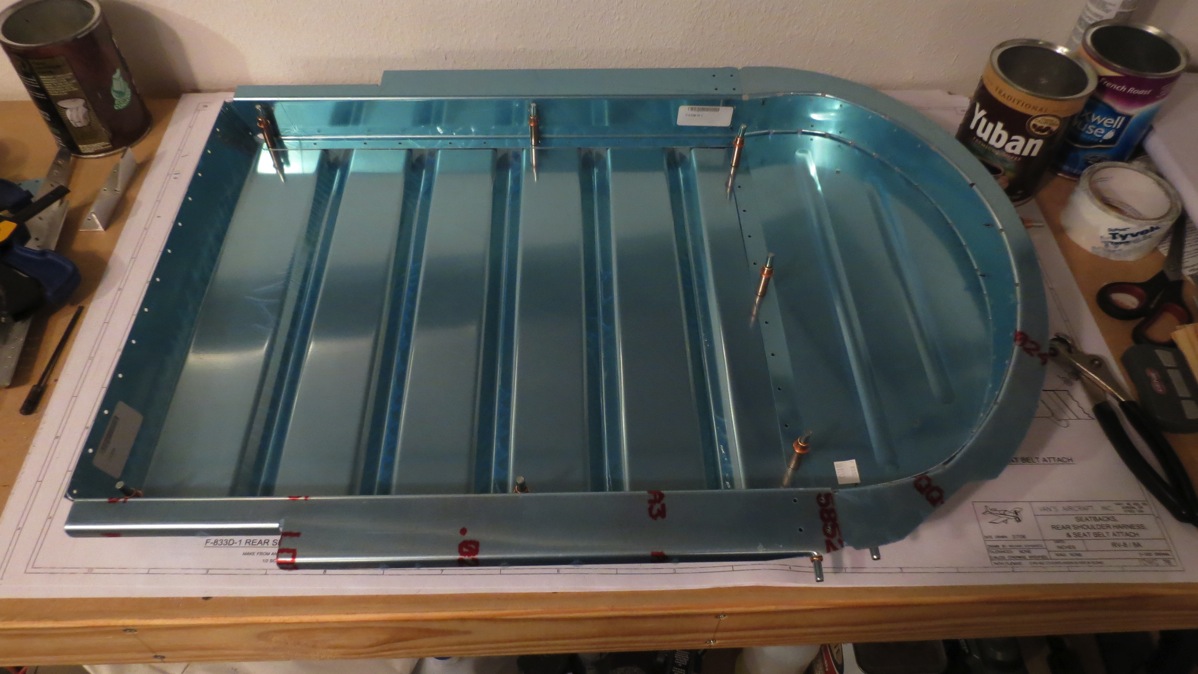 Note that the rear seat is a lot wider than the front one. I’m not quite sure the reason for this – well, the rear seat is as wide as it is because it basically fills the entire fuselage profile and serves as a door to the baggage area – but I dunno why the front seat is so narrow. Anyway, that’s it until tomorrow…