First order of business tonight was to get the firewall riveted to the forward floor. To start with, I cleaned and scuffed the mating area between the two pieces where I was going to apply fire barrier sealant. The prepping was probably overkill, but I figure it can’t hurt. NextI put down a strip of masking tape to help with cleanup later, then laid down a bead of sealant across the mating area. Note that this only covers part of the firewall’s width, specifically the area where the cooling ramp recess is located: 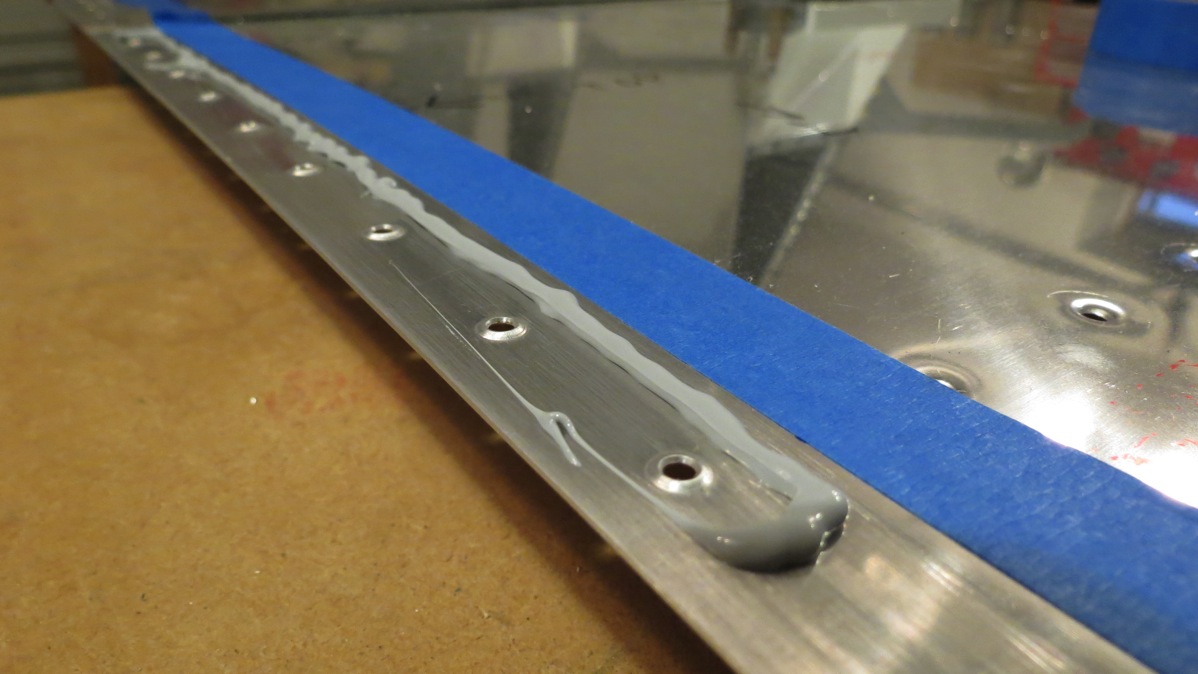 Then I slid the firewall in place and clecoed it, making sure to put a cleco in every hole where there was sealant. These holes won’t be riveted until much later, so I’ll depend on the cloches to pull everything together tightly while the sealant cures: 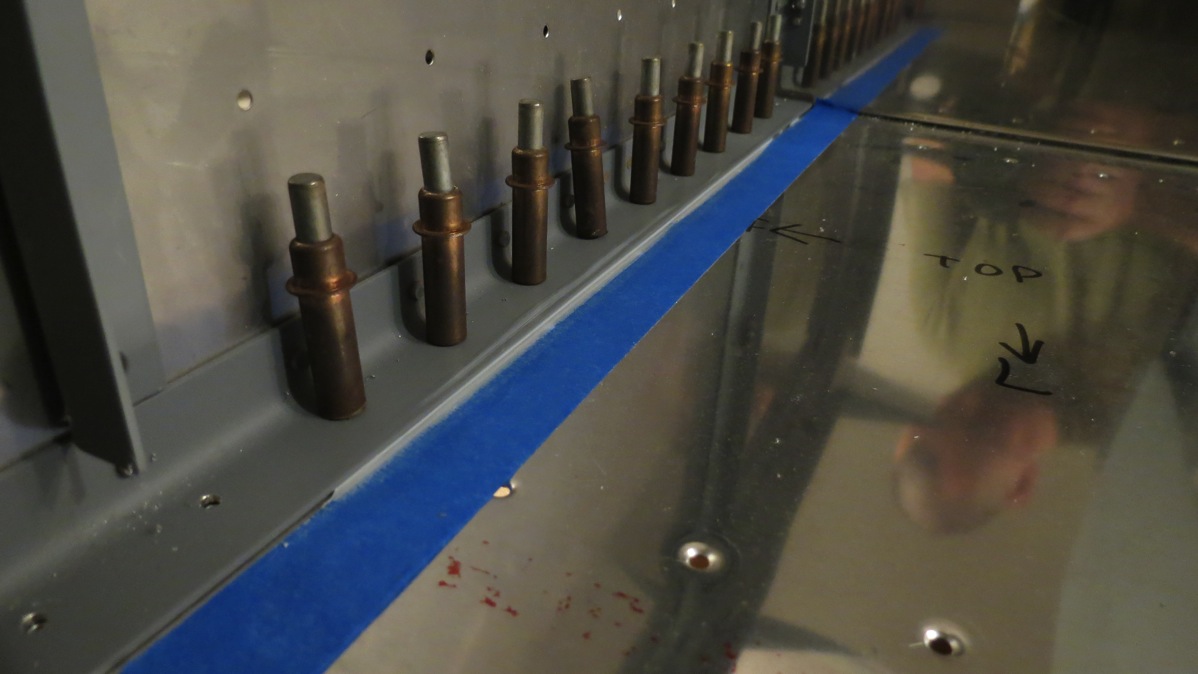 And finally I smoothed the squeezed-out sealant into a nice bead and removed the tape. There’s a bit of a gap in the fillet in the background of the photo, but the seal should still be OK. I’ll probably end up sealing this joint on the forward side just for extra security: 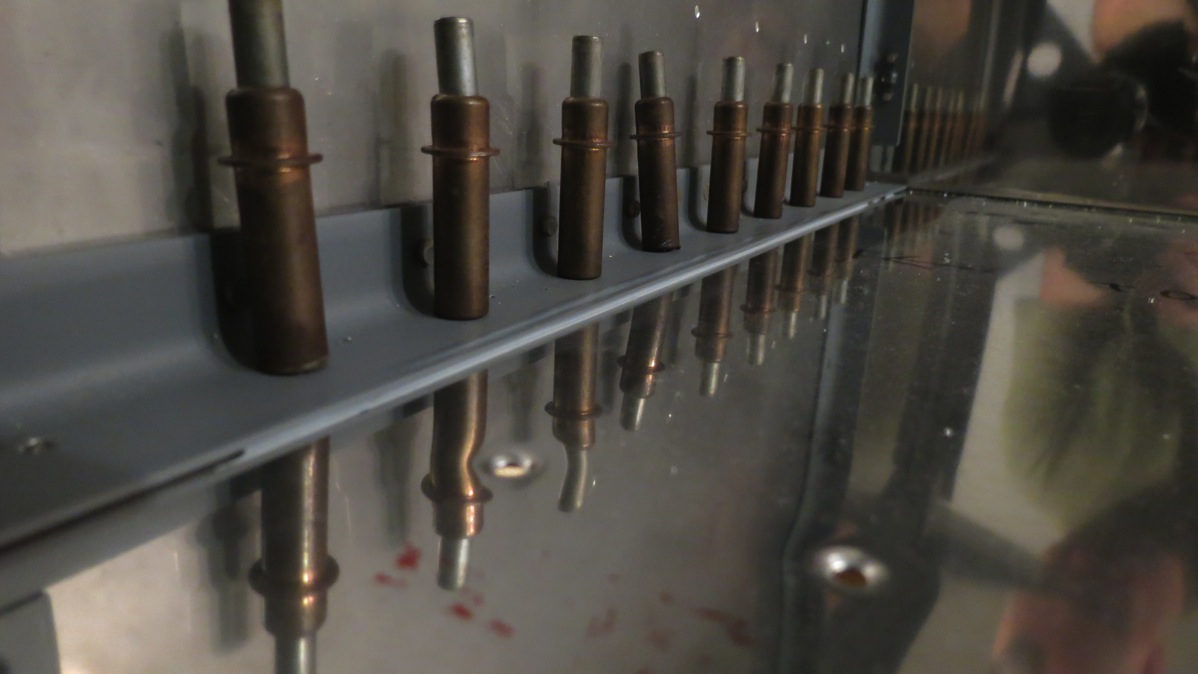 Next, I worked on shooting the outboard rivets between the forward floor and firewall. These were kind of fun, because the firewall makes for somewhat awkward access for riveting. I eventually turned the entire assembly on end, with the firewall down. That made it much easier to shoot the rivets. The main issue here is that there’s no real structure between the top of the firewall and the baggage bulkhead. The baggage side piece keeps everything more or less in lien here, but there was one rivet where I needed to remove the baggage side for access. So I ended up using scrap wood to support the structure while the baggage side was out:

That completes assembly work on the forward structure for now. Time to set it out of the way so I can work on other things. I’d been thinking about how to handle a platform to build the fuse on, and what I settled on trying was using my three good sawhorses, with a chunk of scrap MDF for a makeshift tabletop. Well, that was a decent idea, but that scrap MDF is way too short to be useful here. I need something more like a 8’x30” piece or something. I guess another Home Depot trip is in my future; the current makeshift platform barely accommodates the forward structure. There’s not even enough room to work with the seat rib assembly on this thing: 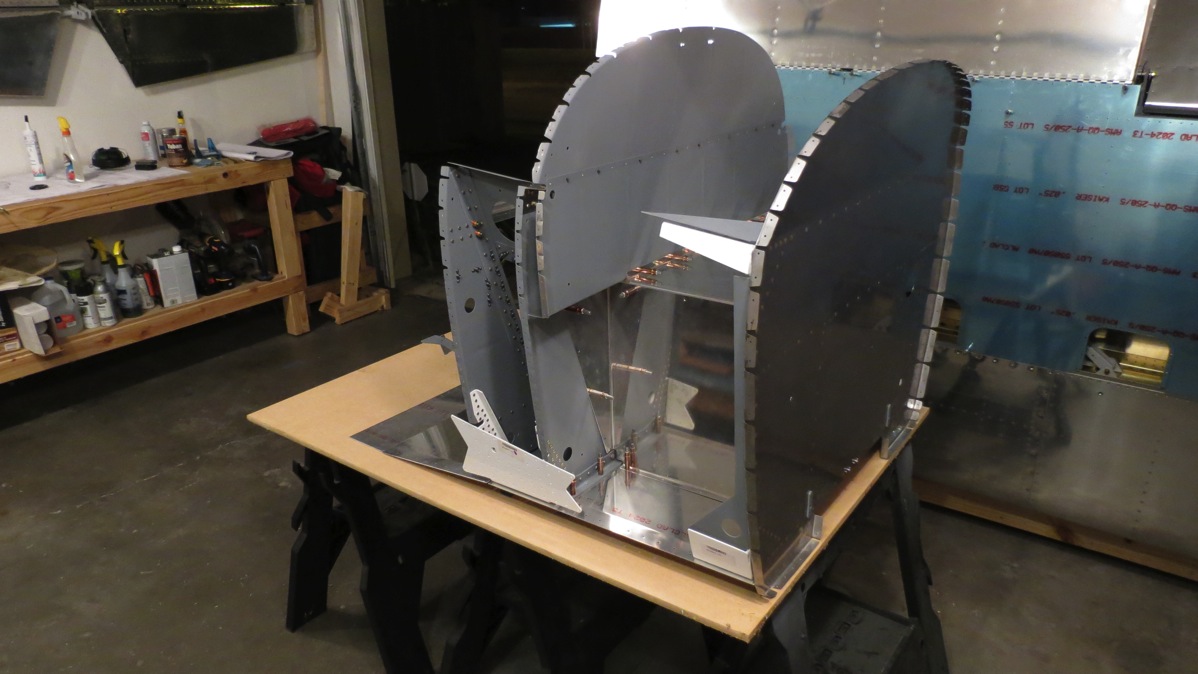 Before quitting for the night, I tinkered with the center section a bit. Van’s support OK’d my proposed doubler to reinforce where I enlarged the wrong rudder cable passthrough hole, so I started working on that doubler. I cut a way oversize piece of .040” sheet and drilled the first batch of holes in assembly with the center section web: 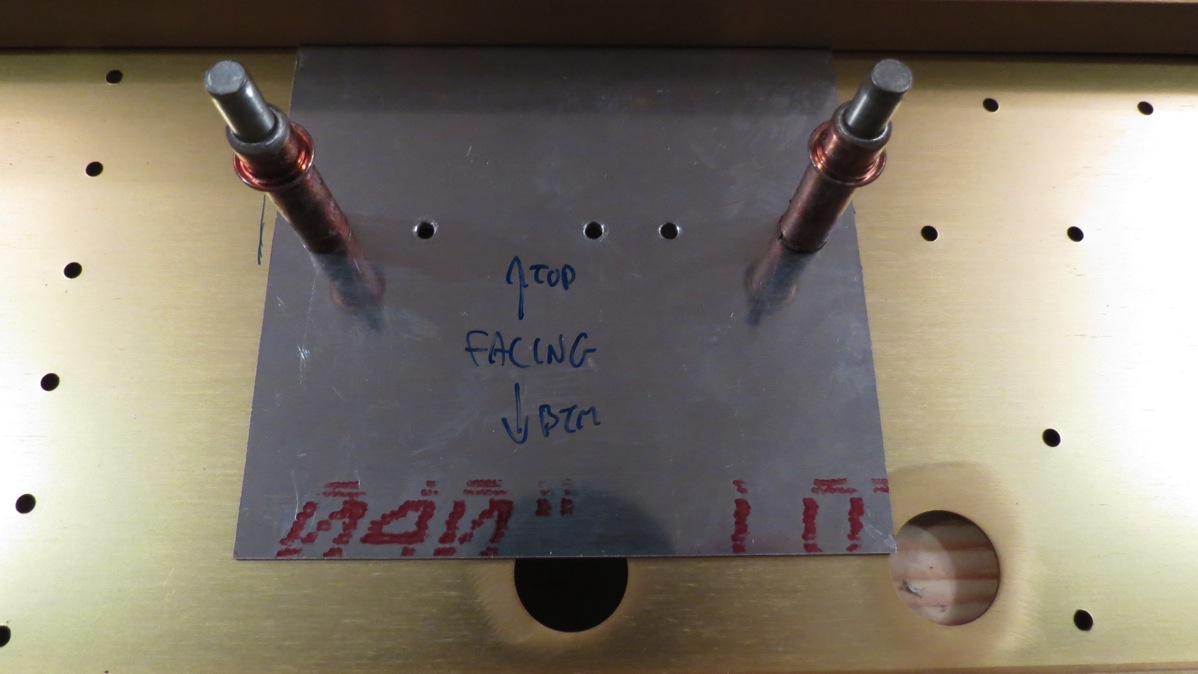 Next I’ll enlarge the proper hole for the cable passthrough in both the web and the doubler, then once that’s done I can work out the rivet locations around the perimeter of the doubler and ensure edge distance around the existing holes and so forth. Should be able to get this doubler finished up tomorrow night, I think…though my brother is coming to stay the night, so I’m sure it’ll be a short night in the garage, if I even get out there.

I should probably hash out the work platform this weekend, cause it seems like things are going to start going together fairly quickly here…