I was originally going to work on the skin-spar rivets for the left wing today, but Josie pulled a muscle or something in her back yesterday, so I couldn’t really ask her to help move that wing to the workbench. Instead I decided to finish the right wing riveting and then work on the aileron brackets and maybe the flap brace and aileron gap seal.

The leftover rivets on the right skin were all in the vicinity of the inboard reinforcement forks. The outboard group of these were pretty easy to do with the squeezer, but further inboard, where there’s a second small reinforcement plate, things got tougher. Even the thin-nose yoke wouldn’t fit between the unsqueezed rivet tail and the shop heads on the reinforcement. I tried using the rivet gun and a thin bucking bar on those, but the results were rather unpleasant: 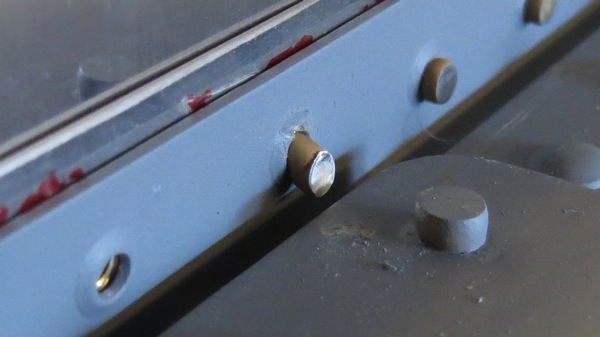 After drilling out that rivet, I decided to change my approach. The plans call for -4 length rivets here, but they’re a little on the short side, so I was using -4.5s instead. A quick test showed that a -4 rivet was enough shorter that I *could* squeeze with the thin-nose yoke in that case. So I decided that in this case, having slightly undersize heads was a better choice than the damage that might result from continuing to try and shoot the longer rivets.

With those rivets done, it was on to the aileron brackets. An immediate problem presented itself here: The bottommost rivets between the brackets and the spar are supposed to be flush rivets, so those holes need to be countersunk. This would have been better done before the entire bracket was assembled, but that ship has definitely sailed. I spent quite a bit of time trying to figure out a way to countersink here. My “trimmed” cage fit in place OK, but the drill chuck conflicted with the bracket body, so it was no use. So I decided to try and work something out using the drill press. First I tried chucking the extension for my deburring tool in the drill press (so I could then screw the countersink bit into it), but that did not go well. When I turned on the drill press, that extension wobbled briefly before ejecting itself at high speed and bouncing off my forearm. This left a nice bruise on my arm and also bent that extension, thereby ruining it.

But hey, since it was ruined, I might as well modify it for my current task. So I cut off the bent portion and now I was able to securely chuck it in the drill press: 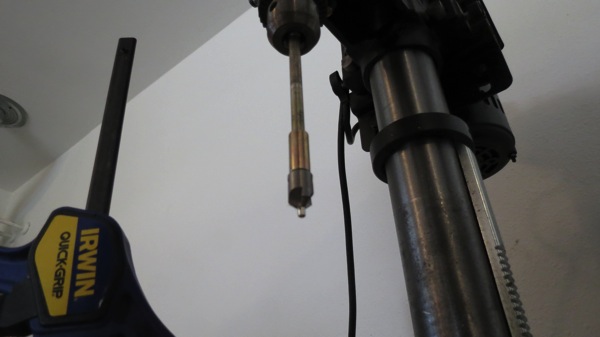 My strategy here was to use the drill press table height as a way to set countersink depth. I’d put it at a height where full extension of the press gave me a proper countersink. I was skeptical of whether I could be very accurate this way, but a couple of test runs on scrap showed that it worked surprisingly well. In no time I had the brackets countersunk. Problem solved!

Of course there was another problem. Each inboard brackets interfered with the shop head of the skin rivet above it. My first tactic to remedy this was to squeeze the skin rivets a bit more; I got them down to minimum acceptable height but there was still interference, so I resorted to filing the tops of the brackets to provide clearance: 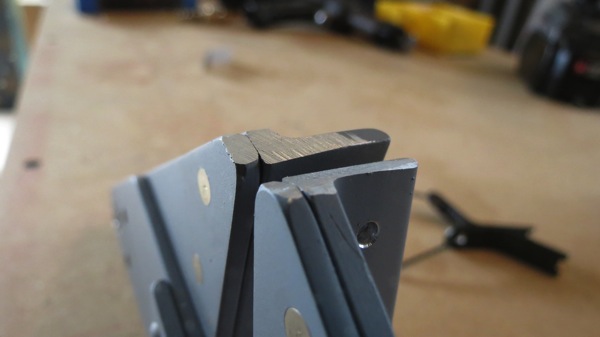 I shot a bit of touch-up primer on the brackets and let them dry a bit outside while I turned my attention to the outboard brackets. Riveting these was fun; there wasn’t good access for the squeezer, so I had to use the gun. Even better, there wasn’t good access to use my normal straight set, so I resorted to a double offset set. I really don’t like using that thing, though I made use of a VAF tip to prevent the set from rotating while I was shooting (and proving the duct tape is indispensable): 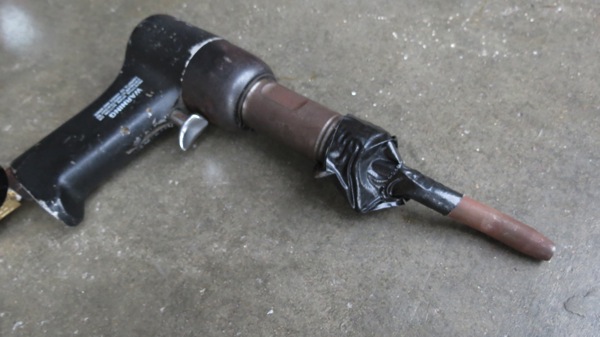 The reason I don’t like the double offset set is that it’s tough to keep the set hitting straight down. This was how I ruined a wing rib back when I was riveting it to the main spar, and it bit me again here. I had one bracket rivet that I couldn’t seem to get fully set. After a couple of hits, I went at it again and the manufactured head actually popped right off. I’d been inadvertently applying a side load to it, enough to shear the head right off: 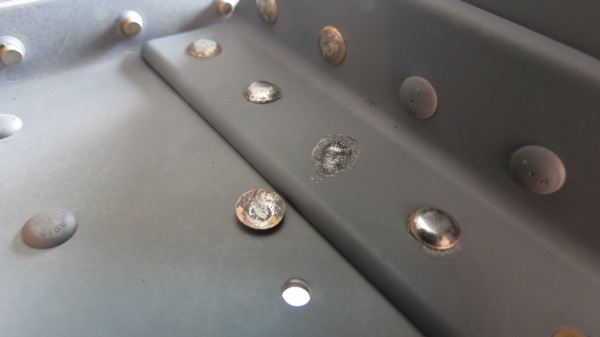 Well, at least it was easy to drill out. But that got me looking at that rivet right under it, which I was pretty sure I’d smeared the head on as well. I decided to drill it out and replace it. Well, turns out I was right about the head being smeared; I carefully drilled in the center of the head, and what I saw after popping the head off was that I’d made a second hole in the bracket about 1/16 off-center from the original: 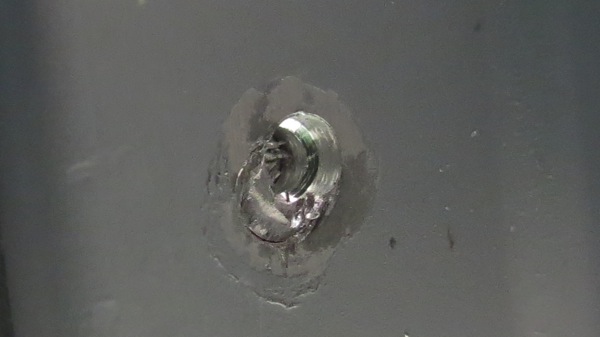 Well, the bracket was clearly toast at this point. The good news was that I’d only need to replace this angle piece, and not the whole assembly, assuming I didn’t foul anything else up while removing it. So it was time to go to town drilling out the rest of the rivets. I managed to do it without further damaging the bracket, but when I pulled the bracket off, I discovered that I’d drilled through the bracket on that original hole and into the spar reinforcement: 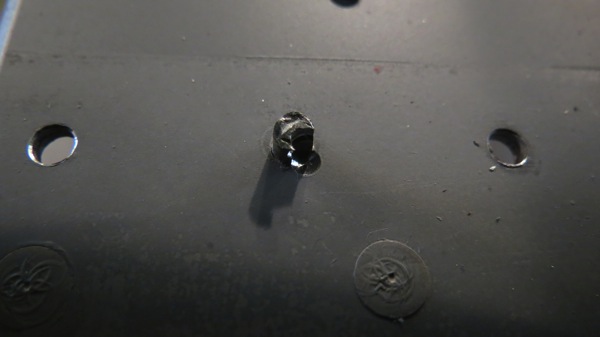 Well, at least it’s not all the way through into the spar. But now I get to drill out even more rivets, and the reinforcement has to be replaced as well. (grumble) Some of the rivets holding that reinforcement in place were surprisingly stubborn. It took a while to get them all out, but finally the reinforcement was removed without any further damage: 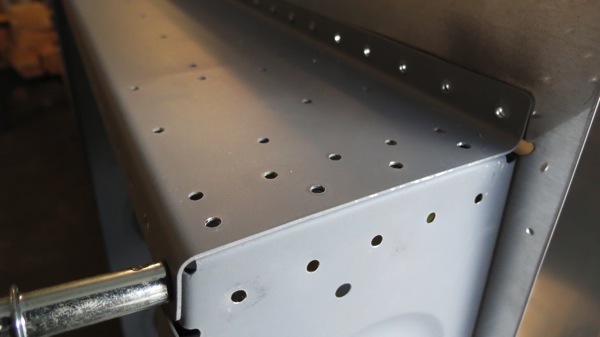 The good news is the the outboard bracket on the left wing went on OK, probably because the riveting position was less awkward: 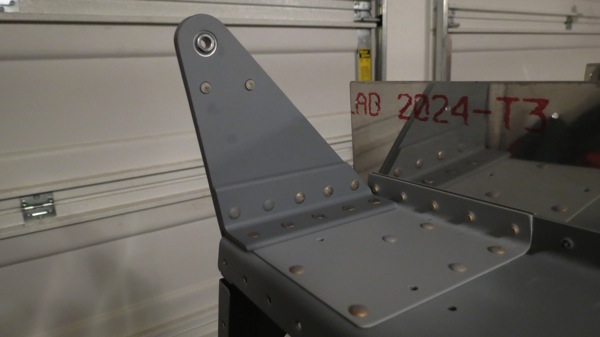 So now I’ve got some parts to order. I’m also going to order some stuff from Avery, specifically a long straight rivet set for situations like this. The straight set should allow me to set these rivets without the nasty side load tendency of the offset. I won’t be trying to rivet the inboard brackets until I get that in.

I’m not sure what I’ll work on this week – maybe the skin rivets on the left wing if Josie can help me move it, otherwise I guess I’ll go back to working on the ailerons. I can get the skins dimpled and then rivet the stiffeners in place, maybe finish the trailing edge bends once I build another bending brake.