Well, so much for having a big productive day – though I kind of knew today wouldn’t go so great since I had a flight scheduled in the middle of it. I went out into the garage today thinking forward to getting some mundane tasks out of the way, figuring that it wouldn’t be long before I could start riveting the LE units together.

First task was to rivet the nutplates onto the W-423 joint plate, which joins the LE unit to the fuel tank. It didn’t take long before I realized that there were some real problems here. The nutplates didn’t seem to want to line up right with a cleco in one side, so after futzing around a bit I ended up putting a screw in each one to hold it in place. That’s when it became clear that the nutplate rivet holes weren’t drilled correctly. This was the plate that I started out wrong, by trying to cleco the nutplates in place before dimpling the screw holes. I thought things had turned out OK, but apparently not. I guess there was just enough slop in the clecos before to fool me. 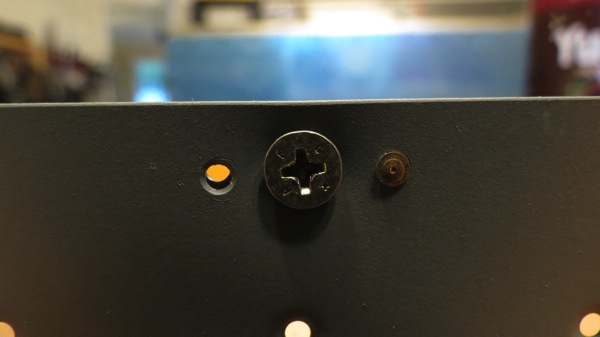 So long story short, it looks like I’m going to be replacing this part. It’s going to be a bit challenging, since this plate has to align with three other parts (the LE skin, the tank skin, and the inboard LE rib). I think I have a pretty good idea how to make everything fit together, but it’s going to be a bit tedious. On the other hand, I have abundant material around to fab up a replacement, thanks to my ruined skins. Even better, I think I’ll make the replacement out of the ruined LE skin, so it’ll have the correct bend in it right off the bat. That might help some with getting everything aligned correctly.

Anyway, that ate a lot of time this morning: figuring out I had a problem, sulking about it for a while, searching around on VAF to see if anyone else had had a similar problem, all that fun stuff. Before long it was time to get ready for my flight – which ended up not happening due to some gusty winds. Probably a good idea, since I had trouble last week with relatively minor crosswinds…should probably tame the taildragger in those conditions before I go out when it’s really blowing.

Finally, in the afternoon, I was in a mood to go work again. I started with the other joint plate, and was relieved to find that I didn’t have the same alignment issues there. The nutplates went on without much trouble, and once I had them all riveted, I got out the left tank and screwed the joint plate in place to verify fitment: 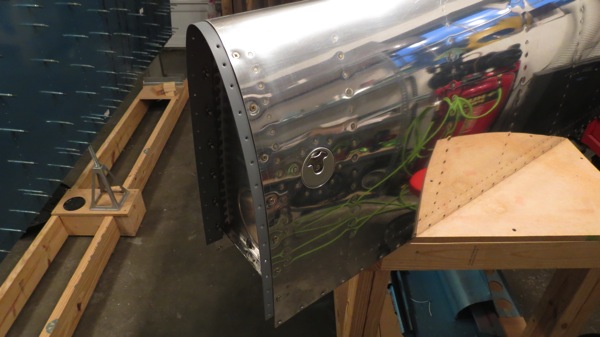 Next I turned my attention to the outboard rib pairs for both LE units; the landing light reflector mount will go between these ribs, and those nutplates needed to be riveted in as well. Fairly straightforward work really. Once I had one pair done, I got out a reflector and screwed it in place between two ribs to illustrate how the light mount will look: 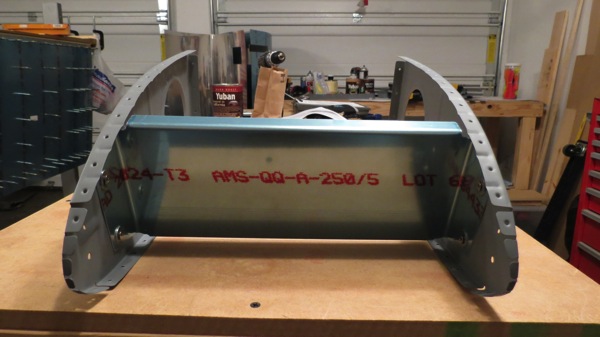 And that was it of the day. I set about putting together some dinner, and then we sat down to watch a movie. I guess tomorrow I’ll set about trying to make the replacement joint plate. We’ll see how that goes…