Yup, today was the day, time to close up a tank. I’d kind of hoped to close up both today, but as is par for the course with these things, it took far longer than I expected. I think maybe it’s impossible to accurately estimate the time needed for this stuff, like the sealant somehow bends space-time or something.

Anyway, knowing that a lot of things would be going together, I spent a fair amount of time prepping the work area and getting everything I needed ready to go. To start with, I taped some wax paper over the spar bars on the left wing. This was so that, once the tank was closed, I could immediately set it in place on the spar to be doubly sure that no squeezed-out sealant would give me fitment problems down the road: 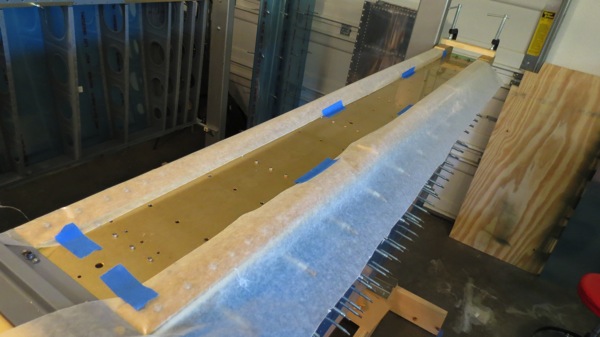 Next I put the tank assembly, baffle, and attach bracket on the work bench, and gave all the mating surfaces a good cleaning: 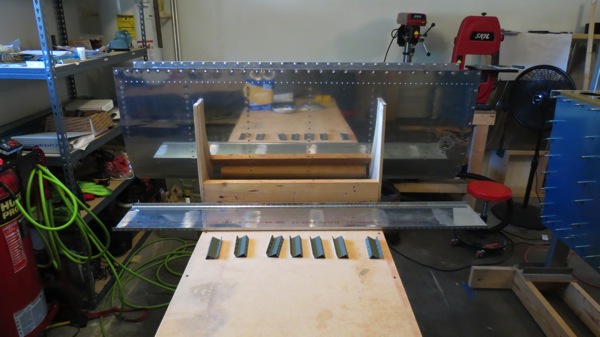 And with that, it was time to mix up some sealant. Lots of sealant, as a matter of fact, because there were lots of mating surfaces to deal with. The essence of the procedure here is to lay a bead of sealant along the rivet line for the skin-baffle joint; when the baffle is dropped into place, it will push the bead ahead and make a nice seal. The mating surfaces of the ribs also get a coat of sealant, plus some sizable blobs at the corners of the tank – apparently these are a very common leak location. Here’s everything all lubed up: 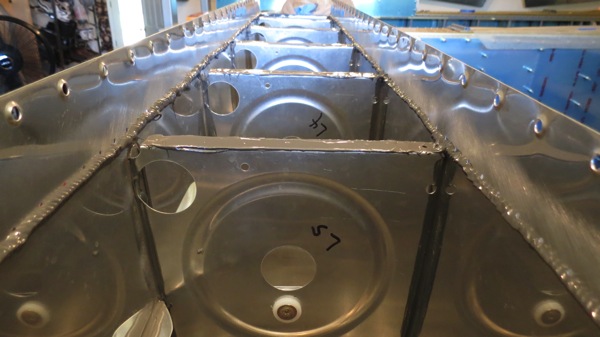 Next, I dropped the gaffe in place. I was surprised how easily it went in…next it gets 100% clecoed to the skin. As I did this, I began to suspect a problem, I was getting almost no sealant squeezing out of the joint as I clecoed, which made me worry about whether I had a good seal – especially coupled with the ease with which the baffle went in, like it didn’t actually do much pushing of sealant. I debated a bit as to whether I wanted to just move forward and hope for the best, but it didn’t take long for me to realize that hope was a pretty bad thing to count on. So I removed all the clecos, pulled the baffle out, mixed up more sealant, and applied a second bead of sealant, further towards the back of the skin. This time, when I dropped the baffle in, I got lots of squeeze-out. (in fact, that whole process of removing and replacing the baffle was pretty hilariously messy)

So with the baffle back in place and clecoed, I went to work on the baffle-rib joints. These get blind rivets, since there’s no access to the inside of the tank, and the rivets get swirled with sealant before insertion to ensure they don’t become a leak path. The attach brackets go on the same way, but here the clearance to the rivet stems was tight, and I ended up grinding a fair amount of material off the nose of one of my pop rivet guns. Nothing like some field-modified tools to help things go together…

Finally, I set the outer baffle-rib joints and attach angles with solid rivets, then finished things off by squeezing all the skin rivets (an operation which left my arms rather tired). This was followed by a rather extensive cleanup session, with most of the time spent cleaning the skin behind the baffles, which will sit on the spar. Again, I don’t want any firmer issues here from sealant build-up.

The baffle, brackets, and such, all finished:

And the completed tank sitting on the wing: 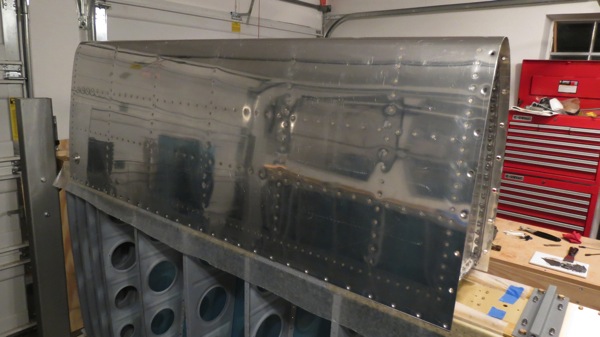 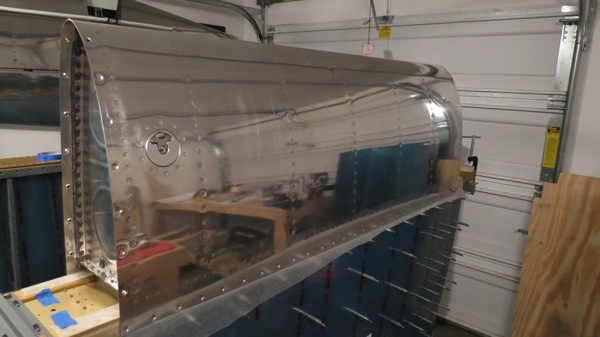 So yeah, this took way longer than I expected, although doing the baffle sealing twice didn’t help much. No way is the right tank going to get closed up on a weeknight this week, so I suppose I’ll leave it for next weekend, because tomorrow we’re going to be out of town for the day. But hey, this tank odyssey is almost at an end!