Lots of stuff to do this morning and tonight, but I did manage to get out in the garage for a bit. After thinking it over, I’m going to order the prefab fuel pickup from Van’s instead of making my own. About the only reason to make my own is so I can do it Right Now instead of waiting a few days. Well, that and paying shipping. It would have been nice if I’d discovered this last week before I ordered my replacement rib…oh well.

So instead I started out with the tank drain. This goes on the inboard rear corner, which is the lowest point due to the wing’s dihedral and the slope of the lower tank skin. There’s already a single prepunched hole for the drain, but the rivet holes aren’t there. So the drain had to be positioned, clamped, and then used as a drill guide for the skins.

Here’s the flange clamped to the inside of the skin: 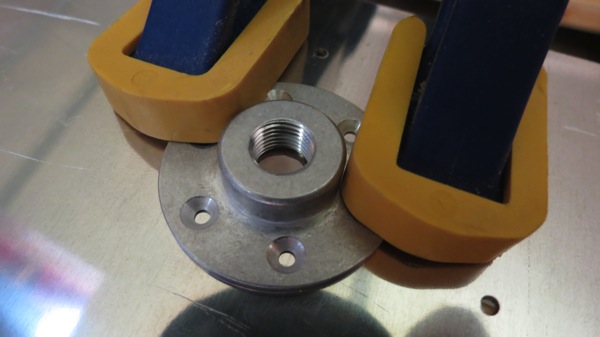 Getting that thing lined up and clamped was a bit painstaking. Right after taking this picture, I realized that the rivet holes alone the sides didn’t quite line up with the holes for the ribs. This bothered me a bit, and I almost unclamped and redid it. Then I thought if how annoying it would be to try and align the holes as well, and considered how many people were actually going to roll under the wing and criticize my alignment. Yeah, it’s fine as it is. I’m not building a showplane.

The flange actually mounts to the outside of the skin. At first I thought it was odd for this to be hanging out in the wind, but the reason is simple (and obvious in retrospect): The more the drain sticks up inside the tank, the less effective it is at removing contaminants and water at the bottom of the tank. There’s a guy who makes fairings for the drains; I’m thinking I might order and use them. If nothing else, it’ll help hide the not-quite-aligned rivets in the flange.

Here is it in place: (I should have clecoed this from the other side of the skin so you could actually see something other than clecos. Oh well.) 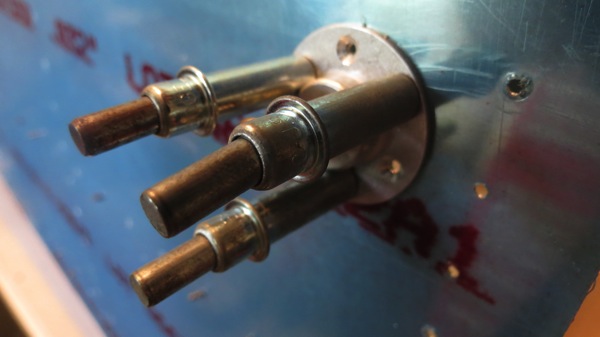 Next up is the fuel cap. Things are kind of reversed here from the drain flange; the large hole and the rivet holes are in the skin, while the cap flange has no holes. So in this case, the cap is aligned and clamped in place and the skin used as a drill guide. What makes this fun is that the top of the flange is curved to accommodate the curve of the tank skin, so it has to be carefully aligned before drilling: 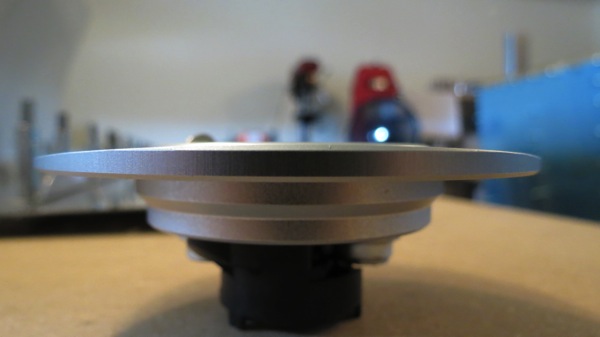 If I thought lining up and clamping the drain was annoying, well…that had nothing on this. I think I needed about five hands to get this done efficiently, but I eventually managed to get it clamped in place: 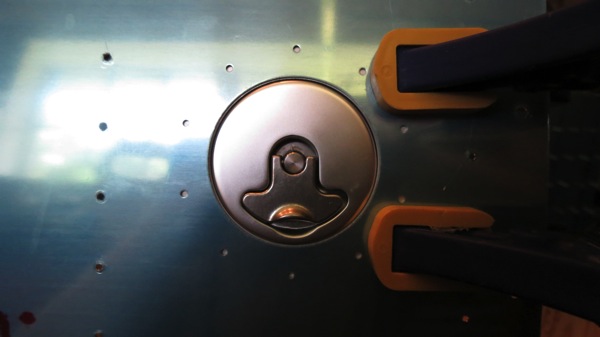 From there, I just started drilling and clecoing. Once I had a couple of clecos in place, I could remove those bulky clamps, and everything went pretty quick. Here’s the cap clecoed in place: 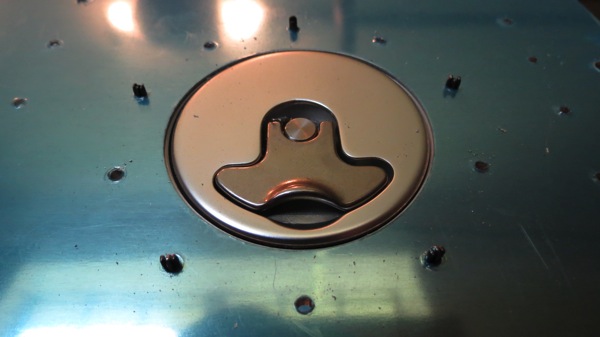 Next the cap flange gets countersunk for the flush rivet skin dimples: 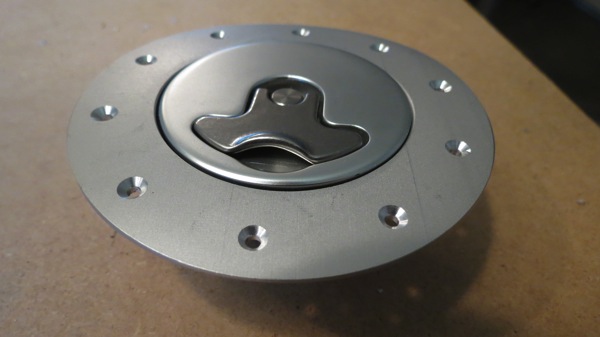 Then there’s one final bit to be done. The fuel vent line will run from the inboard rib all the way out here by the cap, where it will terminate just outboard of the cap. So there’s a little bracket that is riveted in assembly with the cap to hold the free end of the vent line. This clip has to be fabbed from a strip of .025 sheet. The fun part is making the little curl that the 1/4” vent line will fit into. I puzzled a bit over how best to do this, and eventually settled on a combination of a drill bit, pliers, and the vise.

For my first attempt, I stuck a 1/4’ drill bit in the vise with the base sticking out; this would be my bend guide. Then I just held the end of the strip with pliers as I gradually bent it around the bit. This made for a nice circular bend, but the aluminum has enough springback that the tubing fit a little too loosely for my preference. So I tried again with a slightly smaller bit; this time the bend was a bit too small, but I was able to force the 1/4” bit into it to size it back up a bit. After that, the tubing fit nice and snug: 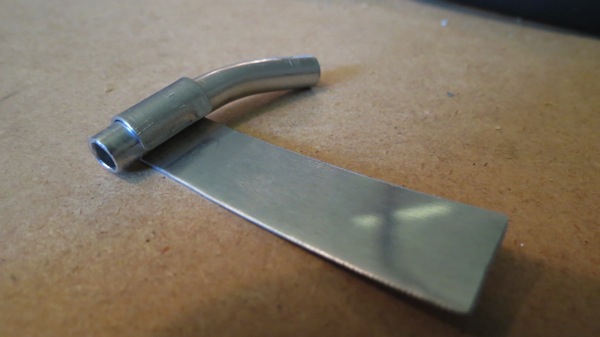 Then it was just a matter of bending the free end to position the tubing nice and high on the skin, then trimming it and drilling the rivet holes. Here’s the finished clip clecoed in assembly with the cap: 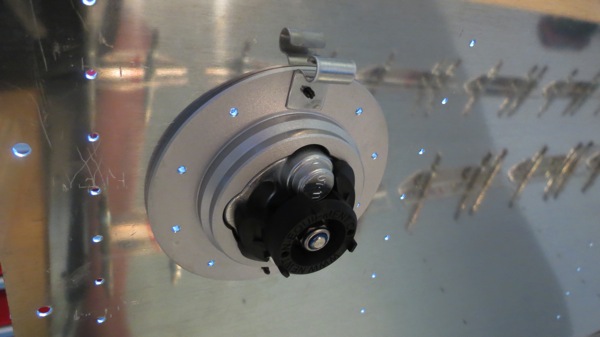 At this point there’s not really anything left to do on this tank that doesn’t involved sealant. I suppose tomorrow night I can do all my hole deburring and dimpling on the skin and rivets. Before I can seal, I need to pick up some supplies, most notably MEK for cleaning mating surfaces. I suppose another Home Depot run is in order. I’m almost tempted now to keep going on this tank even after the replacement rib comes in…