Work continues on the left tank while I wait for my replacement rib. With pretty much everything match drilled, I moved on to working on the end rib reinforcements. The outboard end of the tank just gets a plate riveted on its inside face, while the inboard rib get that plate along with one of the attach angles I fabled up last weekend. This angle will eventually attach to the fuselage to help carry the weight of the tank.

To start with, I laid out the rivet hole locations based on the plans: 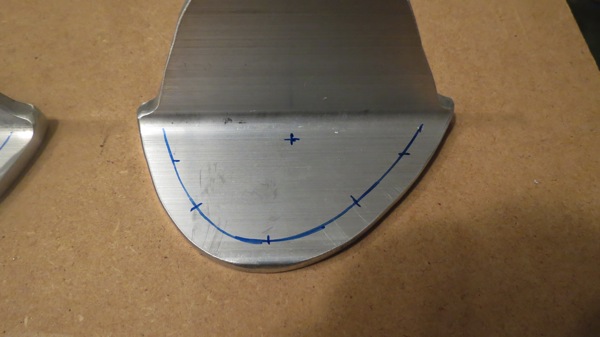 Then I center punched those locations and went over to the drill press to drill the holes: 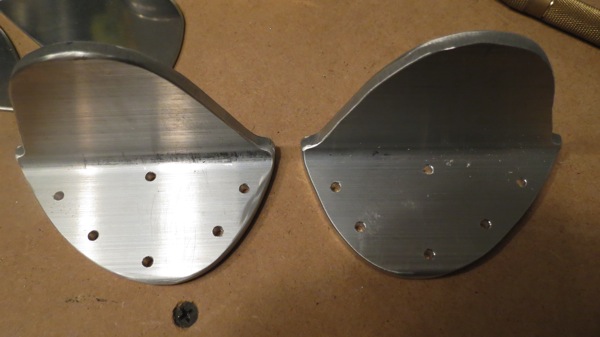 Now the angle can be used as a drill guide for the rest of the assembly. The fun here is that according to the instructions you should clamp everything in place and drill it in assembly. Easier said than done, since both the angle and the plate need to be carefully located, but on opposite sides of the rib. After (unsuccessfully) trying a couple ways to do this, I came up with a better idea. First I just clamped the angle in place, then drilled two of the rivet holes. Next I removed the angle, flipped the rib over, and clamped the reinforcement plate in place. Then I used the two holes I’d just drilled i the rib as a guide to drill two holes in the reinforcement plate. Now I was able to cleco the whole assembly together and drill the remaining four holes in assembly.

The finished assembly clecoed together: 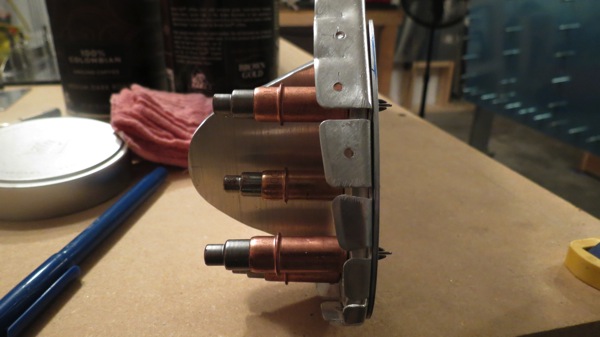 I also used the newly-drilled inboard reinforcement plate as a guide to drill the outboard plate, then I clamped that plate in place on the outboard rib and drilled it too.

I wasn’t quite ready to call it a night though. So what next? I decided to look at the capacitive fuel sender plates. I reread the instructions, got out the pertinent ribs for the left tank, and started by drilling the mount holes in the rib for the outboard sender plate. The assembly is drilled to #21 and then the rib holes are enlarged to 1/4”. The reason for the larger holes in the ribs is that the screws that will attach the sender plate will be surrounded by nylon tubing, presumably to ensure the plate is electrically isolated from the rib.

Interestingly, while there are two sender plates per tank, there’s only one wire that connects both plates to a single-terminal connector that will be mounted on the inboard rib. Somehow I was expecting there two be two wires, one to each plate, with the sender measuring capacitance between the plates. I can only assume that in fact the capacitance is measured between the two plates and the tank structure itself. Maybe the outer screw portion of the connector is the “other” terminal? I’m going to ask on VAF about this. Not that I’m worried about doing things wrong – the instructions are pretty clear – but mainly because I’m just curious, and I like to know how things work.

Anyway, here’s that outboard rib with the plate resting on top of the spacers that hold it away from the rib. Basically just a quick look at how the plate arrangement will look: 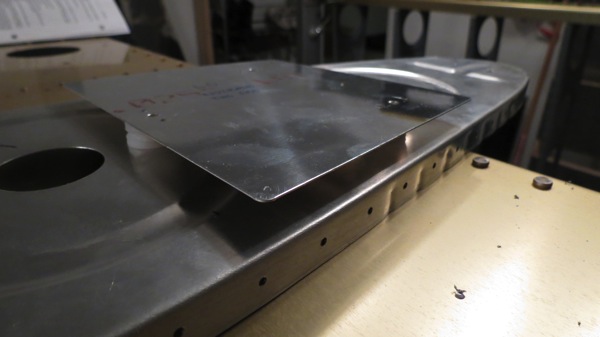 Tomorrow I suppose I’ll keep moving on the sender plates, and maybe after that, I can do the flanges for the fuel cap and tank drain.