So I had a good little mini-vacation this past weekend. I even got in a little flying while I was in Raleigh, doing an Arrow checkout up there. I’d hoped to be able to take my niece up for a flight, but unfortunately the weather on Monday and Tuesday wasn’t agreeable. While I was gone, my shipment from Van’s came in, in a nice wooden crate, which Josie got to manhandle into the house by herself (sorry babe). Wednesday night, I moved the crate into the garage, opened it, put everything away, and then tore the crate down. Hooray, more scrap wood! Then I took the rest of that night and last night off.

Tonight I decided to make all the tank stiffeners. These will be attached to the bottom skin between the ribs to provide, well, stiffness. After all, each of these tanks will hold 21 gallons of fuel, which weighs 126 pounds! The stiffeners come prepunched, but they’re also attached together into long strips that have to be cut to size using notches for reference. I finally learned my lesson here after making stiffeners for the tail: I removed the blue film before I cut the stiffeners to size. Much easier to remove the film from four long pieces than from 48 short pieces.

After a lot of work with the snips and a sore right hand, I had a pile of scrap pieces and a larger pile of very rough-edged stiffeners: 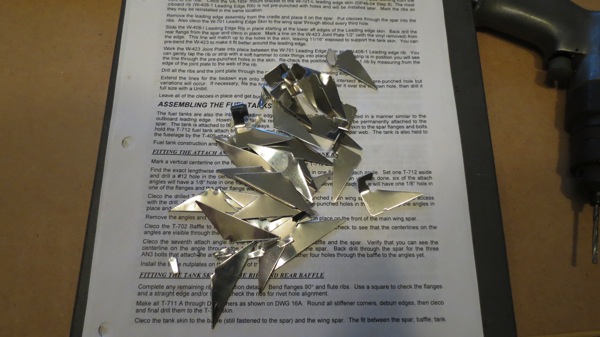 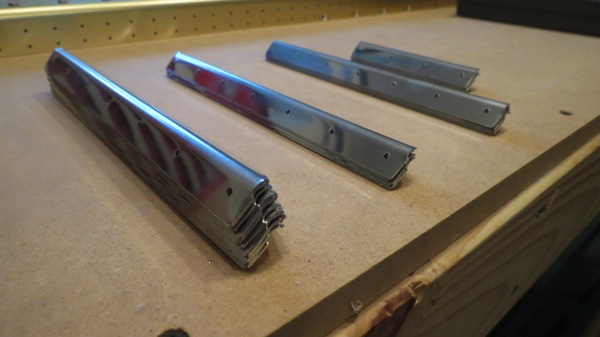 Then it was time to spin up the bench grinder to clean up the edges. I gave that grinder a workout tonight – I probably ran it for about 40 minutes straight. When I was done, I had a bunch of nice smooth stiffeners: 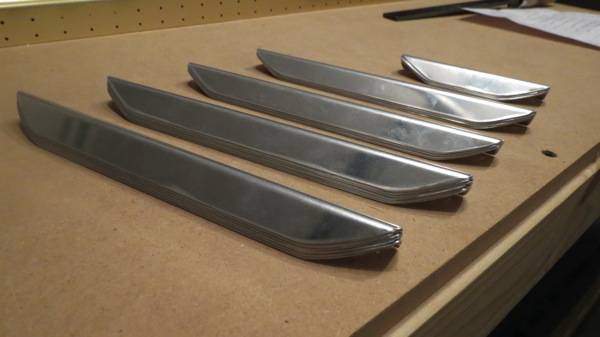 I was about 90 minutes into the evening at this point, but I didn’t quite feel like quitting, so I decided to look at fabricating the T-405 inboard tank attach angles. These get fabricated from raw angle and attach to the nose of the inboard rib on each tank. There’s also a reinforcement plate that goes on the inside nose of the inboard and outboard ribs on each tank. Since the attach angles are made to fit the contour of the nose rib, it seemed like a good idea to clean up the reinforcement plates first to use as a guide/pattern. So I broke them out, removed the film, and fired up the bench grinder yet again to take the corners and tooling marks off. Very nice: 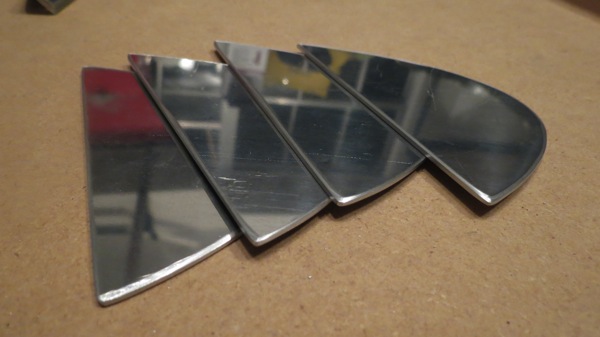 From here, I found the piece of raw angle that the T-405s are fabricated from. I briefly considered getting started on them, but it was getting late by this point, and I was a little worried about cutting corners if I decided to try and make them tonight. So I went inside instead; I’ll probably do the attach angles tomorrow. Actually, now that I look at the weather, tomorrow looks clear. If I can restock on primer tomorrow morning, I should take advantage of the good weather and get the right wing ribs primed. Maybe I can get the right wing skeleton riveted this weekend too. Right now the right main spar is living on the workbench because I don’t have a good place to store it. It’d be nice to have that whole workbench back…