Good news: Fixing that rib issue was pretty easy. I popped out to the garage after dinner and went to work. First order of business was to drill out the other two rivets holding the offending rib to the rear spar. That went fairly well, though it was a pain to drive the rivets out of their holes. I’m gradually learning that thicker materials = lots more grip strength for the rivet shaft = way more work to drive out. This is also another point in favor of putting the manufactured head on thinner material, because having to bang hard on a rivet to knock it out when it’s backed up by a thin rib is kind of scary. It’s really easy to bend the thin rib flange.

Anyway, with that rib freed, I unclecoed the other three wing walk ribs, and as I had hoped, I was able to pull the spar end out of the way enough for me to get in there and straighten the rib face. After that, it was straightforward to squeeze a new rivet; the hole seemed a touch oversize, but by pre squeezing the rivet a bit, I was able to get it set OK.

From there, I went to work on the rest of the wing walk ribs. These were straightforward too, until I got to the two inboard-most ribs. Here, there’s a lot of reinforcement material on the spar; there’s the long reinforcement fork that stretches outboard about 18”, plus another smaller reinforcement plate that only covers these two ribs. End result, there’s a lot of material thickness here. The plans call for -8 rivets here, but when I put one in and checked the length with my gauges, it seemed a little short. On the other hand, the -9 seemed a little long. I debated a bit and finally decided to just follow the plans.

Wrong choice. The shop head I made was way too thin. Time to drill out another one…I got the head off no problem, but tapping the rest out was a serious pain. Remember what I said about more material = more grip? This is where I really became convinced of that. I was really worried about bending the rib flange, so I ended up putting a couple of small C-clamps around the rivet to hold everything in place. It worked like a charm, but also scratched off some of my primer: 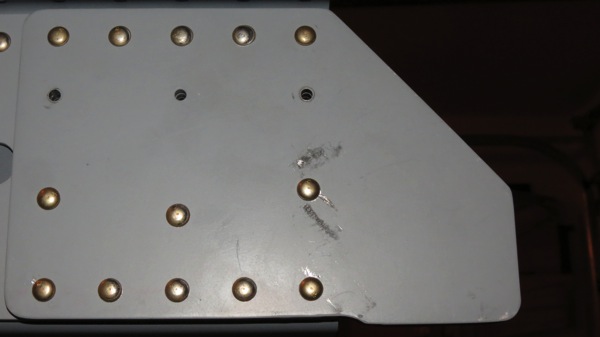 So I used the -9 rivets for those two inboard ribs, and that was the end of my rear spar riveting. Look Ma, no clecos! 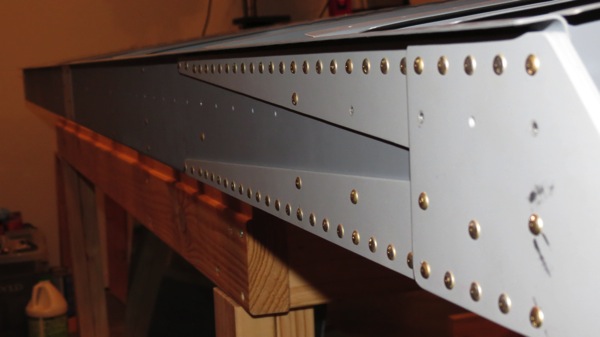 FYI, the still-open holes in both of these pictures are for the flap brace and aileron gap seal, respectively. They get left open since those pieces won’t go on until much later. 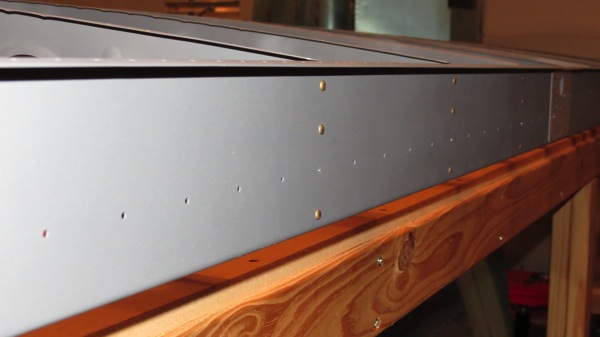 I still had a bit of SEM primer left, so I went ahead and touched up the primer I’d messed up while taking care of that rivet: 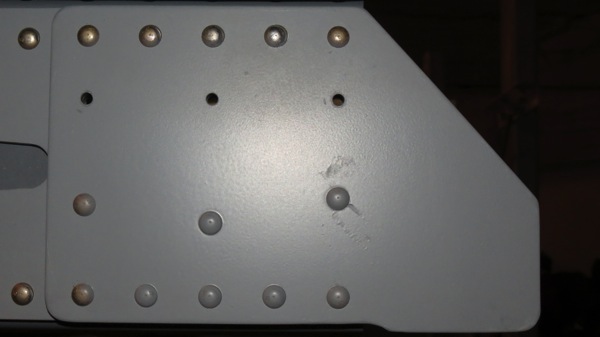 And that settles the left skeleton! Tomorrow I’ll plan on moving this wing back to the stand and getting everything all straight and level for upcoming construction. Then I guess I’ll get to working on the right skeleton. I think things should end up being timed pretty well for me to clean and prime the right wing ribs this weekend, and maybe by next weekend I’ll have both skeletons on their stands. Then the real fun will start. (fuel tanks! Proseal! Oh my!)