Last night, I wrote that Josie and I had inventoried “everything…except for the Big Bag O’ Hardware.”  Whether it was evident or not, I was personally under some kind of impression that we’d gotten a large chunk of the inventorying done.  Boy, oh boy, was I ever wrong.  Yes, it took the two of us a solid four and a half hours to inventory and organize all the hardware.

In fairness, though, the actual inventorying didn’t take all that long…maybe an hour or so.  But I learned a lesson about organization with the empennage hardware.  When that kit came in, I did break out the various solid and blind rivets and put them in a little drawer unit I got from Lowes, but every other piece of hardware I left in the bags they came in.  For some things, like the rod ends and associated lock nuts, this was no problem.  For others, like the small assortment of nuts, bolts, and washers, it was a little more of a pain.  I did a lot of repetitive work…say I needed a particular washer, for example.  Usually that washer would be in a small plastic bag with one or two other washers, and half the time I’d have to dump out the entire contents and count the washers to figure out which one I needed.  Not exactly a recipe for efficient building.

I also grew displeased with that drawer unit.  I’d originally intended to mount it to the wall somewhere, but I never came up with a good place.  So I had it just sitting around, and it wasn’t exactly stable.  Plus, all the drawers were the same size, whereas I had widely varying quantities of rivets.  One drawer held exactly six of a particular blind rivet during its entire lifetime…quite a waste of space.  A few weeks back, when Daniel Schoning helped me with my bad elevator skeleton rivet, I noticed he had a nice storage setup for his rivets, a couple of tackle box-like units from Harbor Freight.  Each of the little bins is removable from the carrier, and the bins are assorted sizes so I can make better use of the storage space.

Anyway, to make a long story short, a lot of time went into sorting the hardware, printing out labels for the individual bins, getting everything arranged logically, etc.  We ended up with basically all of the semi-generic hardware (rivets, bolts, nuts, washers, platenuts, etc) in those two organizers.  Some of the bags that contained special hardware that was already grouped by purpose (aileron attach stuff, pitot hardware, etc) I left in those bags, though we labeled them more clearly as well.  So even though we put in a lot of time tonight – and I hurt in several places from sitting on the floor all night – I expect this to save a lot of time and headaches down the road.

I still have to get out in the garage and get the stuff out there put away in some kind of organized fashion…guess I’ll see about that tomorrow after work. 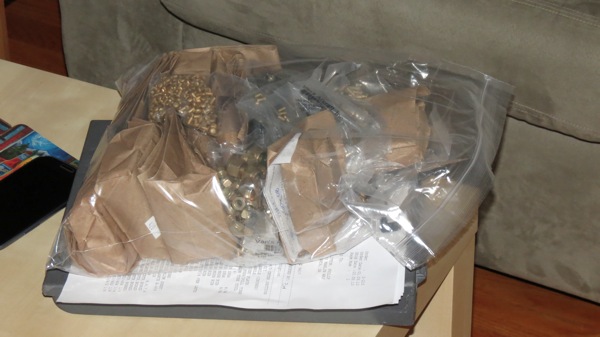 Rivets scattered all over the floor: 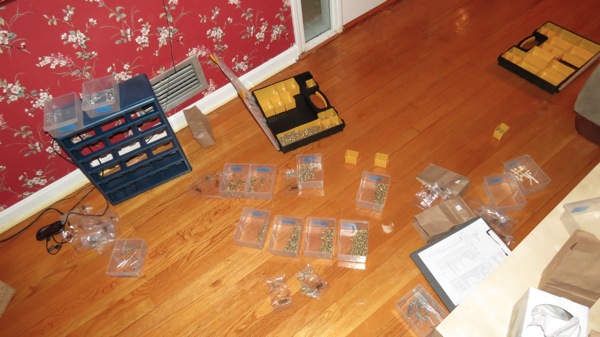 All of the solid rivets fit into one organizer: 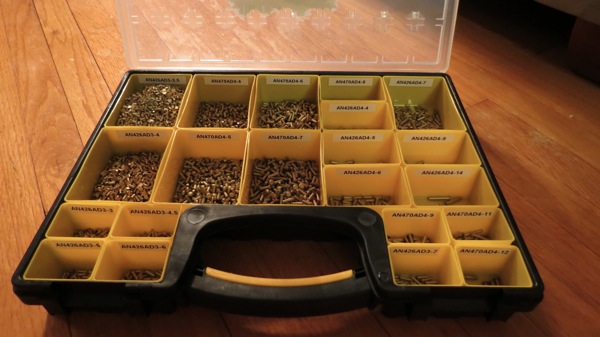 All that hardware from that big bag, but now organized: 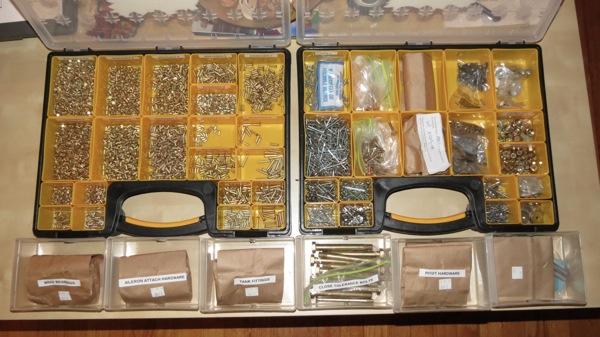