First things, first, I have to send out thanks to Daniel Schoning, who came to my rescue and helped me fix my fouled-up hole in the elevator spar from Thursday night.  I’ve sort of talked with Daniel a few times via the VAF forums, and was vaguely aware that he was nearby and working on a -7, but I’d never met him to my knowledge.  Well, when I posted inquiring about options for fixing my mistake, he volunteered his large collection of tools and rivets to help me out.  I started off the morning at the EAA 690 pancake breakfast, where I met Daniel and we chatted a bit before heading over to his house.  True to his word, we had the hole drilled out to #21 and filled with a 5-5 solid rivet in no time.  I also got to get a glimpse into my future; he’s working on his fuel tanks for his wing kit right now, so I spent a bit of time ogling his partially-assembled wings before heading home to get back to work.

Once back in the garage, I set about riveting the skeleton and skin together.  Things were going along quite smoothly when I had one of those thoughts that generally portends bad things.  “I’m sure making good time out here…it would really be annoying if I forgot to do something inside the elevator…”  Of course, mere moments later, it occurred to me that I had, in fact, forgotten something.  The plans call for a dab of RTV to be placed at the trailing edge of each stiffener pair; this is to help tie the stiffeners together and prevent cracking of the trailing edge.  Yep, I forgot all about that.  And at this point, I’d squeezed about 75% of the rivets between the skeleton and skin…that’s a [b]lot[/b] of drilling out.

Before doing anything, I ran back inside and searched the good ship VAF, where I found that (not surprisingly) this is a very common problem.  Several guys had contacted Vans over this mistake and gotten the OK to continue and not stress over it.  The consensus seems to be that the RTV helps make up for a bad trailing edge bend; with a good bend, there should absolutely be no problem.  One builder who is also a DAR has been flying his RV-6 for about 15 years with no RTV…whew, this was good news.  I was not excited at the prospect of drilling out probably 40-50 rivets.

With that issue behind me, the rest of the rivets were squeezed with [b]almost[/b] no problems.  I did use the wrong length rivets for a few holes, and had to drill out those six and replace them, but that was no sweat.  Drilling out rivets doesn’t make me as frightened as it used to. 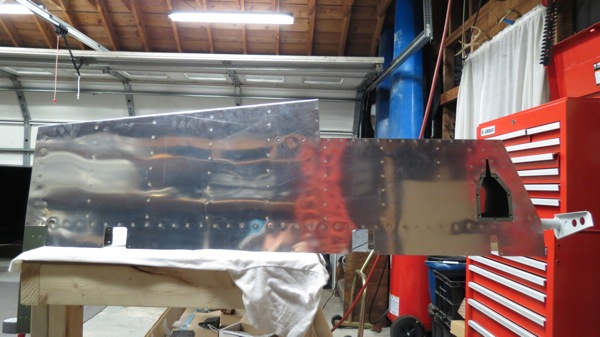 With that, it was back to the trim tab again.  Not really a lot to do here; all the drilling to the spar is done, so everything came apart to be deburred and dimpled.  The top flange of the spar gets countersunk instead of dimpled since the hinge goes under it.  When I did this countersinking in E-606PP, I had some issues; some research in the meantime helped me to much better this time.  I backed the spar up with a piece of 2×4 scrap in the vise, used plenty of pressure on the drill, and everything came out beautifully.  Then I cleaned the spar and the horn halves, dried them, and went to priming. 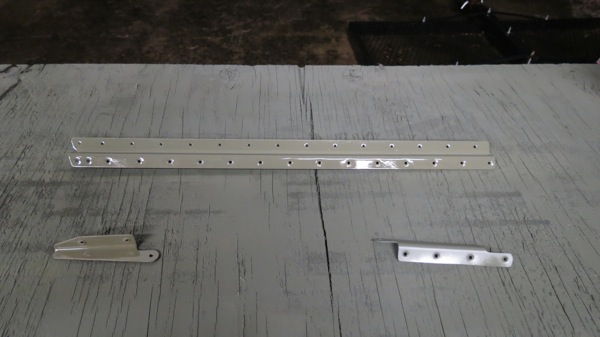 There really wasn’t a lot else I could do until the priming was done, but I did try to do some research and experimentation on final assembly of the trim tab.  Access to the inside of the thing, particularly riveting the horn halves, is going to be interesting.  The other concern is the blind rivets that hold the bent ears on the ends in.  The plans call for CS4-4 rivets, which are #30 diameter and have a flush head.  So somehow I’m going to have to dimple those ears…but they don’t get drilled until [b]after[/b] the spar is riveted to the lower side of the tab skin, so access will be a problem.  A little testing on scrap indicates to me that the skin is too thin for countersinking…that would have been an easy approach, but noooo.  Maybe the pop rivet dimple dies will work.  I’ll just have to do some research and some more tinkering with scrap tomorrow before I figure out what to do on the real thing.