Ugh.  Well, I guess I was overdue for a not-so-great night of work.  Still, in keeping with my “don’t dwell on the mistake, just move on” attitude, I got plenty of other stuff done even after my foul-up of the night.  More on that later.

After dinner (which gave some time for the space heater to warm things up a touch), I went out and decided to work on the trim servo mount first.  That makes it sound more complicated than it is;  there are just three flush rivets for each mount bracket, for a grand total of six.  I probably could have gotten them with the squeezer, but I decided to back rivet them instead.  That went off without a hitch, and then I got out the screws and bolts and mounted the servo.  Easy enough…I did a quick test fit of the entire assembly into the bottom of the elevator skin, and all looks good. 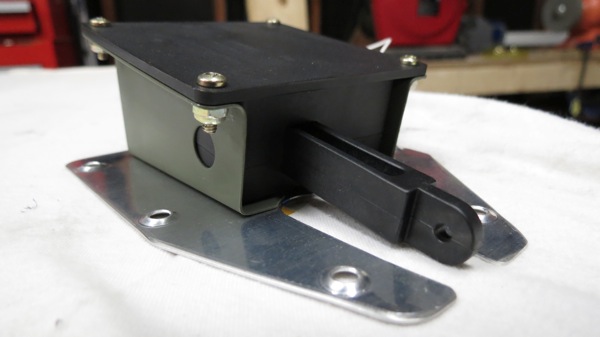 OK, now on to the skeleton!  I really felt like I was going to have a productive night…in no time at all, I’d riveted the E-705 root rib and the control horn in place, and then I moved to the tip rib.  There are four 470 rivets that attach this rib assembly to the spar.  Two of them are simple to squeeze; they go between the rib web and a flange on the end of the spar, and there’s good access on both sides.  The other two are a bit more of a challenge, as they go from the rib flange to the spar web.  On both sides of the spar web, the rib face is very close, and the flange of the counterweight rib gets in the way on the forward side as well.  No good way to get a squeezer on those.

Obviously, I’d already done this once, on the right elevator.  That time, I used the rivet gun with the double offset set to hit from the aft side, with the bucking bar in the more confined space forward.  I was nervous when I did those, but I took my time and they came out great.  I took the same approach here as well; the first rivet I set was beautiful.  The second, not so much; it folded over a bit, so I carefully drilled it out, with no ill effects to the hole.  On the second try, despite being even more careful to hold the bucking bar square, I folded the shop head even worse.  This time, when I drilled it out, the hole looked slightly elongated; a check with my #30 punch confirmed it.  Argh! 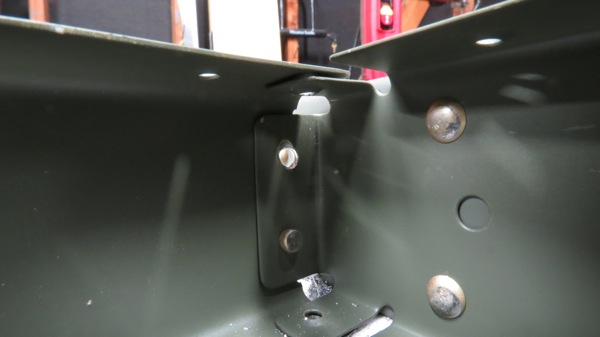 I seriously considered stopping for the night right then and there.  And there was a time that I would have done just that; gone inside and wallowed in my failure, grumbled about ruining parts, blah blah blah.  But it was still pretty early, and I was determined not to end the night on a bad note.  So I sat and considered my options for repair before moving on to drilling the trim tab.

My first inclination is to drill the hole out again and drop a -5 rivet in there.  I need to verify that I can get OK edge distance for that for one thing; moreso, it could possibly just exacerbate the problem.  If I’m having trouble bucking a -4 rivet, a -5 rivet could be even worse and increase my chances for mistakes.  I think an alligator-type pneumatic squeezer might be just the thing for this spot, but I don’t have one and can’t afford to buy one right now.  Maybe I can find someone locally who can lend theirs out for a day.  I’ve also wondered if maybe there’s a good CherryMax type blind rivet I could use here in the larger hole.  End result, I’ve got some research to do, and I’ll of course hit up the VAF brain trust as usual.

So anyway…with that failure behind me, I moved on the the trim tab.  I came up with a good plan for handling the alignment issues while drilling the hinge to the top spar web and skin; basically, after figuring out the proper positioning for the hinge on the tab, I’d mark and drill the first hole in the hinge alone, and also final-drill the corresponding hole in the spar and skin together.  Then, I could put all three together, drop a cleco in that hole, and work gradually from there to keep everything lined up.

I was expecting to have the finished elevator to use while working out the lineup, but I just clecoed the whole thing together for the purposes of working on the tab.  With some creative use of wood blocks, I was able to line everything up and get an idea of the gap between the trim tab and the elevator skin.  I’d read the other night of builders having edge distance issues with the hinge and the elevator, so I wanted to figure out the big picture before drilling everything.  Once I knew the gap between the tab and elevator, I could then figure out how to best position the hinge to avoid edge distance issues.  It’s maybe a bit more work than the instructions call for, but it should prevent future problems when it comes time to put everything together.

So with all that done, I implemented my Grand Hinge Drilling Plan, which worked great.  Then I flipped the tab over and match-drilled the lower spar web to the skin. 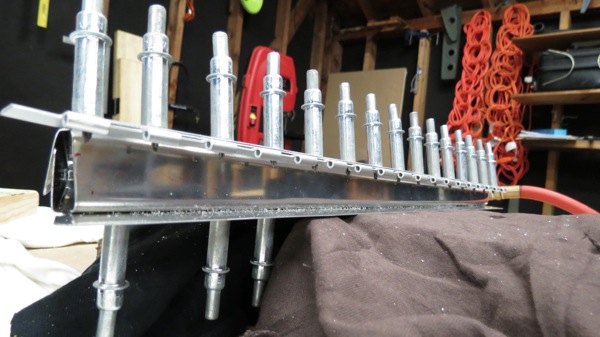 That’s pretty much all I could do tonight, plus it was getting close to 11 anyway.  The parts will need to be deburred and I’ll want to prime the spar, but I can do that this weekend.  I don’t want to start final assembly of the tab until the elevator is really done, so that’ll have to wait until I figure out how to handle my buggered-up hole.