So I took a few days off the project after finishing the rudder, but jumped right back into things today.  Time for the elevators!  This starts pretty much like the rudder did: first step is to cut and prepare a bunch of stiffeners.  I had expected to do these for one elevator at a time, but the instructions actually have you cut them all and do the back riveting for both elevators before getting into the nuances of the individual units.  I considered not doing them all at once, but decided it probably would be simpler to knock them all out at once.  Plus I could just check stuff off in the instructions instead of having to note steps that I’d only done for one elevator, and so on.

So I sat down in my garage chair with a pair of snips and went to work rough cutting the stiffeners.  32 of them, to be precise.  An hour or so later, I had a bunch of rough cut stiffeners and a tired right hand. (Side note: I think my forearm muscles are growing, presumably due to the exercise regimen of snips, cleco pliers, and rivet squeezers.  Maybe I should market this program as RV90X or something.)

There was a bit of confusion at this point for me.  The plans call for modifying some of the stiffeners for the left elevator, specifically the D/E/F units, by trimming some material off the trailing end.  At first, I misread the plans, which seemed to indicate that I should cut about two inches off each stiffener.  This made no sense whatsoever to me; the left elevator is substantially different from the right due to the trim tab, but these stiffeners were outboard of the trim tab.  As far as I could tell, the skins were identical in this region.  So I got out the laptop and did some Googling.  I found where another builder had had the same confusion, and eventually realized he was reading the plans wrong.  The measurements called out in the plans are not amounts to trim off the end of the stiffeners, they’re distances from a particular rivet hole to where the trim should be made.  Measuring that (correct) way, the trims were far less drastic.  Basically I ended up cutting, at most, an eight of an inch off each stiffener.  I’m still not sure what the purpose of this is…I can only assume that the Van’s folks know what they’re doing. (I’d better hope so!)

With that out of the way, I broke out the bench grinder and went to work cleaning up the cut edges, rounding the corners, and smoothing everything out.  This was pretty tedious.  I’m not sure how long I spent standing in front of that grinder, but by the time I was done, there was gray aluminum dust everywhere.  It was so impressive that I felt compelled to take a picture of my filthy right hand: 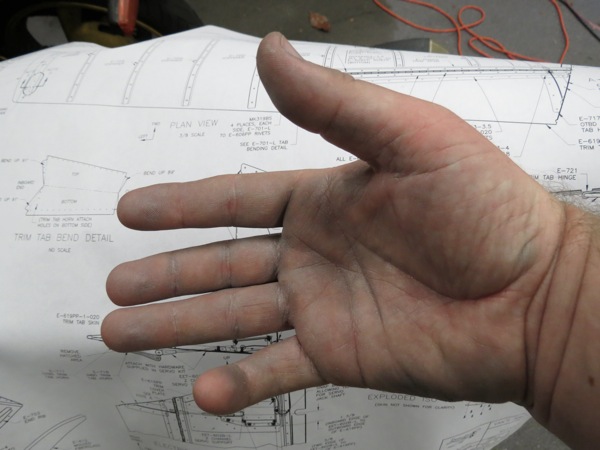 Next up was clecoing all the stiffeners into place on the skins and then match drilling.  At this point, it becomes important to keep track of which stiffener goes where; this was simple with the rudder, since there were simply two of each length stiffener, and I only needed to keep track of whether a particular unit was for the port or starboard side.  Not so simple with the elevators.  Well, the right is easy; like the rudder, there are only two of each length.  On the left, however, there are a number of equal-length short stiffeners that go ahead of the trim tab.  So I had to work out a system for both telling top/bottom stiffeners apart and numbering the equal-length units.  For the record, my plan basically says that odd number of punch marks go on the upper stiffeners, and even numbers on the bottom.  The number of punch marks increments from inboard to outboard.  So the innermost stiffener on the top gets one marks, the next three marks, and so on. (I wrote all this down on the instructions in case my memory fails me)

The instructions also call for clecoing the trim cover doubler in place and match-drilling it at this point.  Presumably this is because it gets back riveted just like the stiffeners.  I must confess that I had to cleco that thing in place three times before I finally got all the holes drilled.  There’s no nice linear pattern here like with the stiffeners.  The instructions don’t call for any more prep on this piece before back riveting it into place, but I think I’m going to go ahead and attach the nutplates for the trim cover before I back rivet it to the elevator skin.  I’m sure this will be easier with the doubler not attached to the skin.  But I have to order some more dimple dies before I can do that…I need #6 screw dimple dies for these things.  One lesson I’m gradually learning is that the list of tools Van’s has on their website is by no means complete.

Anyways, next I went back to the garage chair and deburred all the holes in those stiffeners and the trim cover doubler.  Then I dimpled all those holes I’d deburred. I could have comfortably called it a night there, but I decided that I wanted to get the stiffener holes in the skins deburred as well.  I figure I can get the stiffeners prepped and primed next time out, then recruit Josie to help with dimpling and back riveting all at once.

At that time, I really did call it a night.  I got a lot done today, which I have kind of mixed feelings about.  It certainly feels good to be productive and such, but I’m acutely aware that I’m running out of work to do on the empennage, and I still don’t have the wing kit ordered.  I guess there’s just going to have to be some downtime between finishing the empennage and starting the wings.  I guess maybe I could do the fiberglass work for all the tips, though most folks seem to save that for later when there’s lot of other fiberglass work to be done…we’ll just have to see, I suppose. 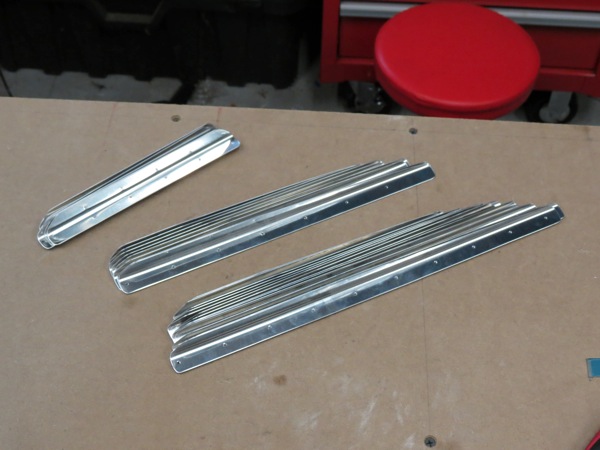 Lots of stiffeners, dimpled.  And the trim cover doubler: 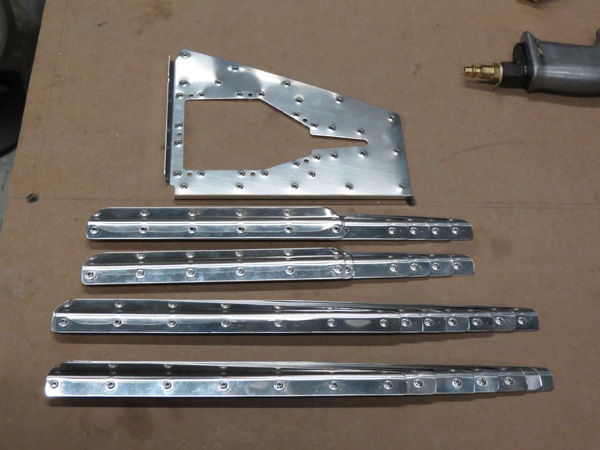