Whew!  Another piece of the puzzle together…when I got out to the garage tonight, the first order of business was squeezing all the skin rivets.  This went pretty fast, even though I had to drill out one rivet when I stupidly used the wrong length.  Whoops.  I ended up using a blind rivet in the last trailing edge hole on the root end on each side…there was no way I was getting in there to squeeze, even with the thin-nose yoke.  Per the instructions, I simply drilled to 7/64 and used a MK-419BS blind rivet.  No problem.  That took all of about an hour.  Now all I had left to do was roll the leading edges and rivet them together.  I figured this wouldn’t take too horribly long.  It didn’t take horribly long, but it did take longer than I expected.

My rolling rig worked pretty well overall.  The only real problem I had was that the very end of each hook was touching the table; this in turn would eventually contact the spar once I’d rolled to a certain degree, thus stopping progress, in some cases before I’d even gotten as much of a roll as I needed.  In a couple cases, I removed the hooks and rolled the pipe sort of freehand to tighten up the roll a bit.  It sounds fairly straightforward when I explain it here, and really, the procedure isn’t that complicated.  However, there’s a lot of somewhat tedious work here- putting the pipe in place, tearing off innumerable strips of duct tape, taping the pipe in place, being careful to get each strip of tape at about the same tension/lineup.

The top two sections ended up coming together nicely, although when I pulled them together the exposed edge wanted to pop up a bit.  So I got out my hand seamers and added a little extra bend at the very edge, which helped that seam tuck in a bit better.  The lower section was a different story.  The rolls there were actually further towards the edge than they really should have been; the result was that when I pulled them together, the edges were rolled in a bit too far.  So I did the opposite down here with my seamers; I used them to straighten the edge a bit.  This got the edges to lie more-or-less flat, close enough that the blind rivets would hold without too much trouble.

Then it was just a matter of going down the line, pulling clecos and setting blind rivets.  And then it was done.  I really wanted to pull down the vertical stab and put the rudder in place just for fun, but it was getting late.  So I placated myself by just screwing in the rod ends that serve as hinges for the rudder.  Here I had a mild moment of potential panic…all three rod ends I screwed in acted the same.  They went in fine for a few turns, then got very tough to turn. (I didn’t force anything)  Suddenly I had a horrible thought: what if the tail kit included two different, but very similar, sizes of nutplates?  If I’d used the wrong ones, there’d be almost no getting to them now.  I’d pretty much just have to start the rudder over again.  A quick look through the parts list shut down this crazy failure fantasy.  I’m still note sure why the rod ends are tough to screw in, but I’ll worry about that later.

The rudder all riveted together: 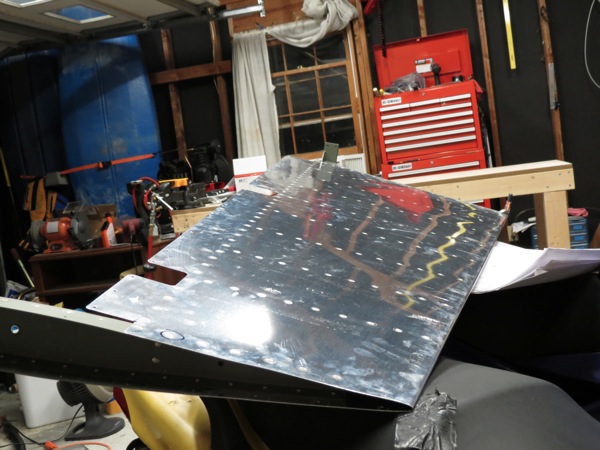 Here I am painstakingly tearing strips of duct tape and laying them between the pipe and the skin: 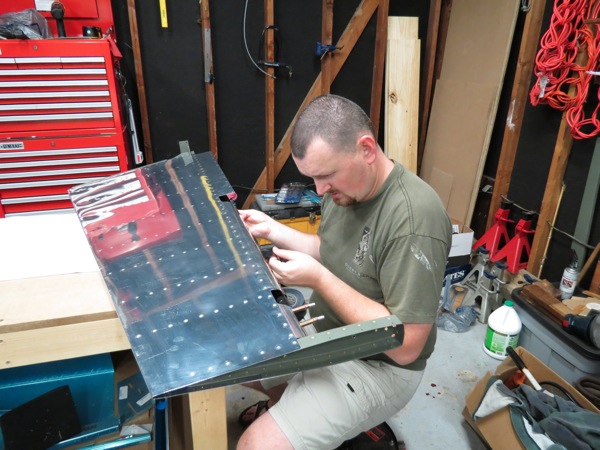 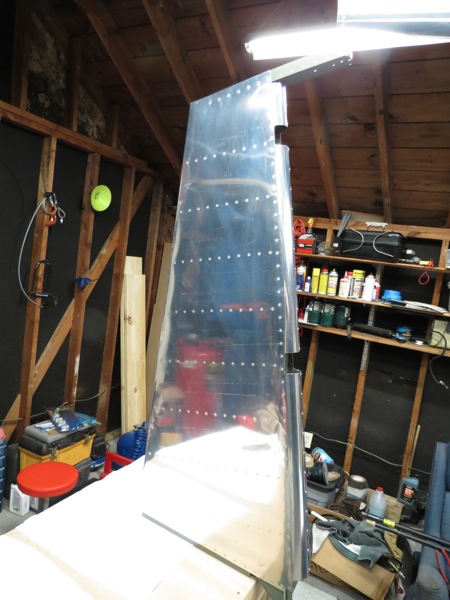