And yes, I really did finish it up after midnight.  More on that later…

All I had left to do today was to squeeze all the skin rivets around the perimeter of the stab, then use a combination of solid and blind rivets to attach the rear spar to the rest of the skeleton.  But first I had two bad flush rivets to drill out, a reminder of what happens when I keep working even after I get tired.  At one point, I thought I was getting pretty good at drilling out flush rivets without damaging the holes, but I must have backslidden, as I enlarged one of those two holes.  Oh well, that’s what I have the oops rivets for.  With those drill-outs out of the way, I proceeded to squeeze all those other skin rivets.  Well, almost all of them.

In general, there are some minor access issues working on the rear of the stab; the lower end of the spar web has a reinforcement riveted in, and where the skin rivets happen to be near a rivet in the reinforcement, the squeezer has to be placed carefully to ensure the shop head stay under the die.  Those weren’t too bad, but there were four that were a real pain.  As if the spar reinforcement isn’t bad enough, about midway up the spar are a set of rudder hinge brackets.  Yup, even less clearance. This was actually where I left off last night; my first attempt to squeeze one of these ended up with the shop head malformed due to slipping of the squeezer die.

Today I was much, much more careful, and I was able to get three of the four pesky rivets done with the Main Squeeze and my thin-nose yoke.  The fourth and last rivet was not so easy.  Despite careful positioning, I malformed another shop head.  Then I enlarged the hole drilling it out.  As if trying to squeeze a -3 rivet i there wasn’t bad enough, now I had to use an oops rivet with an even larger shank.  I wasn’t quite sure what to do with this, so I decided to move on to riveting the rear spar on.  That went pretty fast, but I had yet to come up with any ideas about that last skin rivet.  I decided to call it a night, maybe seek help on VAF, and finish tomorrow.

A couple hours later, I was still thinking about that pesky rivet.  It occurred to me that the shape of the die was really the problem; if I removed some material, I could get in the tight space better and get that thing squeezed.  But I wasn’t about to carve up my shiny new $150 yoke for the Main Squeeze.  Oh wait…why not just modify one of my flush rivet dies and use it with the old squeezer?  Worst case, I ruin a $20 die that’s easily replaceable.

So that’s how I ended up firing up the bench grinder at roughly 12:15 AM.  The modified die worked like a charm, and now I had the satisfaction of going to bed with the completed stab in my garage.  But first, I had to pull the horizontal stab down and set up the good old “pose-with-your-shiny-new-stabs” photo. 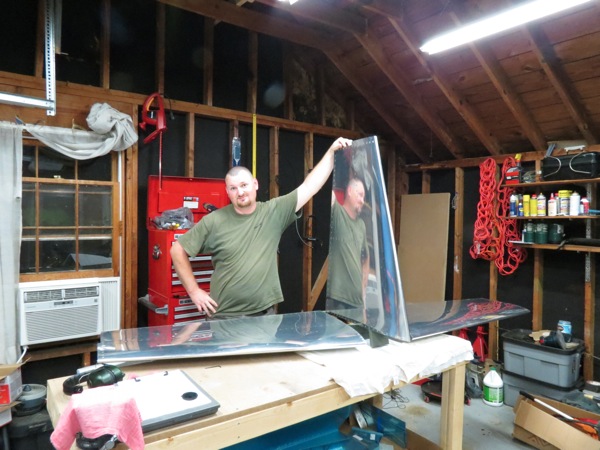