Yesterday, I said I hoped to get the v-stab skeleton done today.  I did not achieve that goal, though I got pretty close.  Still, I put in a solid day’s work on the project, and got my hands dirty with a lot of skills that I’ll use throughout the build.

I left off yesterday with the skeleton clecoed and match-drilled, and the v-stab skin clecoed in place but not match-drilled.  So step one today was to match-drill the skin.  Nothing fancy there, just a lot of drilling interspersed with a lot of cleco moving.  Then it was time to tear the entire stab apart and get going on prep work.  First on the docket after disassembly was deburring and edge finishing.  I elected to set the skin aside and focus on the skeleton, since that would be the first thing I’d assemble.  This was probably a good decision, because just cleaning up the skeleton took far longer than I ever would have guessed.  I spent a solid 2+ hours just on that.  Most of it went quickly; long straight edges were a piece of cake on the scotchbrite wheel.  It took a little more experimentation to clean up the tighter places, like the relief cuts in the rib flanges and such.  Some creative use of files and scotchbrite pads took care of that.  Another time sink here was the VS-808 spar doubler.  The edges of this thick piece had very deep tool marks, which I felt compelled to smooth down.

Next up was dimpling and countersinking.  This went fairly quickly, and then it was time for primer.  I moved out into the driveway (and, by proxy, the Georgia heat) and got to work.  I’m keeping things simple with priming; prep is limited to applying Simple Green to clean up and scrubbing with scotchbrite pads to rough the surface.  While Simple Green is a good degreaser, it’s important to remember that it’s a surfactant; a good thorough rinse is essential to leave no traces.  Once the pieces had dried, it was on to my high-tech plywood + saw horse priming station, where I applied a nice coat of Dupli-Color self etch.  That went well, except for when the sky got a little dark and I felt a raindrop or two, which prompted a rapid relocation of my still-wet spar channels.

While waiting for the primer to finish drying, I went back to work on the v-stab skin.  Off came the protective vinyl, and into action sprang the hole deburr tool.  Deburring those holes in the skin is interesting-kind of a challenge to effectively brace the skin while you spin the tool.  And some stuff is in a bad place to do with my right hand, so it became a difficult choice between awkwardly using my right hand or awkwardly using my left hand.  Edges of the skin weren’t too bad, though there were some high tool marks.  I decided to forego the scotchbrite wheel and work only with files and the edge deburr tool I have.  That worked out pretty well, though when I go out tomorrow I may find that I’m less than satisfied.  I may end up using the wheel after all.

Finally, it was back in the garage and time to start assembly.  First step is to assemble the rear spar parts: the VS-803 spar channel, VS-808 doubler, and VS-410/411/412 rudder hinge brackets.  There’s some pretty thick material here, and as such the rivets are looong, -6 or -7 all the way up through the doubler.  Turns out those aren’t much fun to squeeze either.  The first few weren’t bad.  By the time I’d done ten or so, my hands hurt, and I was having to get my right thigh involved to get enough force to get that last bit of squeeze. (I’m sure this would have been fun to watch)  Squeezing took longer than expected as well, mostly due to me taking frequent breaks to let my girly arms recover.  By the time I got all the doubler rivets in place, I was starting to get sloppy (and hungry), so I called it a night.  I still have to go back and rivet the VS-411/412 hinge brackets tomorrow, then the rear spar will be done.  After that, riveting the rest of the skeleton should be pretty straightforward. I might even have time to start riveting the skin on. 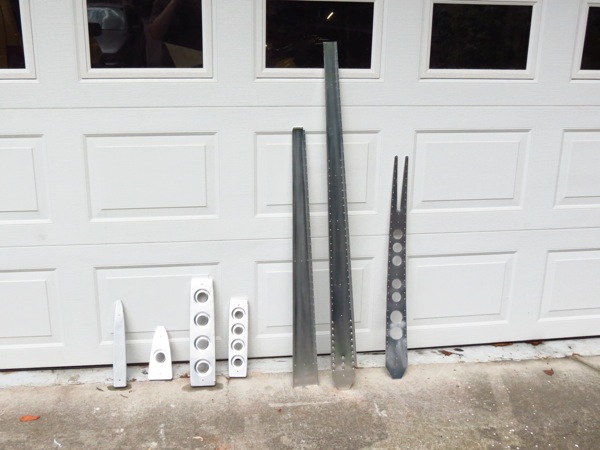 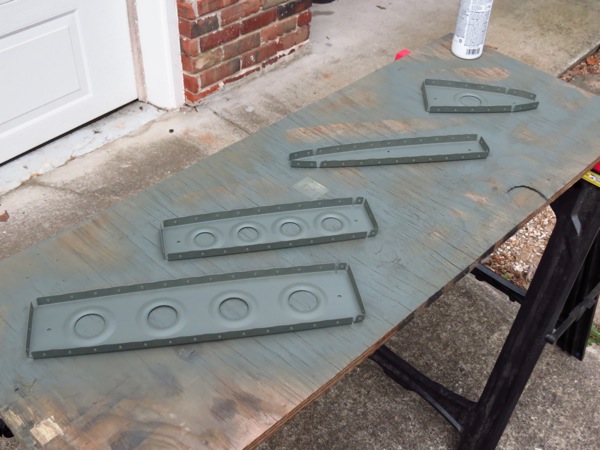 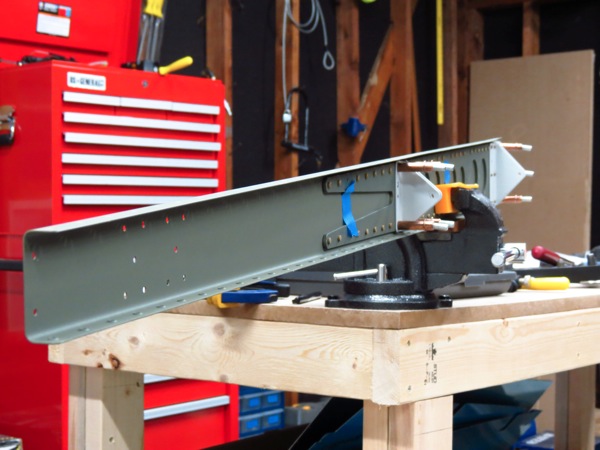