Ruined some h-stab parts, moved on to v-stab for now

Yup, I ruined parts today.  The three or four people actually reading this might recall that in our last installment, my next task was to taper and round the ends of the HS-410 and HS-414 forward spar reinforcements.  That didn’t end so well, but it was a bit of a learning experience.

On Friday, I picked up a shiny new belt sander on the way home from work.  Today, I got to try it out.  Perhaps my expectations were too high, but I was none to impressed with how slowly it was removing material from the reinforcements.  It also heated the pieces up pretty quickly as well.  So I decided to find another approach, but this is where I went astray.  Rather than sitting back, thinking things through, and coming up with a thorough Plan B, I started focusing instead on how I really wanted to get these pieces done today.  Bad idea.  My off-the-cuff Plan B was to rough cut the tapers with a hacksaw and then finish with the belt sander and Scotchbrite wheel.  Problem was, I didn’t have a hacksaw, so I’d have to run out and pick one up.  Then I remembered that I had a Dremel and a load of cutoff wheels.  I tried using that to rough cut, but it was quickly apparent that I couldn’t control the wheel to my liking.

30 minutes later, I was back in the garage with a shiny new hacksaw.  I set upon the reinforcement angles with renewed vigor; it wasn’t much fun, but I finally got the rough cuts done.  Then, I wanted to straighten out the tapers, so I went to work on the belt sander.  Then I had to smooth all those rough edges.  Unfortunately-and I was gradually realizing this as I went along, but too late to do anything about it- by the time I did all that, I’d removed too much material.  The plans call for a 1/4″ radius on the ends, and I ended up down to 3/16″ in a few places.  I should have made my rough cuts a lot further out, then given myself more room to ease material off until I hit the edges I wanted.  I’ll keep that in mind when I redo these…Tuesday I’ll be calling Van’s for my first (and probably not last) replacement parts.

After taking a break and thinking things through, I decided to stop work on the horizontal stab for the time being.  The front spar was the next major subassembly, and while I could have skipped ahead to working with the ribs and such, setting it aside to move on to a different component seemed like a better idea.  Plus the vertical stab looks a lot simpler than the horizontal…in fact, it’s strange to me that Van’s has you start on the more complex h-stab.

So anyway, that’s what I did…and I made good progress.  By the end of the night, I had the entire v-stab structure clecoed together and match-drilled.  Next step was to cleco the skin on and match-drill that.  It was getting a bit late and I didn’t expect to do the match-drilling, but I couldn’t turn down the opportunity to temporarily attach the skin and look gleefully at something that looked very much like an airplane part.  So I did.

Tomorrow’s Memorial Day, which means I have the day off, so I’ll be back to work bright and early.  Hoping to at least get everything in the v-stab prepped and primed, and maybe even get the skeleton riveted together.  Not sure I’ll make it as far as riveting the skins, but we’ll see. 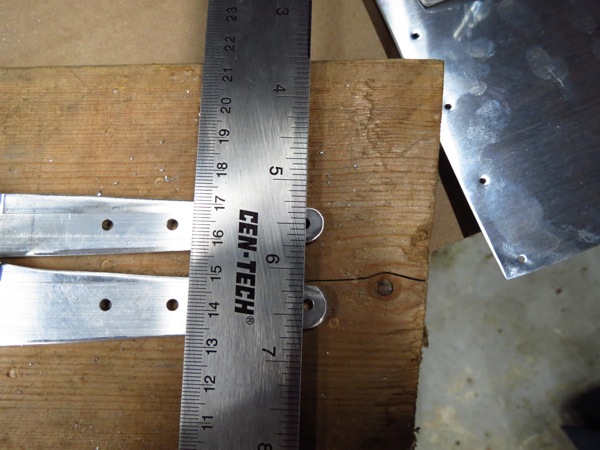 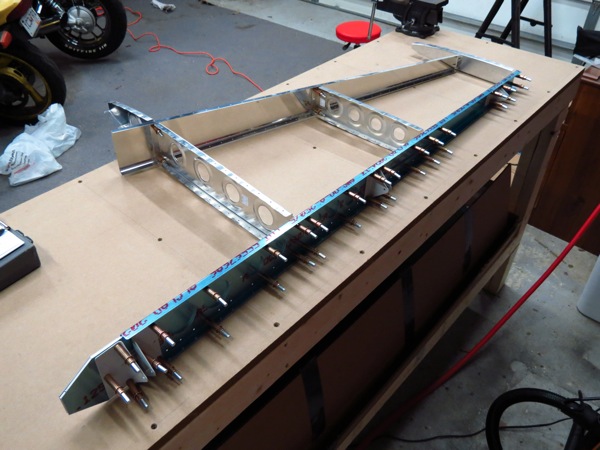 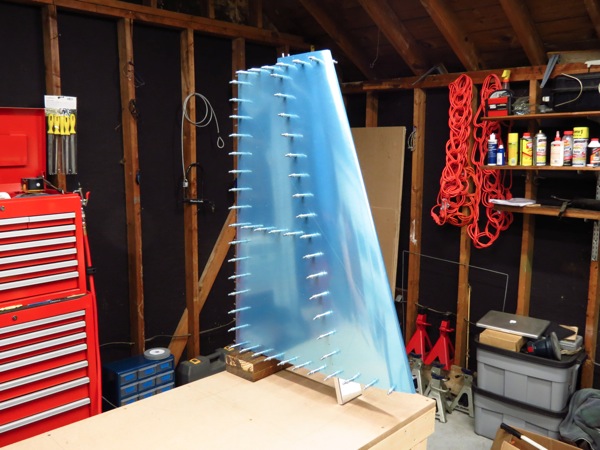