It’s a little scary watching how time continues to fly by, during which I still have yet to actually start work on this project.  I seem to be getting the workspace together, but very gradually…I’ll make a small step, then something will come up and pull me away for a couple days.  The construction of this workbench is a good case in point.

I’ve been looking on and off at workbench info for a while now.  That’s just my nature…I can be quite a serial planner.  But I finally settled on a slight modification of the classic EAA 1000 workbench.  The design is pretty well-known and in use on homebuilder shops across the country.  I did, however, make a few changes.  First of all, since I’m definitely above average in the height department, I decide to make the tables a little taller as well.  Some of the guys at VAF had done the same thing, so it seemed like a sound decision.  Second, I felt a neurotic urge to make the most of the 4×8 sheets of ply I’d be buying, so I decided to make two 2’x6′ benches and use the remaining ply (2’x4′) to make a third, smaller bench.  Finally, I decided to use MDF instead of ply for the table top and shelf surfaces.

After making all those decisions, I spent a fair amount of time working out a materials list for my shopping trip to Lowe’s.  That trip took about three tries…you see, I don’t own a pickup truck.  Josie has an SUV with a roof rack, but I didn’t think I could transport the 4×8 sheets up there without damaging them, so I decided to use one of the rental trucks at Lowe’s.  Apparently those are quite popular.  It actually took three tries before I secured that thing and got my materials home.  That was last Monday.

Tuesday and Wednesday nights were booked up, so Thursday after work I started sawing in earnest.  I succeeded in getting all the MDF cut and in making the framework for the first tabletop, but then I discovered I didn’t have the screws I needed to secure the top. I was getting hungry by this time, and we needed to run out for a few things.  By the time we got home, it was after ten.  Oh, and the one thing I didn’t return with was the screws.  I thought about working on legs, but figured the neighbors wouldn’t appreciate me sawing wood in the driveway at that hour.

Friday night was out.  Saturday was also booked basically all day.  Finally, Sunday arrived, but I was so tired out from Saturday’s activities that I slept in.  Finally, I made the trip to Lowe’s and returned with the hardware I needed.  Sometime about 6 PM, I finally had ONE completed 2×6 table.  At that point I knocked off and mowed the lawn, which was badly needed.  The remaining two tables are still unbuilt…but that might be a good thing, because the garage will need another organizational bout before I really have room for them.  At least the next two should got together a little faster…

I did get in the Van’s practice kit this past week.  Originally I had hoped to do that this Sunday, but as you can see, things got way behind.  Next Saturday we’re going rating in TN, so maybe Sunday will be practice kit day.  Assuming, that is, I can pick up my compressor this week.  And some other required tools…this is already starting to feel like a cat-herding operation.  I can only hope that things will settle down once I get the shop in shape.

Oh, here’s a crappy cell phone photo of the battleship of a workbench I created.  I’m fairly certain that in the case of nuclear holocaust, cockroaches will be using this thing to rebuild society. 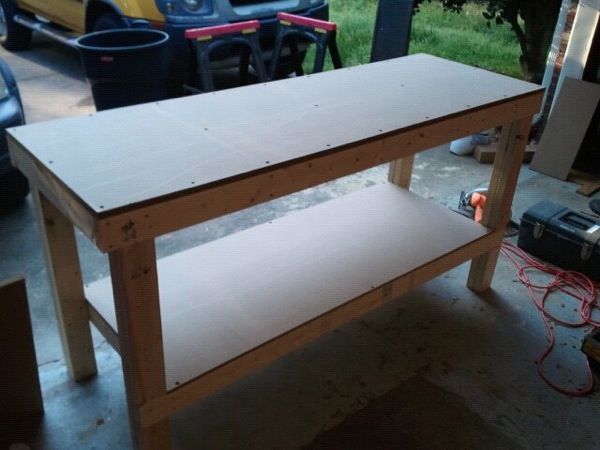