So I’m in this spot with the fiberglass where mostly I’m waiting for stuff to cure at any given point in time. Last night I spent lass than half an hour in the hangar, just mixing up a batch of micro and applying it over the bulkhead I epoxied in place previously. This morning I sanded the micro flush with the fairing edge, and also sanded a little rounded edge on that exposed area for good measure. Doing this exposed some pinholes, of course, so after that was done I mixed up another batch of micro and wiped it into the couple of exposed holes

That’ll need another sanding tomorrow, then I think it’ll be time for an epoxy coat, or maybe I’ll locate and drill the wiring entry hole first, not quite sure the order I want to work in just yet. Here’s the sanded area before I filled the holes: 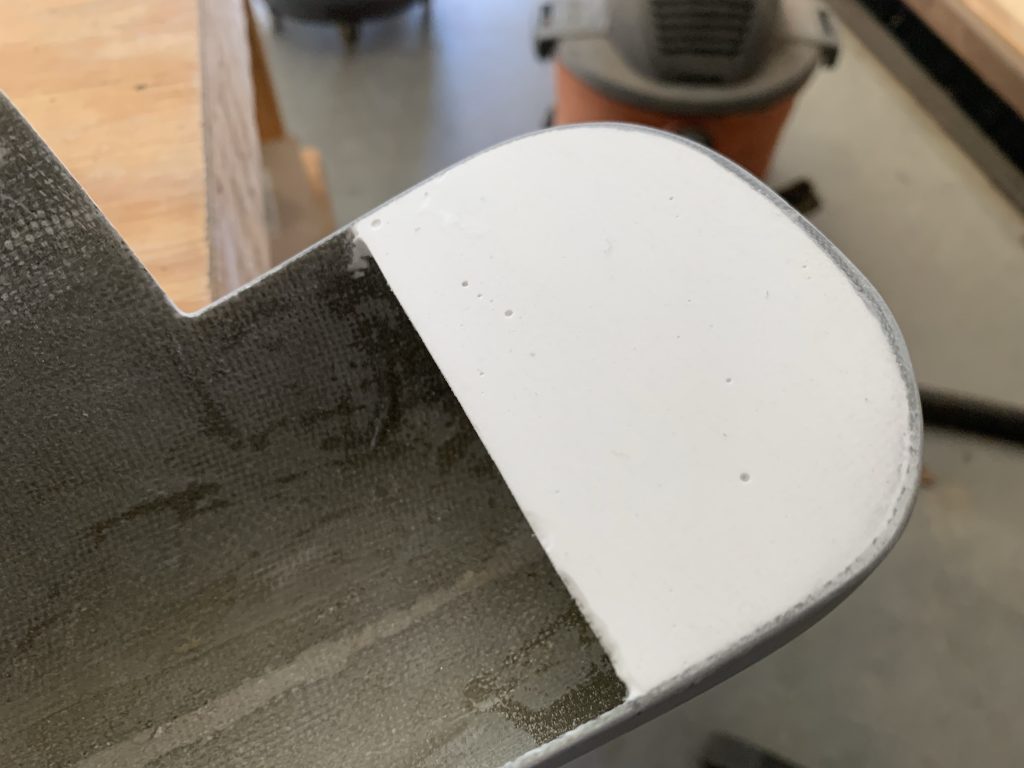 With nothing else to do in fiberglass-land, I decided to finally tackle trimming the control sticks and working installation details for the stick grips. The sticks are provided longer than needed, to accommodate various grip types; the Tosten MS grips I’m adding are pretty long, so quite a bit of trimming is required. First up I worked on the pilot stick; I marked where it interfered with the bottom of the panel, measured the height of the grip, and used that to mark my first trim line.

The fun part here is that in order to install the grip for a fit test, the wiring pigtail use be dealt with, which meant I also had to drill a hole for the pigtail to exit through; I put this on the front of the stick, just above the pivot point. Then there was the fun of fishing the pigtail down and out the hole, and finally I could see how it fit. Somehow, despite measuring carefully and adding an extra inch for clearance, I still ended up with the whole assembly a bit too long; here it’s contacting the bottom of the panel: 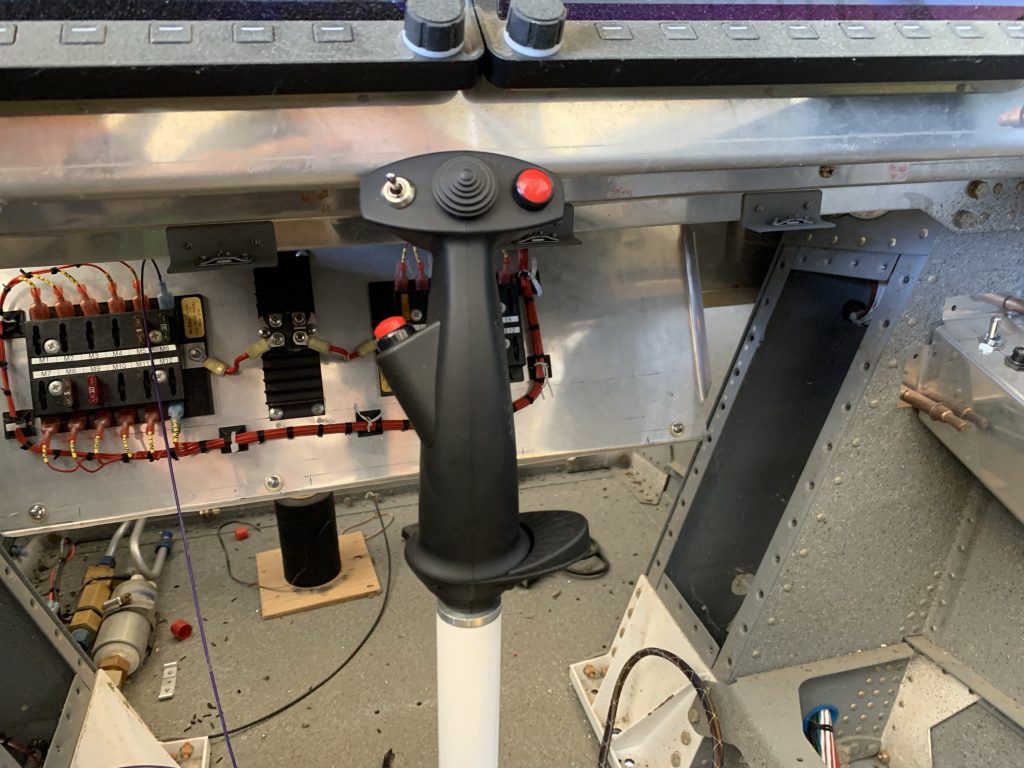 So I got to pull it off, fish the pigtail back out, trim again, and repeat the fishing maneuver. But then it cleared the panel, yay! (side note: look at that pollen on the panel displays…I should start covering this thing when I’m not working it…) 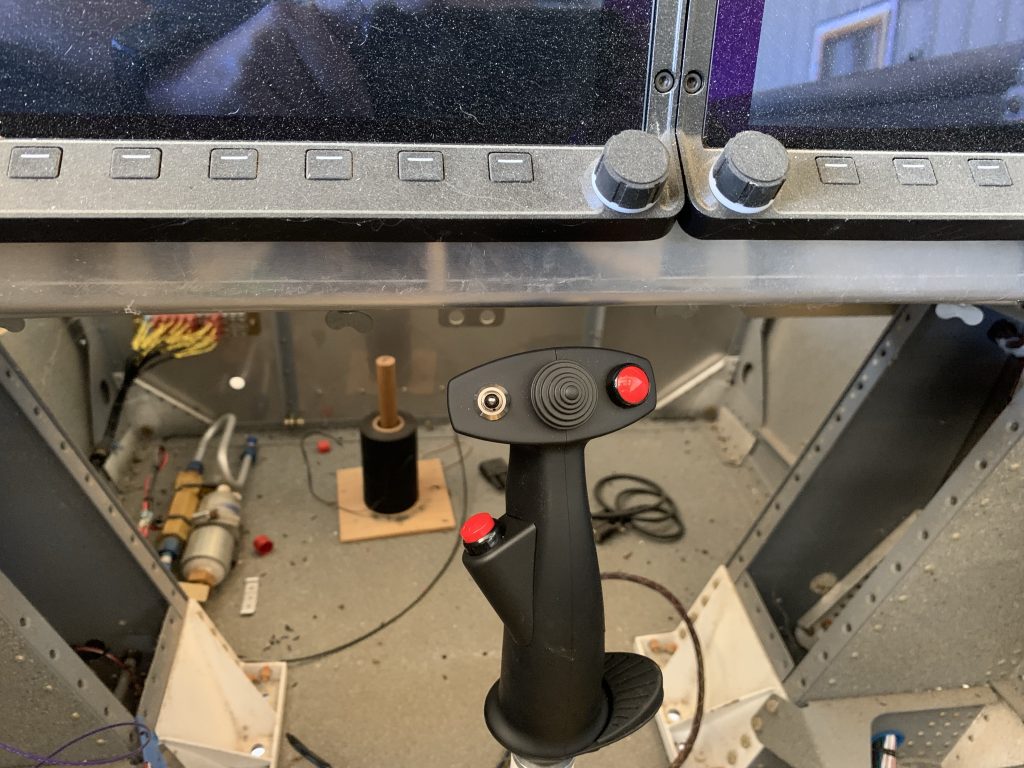 I still wasn’t quite sure about the length, though – from reaching over the cockpit rail, it seems there was enough room to move the stick under the panel even with my thumb on the hat switch, but I kind of felt like the best thing to do here was to actually sit in the seat and try it out. So I put the seat floors in place and the seats, starting with just the back. The rear stick needs to be trimmed as well, but here the interference concern is with the backrest for the front seat. First I climbed in the back seat, and ensured that that stick had good travel all around, and didn’t interfere with the seat bottom. Next I used a yardstick to simulate the location of the front backrest, and made a mark for the desired trim line, then reproached the process of subtracting the height of the grip.

One thing I’m read before was that the rear stick ends up being kind of absurdly short, and it definitely seemed that way once I got to trimming: 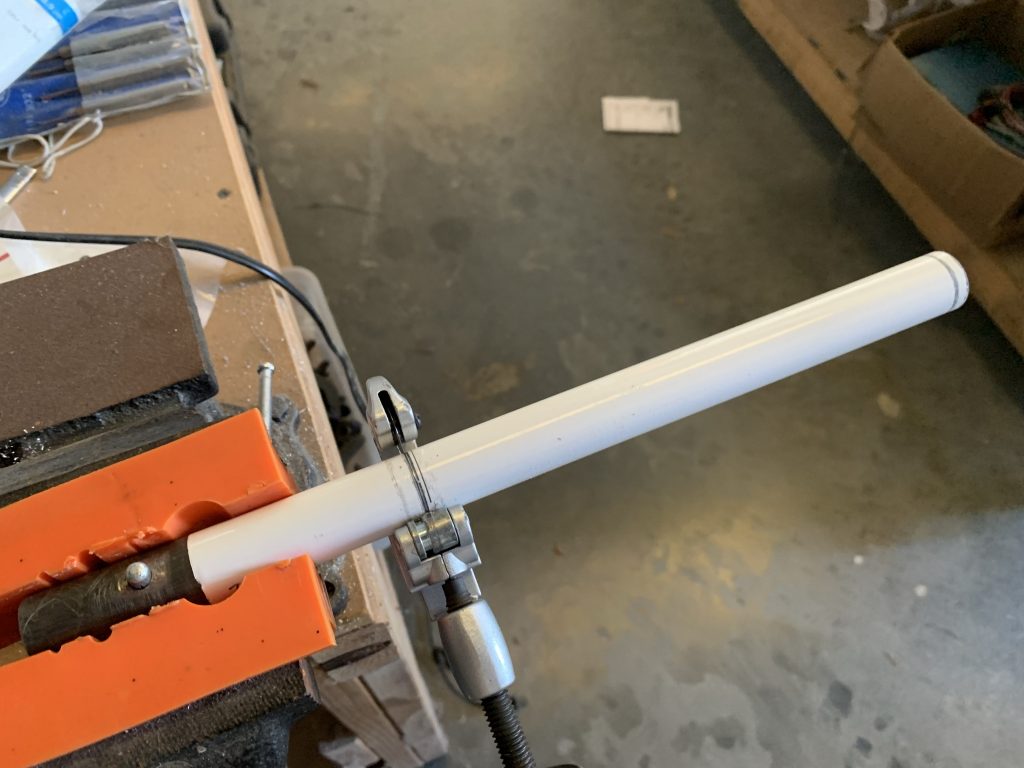 It looked even more absurd once I’d finished the trim: 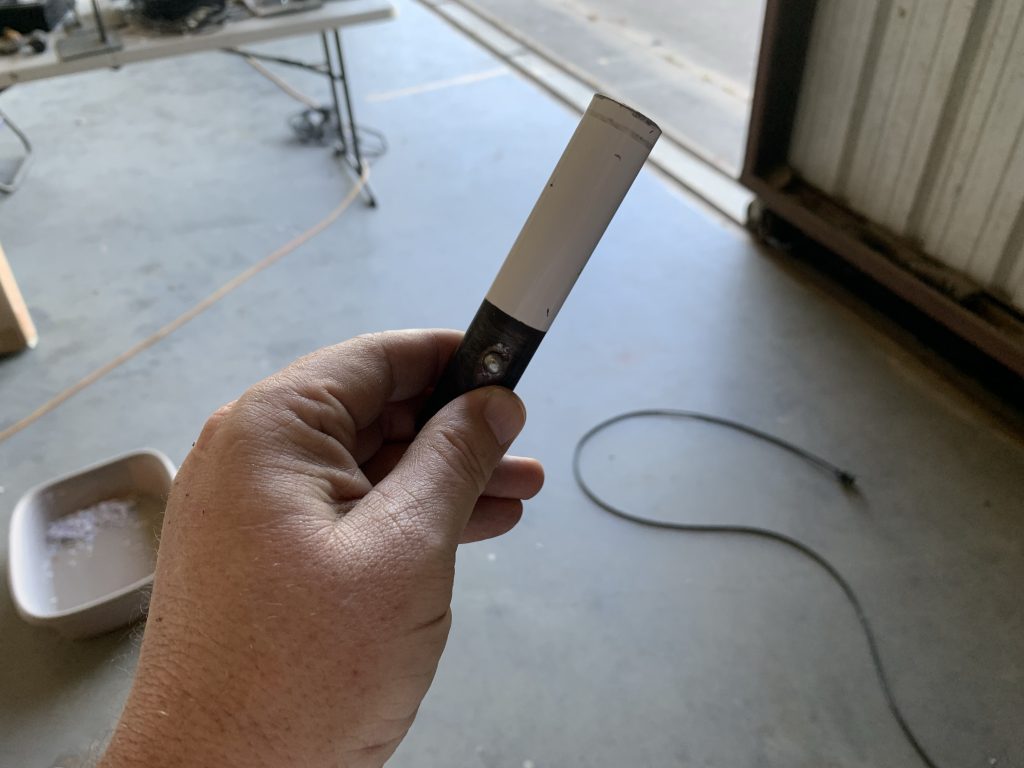 At least in this case, the length ended up being just right, so I didn’t have to iterate on the trims.

Of course, this also meant I had to drill another passthrough hole for the pigtail. One important note here: this hole is kind of sizable, and there is a concern here about weakening the stick itself. In reality, I shouldn’t ever be putting the kinds of loads on this stick where it might matter, but this still calls for some special treatment. I wanted the insides of these holes to be as smooth as possible, with no stress risers that might allow a crack to start. So I rolled up some emery cloth, chucked it in the drill, and used that to really work on those holes: 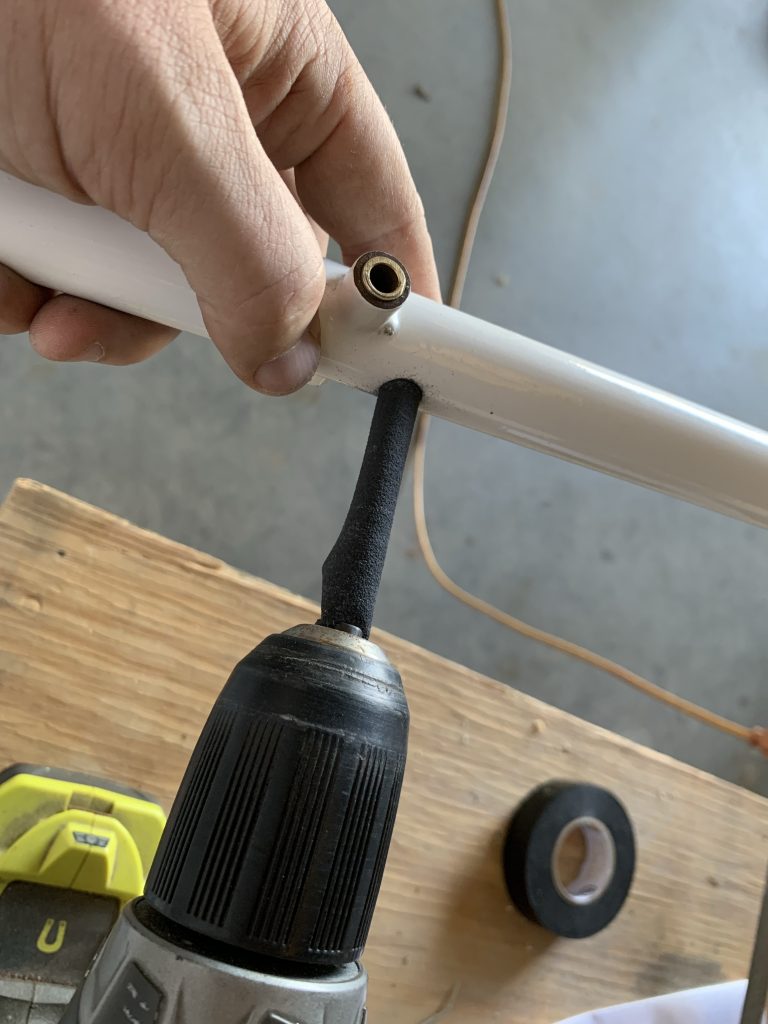 Finally, I got around to trying out the front seat with the stick in place. Turns out doing this was a good idea; holding the stick naturally in this position, if I put my thumb on the hat switch, it hit the bottom of the panel. I probably could have worked around it in the air, but in the end it seemed better to trim just a little bit more. But with that done, I could finally get a decent grip and clear the panel: 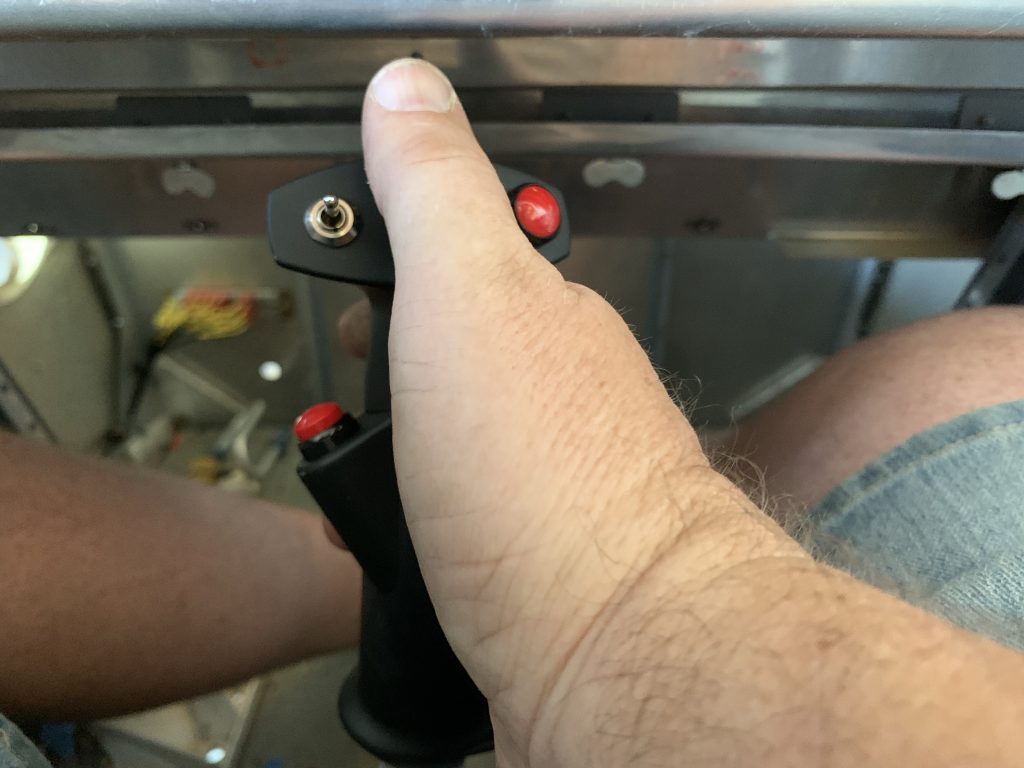 The final bit for both sticks was drilling a hole near the top for the set screw that holds the grip in place. The pilot stick needed a bit of touch up paint where some of the powder coat got damager, but the rear stick I was able to finish up, including adding the snap bushing where the pigtail exits. 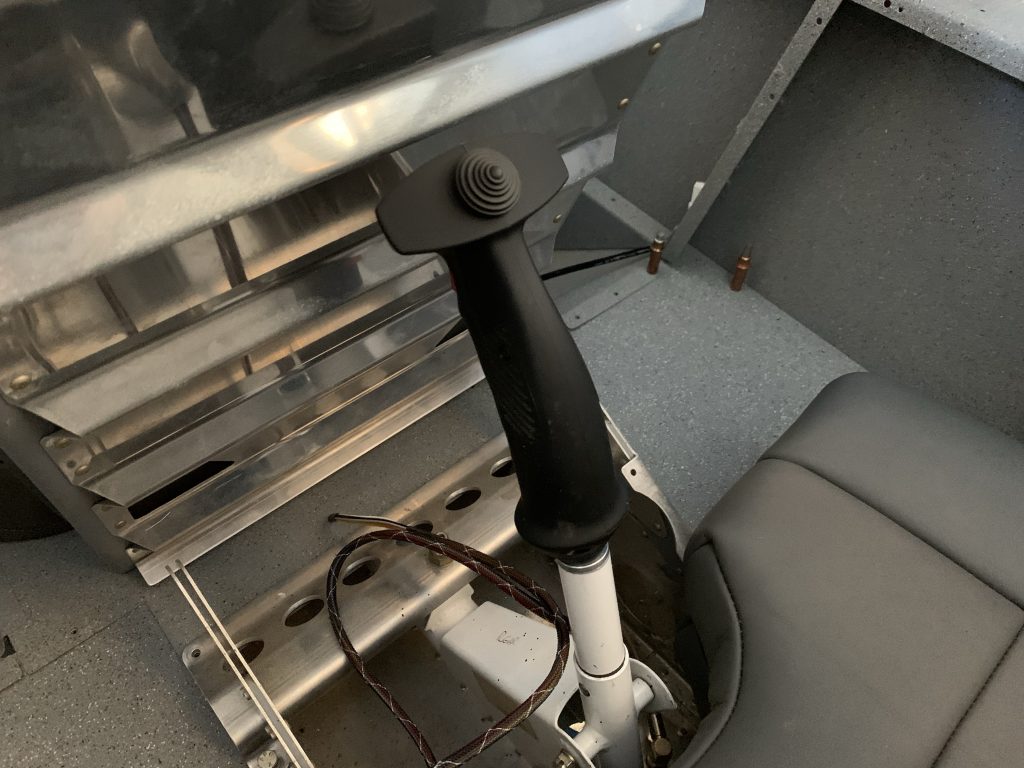 Next step here will be to trim the pigtails – as you can see above, there’s a lot of excess length – and add the terminations for the pigtails as well as the harness in the plane. I’m also going to add a closeout panel around the rear stick instead of leaving that hole open; I think I’ll have a bulkhead d-sub connector there for the removable rear stick. I suppose I need to do that before I can finish up the wiring back here.

Hopefully I’ll be finishing up that rudder bottom soon, and I can keep working on closing out the remainder of the fuselage wiring.