Tonight I picked up with the bellcrank yet again. Saturday’s epoxy had the washers nicely held in place, so I crawled back into the tail and went to work. First up was attaching the forward push tube to the bottom of the bellcrank, which actually went together surprisingly easily given the tight quarters.

Next was the center bearing on the bellcrank, which was where things got more interesting. Back when I first installed this, I found that I couldn’t fit the specified washer stack around the bellcrank – one regular and one large washer on each side just wouldn’t go in the space. So I just removed one of the regular washers and then it all fit fine, and I think at the time I figured that it was a “put what fits” type situation.

Tonight, though, as I tried installing all this, I ran into a problem: the large washer on the left side interfered with the forward attach bolt for the autopilot servo. There was simply no way to get it to sit flat where it needed to be. When I crawled back out of the airplane, originally I was just figuring on replacing the large washers with regular ones. Generally large washers are placed around bearings to help capture the bearing – that is, if the bearing were to fail, having it be able to come out of its housing could lead to a system jamming. The large washers, though, are often omitted if the bearing is surrounded by large flat surface that serves a similar purpose. It seemed to me that the two mount pieces might work well for this – but I decided to double-check the plans first.

Turns out I got this wrong the first time around. Instead of the large AN washers I used, the plans specify special super-thin large washers – which also have a slightly smaller OD. Small enough, it turns out, to not interfere with the servo bolt, or so I discovered during my second trip into the tail. This trip got even more fun when, as I tried to weasel the last washer into its gap and push the bolt through, I decided I needed a long, thin tool to get the job done. Not wanting to climb out and back in again, I summoned help from inside, by calling Josie using my Apple Watch. Sometimes technology really is super useful…

Finally, I connected the servo linkage to the bellcrank, then climbed out and finished the job by attaching the forward push tube to the control column. Then it was time for a control check, mainly to verify freedom of movement but also to double check that, with the sticks full forward, the servo linkage was nowhere near going over-center.

The latter definitely checked out: 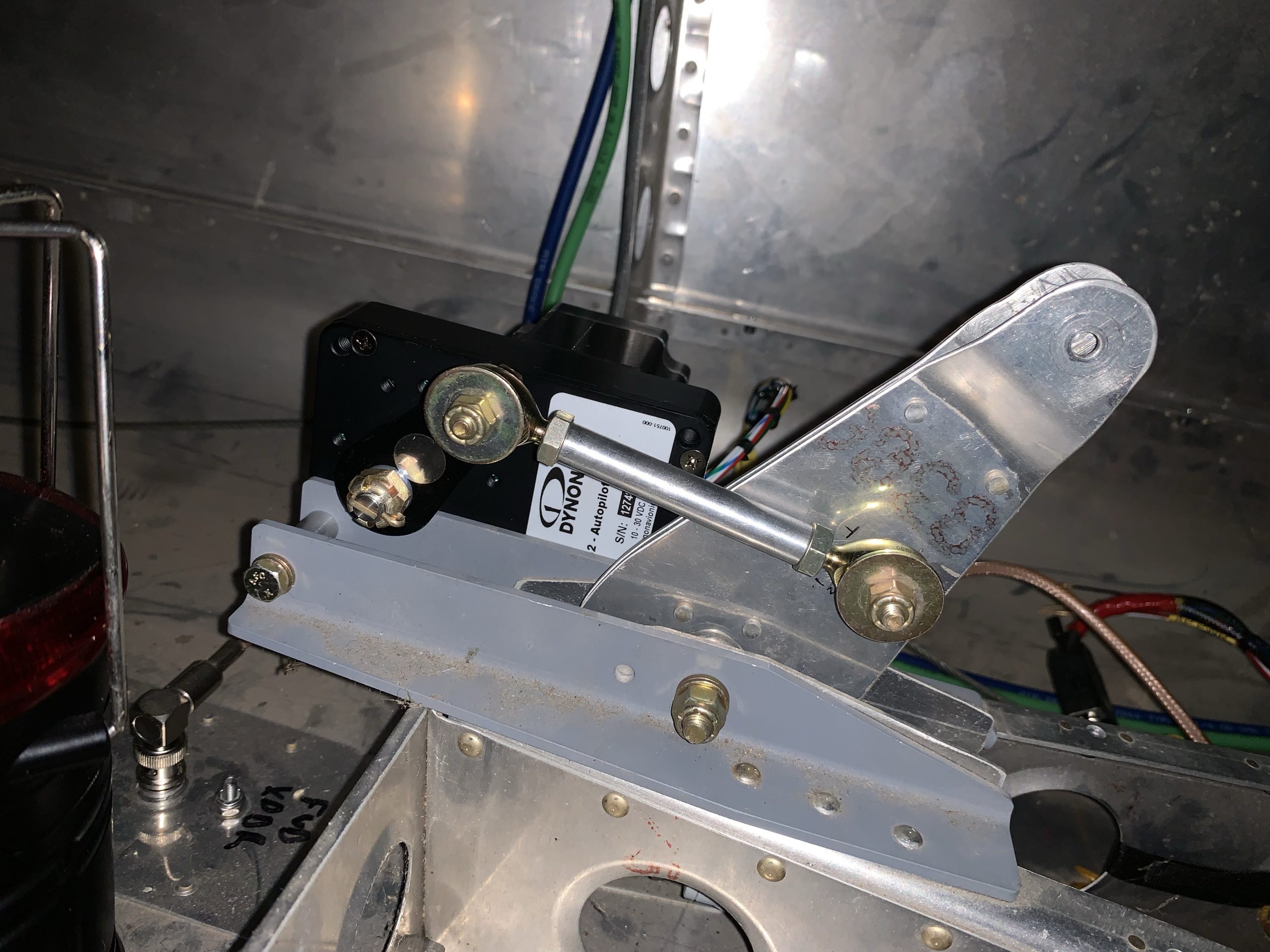 Freedom of movement was a different matter. While I could move the sticks through their full range of motion, there was a weird sort of “bump” feeling a bit aft of the neutral position. Some investigation revealed the issue: one of the rivets holding the two bellcrank halves together is rubbing on the servo mount bolt head, the same one that was problematic with the washer earlier. The contact is light, not enough to block the stick movement, but enough to be noticeable.

It’s hard to get a photo but hopefully it’s somewhat visible here: 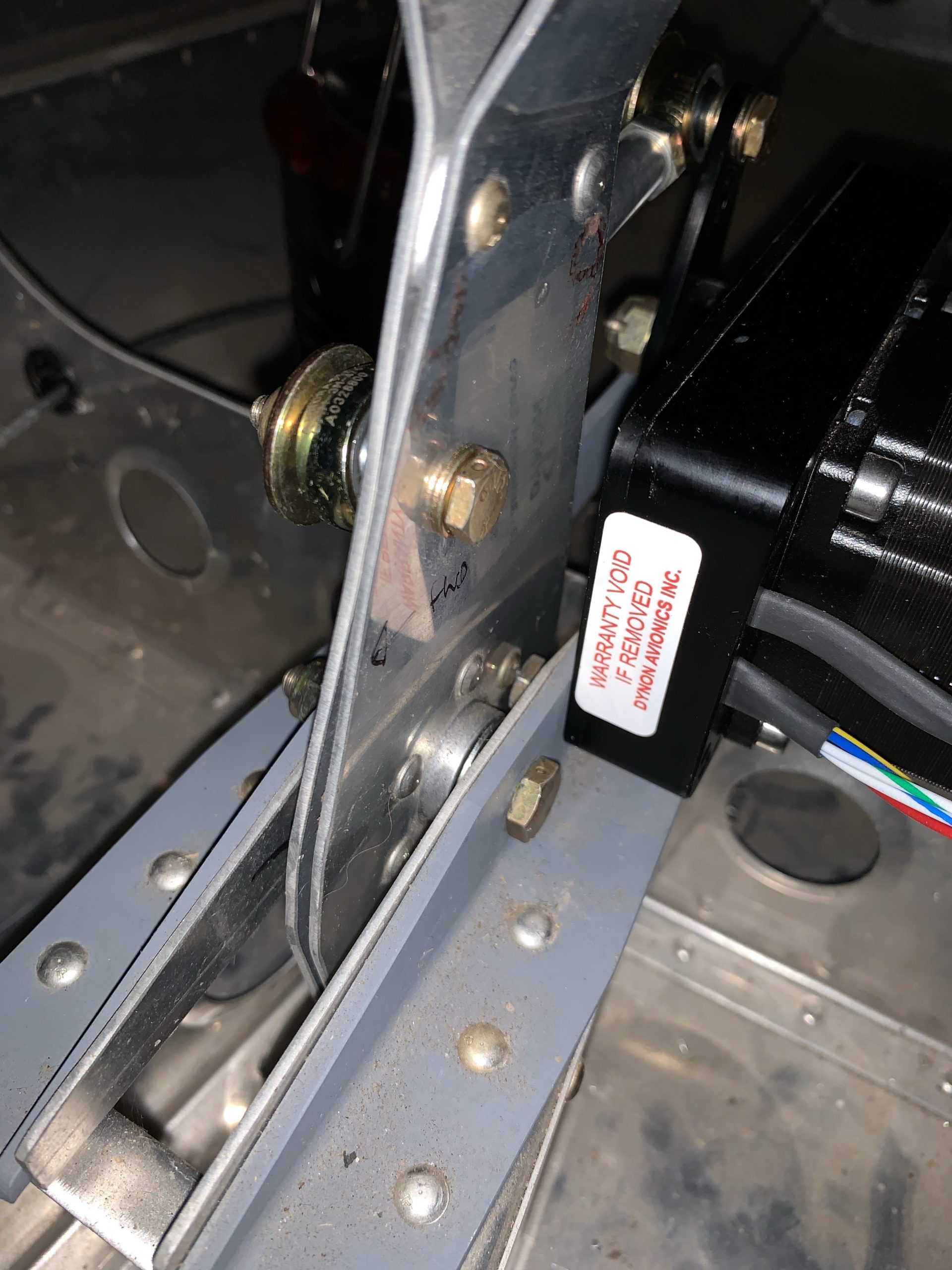 I think I can fix this by just reworking the washer stack around the bellcrank. If I move the regular washer on the right side over to the left, it should offset the bellcrank just enough to provide the clearance I need. If that doesn’t work, then I guess I’ll need to pull the bellcrank out and maybe replace these six rivets with flush equivalents. We’ll see how that goes some other day.