Tonight I picked up with the intent of working towards getting the elevator control system reinstalled. In all probability this wouldn’t be the last time, but to my way of thinking everything from the bell crank back at least ought to be able to stay in place. First up, though, I needed to finish up work back where the ADAHRS units were, specifically routing the pitot/AOA lines and securing them for good.

This was kinda fun, all in all I think I removed and replaced the backboards back in the tail at least twice. I needed them out of the way to initially route the lines back from the seat floor area, but then of course needed them back in place to crawl back into the tail again – except there was one issue, with the way the lines were going to route up the bulkhead, the next-to-aftmost board had to be left out. I could only hope that I wouldn’t need to be that far back.

After putting the boards back and collecting the hardware and tools I needed for the adel clamps, I squirmed back into place to where I could reach the ADAHRS. One thing I wanted to do before buttoning things up back here was to double-check the electrical connections, and this turned out to be a good call. Both the D-sub network connectors were snugged down (I figured the most likely thing would be that I didn’t tighten the thumbscrews), but when I gave the OAT connectors a pull test…a wire came out of one of them. I was kind of expecting to have a bare wire come out – which would have been really fun – but it turned out the pin just hadn’t been seated in the connector. I just had to pull the connector and reinsert the pin, which would have been dirt simple any other time, but here it took about 15 minutes thanks to the cramped space.

Finally, I got back to the pitot lines, first inserting them into the connectors, then pulling the slack back forward and installing the two adel clamps. This, too, was made rather enjoyable thanks to the location. In some ways it was more fun than the connector – instead of lying on my back and reaching over my head, as it were, I was on my side and trying to use a screwdriver in one hand and a wrench in the other.

Once the adel were in place, I crawled out, removed the backboards again, pulled all the slack forward, and secured the lines to the aft bottom skin where I added a zip-tie pad – this will ensure the lines stay well clear of the rudder cable. The lines are visible in the lower right of this photo, and the red silicone tape can just be seen at the zip tie pad: 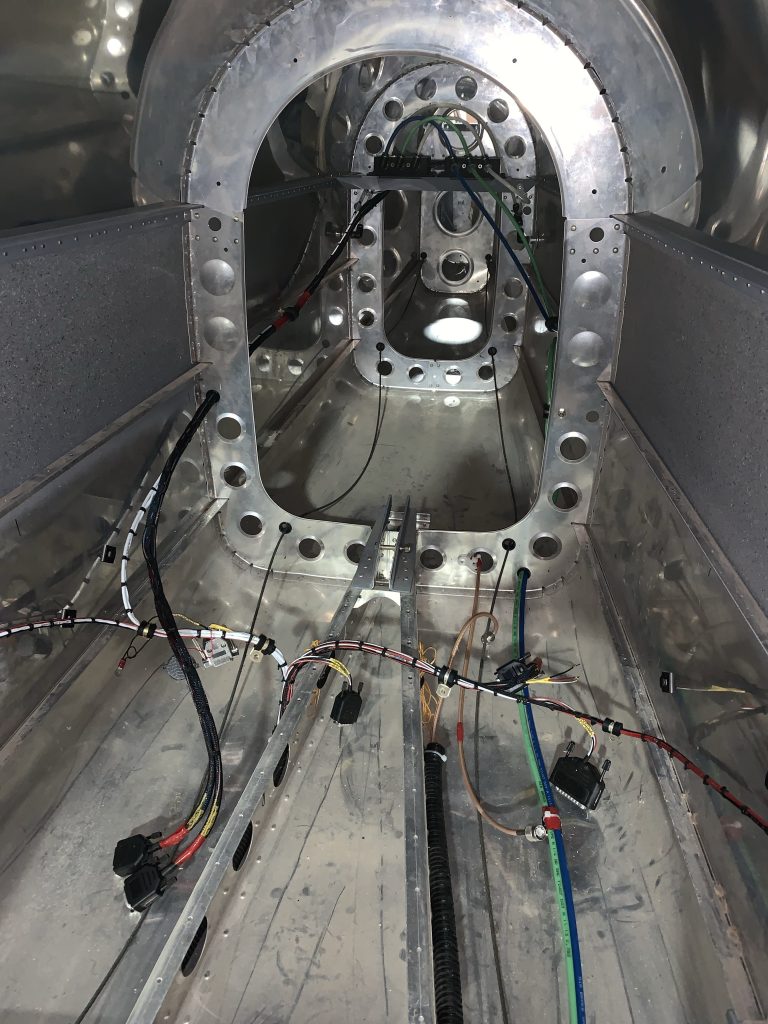 Next, I went to work on the control system. I decided to basically work through the entire fit procedure again, to make sure everything was still adjusted correctly. This meant installing both sticks on the control column on the bench, adding the pushrod between them, and making sure both sticks were parallel. Then the sticks came out again and I got the control column back in the fuselage, and the sticks and intermediate pushrod reattached yet again.

Next were the other two push tubes. A while back I disassembled these and gave them a coat of epoxy primer, after the rattle can primer got scraped up a lot just with the previous fitting work. The smaller forward push tube just gets set to a specified length, so I readjusted the rod ends, tightened the jam nuts, and added torque seal for good measure. This was about the time I decided I wouldn’t be installing the tubes tonight – I’d like for the torque seal to dry first, But I did pull down the larger aft tube as well, and reset the rod ends to where they were before (I took notes on this). This should be the proper length, but I’m not going to torque-seal these rod ends until I’ve verified the length…which will happen another day.

So that was the night’s work. I should be able to finish double-checking this stuff this weekend, and get it installed for good. The only complication I need to consider is the autopilot pitch servo – I need to review those installation instructions and see about getting that permanently installed at the same time I do the bell crank.