So as alluded to yesterday, today I basically started from scratch with this routing issue. After a night of thinking I concluded that I definitely didn’t wan to keep using the conduit, based on how difficult things were yesterday. Routing the lines separately using snap bushings will make it difficult-to-impossible to service/remove/replace them without pulling up the seat floors, but surely no worse than the wrestling I did yesterday with the conduit.

With that in mind, I spent a lot more time tonight staring inside the fuselage and trying to decide where to place the passthroughs. There were really two principal questions: First, for the routing between the rear spar carry through and next bulkhead aft, should I go inboard or outboard of the outer seat rib? Going outboard would mean needing to be sure I stayed clear of the flap pushrod, which would in turn probably require some careful securing of the lines in a tight space. Going inboard would make things easier to get to, but would put them closer to the rudder cables. That said, the rudder cables are less of a concern, since they’d be running parallel to the lines and thus would be easy to keep clear to prevent chafing.

The second question was what to do once through that second bulkhead – at which point I’d be under the baggage floor. I could either continue straight back, go under the avionics shelf, through the next bulkhead, and then route the line upward, or route above the shelf, along the fuselage side, and go through an existing snap bushing hole up high. This was pretty much a tradeoff of where I wanted to do fancy securing of the lines – in the former case, all the careful routing would happen aft of the bulkhead in open space, whereas with the latter I’d have to be much more precise to make sure the lines didn’t spend their entire lives tubing against the backside of the baggage floor.

Well, actually, there was one more question: Did I want to drill pairs of holes, routing each line through a separate small snap bushing, or larger individual holes with the lines going through together? At first I was going to do two separate holes, but upon further thought I felt that a single larger hole would be preferable, mainly to make potential servicing a bit easier down the line, but also to simplify laying out the hole locations.

So after lots of hemming and hawing, I went with 1) routing inboard under the seat floor, 2) routing straight back under the avionics shelf, and 3) using a single hole in each passthrough. With that decision made, the rest of the work was pretty straightforward.

First up are the forward passthroughs. The lines run alongside the rudder cable here, but are separated both laterally and vertically, and the short span between the two bulkheads means there’s not much chance for the cable to rub the lines. Still, I may go back and add a zip-tie pad on the outboard rib, just to keep the pitot lines secure and separated in here: 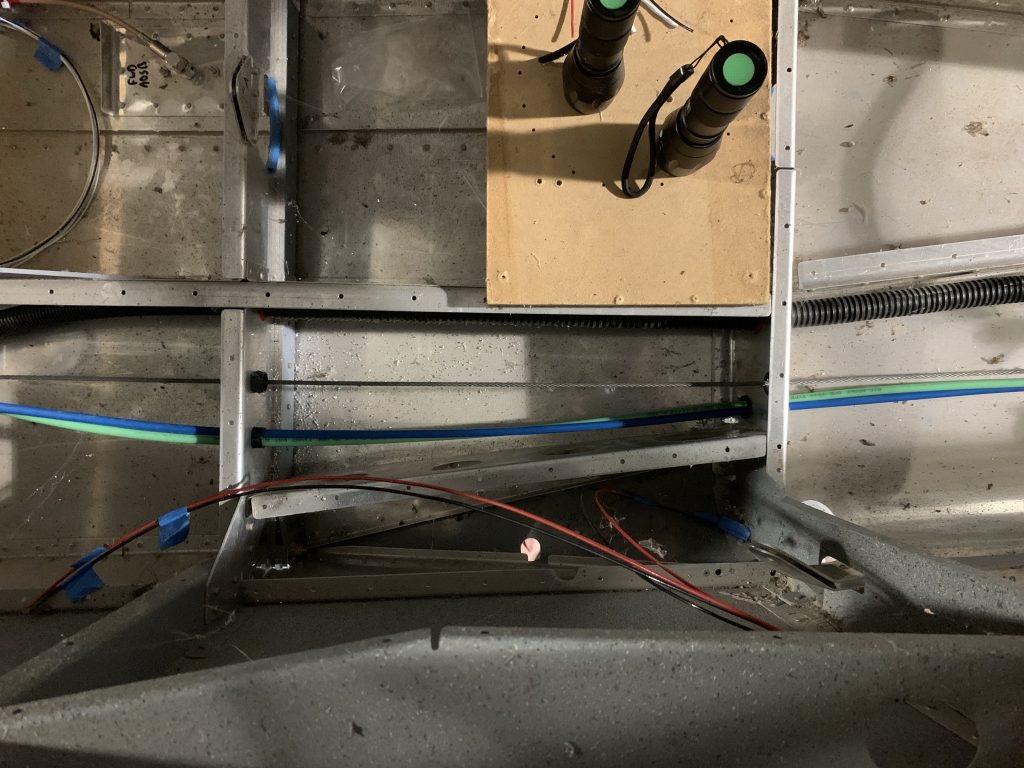 In the next bay aft, the situation is similar, except there’s a much longer run between bulkheads, which means more opportunity for the cables to meet the lines. To help prevent this, I added a zip tie pad on the lower skin, to ensure the lines stay laterally away from the cables. Here I’m just holding the lines in place for the photo op: 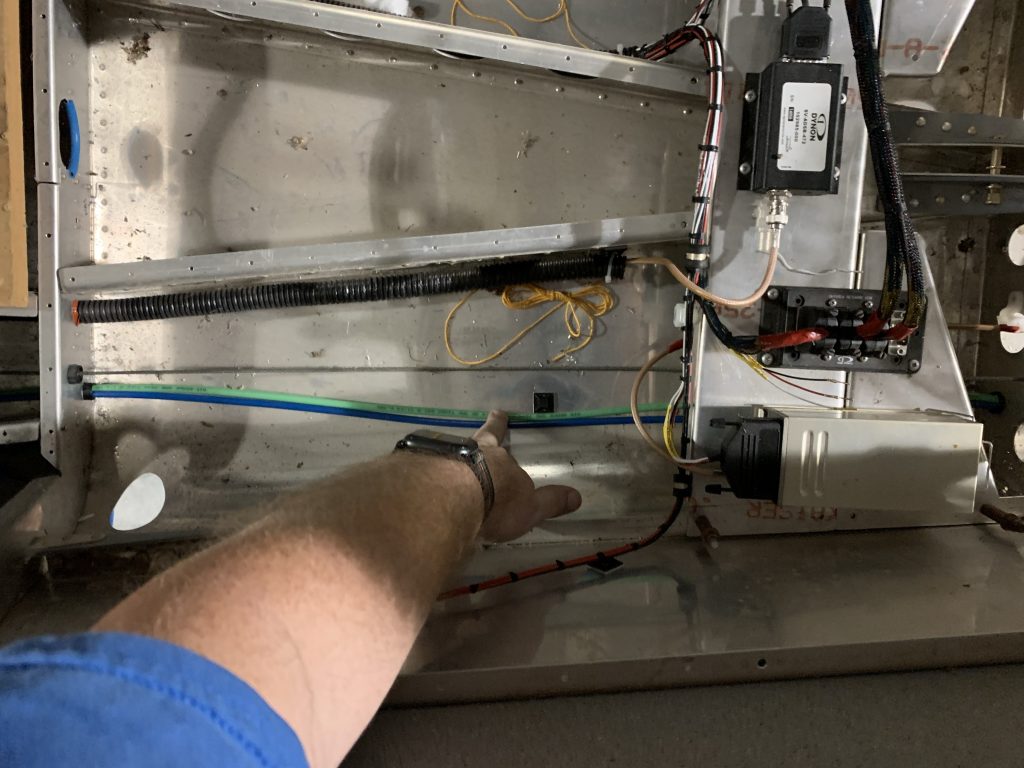 Finally, after going through the last bulkhead, we get to route upwards and pick up the adel clamp I drilled for yesterday. In order to keep the lines securely clear of the rudder cable, as well as the edge of the longeron, I added a second adel clamp further up the bulkhead. With both clamps in place the lines are held quite securely: 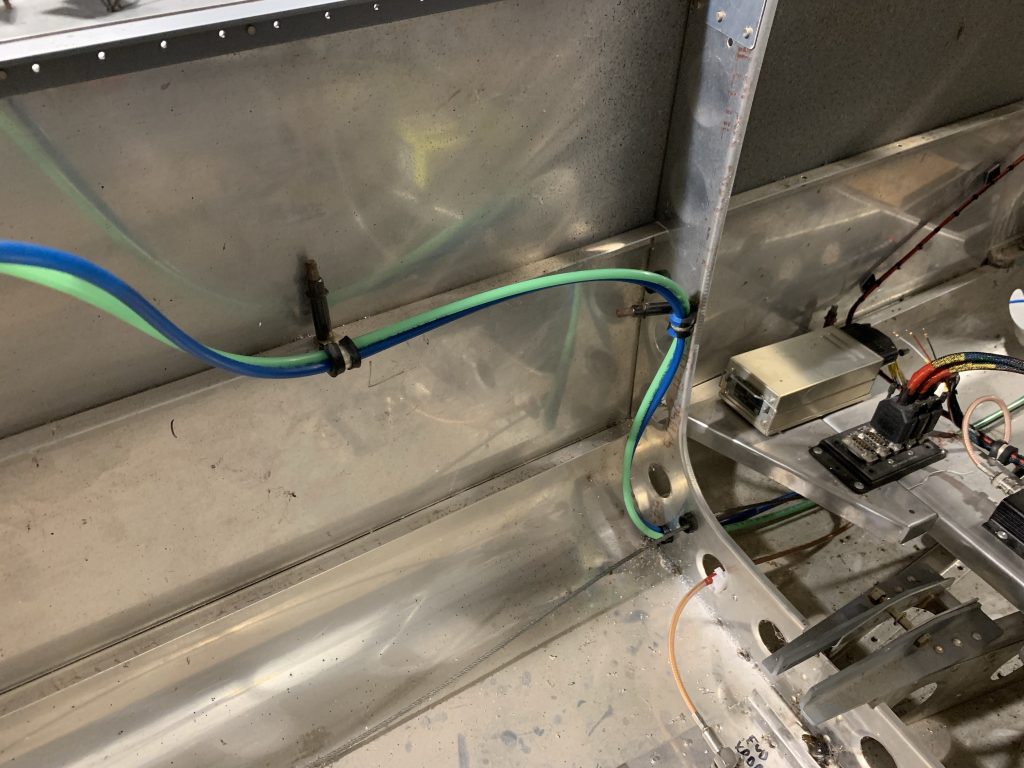 Slightly different angle of the routing: 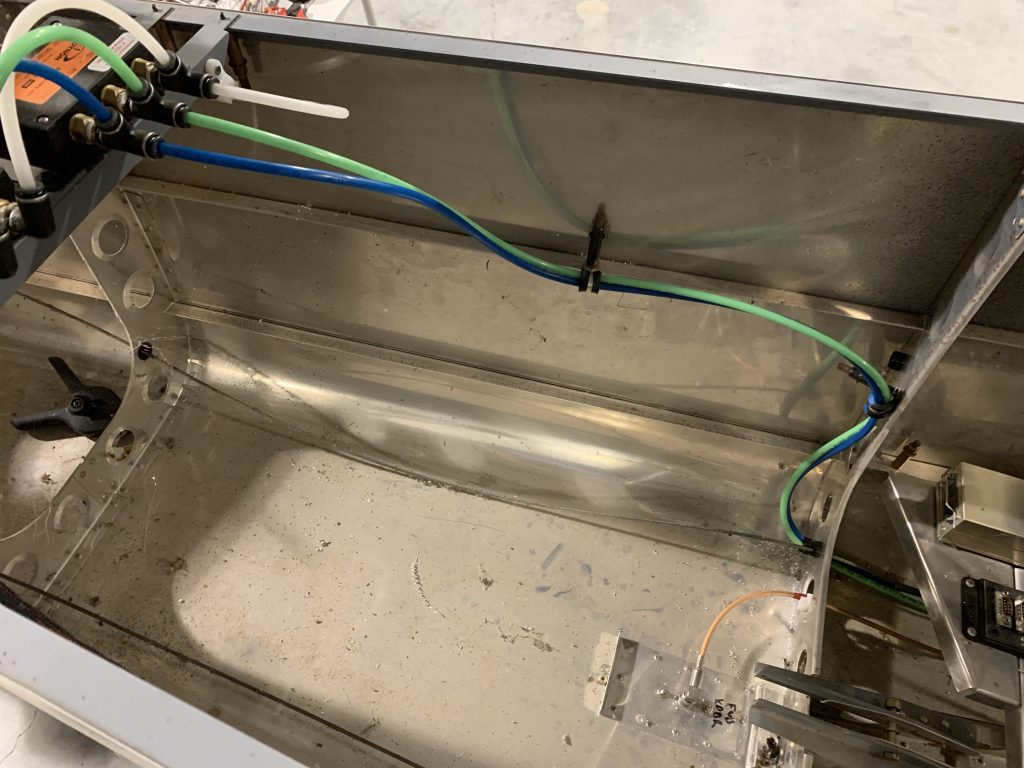 Finally, I also decided to add some security to the short static line run from the bulkhead aft of the ADAHRS mount. Previously the line was free to move around – probably not a big deal since there were no sharp edges to encounter, but I still wanted to tie it down a bit better. So I added a zip-tie mount to the forward mount angle, where I’ll attach the line once everything gets final-assembled. Also, looks like my phone camera chose poorly with the autofocus, oh well: 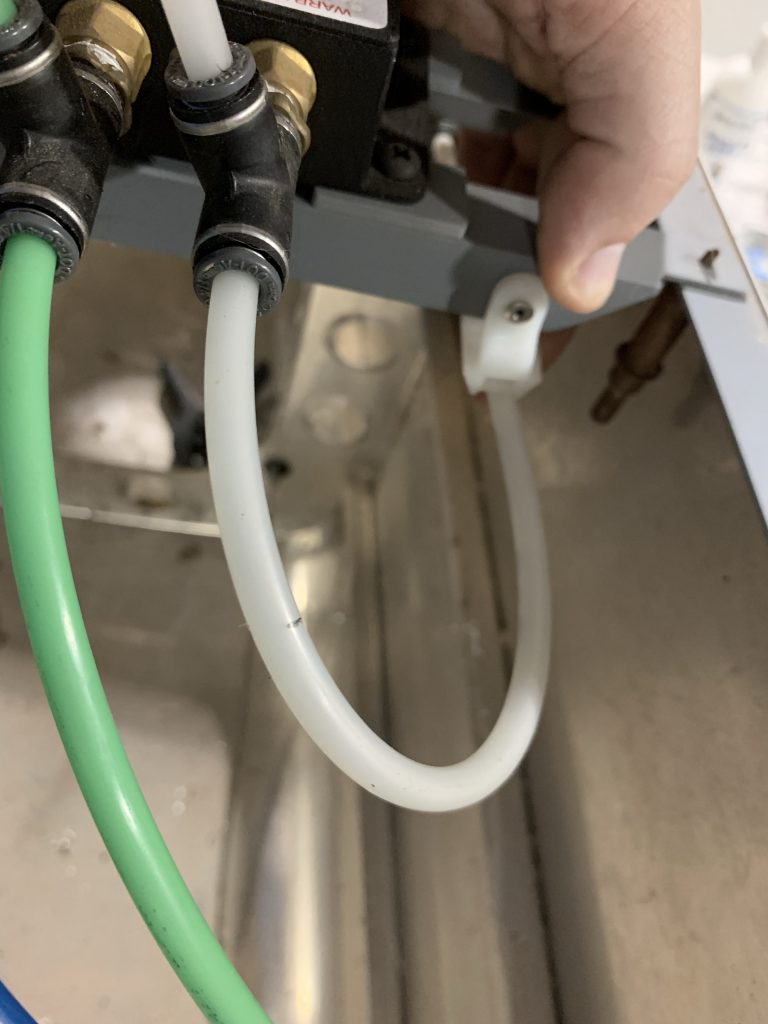 So now…well, I guess I’ll pull those two lines right back out and start clearing and cleaning the inside of the tail for getting the turtledeck skin in place. Though I’ve still got to do all the deburring and dimpling on that skin, but that won’t take long at all. Also I need to clean off my big work table for the work on the skin, which will also be handy for the impending canopy work.