Tonight I wanted to try and nail down the routing for the tail strobe wiring. I’ve been doing some reading and poking around at the best way to skin this cat for some time now, and in fact this is the sole reason I reinstalled the tail feathers a week or so ago. Basically, the question here is how best to pass this wire through the aft bulkheads and then down into the lower rudder fairing. I’d been leaning for some time towards going through both the fuselage bulkhead and the vertical stab spar above the lower rudder hinge point, and then routing the wire down towards the fairing. The idea was to have the movement of the rudder be taken up by a twisting motion on the wire, rather than having a repeated flexing situation.

Unfortunately, the more I looked at things, the tougher this seemed to be to pull off. For one thing, I’d have to go pretty far off-center to get around the hinge point, and for another this would mean routing the wire pretty close to the elevator control horns and push tube – which would in turn mean that carefully securing the wire would be more important – which in turn would be pretty tough to work out in the tight confines of the aftmost bay.

So after some more thinking, I had a new idea – what about having the wire exit the fuselage pretty low? Doing it this way, the wire would only pass through the fuselage and skip the stab spar entirely, which would be helpful for later service – if I needed to pull the stab, I wouldn’t have to pull the wire back out through the spar, potentially removing terminations. The question was how the routing would work after that.

While doing some more reading, I looked again at another builder’s approach and realized a genius to it I hadn’t picked up on before. By adding the bulkhead in the fairing, and putting the wire penetration point in line with the hinge line, the twisting of the wire would be minimized (or at least spread over a longer distance. And I decided I could combine this with my previous idea by adding an adel clamp, secured using one of the internal rudder stop bolts.

To test this idea, I mocked the setup using some scrap wire. Mainly I wanted to verify that I could keep the wire away from the lower rudder hinge bolt; that’s probably the most likely place for chafing back here. But with some careful bending of the wire this looked feasible: 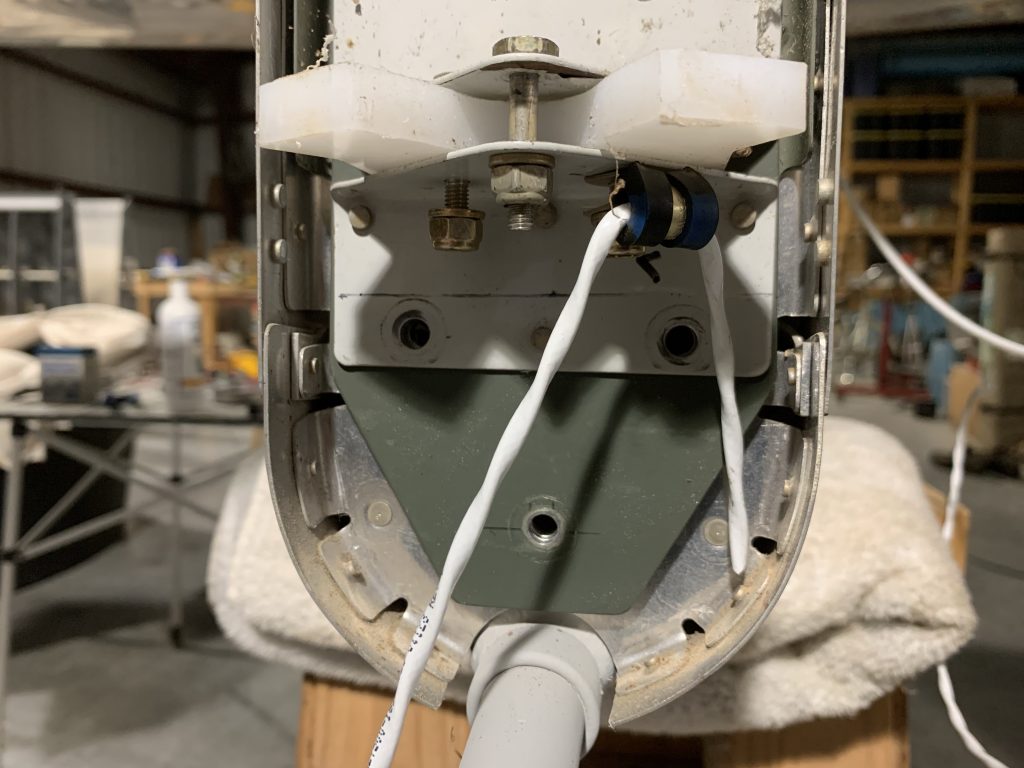 So that was my “go ahead and do this” point. There was a bit more consideration for locating the passthrough hole, since the tailspring socket is on the other side of the bulkhead, but I worked out a good location and got the hole drilled. Next was putting another passthrough hole in the next bulkhead forward – in this case I decided to locate the hole more along the aircraft centerline. My reasoning here was that the wire needed to go from above to below the lower longeron, and I wanted to not have the wire rubbing against that edge. So this routing would keep it further away, and I decided to also protect the wire in this area by feeding it through some silicon tubing I had on hand.

So now, aft of the F-810 bulkhead, the strobe wire separates from the pitch trim wire it’s run with, angles down and towards centerline, and passes through a small snap bushing in the bulkhead ahead of the control horn bay: 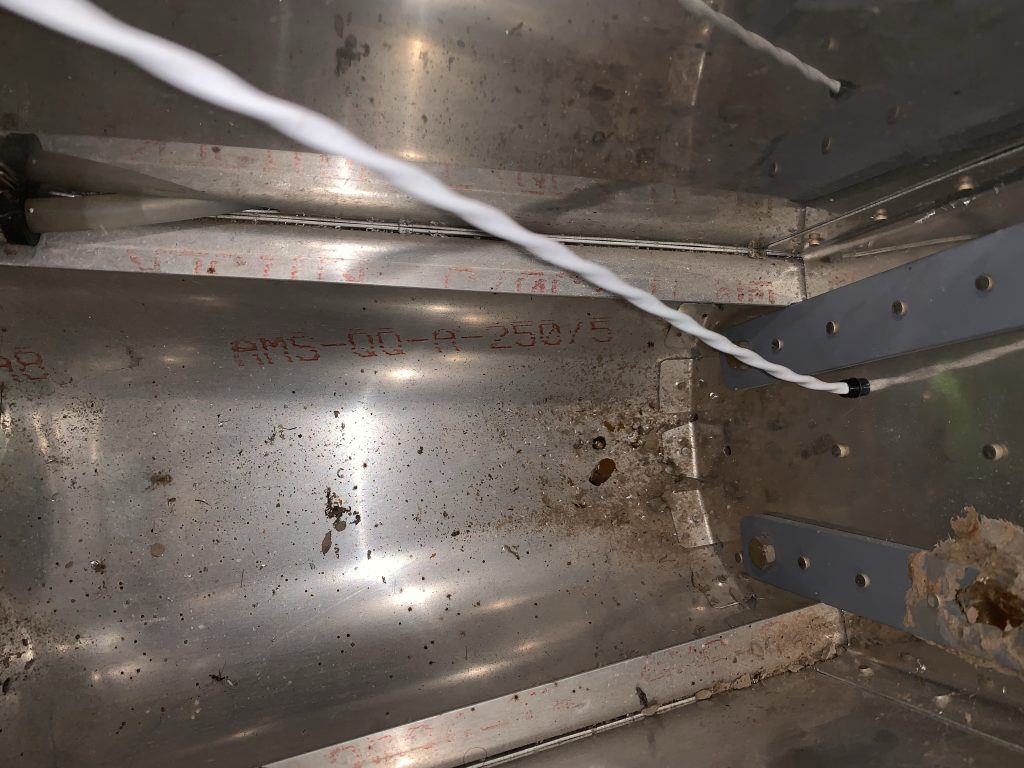 Then, in the next bay, it’s covered in the silicone tubing and moves further down and back outboard. As a side note, after getting the silicon tubing in place, which was a bit of a challenge (it’s a snug fit), this run actually doesn’t get anywhere near the longeron. Oh well: 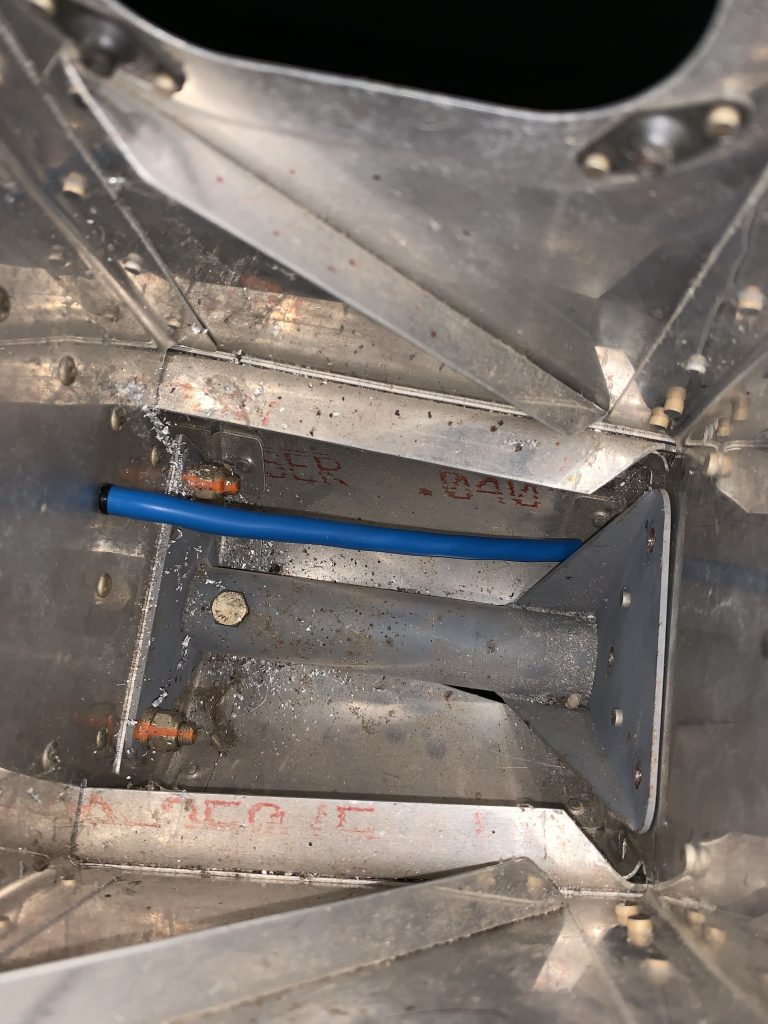 Finally, the wire exists the last bulkhead through another snap bushing, where it will eventually get routed as seen in the first photo. In the meantime, the tail feathers are back off again, because drilling that forward hole would have been impossible with them in place. Hence why the stab is missing again in this final photo: 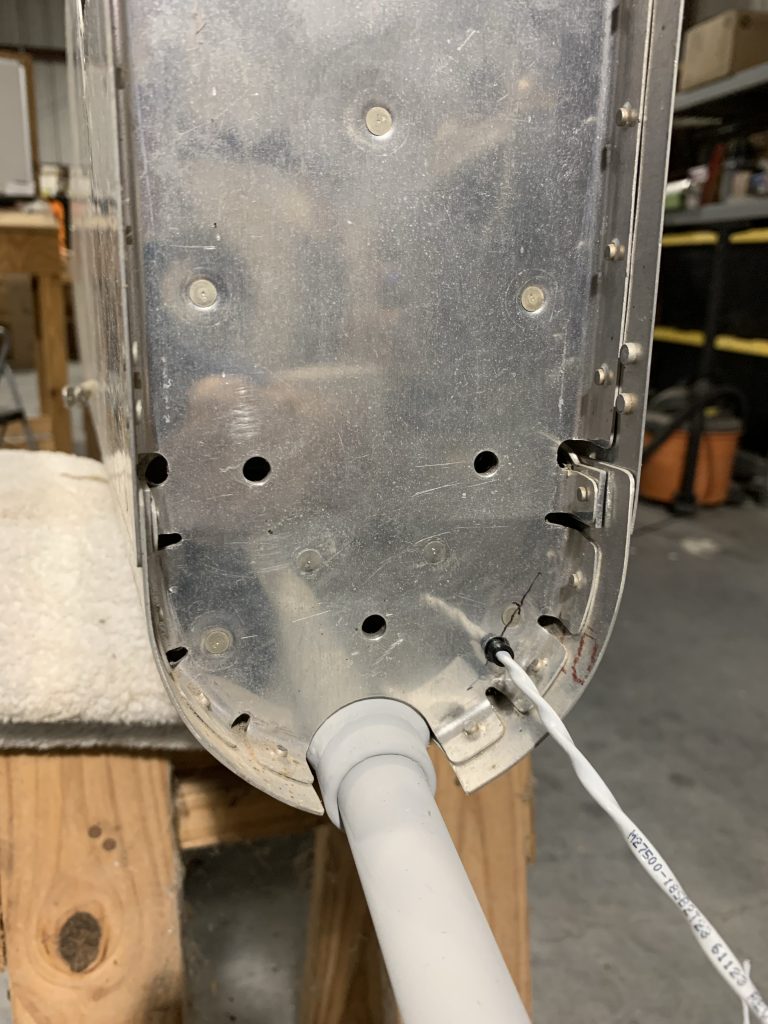 So this is getting me pretty close to having the tail cone ready to close out. The pitch trim wiring will just route out of the hole in the aft deck and over the horizontal stab spars, so nothing more really needs to be done on those right now. I did go ahead and secure the tail wire to the pads I put in place a while back, so that’s squared away now: 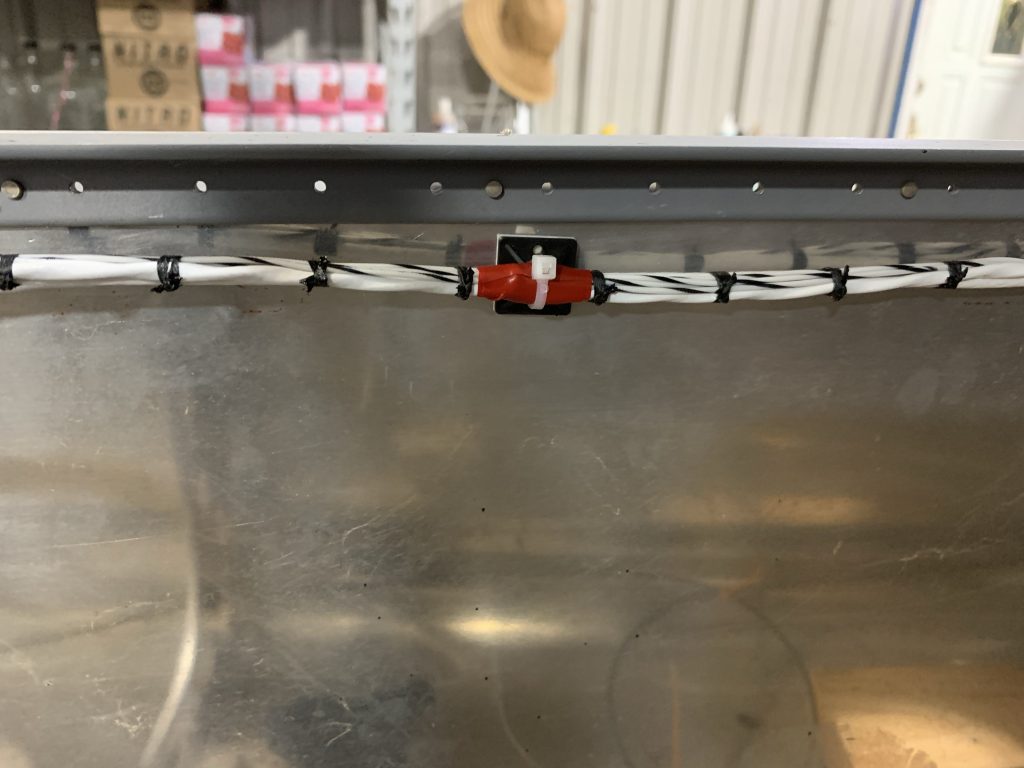 So I think really the only thing left to do is to route the pitot and AoA lines through the seat floor conduit and back to the area of the ADAHRS mount. Then I guess I’ll need to bring down the turtledeck skin for the last time and get it ready for riveting. I’ll still have to pull some stuff from the tail though, like the ADAHRS mount and the aft avionics shelf, but that’s all pretty straightforward. But I guess I’m not too far from the joy of some fun tight-quarters riveting.