Another solid productive day. My ground wire order came in, so I was finally able to get the wire run back to the flap motor done, which allowed me to close out a couple more branches. If it weren’t for that pesky shielded wire for the tail strobe (which won’t be here until Monday), I’d be able to close out the entire aft section of the harness. Oh well…

The overall strategy for the day was to work from the ends of the harness inward towards the panel. I’ve already been doing this from the tail direction, but today I started working in from the other end of the harness as well. That end is comparatively simple, just the fuel pump, left tank sender, and ground bus. The idea is to finish up all the runs that start outside the panel and go in, and then I’ll finish up with all the runs between panel items.

The strategizing did cost me some time today, though. One thing to consider was the connections from the displays to their backup batteries. The battery connectors are preinstalled on the harnesses that came with the displays; while I’m going to mostly rebuild the harnesses with my own wires, I figured I’d reuse the battery connectors. But were the included wires long enough? Well, I’d better go ahead and disassemble one of the display harnesses and find out.

Turns out they’re definitely too short. So I started thinking about just making my own battery connectors; they just looked like regular old micro molex plugs to me. I went to the install manual to see if they specified the connector, and sure enough, it was a molex. But I also noted an important commandment regarding the battery connections – the runs were not to exceed 24” in length. If I ran these through the service loop from the center panel to the avionics shelf, I’d be far in excess of that.

So, new decision for the day: the battery connections will be separate from the main harness. There will still be enough slack in them for me to remove the center panel and have a decent service loop, but it’ll annoy me a little bit.

There were a few other considerations as well. I discovered that I never added the Aithre Shield CO monitor to the EMS schematic. Easy enough to do, though. Then there was the question of getting the audio output from the CPI2 ignition controller to the intercom, so I can have audible alerts if there’s an ignition fault. The CPI came with a short audio patch cable, but 1) it’s too short to go from the CPU to the intercom and 2) it has plugs on both ends. I need bare wires on the intercom end. I ended up ordering a cable with only one termination from Amazon for this purpose.

So yeah, lots of research and thinking, but I still got plenty of actual wiring done. At this point I’ve basically closed out everything outside the panel/avionics shelf area; I did the rear stick branch, both fuel level senders, the switch group on the left side of the panel, and the main switch console on the right side of the cabin. The only things outside the panel that aren’t closed out (besides that pesky tail light) are the power and ground buses, as well as the branch going to the engine compartment.

The plan of attack for tomorrow will be to first route the power and ground connections for everything in the panel, then close out the EMS harness, and finally start doing all of the inter-panel connections. We’ll see how far I can get with that. I suppose I’ll also want to go through the entire constructed harness and verify that I didn’t miss anything important…that’ll be a chore in itself right there.

For now, I’ll throw in some more photos. Here’s the overall state of things; it looks pretty chaotic, but it’s kind of hard not to with all the spring clamps and stuff lying around: 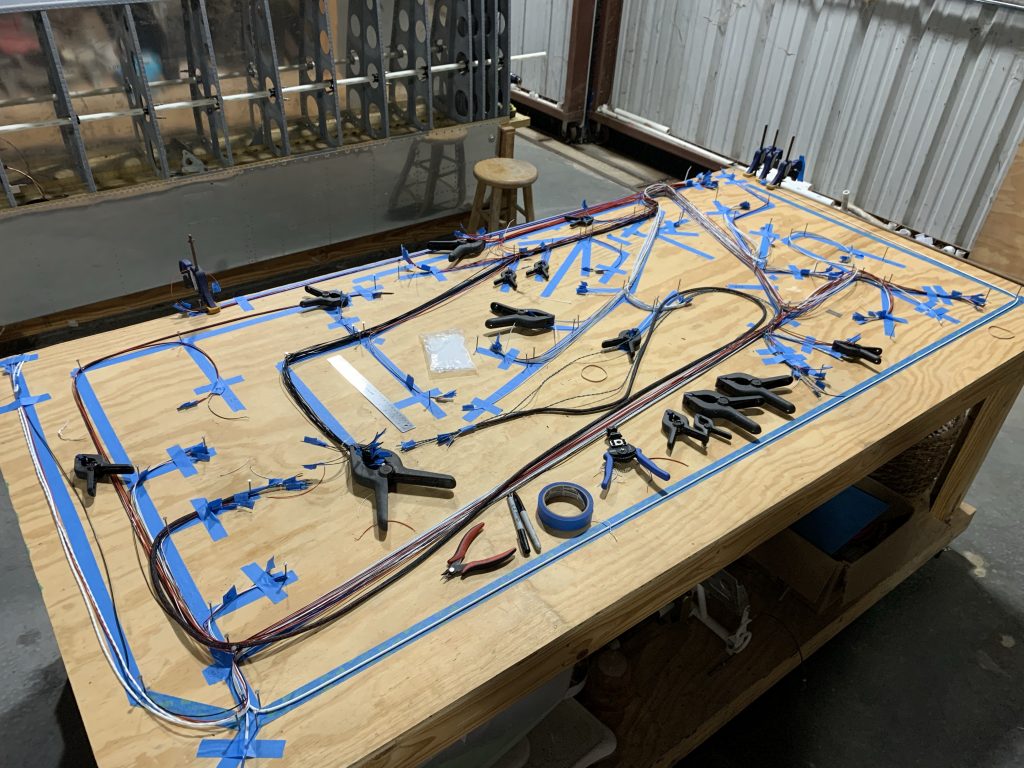 And for fun, here’s a close up of the busiest part of the harness. This is the area just to the right of the panel/avionics shelf, so in a sense everything passes through here. It’s the wiring equivalent of an interchange between two super busy highways, except here it’s more like three highways and two smaller roads. This is going to be one fat bundle of wire when it’s all laced up: 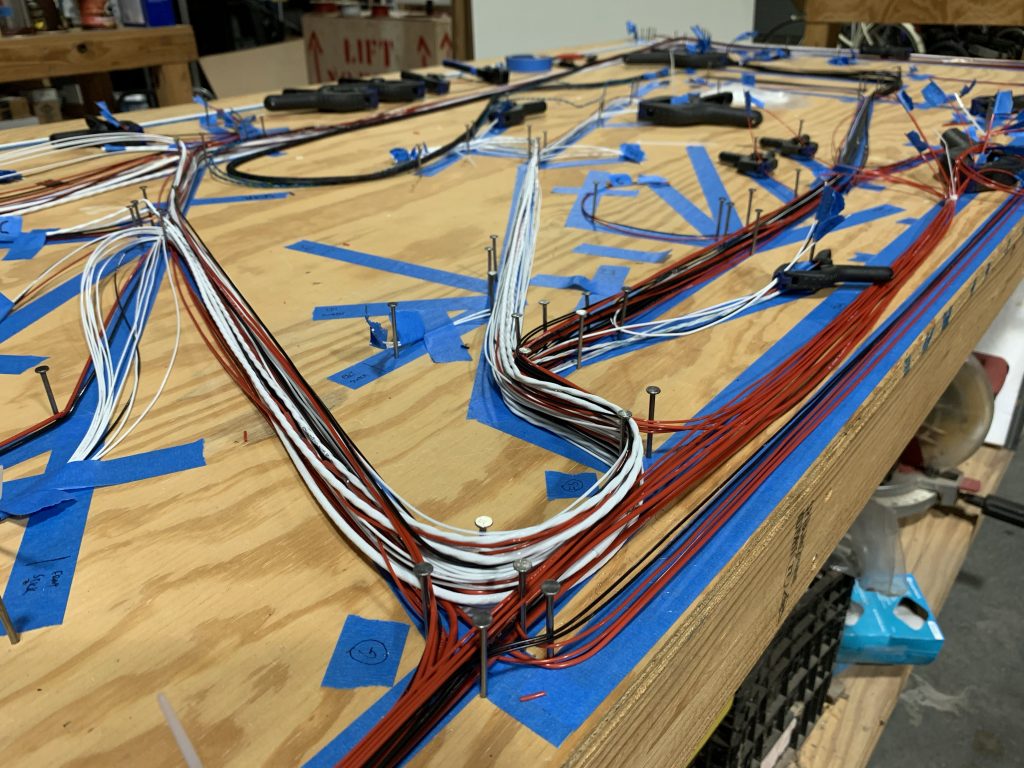