Yep, more work on the fuse shelf. Today I drilled the mount holes and installed the nutplates for the e-bus diode. I considered also going ahead with the holes and nutplates for the assorted adel clamps that will secure the wires here, but I think I want to wait until I have the wire bundles mostly in place before I do that, just to be sure I’m locating everything well. No real reason to commit just now other than the general desire to make holes in things.

Instead I decided to go ahead and make the short jumper wires to connect the diode to the two fuse blocks. Hey look, things are, like, connected! 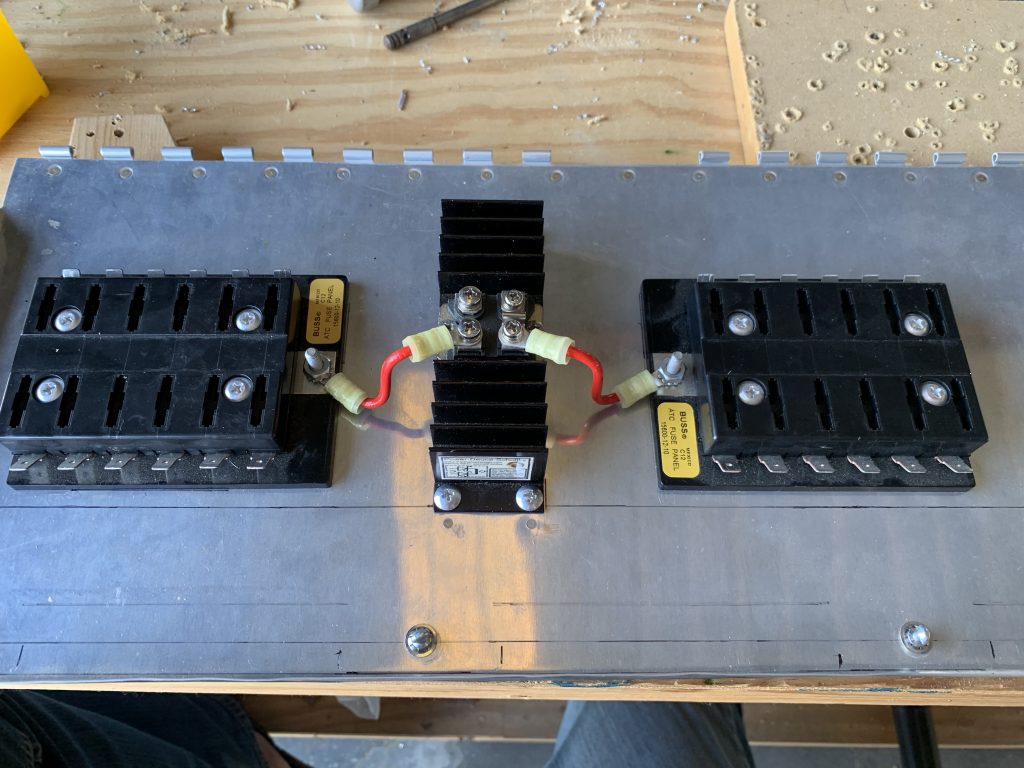 After that, I set about working on the quarter-turn fasteners used to secure this shelf. As originally installed, these are just a bit too long for the application – they’ll grab the receptacles OK, but I didn’t like how easy they were to disengage – seemed like they might be prone to coming loose with vibration. My original fix for this was to just slip some small o-rings onto the fasteners, and that did indeed snug them up nicely – but the o-rings also got squished out and fell off the fasteners in short order. Obviously not a satisfactory solution.

So when I placed my last order with McMaster, I got some new retaining rings for the fasteners (these are one-time use items, no good way to remove them without ruining them). For spacers, I just used some thin AN4 washers. Actually, I originally tried regular AN4 washers but they were too thick. Fortunately I was smart enough to only do this to one fastener before testing. This still took a few iterations of test-fitting the shelf in the fuselage, though.

Then I decided it was high time to get the fuselage prepped for finishing the bottom skin riveting that’s been put off forever. So I set about removing all the stuff I’ve been working on these past weeks – the upper shelf with its stuff, the panel and supporting structure, and all the baggage bulkheads/floors/panels and attached components. Oh, and the control column came back out too. Don’t want that flopping around when I roll the fuselage upside down again, after all.

Finally, I revisited the aft mount points for my two under-floor conduit runs. Some time ago, I secured these runs using zip-tie mounts attached to the lower skin with 3M VHB tape. Most of these stayed put, but I guess I had a little too much tension on the aft mounts – probably I was trying to stretch the conduit a bit to try to straighten it and make running stuff easier. In any case, both the zip-tie mounts unstuck from the tape squares. So I removed the old tape (which definitely had plenty of adhesion to the aluminum), cleaned the area, and re-stuck two mounts. This time, though, I didn’t immediately secure the conduit to the mounts – I’ll let those set up for a day or two first, and this time I don’t think I’ll try so hard to pull the conduit tight.

And that was a good half-day’s work. I need to go dig out the manual pages for the riveting so I can refamiliarize myself with what needs to be done. I also need to get some dimpling done on the antenna mount locations, where the doublers will attach. That’s going to be a fun job – I think the only real way I can do those is with the little pop-rivet dimple dies, and those aren’t the most fun thing in the world to use. Got to be done, though…