The first and most interesting question of the evening involved laying out the mount holes to match the ADAHRS units. Normally, I’d use the actual unit as a drill guide for something like this, but that wasn’t going to work for this – because the holes through the mounts need to be undersized, since they’ll get tapped for the 10-32 attach screw. Laying tham out manually seemed fraught with peril, especially since the hole spacings are 4.2” – not exactly a nice even division.

Eventually, though, I realized I could use the unit itself for this. I’d already drawn a line along the length of both angle pieces, marking where I wanted the mount holes to lie; I just needed a way to draw an intersecting line to mark the hole centers. So I clamped an ADAHRS in place on the angle, butted against the mark at the lateral center (ie where it would butt against the other unit), and then traced the inside of the mount holes. The outboard intersections between those circles and the previous mark would be my hole centers, and I could know they were the right distance apart since I used the unit as a guide.

So with those marks, I got the four holes drilled in one angle, then clamped both angles together and drilled through both of them to make the matching holes in the other angle. For the moment, I only drilled them to #30 – the final hole size before tapping will be #21, but I want to drill that final hole in assembly with the bar stock pads I’ll be adding to provide adequate thickness for the tapped threads.

As for those pads – last night I’d figured on just cutting 3/4” strips, making them the length of both ADAHRS units together, and riveting them to the angles. I decided instead to just use short pieces as needed; here again I can save a bit of weight and material. So there end up being three mount pads per angle piece: the two outboard ones cover the single outboard holes, while the center ones cover both inboard holes for the units. Each pad will be attached with a pair of flush rivets.

Anyway, there was just a decent bit of measuring and cutting and deburring and laying out holes and so forth. Also a brief break after my bandsaw blade decided to break – good thing I have a spare, or I would have been rather annoyed. I got to the point of having all the rivet holes drill between the pieces, and called it a night: 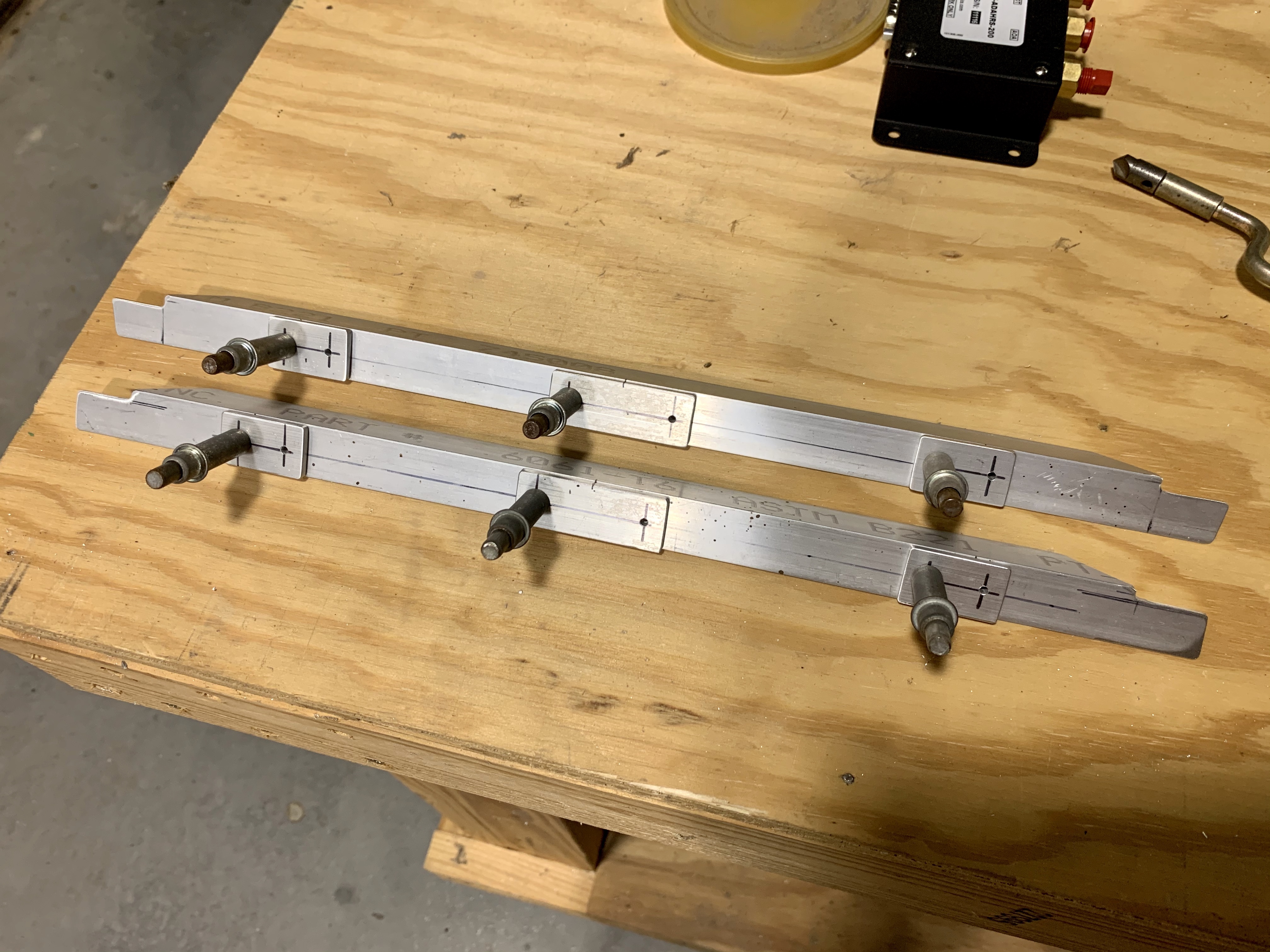 So tomorrow I’ll just need to mark the pieces so I can keep track of which goes where, get the rivet holes deburred and countersunk, then shoot primer on all this stuff before getting the riveting done. I’m going to wait until everything’s riveted together before I final-drill and tap the actual screw holes – I really want to make sure those are lined up properly.

I guess I need to think of my next mini-project – which I think will be putting together the switch console. That should provide a good solid couple days’ work…