So yeah, made good progress on the shelf tonight. First order of business was working on the other half of the piano hinge, which attaches to the lower baggage bulkhead. I already had my layout lines there from a previous session, so this went pretty quickly. About the only real challenge was that since the hinge half is pretty much in the middle of the bulkhead, there was no good way to clamp it in place for the first few holes. I just resorted to holding it by hand while drilling the first three holes, then with it checked it was in a good spot to drill the rest of the holes. Then I just did all the demurring and prep and riveted it on. Nothing to it.

Next up was dealing with the attach point for the aft end of the shelf. I’ve planned all along to handle this by attaching aluminum angle to the aft upper brace, and the projecting lip of the angle is where the quarter-turn fasteners will live. I did change that plan up a bit, though – originally I was going to have the free side of the angle pointing forward, but I decided to reverse it instead. The reason for this was to provide more room on the shelf – with the angle forward, I’d have about 3/4” of the shelf where I couldn’t really run anything. Turning it the other way gets me that space back.

I’d also originally planned to use a single piece of aluminum, but I decided to do the extra work necessary to just have four small pieces in my fastener locations. Might as well save a little weight here and there.

Laying out the angle was a bit more fun than the hinge half, especially since I was working inside the fuselage and not on the workbench. Plus, messing up the brace would be annoying, so better to be careful here. Here’s a look at the brace with the four angle pieces clecoed in place: 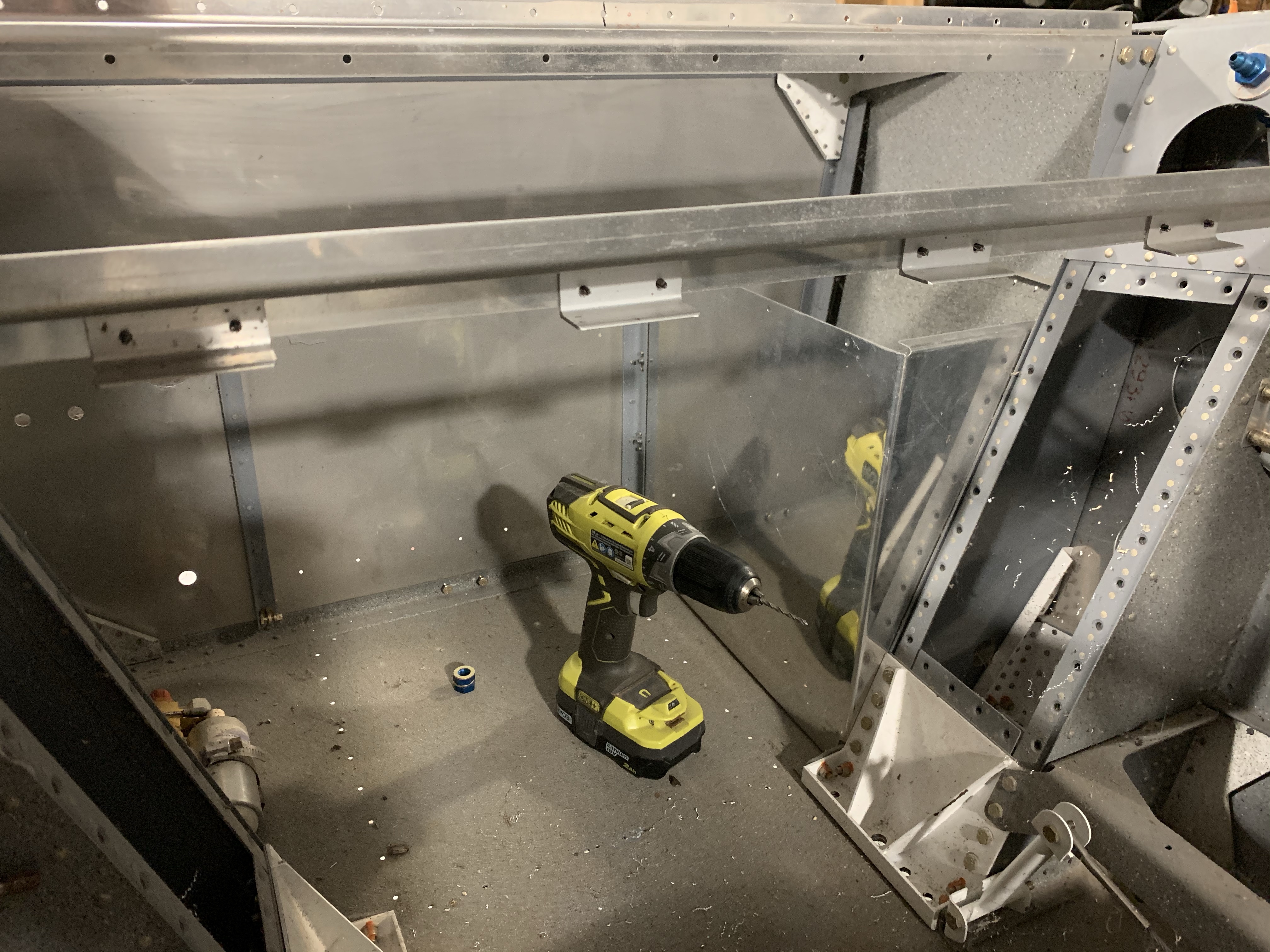 Next up, it was time to reinstall all the baggage compartment pieces. In order to really make that bulkhead stable, the baggage floor has to be in place too. So a bit of busy work there, but once that was done, it was the moment of truth: trying to install the shelf. I probably didn’t need to worry, it fit just fine.

Here’s the shelf clamped into its stowed position (also giving me my opportunity to mark where the shelf edge should go, using the angles as a guide): 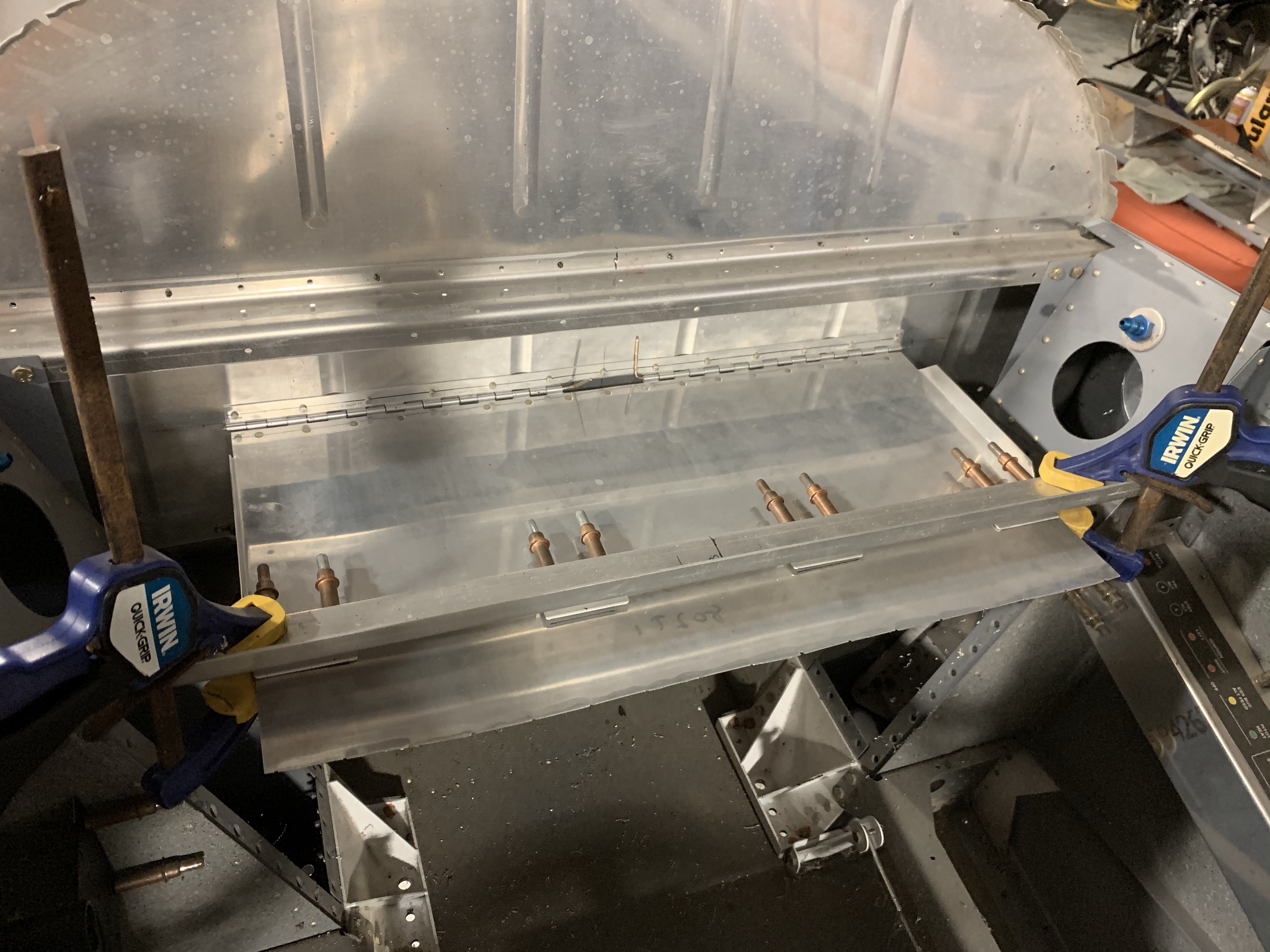 And then in the lowered position, as I’d see it if I needed to swap out a fuse or service anything else here: 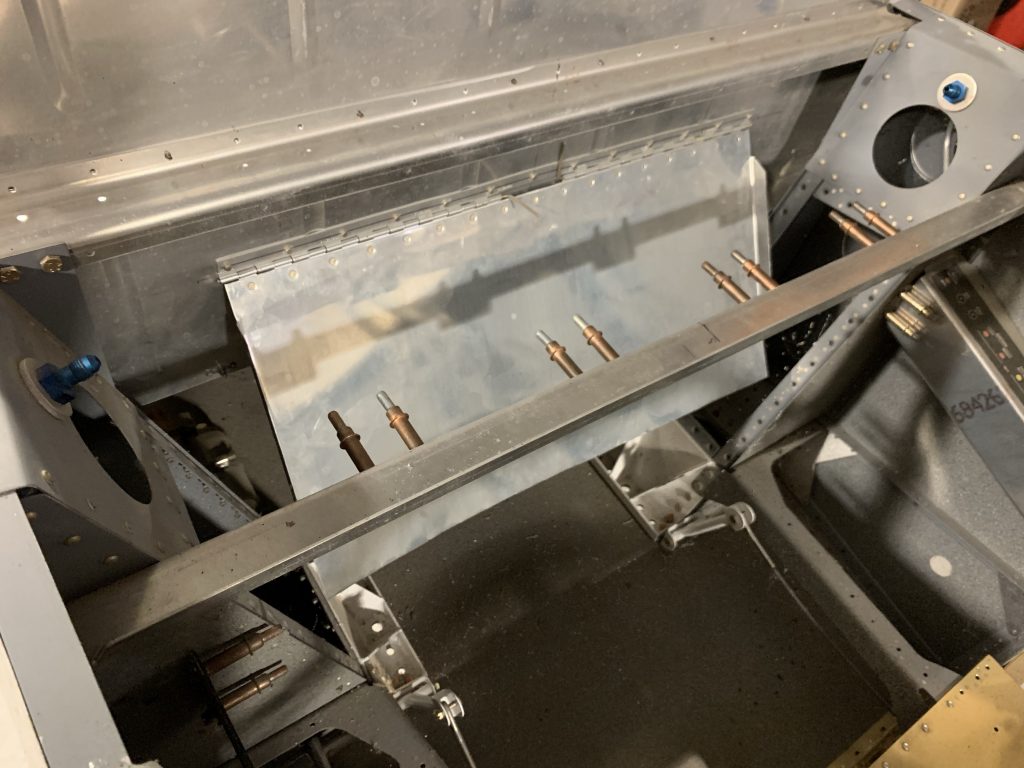 So we’re getting there. The big remaining thing is going to be fitting the actual quarter-turn fasteners. These things came with no instructions or drill templates or anything like that, so while they’re not exactly complicated, I’ve still got to get this hashed out. Maybe I should check the McMaster website and they’ll have some dimensional drawings I can us for drilling.

I’ve also got to get those angle pieces primed before I install the fastener bases and rivet everything in place. I’m leaning towards just using MSP blind rivets here; bucking under that brace might be interesting, especially with the bases installed. But the way I figure it, this should be wrapped up tomorrow.