Just a bunch of bulkhead work today. I’m kind of wishing I’d gotten a head start on this one of the previous two nights, but oh well. Originally I was thinking I’d be able to get these all riveted in place in the next work session, but I forgot one crucial step: the forward most bulkhead needs to be primed and painted before it can go in, since it will be visible in the interior. And before that can happen, some subassembly needs to be done.

I started off today picking up with deburring all the stuff I’d match-drilled previously, then moved on to the various dimpling and countersinking operations. Basically, I prepped every part except for the actual skin, which I’ll handle when it’s time for it to go on the airplane. There’s plenty of holes to mess with here, so this did take some time.

Next up was some assembly. The harness fairleads and canopy rail receptacle got riveted in place. The former was straightforward, as was the latter…kind of. An issue here are the three lower rivet holes, whose shop heads sit inside an acute angle. There’d definitely be no squeezing those with the tight clearance, and even bucking them with my skinny tungsten bar would have been a challenge. So I decided to use blind rivets on these instead. But then I was bothered by the idea of having some the rivets here be solid and the others blind (since the heads will be visible), and so I ended up just using blind rivets for all nine holes. Oh, and I had to drill out and replace two of them, because they didn’t quite go in perfectly flush.

It was late in the day by this point (I spent the middle of the day going out for pre-hurricane supplies), so priming today was out of the question. But hey, while I couldn’t rivet that one bulkhead, the other three could go. So I took those over to the fuselage and got them riveted. I was a little concerned about this, since some of the rivets joining the upper and lower bulkheads sit kind of tight against the skin and/or longerons, but I got them all squeezed with no trouble. Oddly enough, the most problematic ones were on the aft most bulkhead, which rivets to the aft deck. The two outboard riveted there are super close to the longerons, and I tried about three different ways before I ended up shooting them with a long straight set. 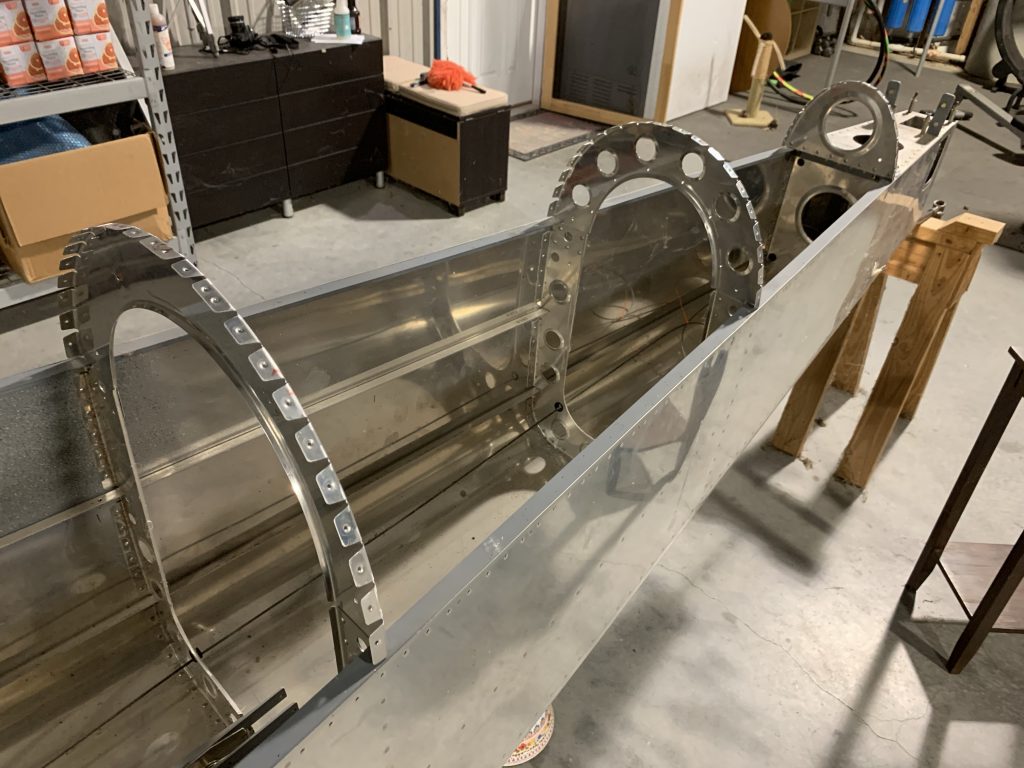 Hopefully tomorrow the rain holds off and I can get the last bulkhead primed and painted. It’ll still be a bit before I can rivet it after that – I’ve found previous that this granite-texture paint can take some time to really harden, so I’ll want to let that part sit for probably a week before I abuse it by doing some riveting. Kind of thinking I might go ahead and install the static ports and the first part of the plumbing while I’m in a bulkhead-ey mood. Maybe finally get back to the wing wiring stuff too, now that I have my conduit.