No build activity yesterday, thank to some other stuff going on, but today I got a few hours. My idea of gluing the spacer washers inside the elevator bell crank worked out nicely, and I started off today by reinstalling the bellcrank and pushrods. With everything aft of the control column torqued down, the play in the system was all but gone, so the first step was to clamp the elevators in-trail and then adjust the large aft pushrod until the control sticks were vertical. I measured this by just sticking the magnetic smart level to the stick. It only took a couple turns of the forward rod end to get things nailed down. 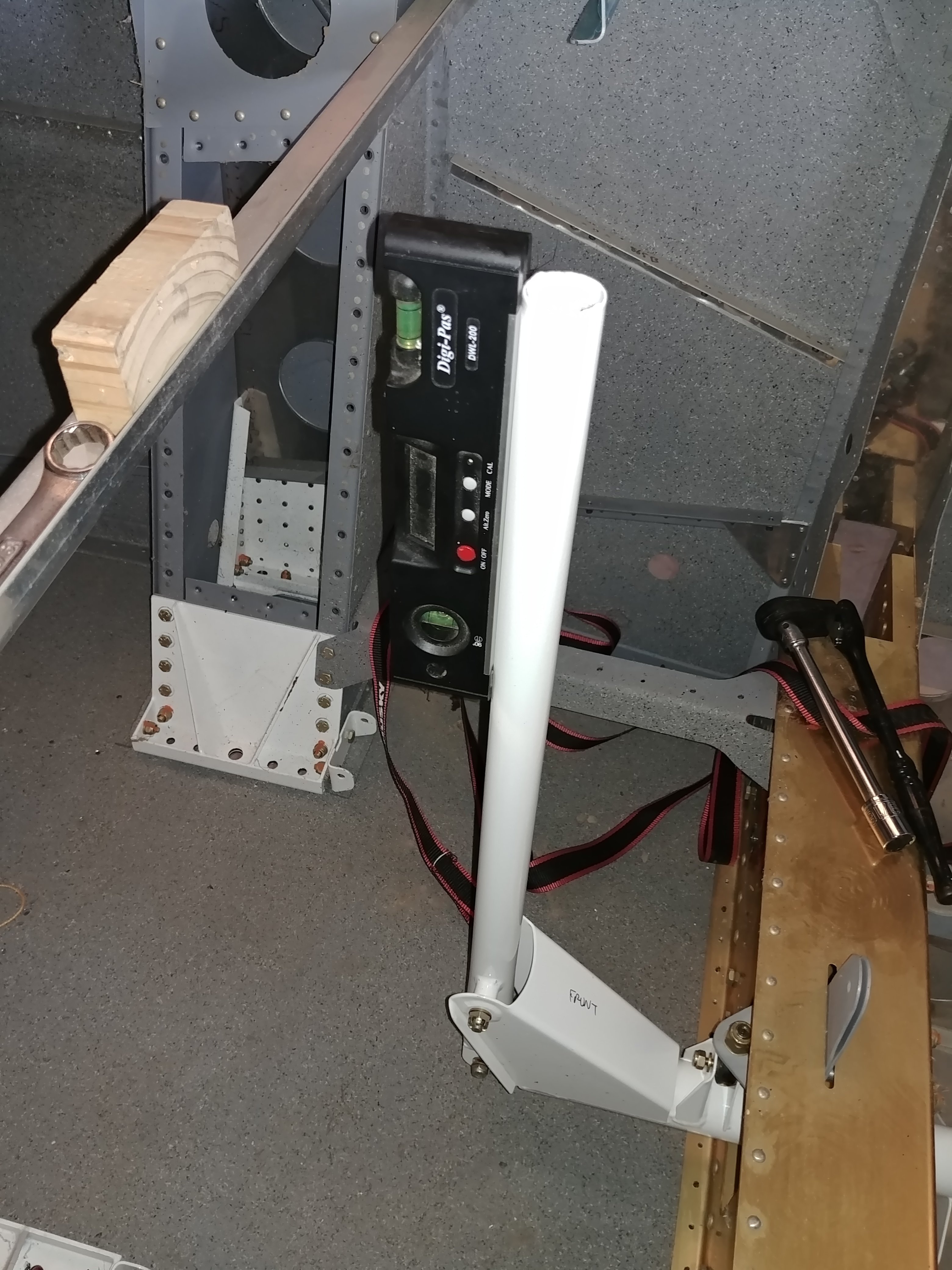 The rear stop is pretty easy to get to – it’s a piece of angle that also bolts to the vertical stab. The forward one is a different matter – it’s a piece of flat stock that sits between the aft deck and a piece of angle on top of one of the bulkheads. Also there’s hardly any clearance in front of the horns to get to it. Basically, tweaking this piece was going to involve removing it, removing material, then reinstalling it…over and over and over. But I couldn’t even get a straight look at the thing with the vertical stab in place – so I ended up deciding to remove it. It’s beyond me why they have you install the vertical stab prior to trimming these things, there’s absolutely no need for it to be in place at this point.

Anyway, the elevator down travel (controlled by the forward stop) was already sitting within the allowable range (20-25°), so I figured I could probably get away with just removing the material necessary to get both horns to come into contact at the same time – remember that they’re not perfectly in line, the right on sits slightly aft of the left. I used drill bits as discount feeler gauges to figure about how much material needed to be removing, then got the stop out and went to work. It only needed about 1/16” off the one side to even things out: 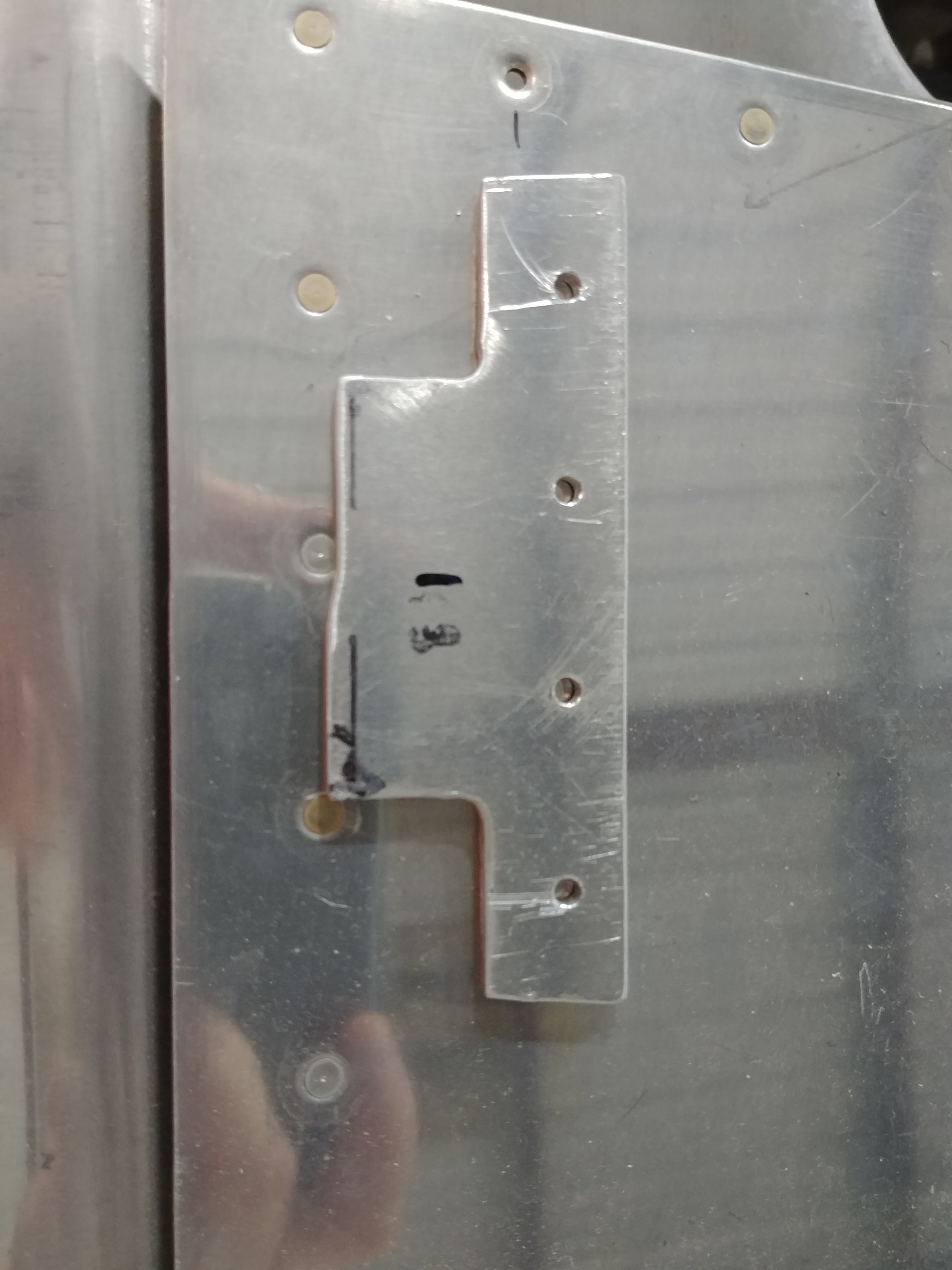 And I only ended up needing to remove/reinstall it a couple times before everything contacted at once. Here’s a poor attempt to show this piece place. The horns  and center bearing are visible in the foreground, and to the left the stop piece can be seen peeking out from under the aft deck: 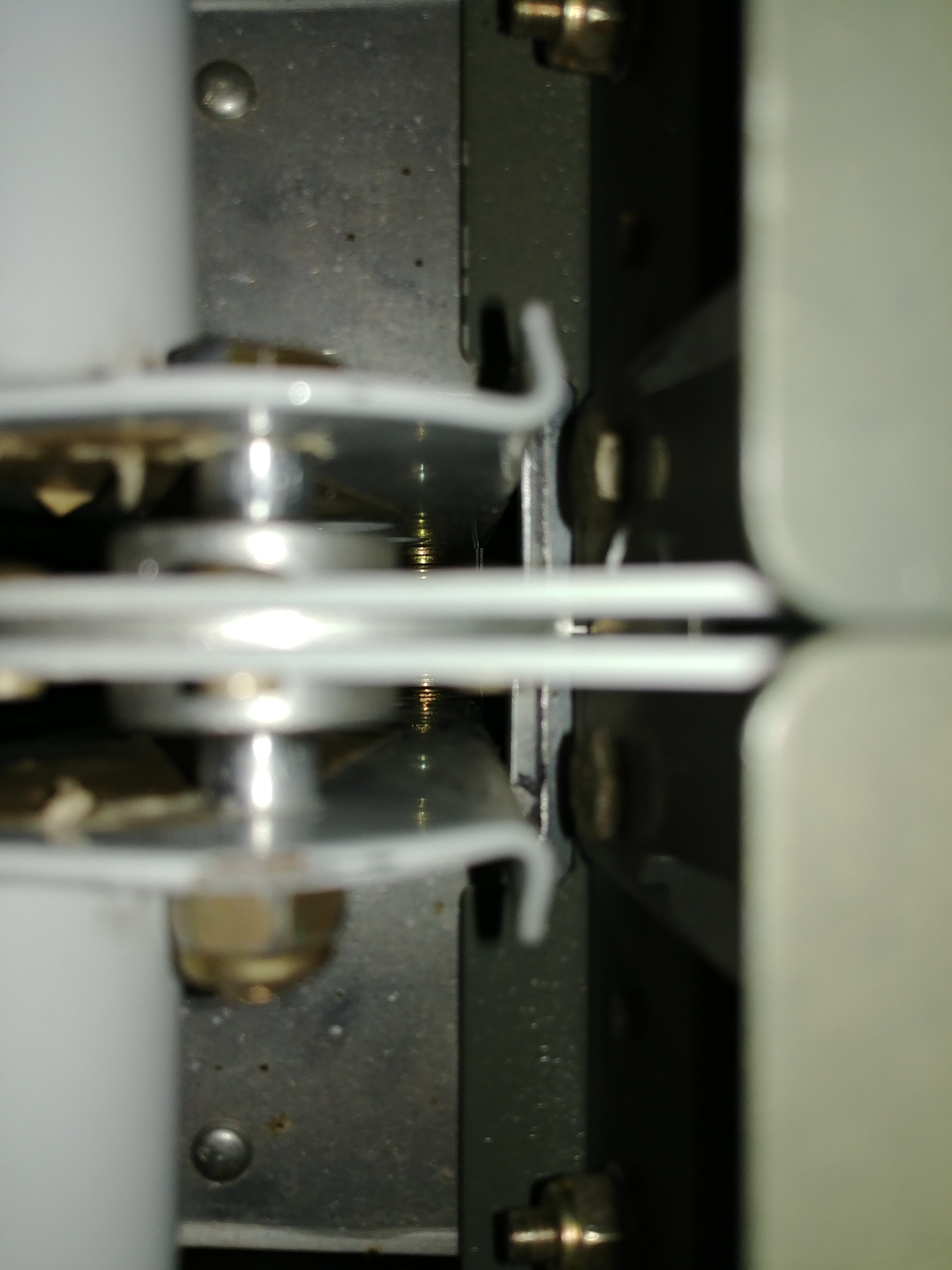 The rear stop was much more straightforward. As before, I figured out the rough amount of material to remove to account for misalignment of the horns, and did that work off the airplane with a cutting bit in the Dremel. The rest of the tweaking I did with the stop in place, filing away at each half of the stop. At first I made no effort to make things smooth, I just wanted to be removing material where the horns made contact: 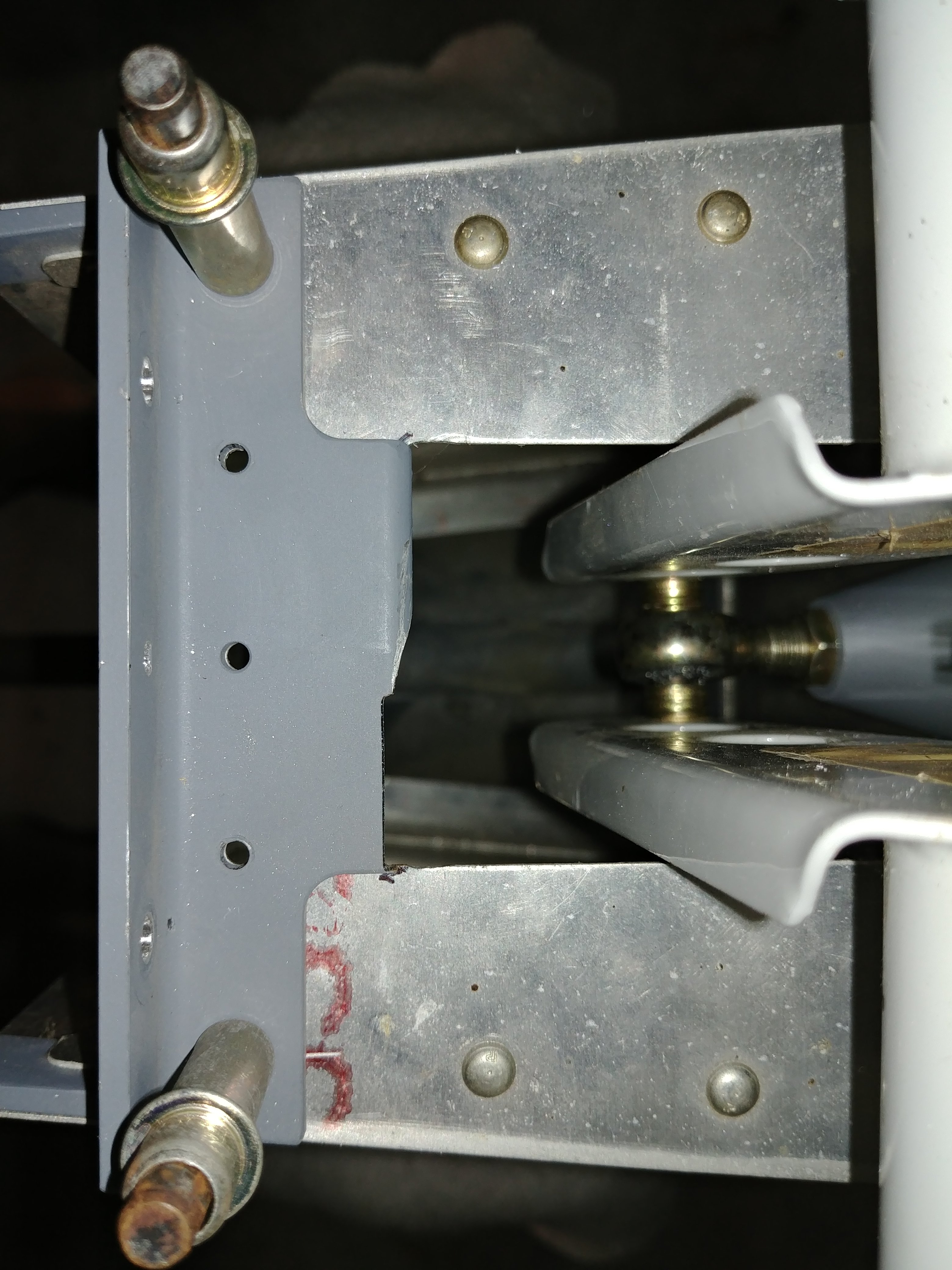 Once the travel was correct and the horns were both making contact at the same time, it was time to remove the stop, make the transition between halves nice and smooth, and clean up all the rough edges: 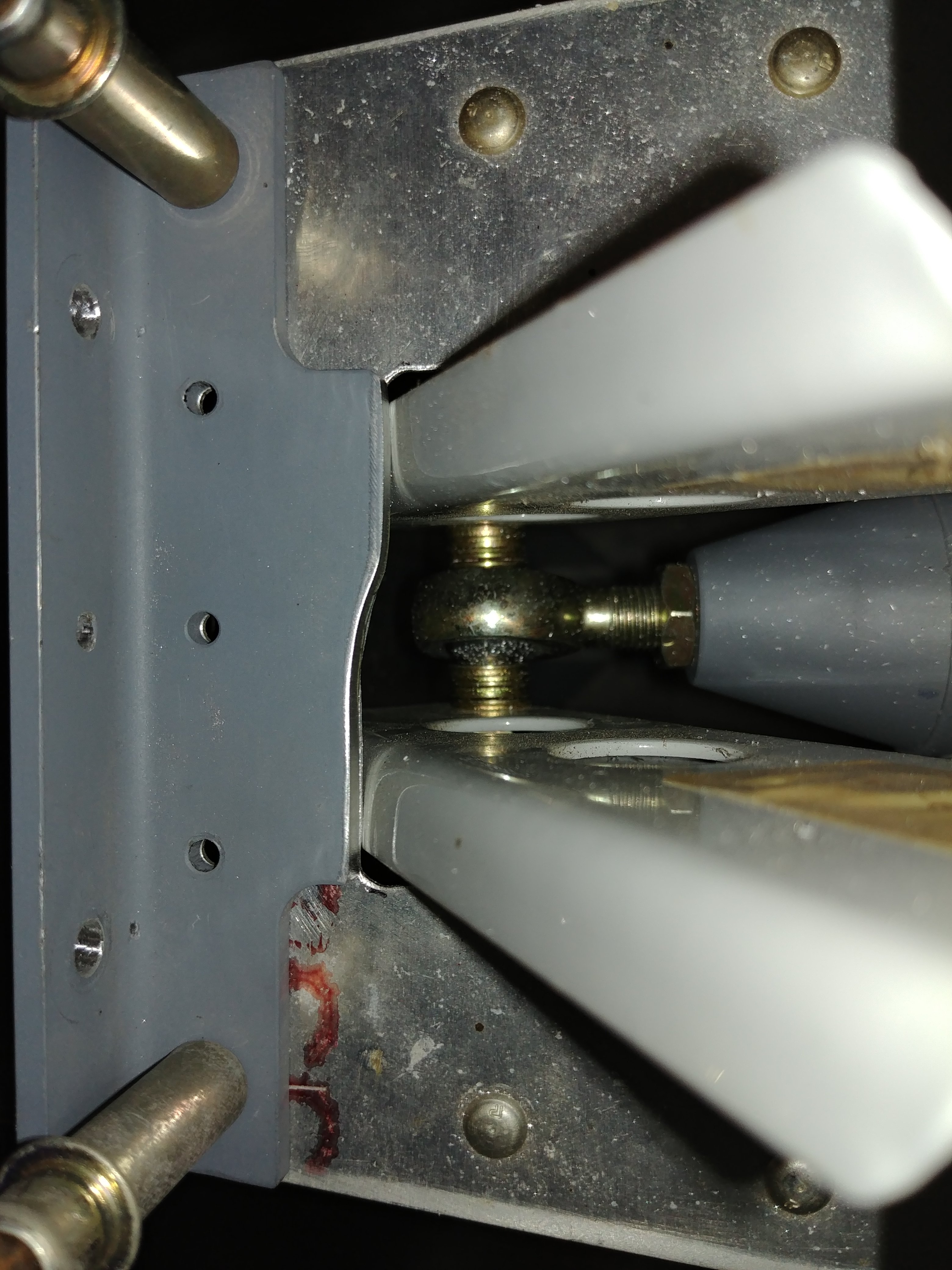 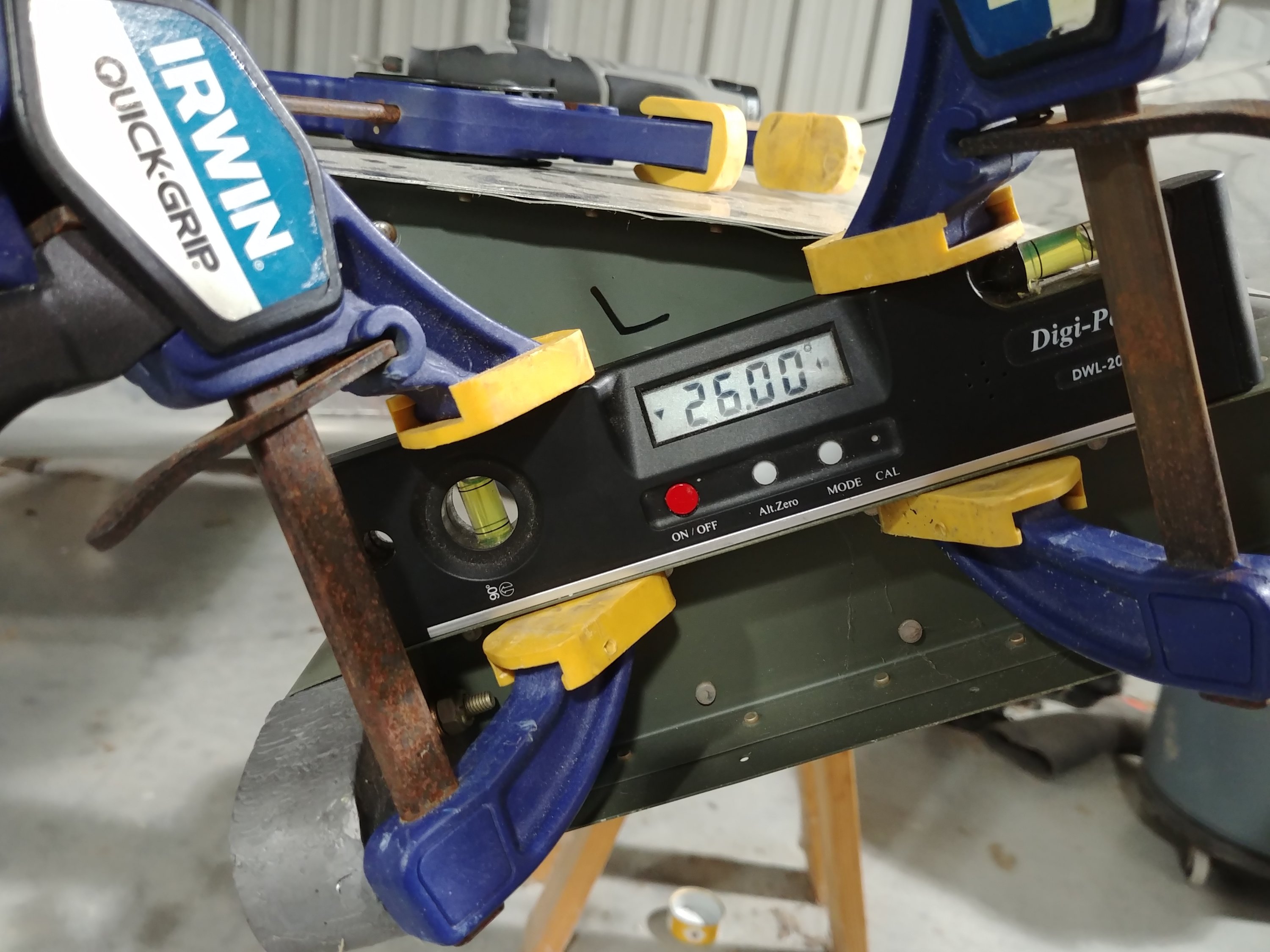 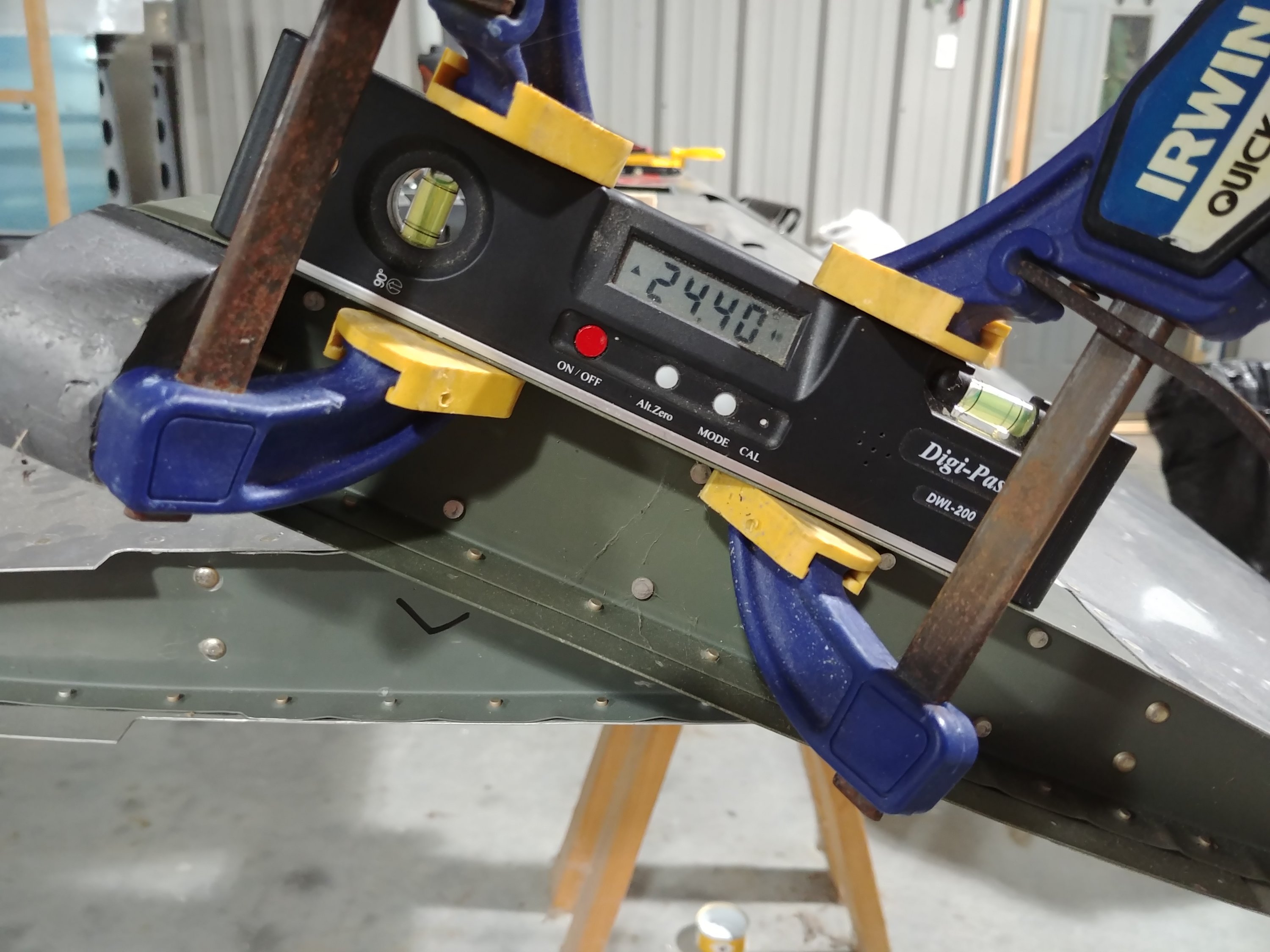 Then I reattached the vertical stab, mainly because it’s about the easiest way to have it stored in a safe place. Next step by the book is to do the rudder control stops, but I think I’m going to diverge from the plans here. The factory rudder stops are small angle pieces mounted outside the tail, which contact the rudder horn at the extremes of its travel. But there’s an aftermarket solution as well – a piece of delrin that attaches to a rudder hinge bracket, and limits the travel by contacting the spar. This will make the tail a little bit cleaner, and should also be less trouble to adjust. Problem is, I don’t have that part on hand yet, so I suppose I’ll order that tomorrow. In the meantime, I can move on to installing the flap motor.