Priming (and a few rivets

My main goal for today was to get the gear legs primed; as I mentioned last night, this would hopefully prevent me from getting hung up this week or next weekend when I was ready to work on the gear. Though at the rate riveting is progressing, who knows…

My first challenge was figuring out how to set up the legs for priming. Lying them on flat plywood seemed subpar, but hanging them was equally interesting since they’re kind of heavy. I ended up with a sort of ghetto solution – I found a piece of scrap lumber that fit between slats in the big gate to the backyard, then supported the other end with my step ladder. Two eye hooks in the wood held up 50# monofilament loops, which could simply be passed through a hole in the gear leg and hung from the hook. 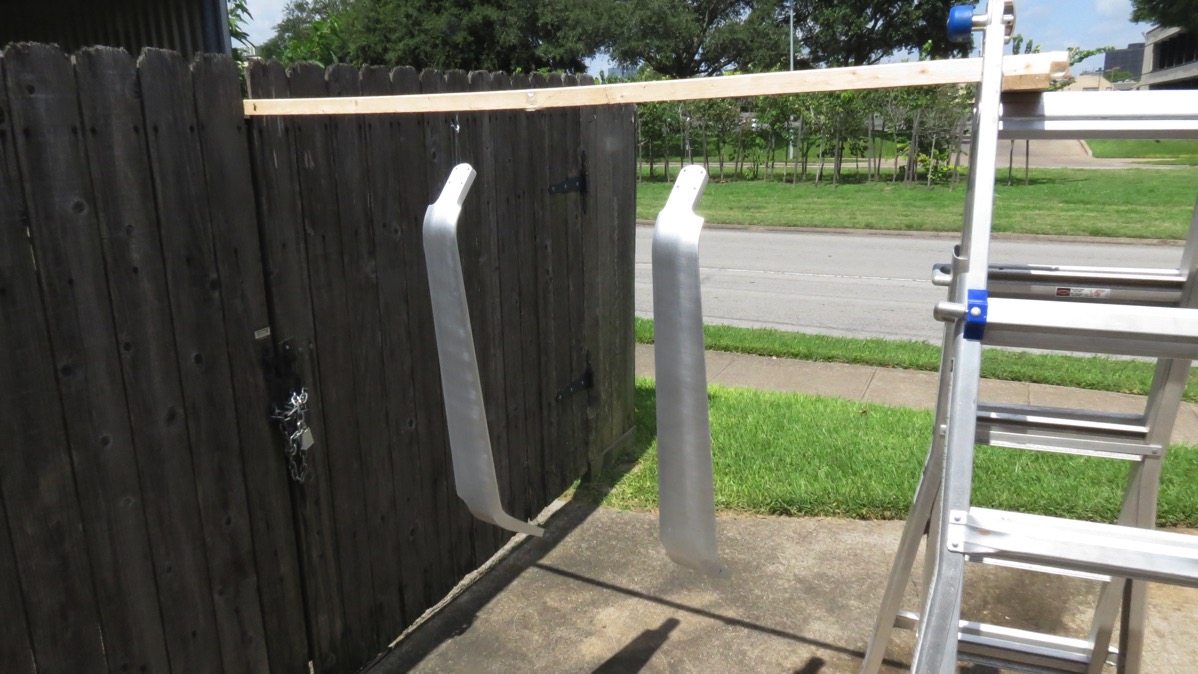 Prepping the epoxy primer was more fun. The stuff I’m using is rattle-can 2K epoxy primer from Eastwood. Basically, you push a pin on the bottom of the can, the two parts are allowed to mix, you shake the can for about 3 days or so to ensure proper mixing, and you have epoxy primer without a lot of cleanup. The can also implies this stuff is kind of toxic, so I made sure my respirator was on nice and tight before I started shooting. I shot with the bottoms of the legs up first, let everything dry for about an hour, then flipped the legs so I could shoot the tops up at eye level.

The legs with nice gray primer: 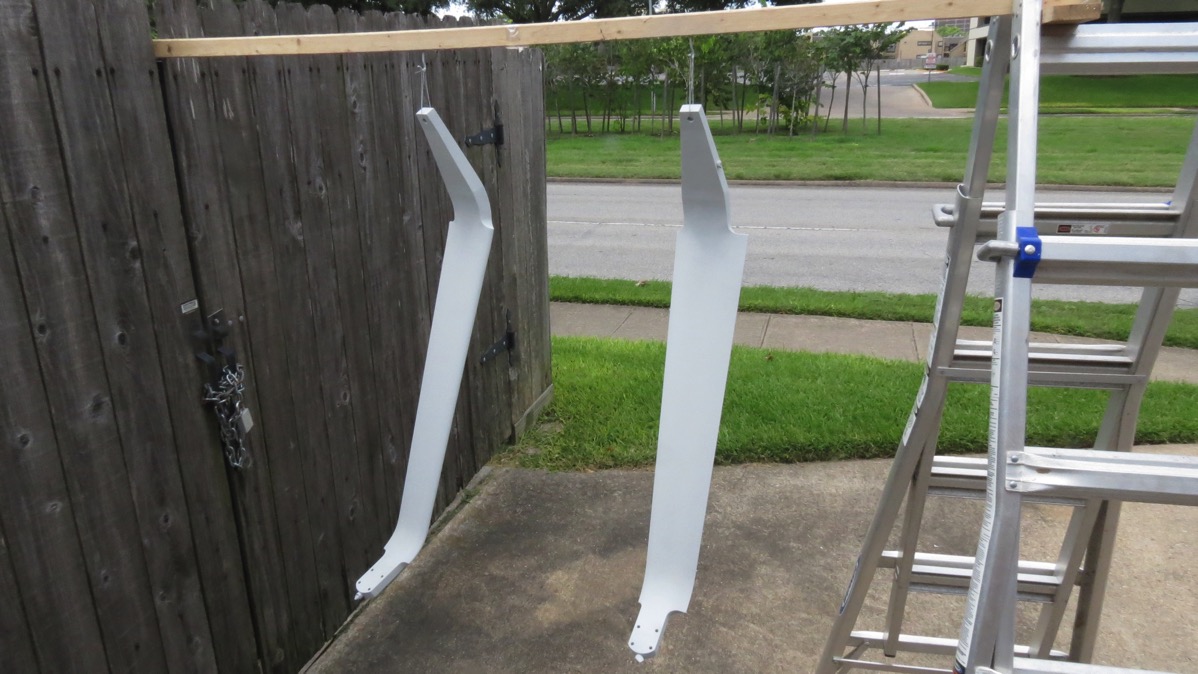 The primer went on pretty nicely, though the finish is surprising rough. I don’t particularly care in this case since this is just for protection, not looks, but if I was shooting topcoat on this stuff, I’d definitely feel the need to sand it smooth first. In my case, I imagine the exposed portions of the legs will get stripped back to bare metal when the plane gets painted anyway.

While I was in the priming mood, I also got the cockpit rails out and primed them: 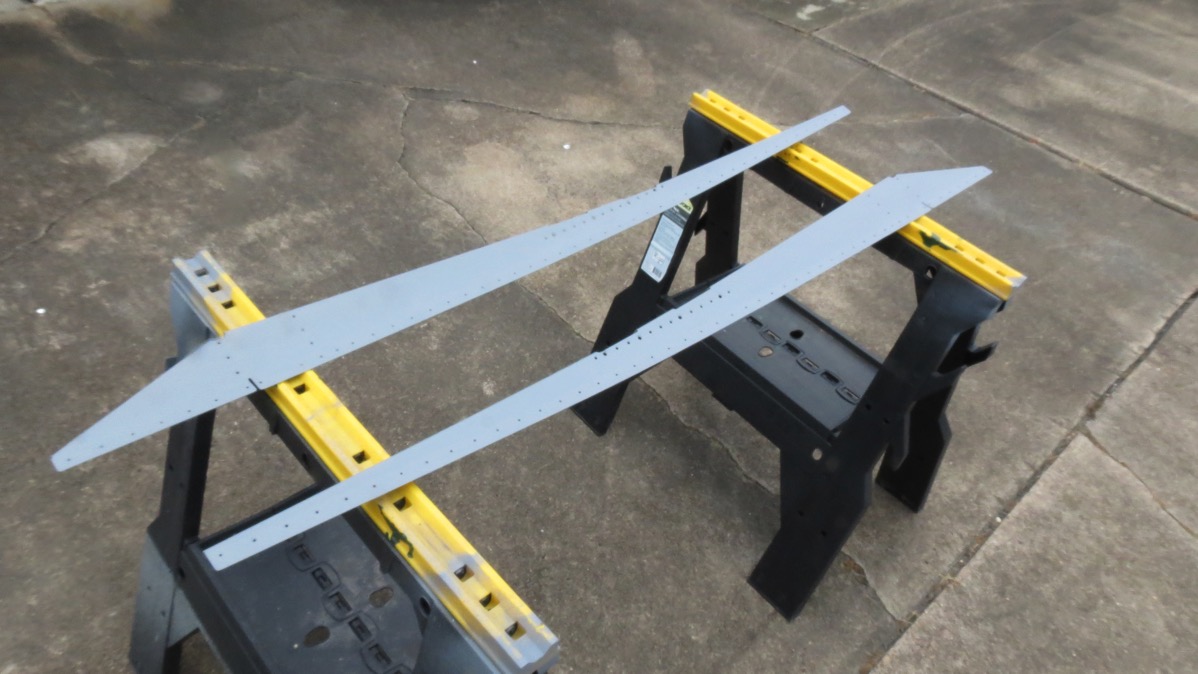 Once all the rivets get shot on the bottom of the fuse, these will get riveted back on the top side. My intent is to topcoat them with the same interior paint, but I’m not going to do that until they’re riveted in place, because all the flush rivets would undoubtedly mar the topcoat anyway. I’m actually leaning towards waiting indefinitely to topcoat these, simply because I figure they’re likely to get marred at a later time. It’ll be easy to mask around them when I’m ready.

After the priming was done, we had some other stuff to do around the house, but we planned on shooting rivets again after dinner. We reshot a number of rivets in the tail that had been drilled out previously, then started work on the mid bottom skins and the aft bottom skin. Unfortunately, it didn’t shape up to be a good night after this – there wasn’t a great vibe out there and after three bad rivets in a row, I decided we should call it a night. Quitting without a lot done is frustrating, but less so than ruining a bunch of rivets and having to drill them out anyway. Sometimes you have to pick your battles, so to speak.