Well, I didn’t get a lot of useful work done tonight. I’d vaguely intended to muck around with the brake lines and/or fuel vent lines. I didn’t have the fittings I ordered for the brake lines, so I decided to look at the vent lines instead. I’ve kind of been on the fence about how to handle the vent line anyway. The “factory” method has the vent lines enter the gear towers, loop up as high as possible, and then exit out the bottom of the towers, just in front of the landing gear. However, some builders have been taking a different approach, as used by many F1 Rocket builders. That method is to simply bend a series of loops in the wing root and then have the vent exit out of the fairing between the wing and fuselage. This method is much simpler, though there’s speculation that it’s more likely to spit fuel overboard on the ground on a hot day.

Anyway, I’ve been going back and forth quite a bit as to which method to use. Tonight, I got to looking at the vent line routing, and noticed that the exit holes are prepunched in the gear covers. This tiny bit of information was enough to make me decide to do the factory vent line routing. So I measured, planned, cut, bent, and flared, and made my first vent line. I wanted to go ahead and cut the exit portion of the vent line to fit the nice JD Air vent pieces I bought a while back, so I was going to fit those to the gear covers – except they’d be covering one of the screw holes that attaches the gear cover. And the vent has to be installed before the cover. This seemed like a clear no-go, and a quick search of VAF confirmed the problem.

That left me with a pretty simple choice: use the factory routing without the nice vents, or use the Rocket-style routing with the vents. I decided to go with the latter. Tat meant no more vent line work – time to move on to the brake lines.

Then I went to work bending the first line. I was quite proud of the results: 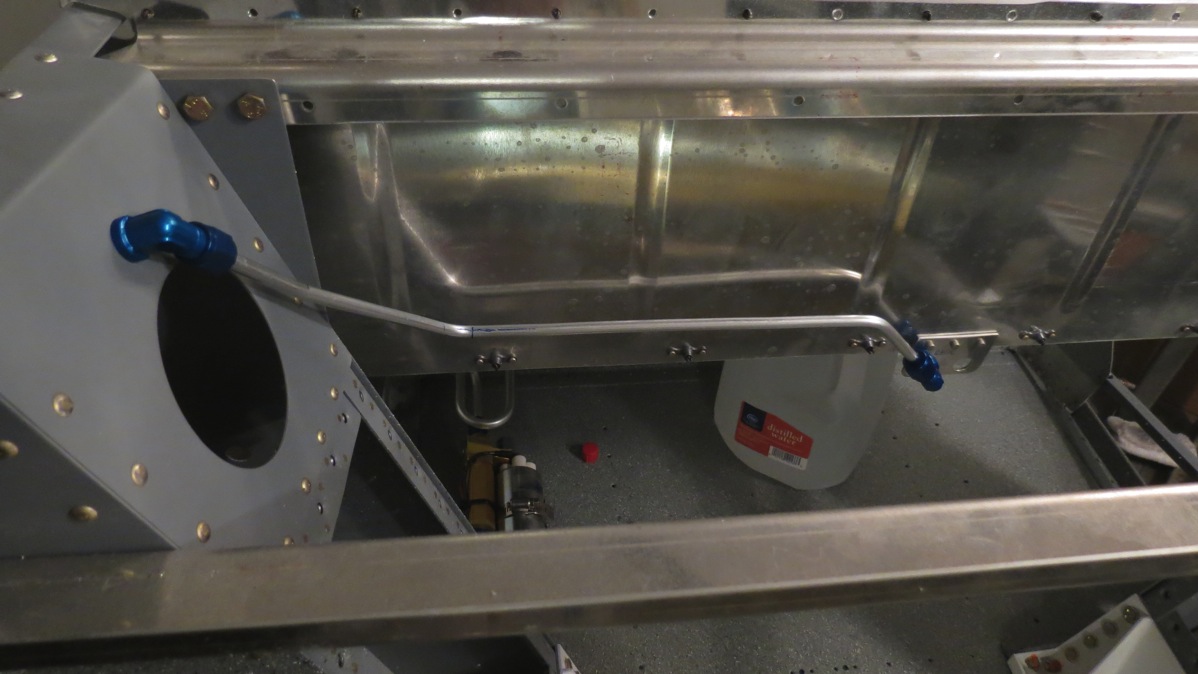 But then I realized there might be a problem. The tops of the towers are pretty narrow, and in addition to the length of the bulkhead fitting, I can only put a bend so close to the flared end of a line. I bent a piece of scrap line and flared it to use as a test, and the results were…displeasing: 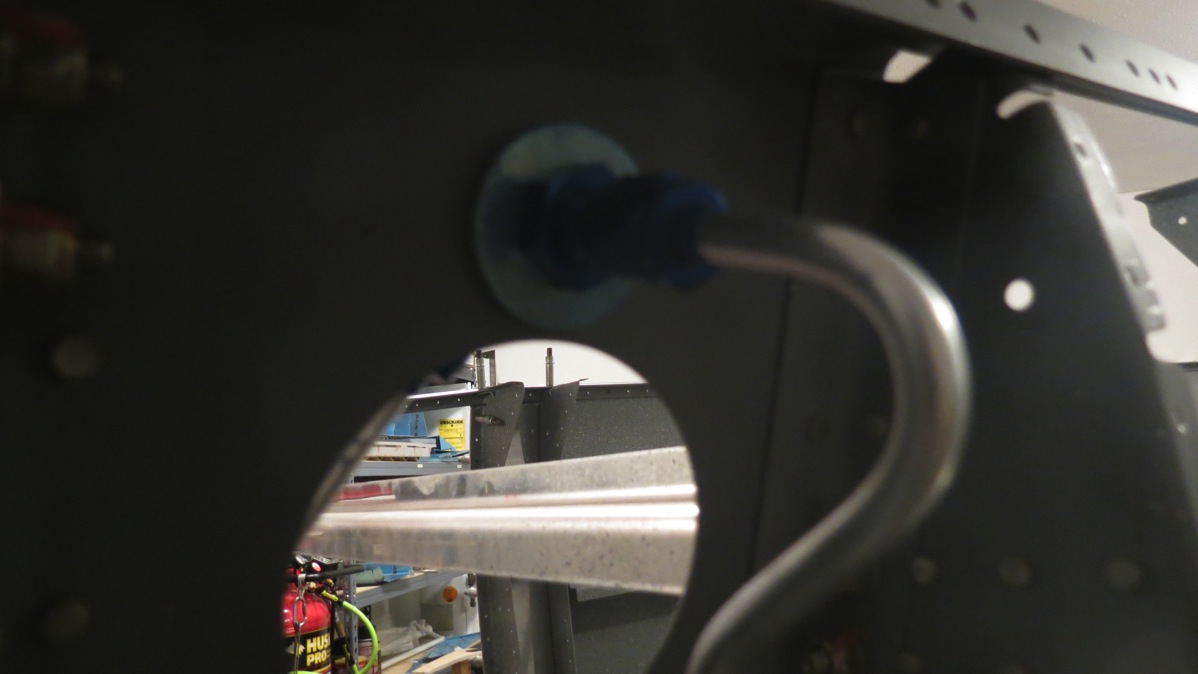 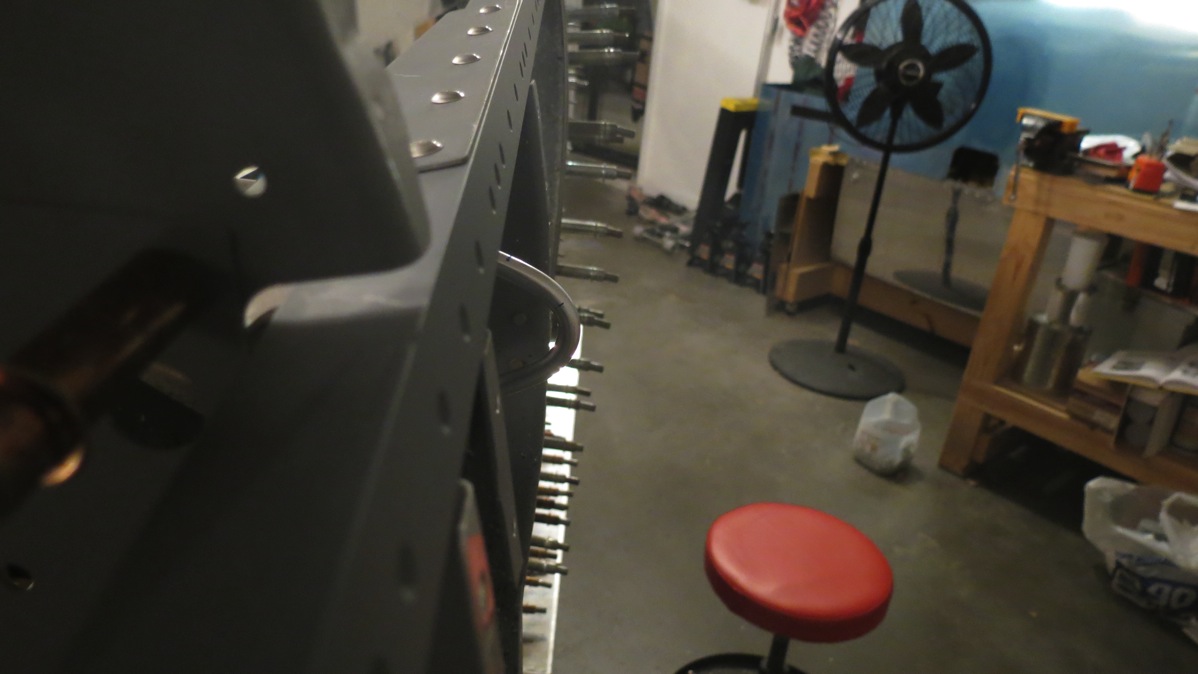 Yup, that’s not going to work, unless I add some some chipmunk bulges to the forward side skins or something. So I basically have three alternatives here:

1. Reverse the bulkhead fitting. This would put the elbow portion inside the gear tower, so clearance in there wouldn’t be an issue any more. The downside here is that the bulky part of the run – the big 180° bend to the fitting – would be inside the tower. This wouldn’t be visible – this area sits behind the panel – but then that’s more stuff in what will probably be a crowded area. The good news is that after taking a look at the panel piers, I don’t think this will interfere with any major components.

2. Remove the bulkhead fitting entirely, insert a snap bushing, and run a single brake line instead of two. This wouldn’t take up a lot of space, but it would basically make it impossible to replace the line down the road. There’d be no way to extract it without cutting it. Though, if that happened, I could revisit the bulkhead fitting idea then. But if I’m going to eventually probably have to do a bulkhead fitting, why not just do it from the start?

3. Figure out a way to run a one-piece line through the upper lightening hole. I think this would be cumbersome and still difficult to replace down the road if necessary.

So that’s where I stand right now. #1 sounds like the best option to me, but I’ve already made enough ill-informed decisions tonight. I’m going to sleep on this one before committing to anything.