Mid side skin bending and modification

So I started out today by looking at putting the bend in the lower aft corner of each mid side skin. First I had to make a run to Home Depot to get some aluminum angle to use for the bending rig; after that, I got to work. The bend here is basically conical, with the forward portion having a small radius of ~1/8”, and a much larger radius at the aft end. The procedure calls for cutting a piece of wood with a 45° angle and clamping it on the skin at the upper bend line, in alignment with the work bench. This sets to upper limit of the bend. The angle is cut in two pieces and the lower end of the skin is clamped between the two pieces, and the bending force is applied to the angles.

Here’s a look at the bending rig clamped in place for the left skin. As you can see, I’ve already put a slight bend in the skin here. 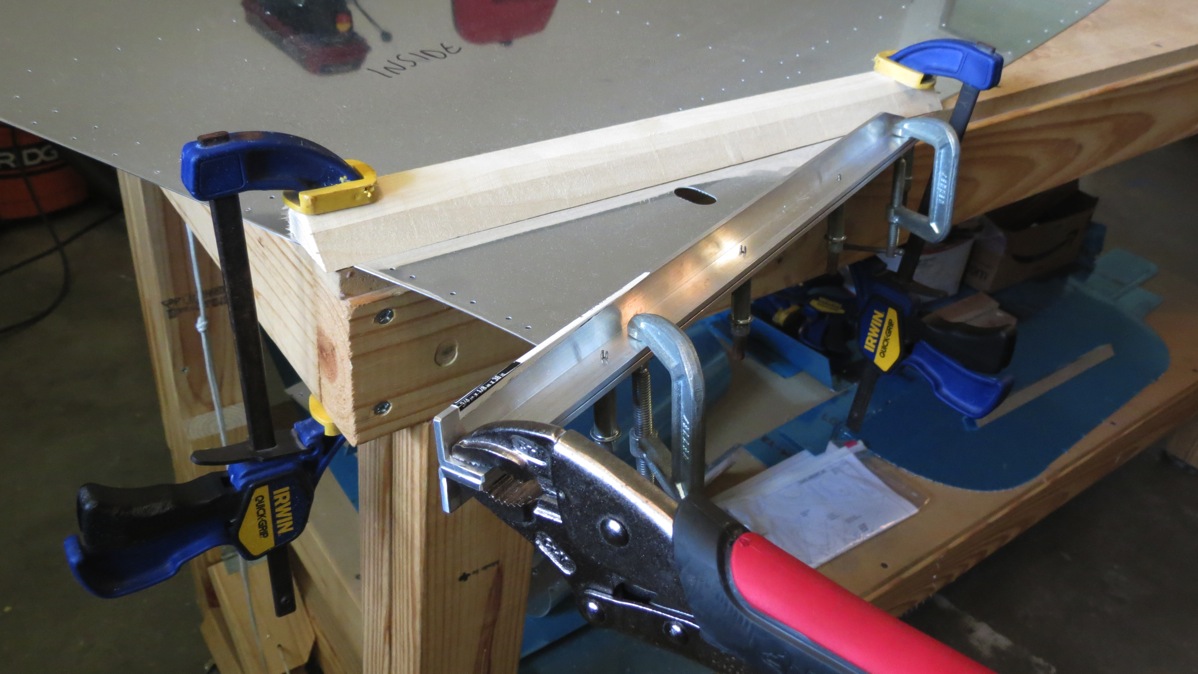 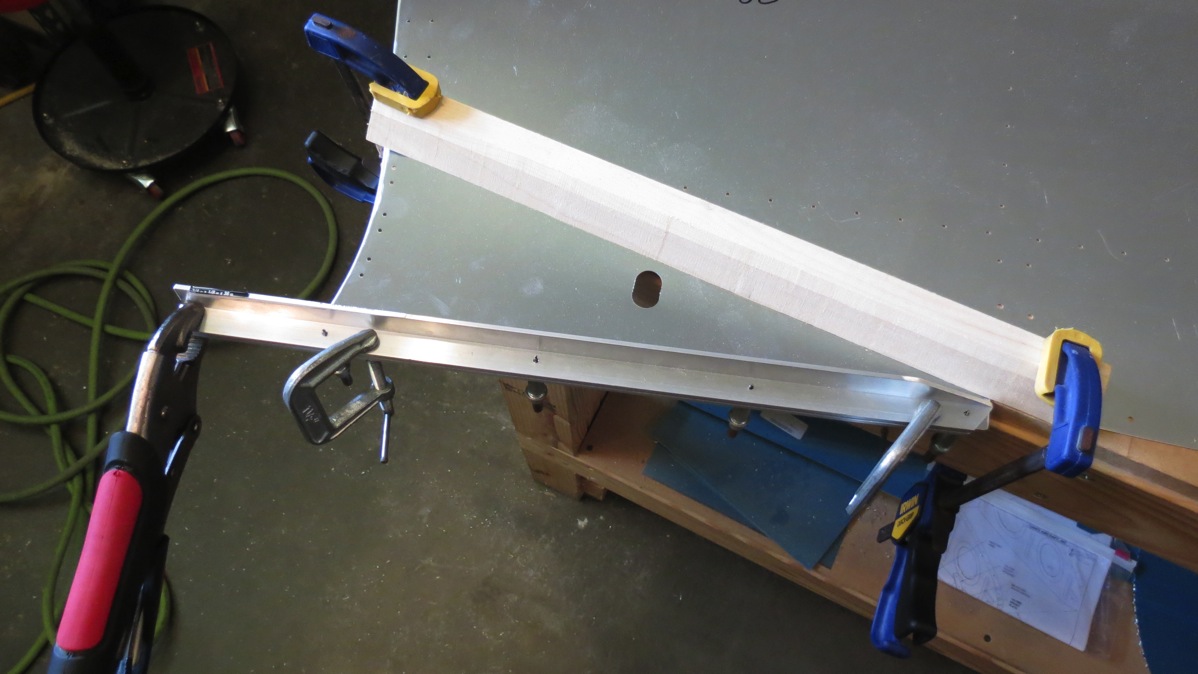 There’s a bevel cut on the forward (left in the above photo) end of the angle to allow it to clear the piece of wood. However, I still ended up making contact towards the end of the bend; I thought this would be OK, but it ends up pushing the wood piece out of place, regardless of how tightly it’s clamped down. Apparently there’s a lot of force applied there at the tight end of the bend. I ended up stopping the bend a little early; the instructions say that it’s better to undergo things here than overdo it. 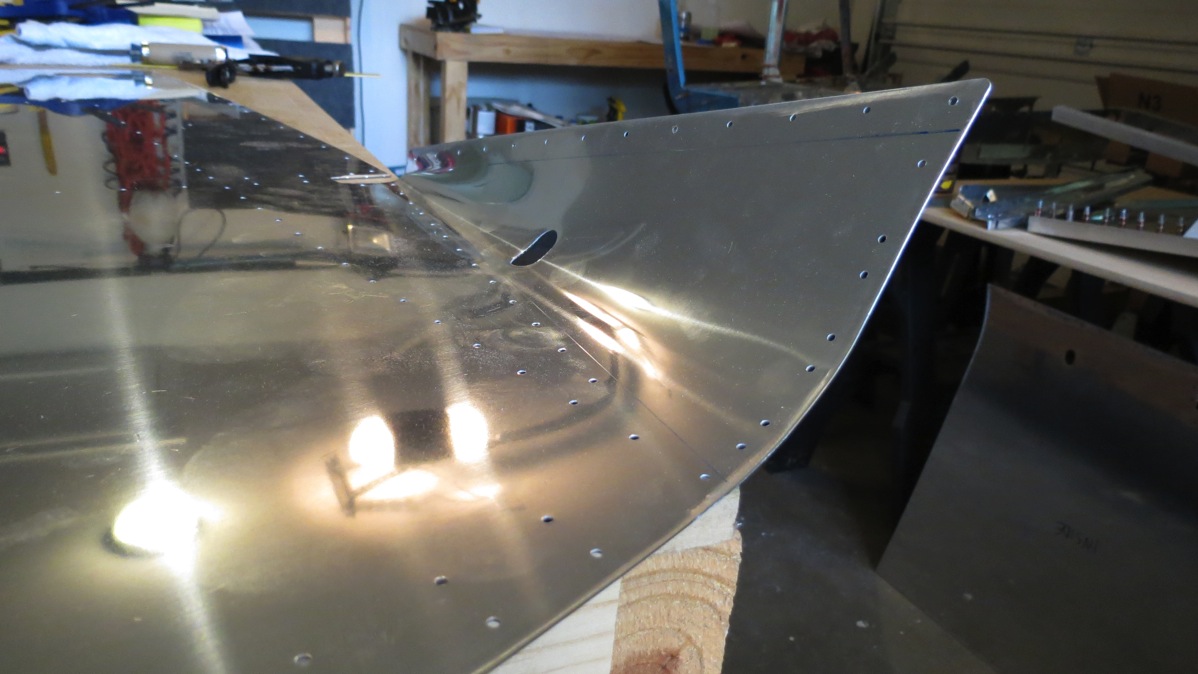 I actually ended up going back and tightening this up later on, after removing some more material from the end of the angle to allow me to bend a little further. But first I had to take my skin and loosely test-fit it to the armrest/seat rib assembly I put together last night: 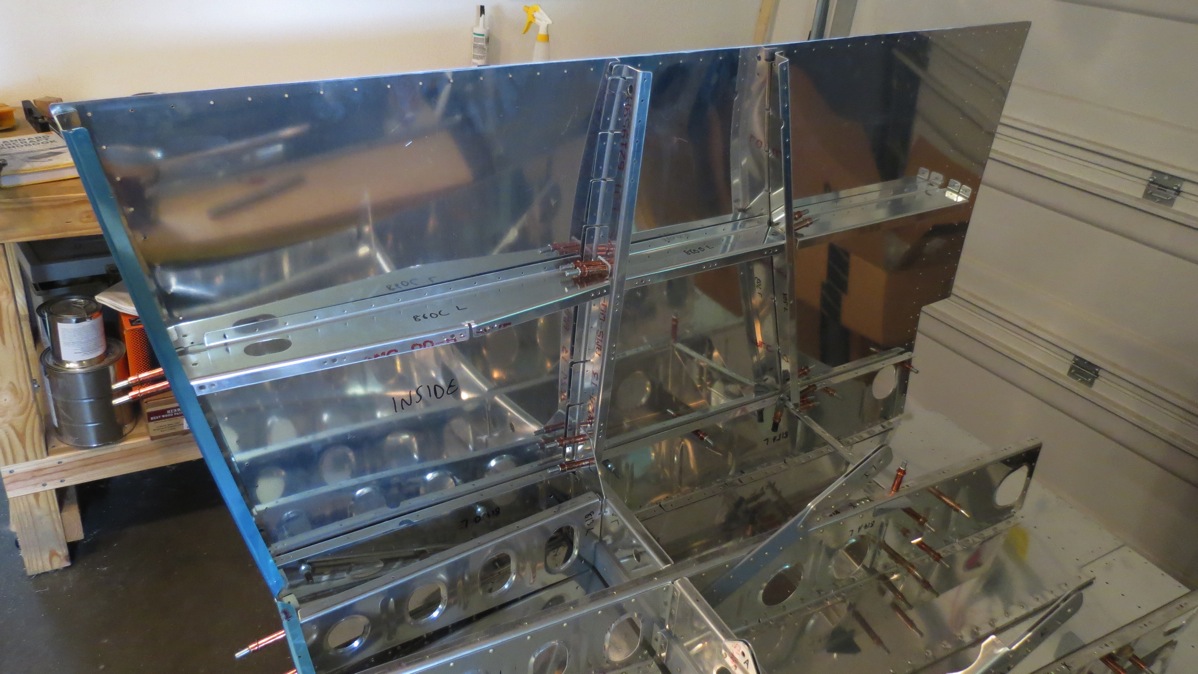 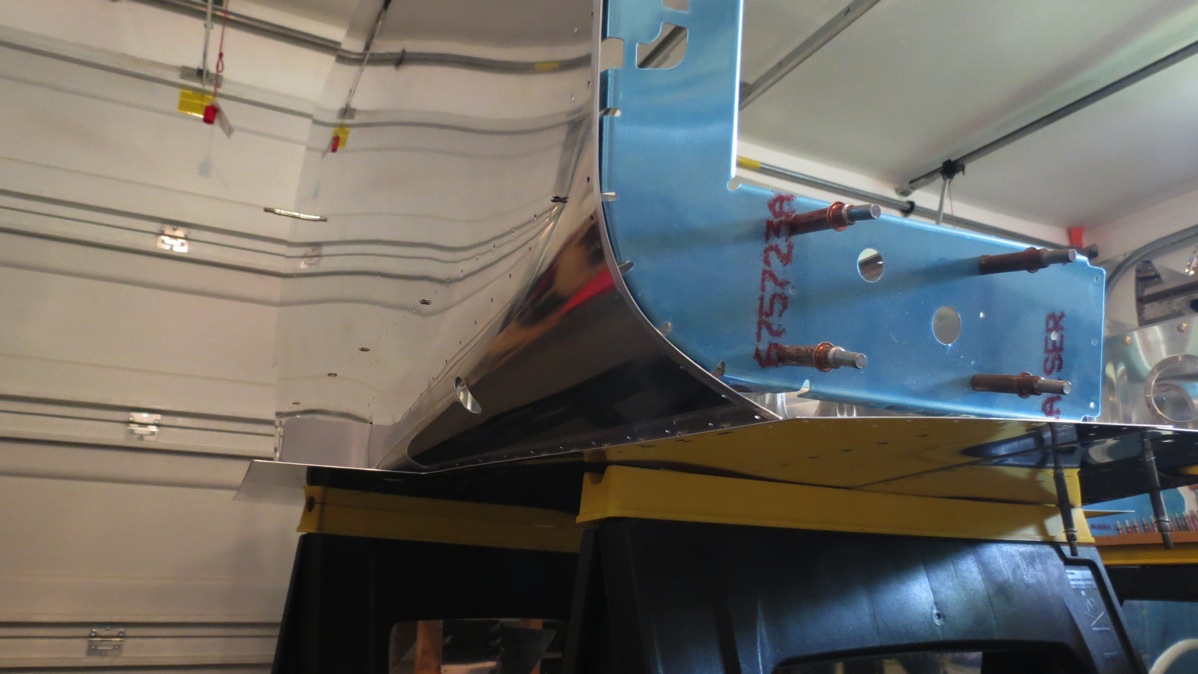 The right skin ended up looking a good bit better than the right, as is usually the case when I do something twice. I think the main lessons learned here (for any other builder that might read this) are to avoid contact between the wood and the aluminum angle pieces at all costs, and to clamp way more than you think you need to. At first I tried to just hold the aluminum angle in place with clecos, but it came loose after only a bit of bending, hence the addition of the small C-clamps.

At this point I ended up taking a break; my allergies had been bothered me all morning and I’d been mostly working through it, but I finally have in, took two Benadryl, and surrendered to the ensuing sleepiness. I felt better after that, so after dinner I went out to get a little more work done. First I moved the seat rib/floor assembly to the work bench and clecoed the center section in place, then match-drilled the holes between the seat ribs and the seat rib supports on the aft side of the center section.

Next, a large hole needs to be but in both the right mid side skin and the outer seat rib; this is where the vent hose for the rear seat will pass through. The vent is originally fed from a NACA duct on the bottom of the right wing: 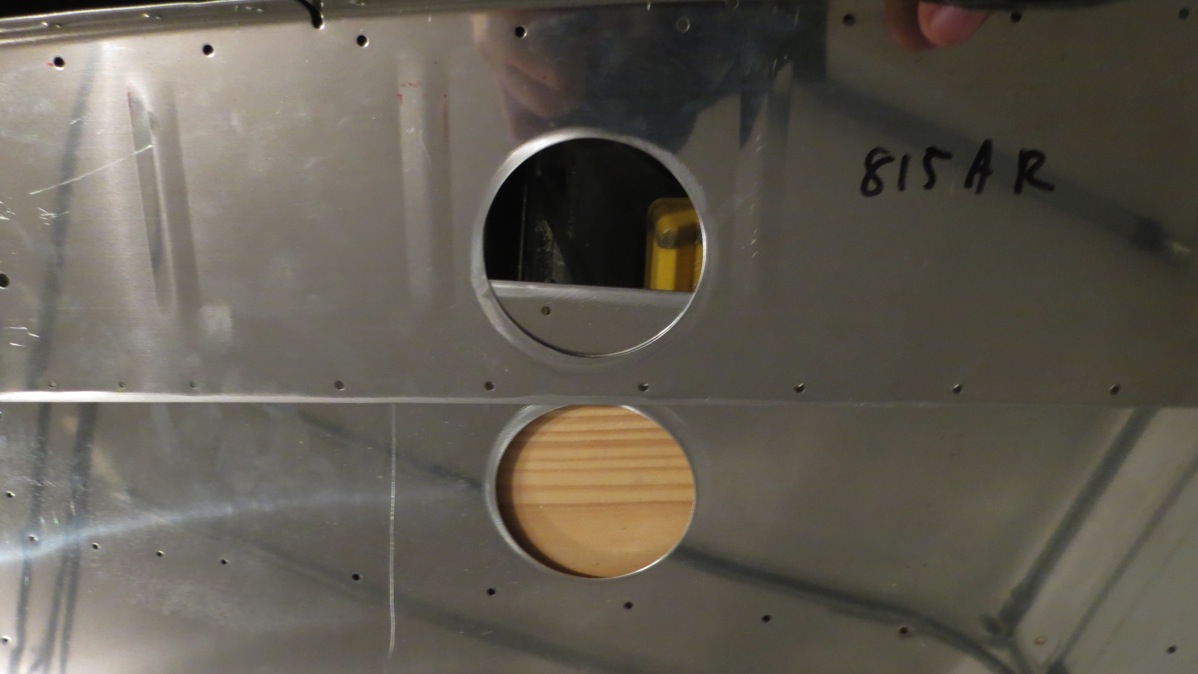 And finally, it was time to start clecoing the mod side skins in place. This is a bit tedious, mainly because it’s tough to access both the cloches and the parts that need to be pulled together. I got as far as clecoing the left skin in place to the seat ribs and rear bulkhead before quitting for the night. I’ll still need to add the armrest assembly here, and also repeat this for the other side. I need to read ahead in the instructions and maybe evaluate if it’s better to add one side skin at a time to better facilitate match drilling and so forth.

Anyway, I’ll close here with some vanity shots of the side skin clecoed in place (more thoroughly this time): 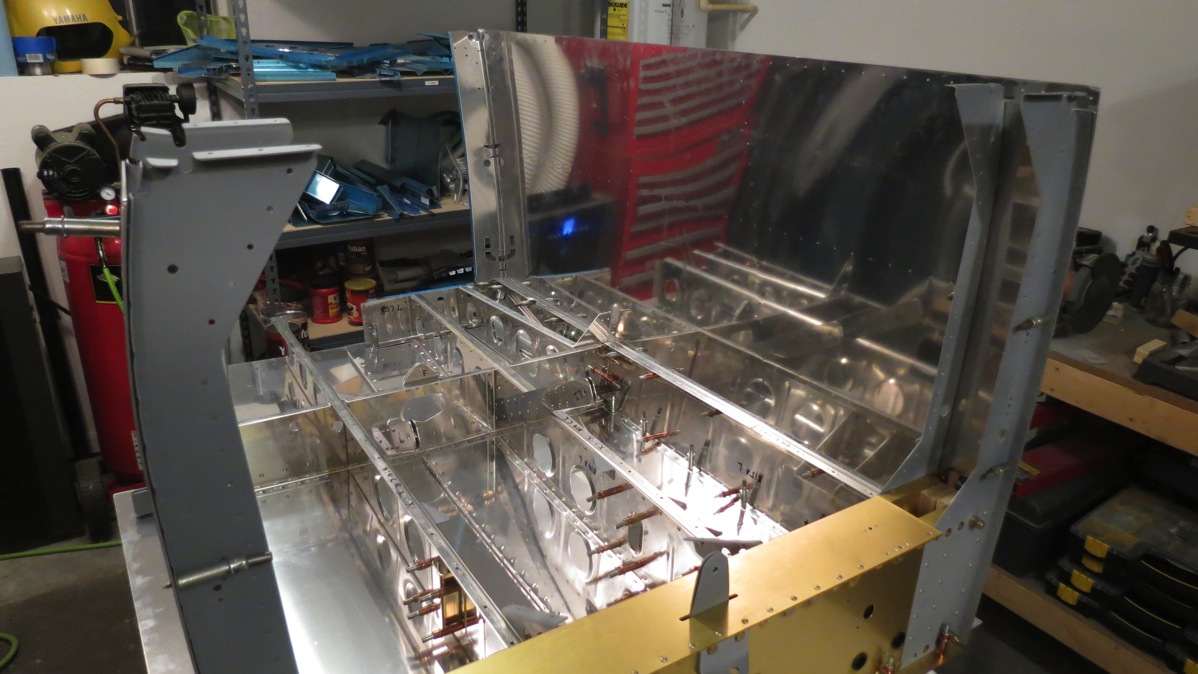 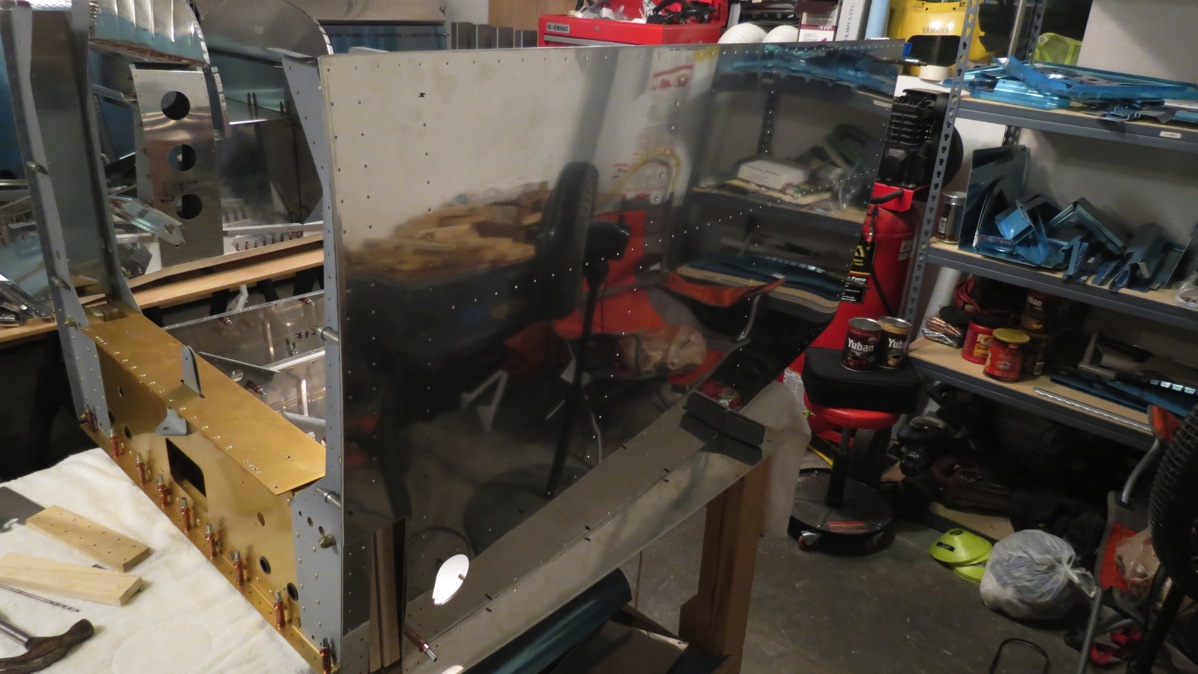