Whew…another good, productive day. I started out by continuing with riveting on the seat rib assembly. First the floor angles get riveted to the ribs, which is easy with the squeezer. Then the forward and aft ribs get riveted in assembly with the rear spar bulkhead, which is way more fun. The top and bottom rivets are easy enough, the middle two not so much. You see, the seat belt lugs on the forward ribs get in the way of bucking those two rivets. It would have been a lot easier to have riveted the seat belt lugs to the ribs after riveting the ribs to the spar, but I was just following the directions. Anyway, I managed to get the lower of the two annoying rivets shot without too much trouble: (the assembly is upside down in this photo) 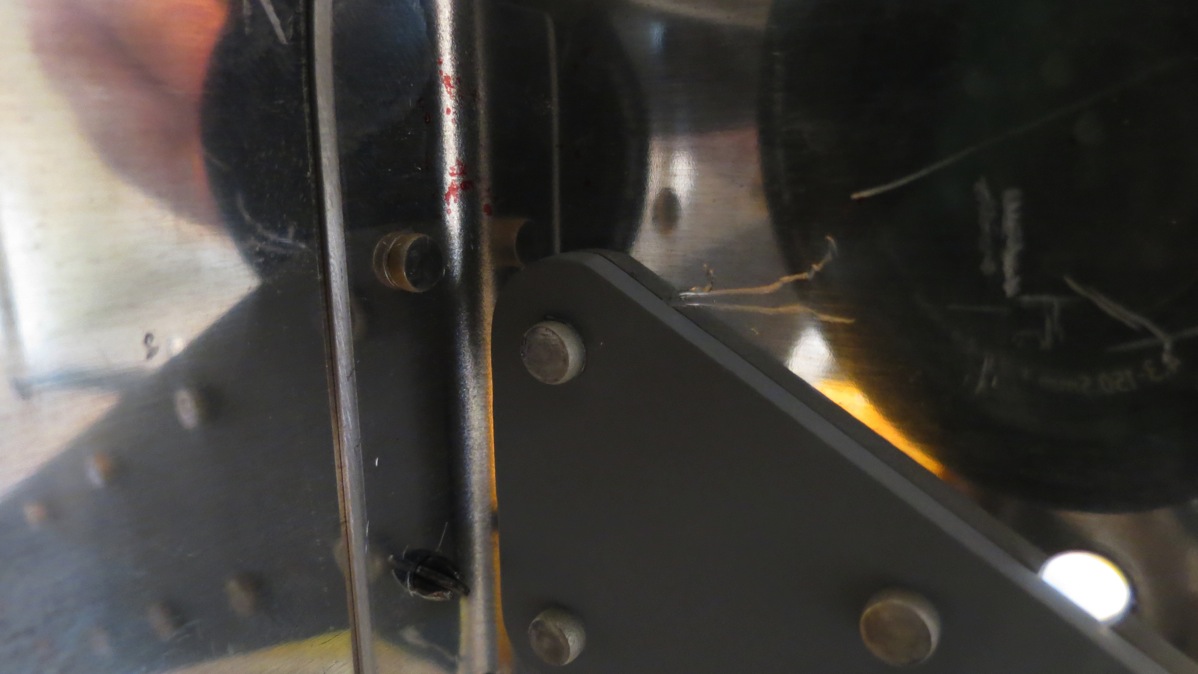 For the other pair, I decided to use MSP blind rivets in place of the solid rivets. I would have done this for the other pair as well, but those rivets go through the spar bars and so there’s far more material thickness, enough that I don’t have any appropriate blind rivets around. 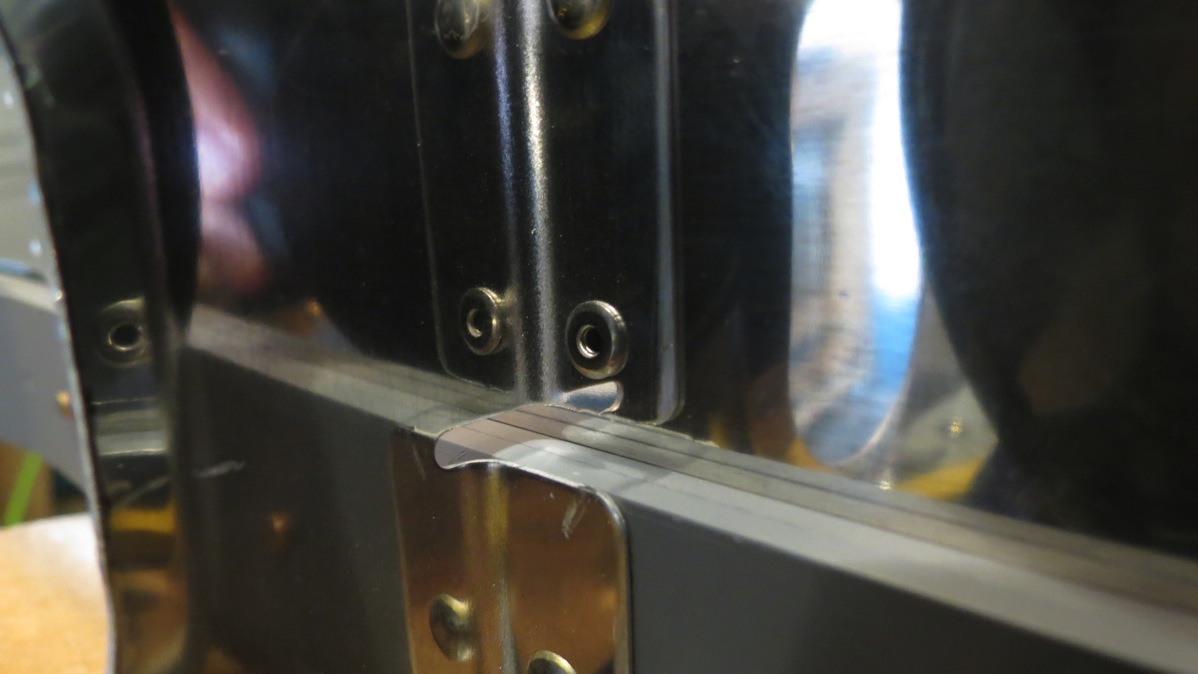 Next, I moved the assembly to a pair of sawhorses, clecoed the bottom skins in place, and went to work riveting them. This was a bit awkward at times, but not too bad. Here’s the finished assembly: (note my markings so I know what not to rivet yet) 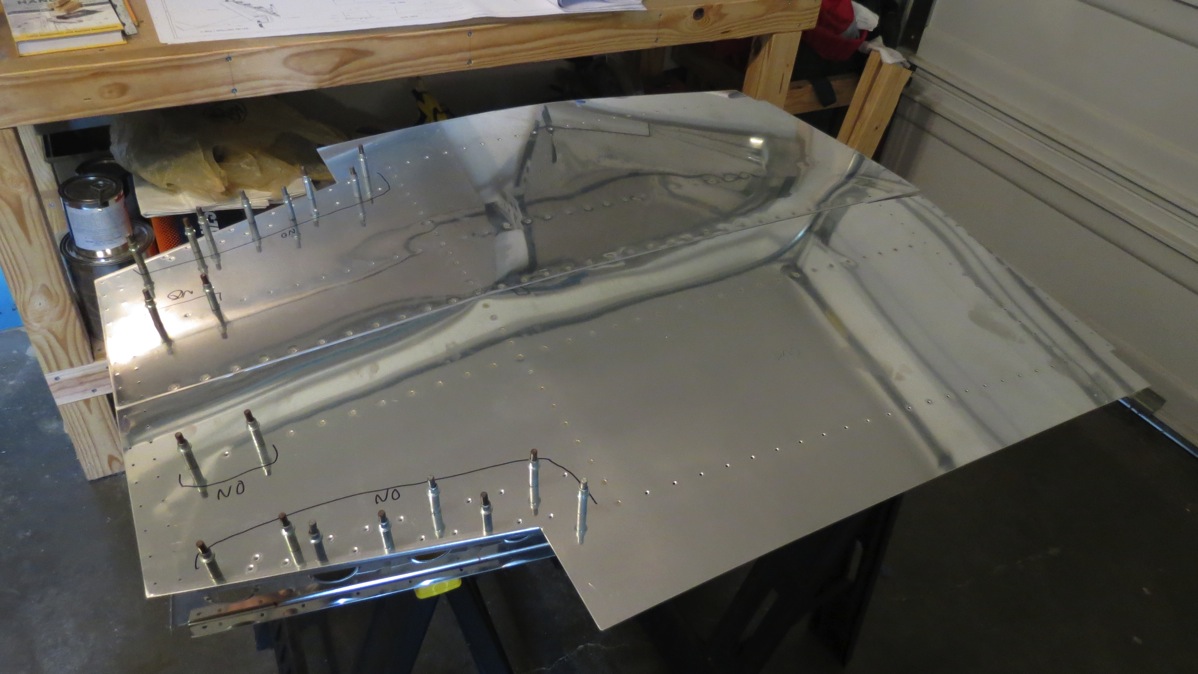 Each lower forward longeron already has a bend preformed in its middle; I get to add a twist on the forward end, then the rear angle is opened up, and finally the rear end gets twisted as well. Twisting is performed by clamping the longeron in the vise and grabbing the end with a crescent wrench and applying some muscle. I used my digital level to measure the bends; here it’s showing the pre-bend state of one of the lower longerons: 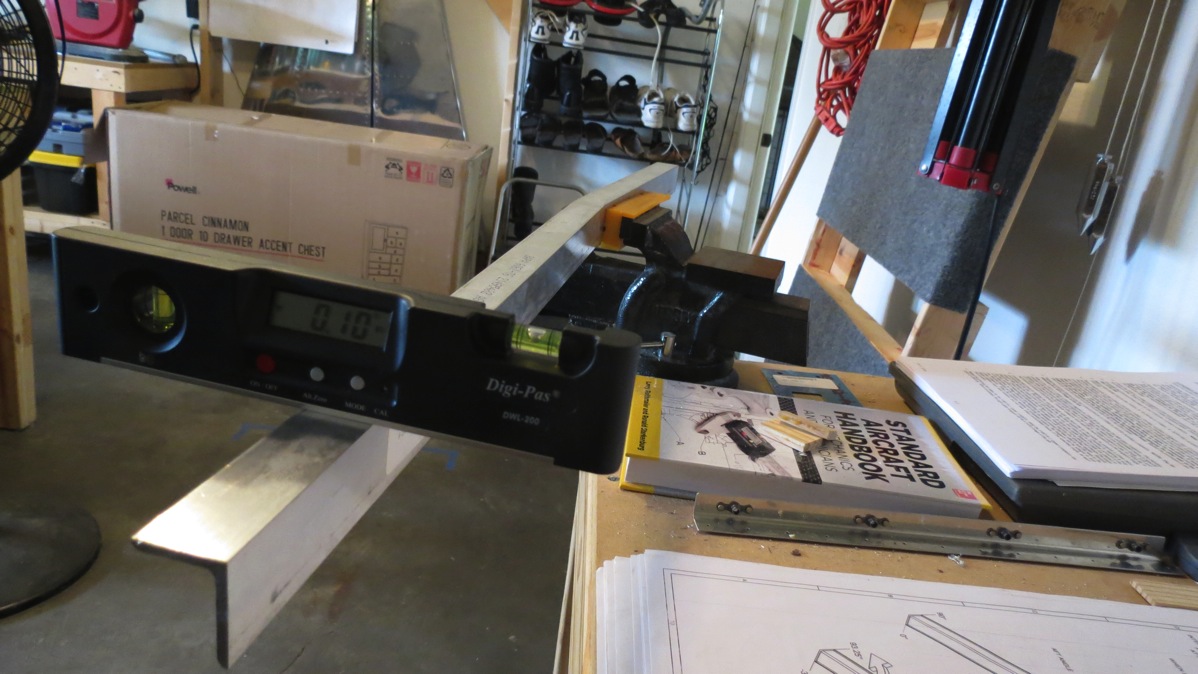 Opening up the rear angle is fun. Basically you put the open end of the angle on a hard surface and then beat on the vertex of the angle with a big hammer. (Actual line from the instructions: “If you cannot get the angle to change…get a bigger hammer”) It takes a pretty impressive amount of force to open the angle. I was taking full swings with my deadblow hammer. I got Josie to come out and take some photos, since it’s been a while since I added some “prove you built this thing” pics. 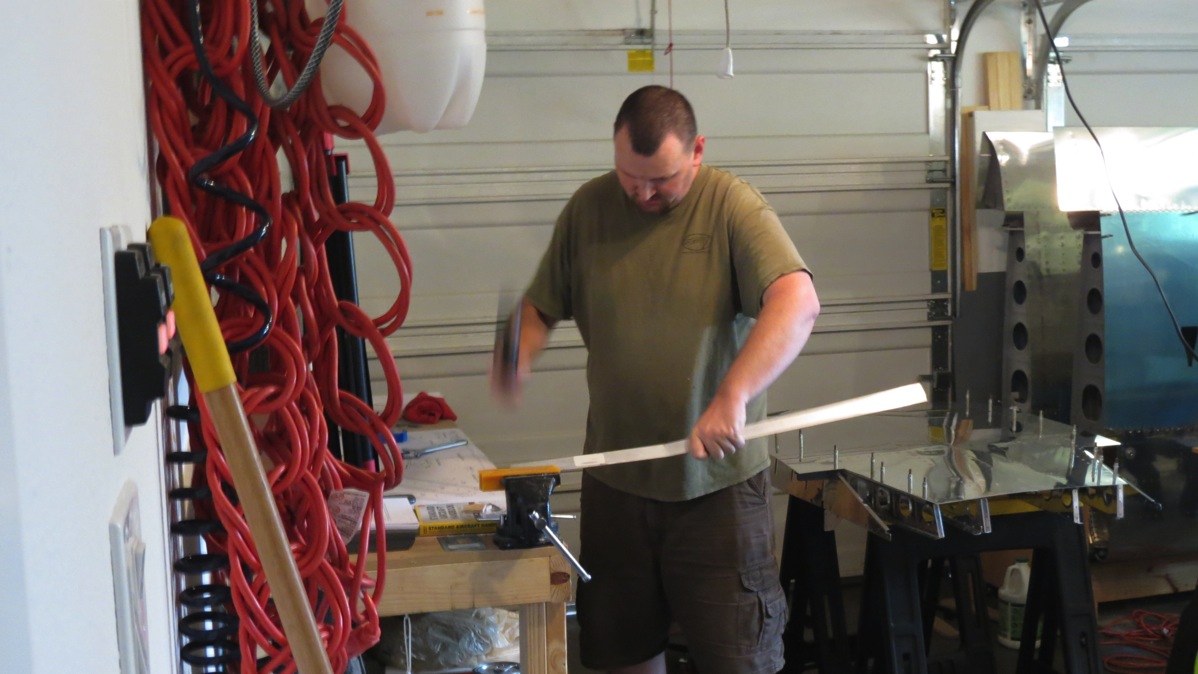 And twisting the aft end of one of the longerons: 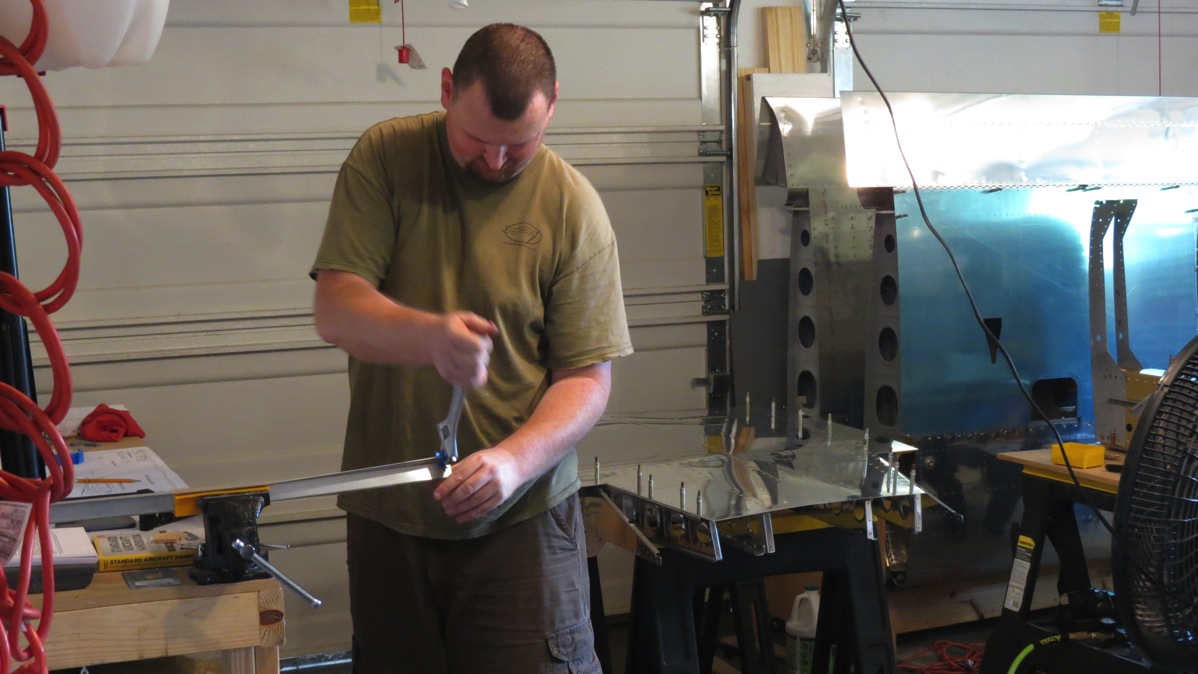 The auxiliary longerons are easier; they just get a gentle bend added to one side. This is done by marking the longeron at ~2” intervals and progressively clamping the longeron at each mark and giving it a good whack (that’s the technical term from the instructions) with the hammer. Then we move on the real fun, the main longerons. Each longeron has two bends in it, and both bends are made in two dimensions; that is, down and inboard for the forward bend and up and inboard for the aft bend. It’s still just a matter of clamping the longeron in the vice and assaulting it with a hammer, but given the length of these things, I was forced to turn off the A/C and open the garage door: 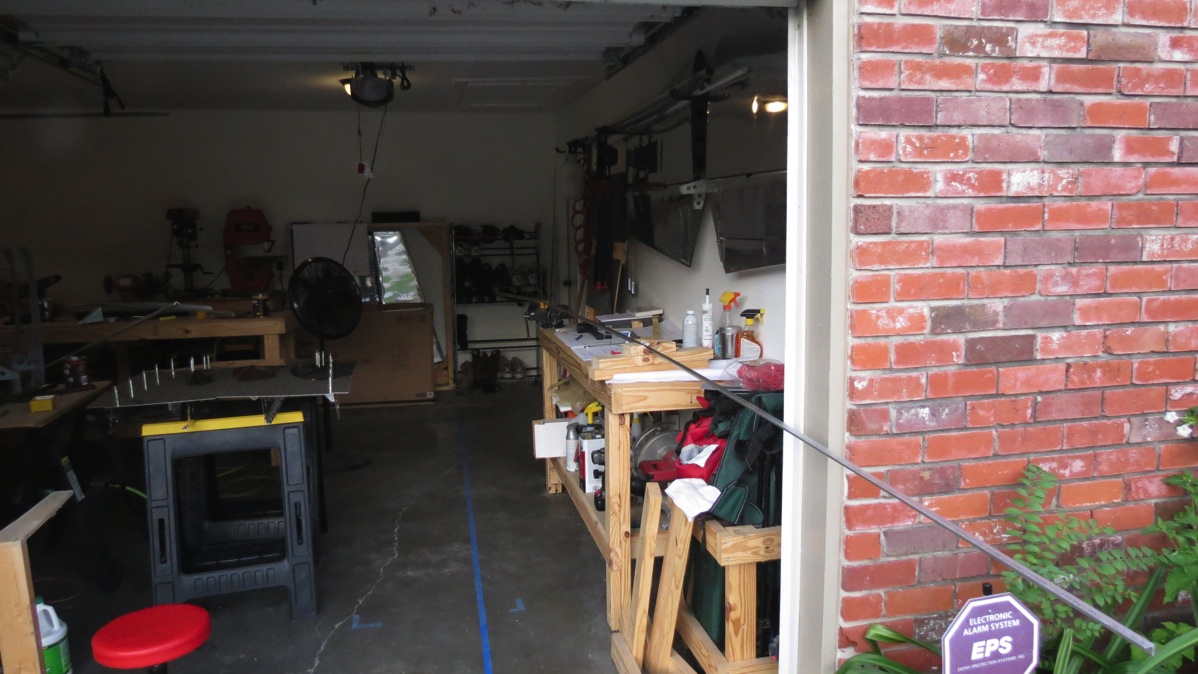 I’ve seen builders seem to stress about these bends, and I suppose I can see why: if you ruin something, you get to pay shipping for a 16’ long box, which can’t be cheap. Hoever, I found making the bends to be pretty straightforward. There is an element of trial-and-error due to the two-dimensional bends; bending in one dimension tends to change the bend in the other dimension, so there’s a lot of back-and-forth until everything is right.

Of course, since the first longeron was fairly easy, I got complacent with the second one. I clamped it in the vice so I could measure and mark the bend lines, then went to town bending…only to realize I hadn’t moved the longeron so the bend line was in the right place. Yep, I bent it at the wrong spot. Fortunately, I was able to straighten the misbend and then get everything fixed up properly. I wanted to take a photo of the completed longerons, but it turns out it’s tough to take a good photo of something 16’ long and 3/4” square.

I was about ready to call it a night at this point, but I wanted to read ahead in the instructions and see what came next. I’d kind of figured that I’d move the forward fuselage assembly and clamp the longerons in place to kinda sorta store them, but it turns out that the main longerons don’t actually get installed until way down the road. So now I’ve taken two long angles that I had stored nicely, and bent them to where they’re way more annoying to store. I ended up cutting a few pieces of paracord and hanging the bent longerons from the garage door tracks right beside the other long angle stuff.

From this point, it looks like I get to fit the lower and auxiliary longerons to the forward fuse, along with some additional structure for the center section and gear towers. Guess I’ll find out about that stuff tomorrow night…