The weather today turned out better than I expected, though far from perfect. There were sporadic showers through the afternoon, but in between it was ice and sunny out. So I managed to get in the spray gun practice that I’d wanted to do, which took up a lot of the day.

First I just filled the hopper with water and practiced spraying it against the side of the house. This was just to get familiar with the flow and pattern controls, and that didn’t take too long. Next I got some latex paint I had sitting around and thinned it to the recommended viscosity from Stewart (25 seconds in a viscosity cup). Pretty thin stuff. Then I went to town spraying the latex paint on some cardboard and the random sheet of plywood I use as a backer when I prime. This let me see how I could control the atomization of the paint with air pressure, but was kind of unsatisfying in terms of seeing how the paint was going on. So I scuffed a couple of pieces of scrap aluminum and shot paint on them. That was actually disappointing; the latex paint wouldn’t flatten out at all, and the coverage ended up spotty with tons of fisheye spots.

I wasn’t sure whether this was a problem with latex on aluminum, or me having not been particularly thorough about cleaning my test patches. So I decided to just go ahead and mix up a small batch of primer and shoot it on some more test patches. This time, I cleaned the patches thoroughly, using the EkoEtch stuff I got from Stewart. I also gave each patch a final wipedown with acetone before starting to prime.

I was relieved to see that the primer went onto the aluminum quite nicely, just about as easily as the rattle can stuff does. It did take a little experimentation to get the flow control at a place where I got good coverage; I overdid it on one patch and got some lovely runs. The other ones ended up looking halfway decent, though: 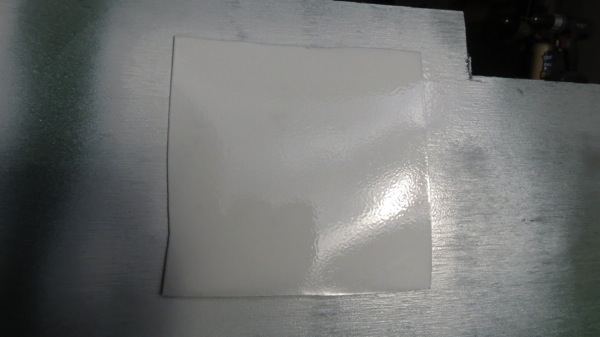 As you can see, I still got some orange peel texture, so I still need some practice, but overall the coat looks good. I especially like that it has a sort of semigloss finish; between that and the color, I think my idea of just using this as the topcoat for the cockpit interior is going to work great. I’ll give these patches a day or so to dry and then abuse them with solvents and sharp objects to get an idea of how durable the finish is, but with it being an epoxy primer, I’m pretty confident it should be plenty durable.

With that done, I moved on to match drilling the left aileron. This went a lot faster than the right one since there was a lot less time spent scrutinizing the plans to ensure everything had gone together right. After pulling the aileron apart, I got started deburring the rivet holes in the ribs, then I decided to get the counterweights countersunk for their flush rivets. That was a little more challenging than normal countersinking, since I was working on a piece of pipe. I cut a chunk of 2×4 at an angle and attached both halves to a base to make a sort of holder for the counterweight pipe. The holder was clamped onto the drill press table with the countersink cage in place. Turned out to be a pretty nice setup: 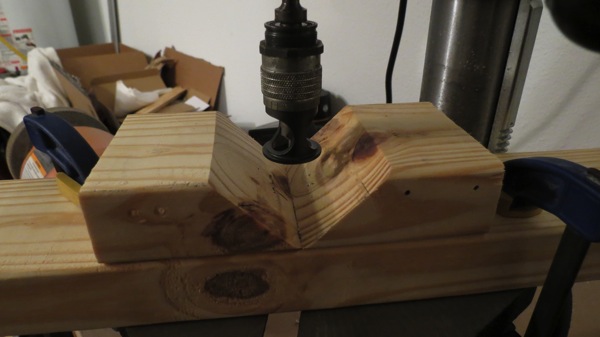 I got Josie to come help hold the pipe (it is 4+ feet long after all) while I ran the drill press. We made quick work of the countersinking this way: 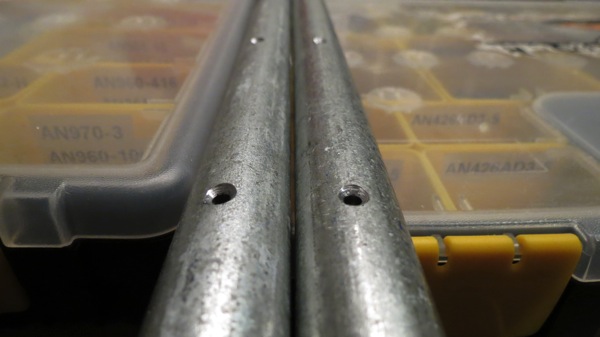 After that, I countersunk some flush rivet holes in the spar reinforcements, did a bit more deburring, and called it a night. Tomorrow I should be able to finish deburring and dimpling all the parts, I think. Too bad the weather will be so-so again, but maybe I’ll be able to get in some priming. It’d be nice to be able to start assembling the ailerons this week. If I can’t prime, I guess maybe I’ll move on to messing with the flaps.