Mostly sort of a token work night tonight. I thought riveting the flap brace might be a little annoying, but it actually went fast. The only mildly annoying part was shooting the three inboard most rivets on each brace – that requires me to hold the bucking bar in between the closely-spaced wing walk ribs. Got it done with no bad rivets though. The rest were all easy to access.

Not the best photo, but it’s kind of hard to capture some of this stuff: 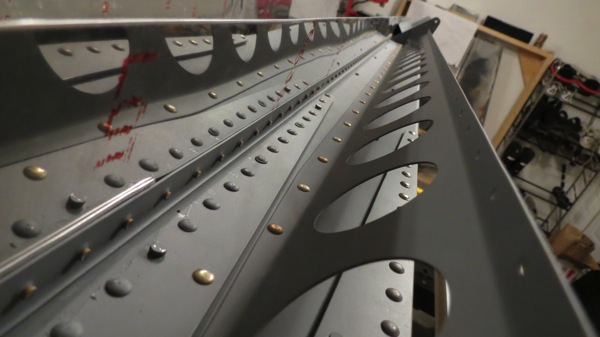 At this point, I’d only been working about 40 minutes. So to fill out a real live hour of work, I warmed up the bench grinder and deburred the edges of the aileron spars, then clamped them i the vice and deburred the lightening holes with the die grinder. Going by the instructions, the next step on the ailerons is to prime the spar and reinforcements and the rivet them. I guess I’ll see what else I can do to prep more stuff for priming this weekend. I’d think that I could go ahead and do some match drilling/prep work on other aileron parts.

I also had a delivery from Aircraft Spruce today. It took forever to ship, but my Stewart Systems EkoPoxy finally showed up, a whole gallon of the stuff: One thing I want to do this weekend is to try out my spray gun. Rather than initially test with the EkoPoxy ($210/gallon!), Stewart Systems recommends thinning regular latex paint to the appropriate viscosity to work out the paint gun setup. Guess I’ll grab some cheap stuff from Home Depot and spray-paint plywood in the driveway. I’m eager to shoot some of the EkoPoxy on scrap aluminum so I can see what the finish looks like. If it goes on relatively smooth, say with a satin finish, and seems durable (and I’d think an epoxy primer would certainly be durable), then I plan on just having my interior finish be the primer.