Wing skin riveting and other stuff

Unsurprisingly, the main task of the day was to keep going on skin riveting. Around early afternoon the left wing was all done: 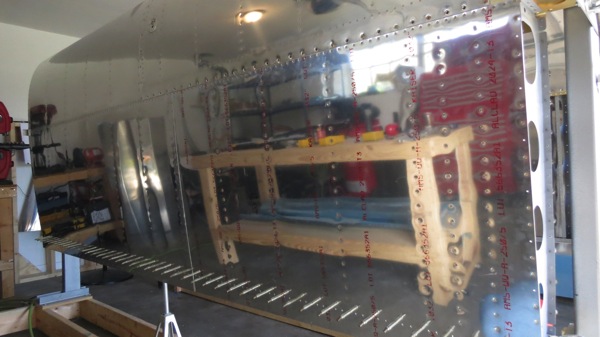 Well, except for those clecos at the bottom. Those are the skin-spar rivets, and they’d be tough to get to in this position, but are accessible with the squeezer. So I figure I’ll just squeeze all of those after I get the wings off the stands and in the cradle.

The seam between the two skins doesn’t quite sit flush though. It occurred to me as I was clecoing these skins in place prior to riveting that maybe I should roll the edge of that top skin a bit. Some research indicated that other builders were about 50-50 on doing this, but the most important thing I learned is that you have to roll the edge before dimpling. So that particular ship had already sailed, nothing to do but shoot as-is and hope for the best.

It’s really not that bad, and I imagine it’ll disappear under paint: 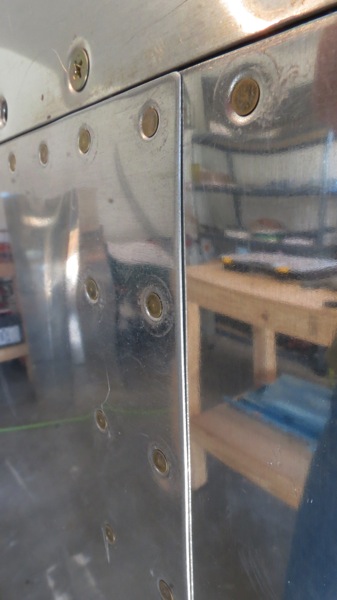 Later in the evening, we got through about half of the rivets on the right inboard skin before deciding that it was time to call it a night. Amusingly, around this time we also noticed that Dude had laid down and gone to sleep out in the garage – while we were shooting rivets. Even though the Mutt Muffs block out sound, that’s still quite a racket to sleep through: 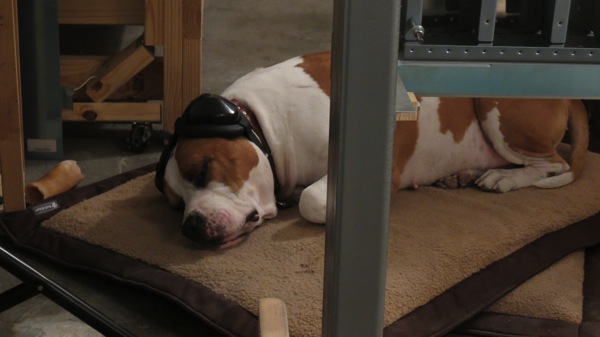 In other news, I took advantage of more good weather to do some wood-cutting to prepare for building the wing cart. We made a midday trip to Home Depot for supplies and material, and I should have everything I need now. I made the cutouts in one end of the cart for the leading edge to fit in, and cut some of the 2×4 and 2×6 braces that also go on those end pieces. That just leaves me needing to cut four 2x6s to length after I take apart the wing stands, and to make a few more corner braces from other wing stand scrap. I figure that with the days starting to get longer again, I can always bail out of work a little early one day this week so I can make the last cuts while it’s still daylight.