Yup, it’s priming time again! With the LE ribs prepped, it was finally time for the joy of scrubbing and priming. Before I got started priming, I decided to try to work out a better way to hold the ribs while I primed them. Most of the time I’ve just been setting parts on on sheet of plywood on saw horses, but it’s tough to get good coverage this way, and things become even more annoying as the spray can gets empty and it won’t pray if not held straight up. When I did the main wing ribs, I rigged up a whole system of little hooks on a string in the backyard, but that had its own annoyances. Even with the ribs secured at the top and bottom, they would twist in the wind, which made things annoying in its own way.

So today I started to think of maybe using the plywood, but at an angle. That would probably hold the ribs steady, but mostly vertical. But how to do it? Nails would be annoying. I hunted around the garage waiting for something to jump out at me, and finally it happened. I had some little twists of aluminum from trimming something a while back, and I cut them into short lengths that I then bent into little s-hooks: 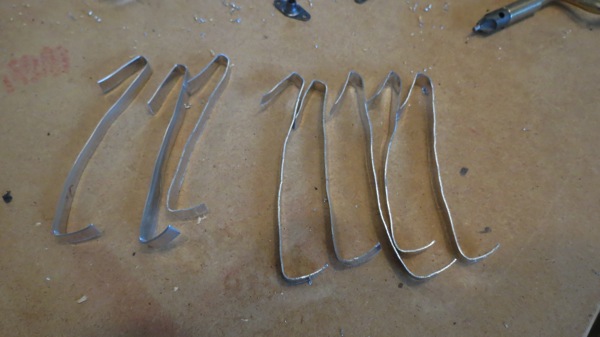 These fit nicely on the 1/4” plywood sheet I use, and as a bonus, they’re not permanently attached and so I have some flexibility for how I use these things. I suspect they’ll continue to be handy. But now I had another little issue: I tried leaning the plywood against a sawhorse, but that put the lower part of the ribs pretty close to the ground, which would probably be an issue for ease of spraying. Maybe I could somehow mount it up higher on the sawhorse…back in the garage to look for something I could use. Aha! I still had the length of 14” tubing that was intended for the fuel pickups, but I didn’t use it. I cut it in half and made two little hooks that hung on the sawhorse, and finally I was in business. 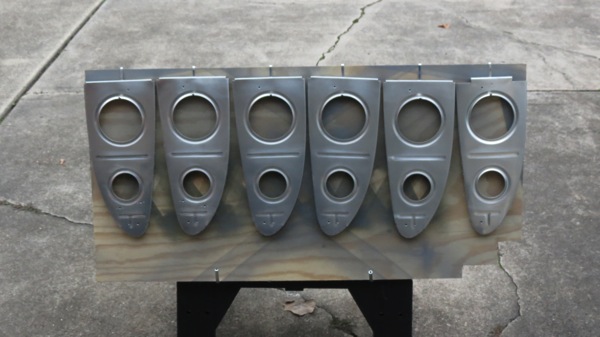 About the only issue is that I can’t easily spray the outside of the flanges, but I found I could easily just hold each rib after I’d sprayed everything else and get those flanges.

The only problem I ran into was…I ran out of primer while spraying the inside of the second batch of ribs. So that kind of put an end to work for the evening. I’ll have to see if I can get to a NAPA tomorrow and get some more 7220 primer, and maybe finish shooting those ribs after work tomorrow.