Yes! I am still building an airplane. Kind of surprising how being out of town for a week got me out of the working mood. Last weekend might have been a good time to get going again, but instead I was attending an EAA SportAir workshop on electrical wiring and avionics and such. Just like the sheet metal workshop I did prior to starting my tail kit, it was an incredible learning experience. Yesterday, I had my third tailwheel training flight with Joy at Texas Taildraggers (HIGHLY recommended, by the way), followed by the FlightAware Christmas party in the evening.

Truth be told, I came close to spending today bumming around the house too, but around mid afternoon the weather was so great that it seemed a waste to not finish prepping the right leading edge ribs and get them primed. Of course, as soon as I got started working in the garage, a nice rain shower rolled over and it stayed cloudy the rest of the afternoon, so I didn’t prime after all. My new plan is to get the left leading edge parts prepped this week so I can prime everything next weekend.

Anyway, down to details. Last time out, I’d deburred the right LE ribs and such, so all that was really left before they were ready for priming was to dimple/countersink the rivet holes as needed. I ended up running into some problems here; way back when I drilled the rivet holes in the inboard LE ribs, I felt they were a little closer to the rib web than I’d like, but I figured they were fine. Turns out they were close enough to make dimpling a bit difficult due to the size of the dimple dies. I managed to get all the holes done OK, save for one at the nose of the rib. There was no way to get the regular die in there, and none of my other special dimpling tools fit either.

So on the spur of the moment, I decided to countersink the hole instead. Bad idea; I neglected to consider the thickness of the material, and the resulting countersink went all the way through the material and enlarged the hole. Stupid. At first I considered fabricating a small doubler plate to go inside, but that would still leave a bit of a void in the hole. Finally, I realized this was a great place to use a NAS1097 oversize rivet; the enlarged hole was still smaller than #30, so this is a perfect solution. I’ll just enlarge this hole and the other two holes to #30 and things will be fine.

Here’s the enlarged hole with a rivet to show how oversize it is: 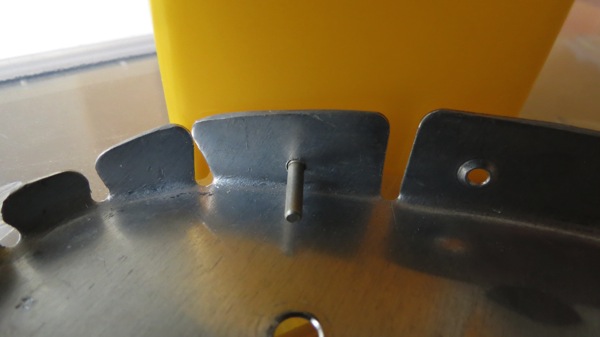 With the right LE parts ready for priming, I went to work on the left LE. I pulled the two outboard rivets and drilled the nutplate holes for the landing light reflector mount. About that time, dinner was ready, so I went in to eat, and after that, I got to doing some research for my fuselage kit order, which I intend to send in tomorrow. I think I’ve decided on the items I’ll add/delete from the kit – I’m going to do rear seat rudder pedals, mainly because the formation clinics I’ve seen require them, and I do want to do form down the road. I’m also doing electric aileron trim, and I’ll be chucking the heavy stock steel gear legs in favor of lightweight Grove units; in fact, I’ll probably end up ordering the super-slick airfoil legs.

Ordering the fuse kit really starts the clock ticking; I’ll need to have the wings off the stands before that kit arrives, or I’ll have nowhere to put it. But I don’t think that’s a huge challenge to be honest; I only need to get as far as riveting the top skins before they can go into storage. My plan is to leave the bottom skins off for the time being to facilitate installing an autopilot servo and any other internal stuff I may end up needing as time goes on.