Well, not an especially productive weekend. Saturday was eaten up with tailwheel training and a friend’s birthday, and today seemed to really want to be a lazy do-nothing day. I went along with that for the most part, but figured I should get something done this weekend.

First up, I finished drilling the nutplate holes for the landing light reflector. Nothing to crazy here; the nutplates get clecoed in place through the pilot holes and they’re used as a template to drill the rivet holes. I wanted to mock up the reflector between the ribs for a photo op, but I realized it couldn’t really be done without the nutplaptes riveted in place – something I’m not going to do until I have the ribs primed.

So what next? Well, I guess I might as well start general prep for this assembly. i already had two ribs out, so I pulled the rest after marking them so I could put them back in their places later. First item of business was the joint plate, to which the fuel tank will attach with screws. I reamed the screw holes out to full size, deburred, and then went to work drilling for the tank attach nutplates. And this is where I messed up.

I started just like I had done with the reflector mount nutplates, by clecoing all the nutplates through the screw hole. After aligning them like I wanted, I went down the line, drilling one of the rivet holes in each one. The next step would have been to put a cleco through that hole before drilling the other, but I realized I’d made a stupid mistake. With the reflector mount, I was clecoing through a small pilot hole, so the nutplate was guaranteed to be centered. Not so much here; the screw hole was much larger than the right size cleco for the nutplate. Thus there was no guarantee the nutplate was centered.

If I’d dimpled the screw holes first (these will be flush screws), then there would have been positive location. So I pulled all the nutplates, got out the c-frame and dimpled the screw holes. I figured I’d put the nutplates back on after that and maybe, by some miracle, they’d all line up. And surprisingly, they almost all did, except for two, which looked kind of like this: 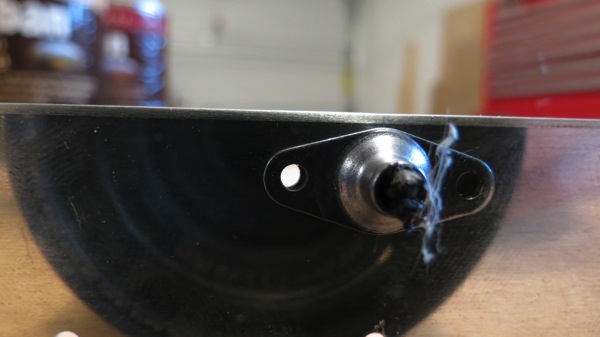 Ugh. My first inkling was to chuck this part and replace it; after all, it’s just a simple strip with a bend in it to match the leading edge profile. No problem to replace, right? But then I thought about it more; this part has to align with three other parts – the inboard leading edge rib, the leading edge skin, and the tank skin. The more I tried to imagine how I’d drill the new parts it would align properly, the more I realized it was going to be a tough task.

The other option would be to drill the offending holes out to #30 and use a larger flush rivet. In almost all circumstances, this would be a complete no-no; there are very specific distances required between the center of a rivet hole and the edge of a material, to ensure proper strength. Nutplates, however, are a special case. Here, the rivets don’t serve any real structural purpose; they merely hold the nutplate in place while the screw is tightened. Once that’s done, the screw and nutplate are taking the entire load.

With that in mind, along with the difficulty of putting in a new part, I went with the larger hole. First I modified two nutplates by drilling one side out to #30 on the drill press. Then I clecoed them back in place on the joint strip and used the nutplate as a guide to drill out the hole in the plate. Then I could drill the other side of the nutplate as normal.

Here’s one of the modified nutplates. Not that the left hole is larger than the right, and as a result there’s less material around the hole: 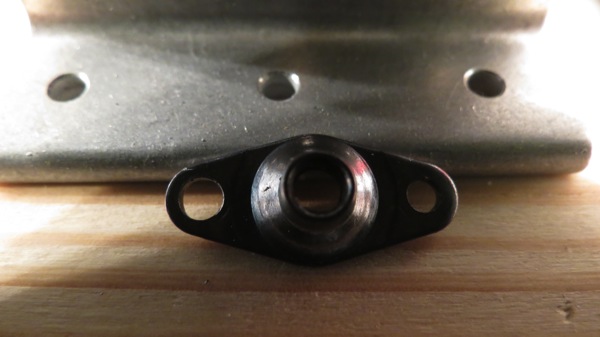 With that crisis averted, I sat down and went through the drudgery of deburring all the rivet holes in all the ribs. I suppose next time I’ll repeat all these steps for the left leading edge, and then one night there will be a lot of dimpling to do. Not sure how much I’ll get done this week though, and then I’m out of town for a week or so for Thanksgiving, and the following weekend (Dec 6), I’m doing an EAA workshop on electrical wiring. So it might be a while before I can prime this stuff and be ready for final assembly…