So I ended up shooting an email to the support folks at Van’s for their input on my bad rivet from Monday. A few guys on VAF had indicated that the rivet might be OK to leave as-is. I liked the idea of not drilling it out, but I was skeptical of it being good. So I figured I’d ask the official authority. Sadly, the response was not what I’d hoped for – I was advised to remove/replace the rivet. Not a particularly surprising response though.

On the way home from work today, I stopped by Home Depot and bought myself a work light. The general garage lighting is OK, but not great, but I don’t have the freedom to install a bunch of fluorescent strips like I did in Atlanta. I’d figured I’d end up getting a tripod light for lighting specific tasks at some point, and today was the day. Nothing fancy, but I did spring for the LED light over a halogen model. I’ve worked with the halogens before and they get HOT. I’m in Houston, I don’t need any more heat in the garage. 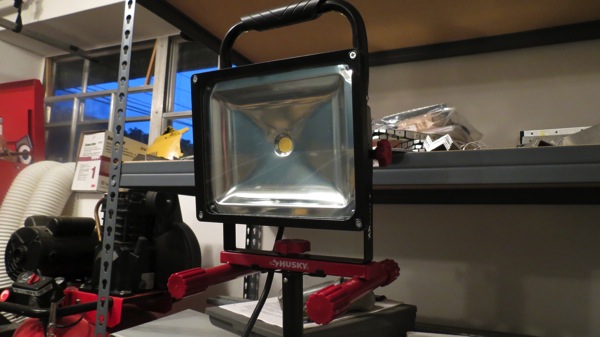 It brightens up the work area quite nicely: 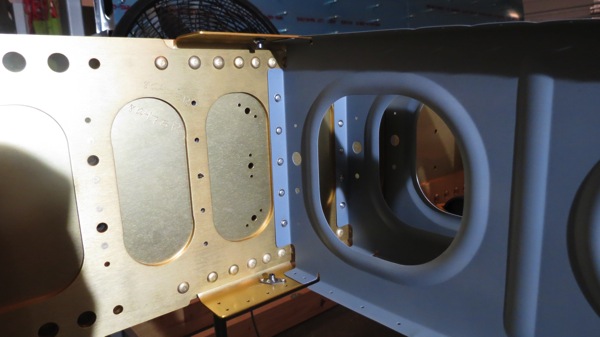 But enough fun and games, time to get down to business. Best-case scenario, I’d remove the one bad rivet without damaging anything, replace it, and be on my way. The challenge was getting the head off with it so far off-center. I drilled into the head as normal, attempting to be conservative, and got the head off, but it was to no avail – I’d put a little divot in the rib flange right beside the rivet hole.

The good news was that I went into this figuring there was a good chance I’d end up trashing the rib, so I was mentally prepared for something like this. And in a way, it was liberating – once I knew the rib was going away, I no longer needed to be careful with it. That freed me up to not have to be perfect while removing the other four rivets, and once they were off, I could just wrench the rib out of place with no regard for its survival.

That, however, was the easy part. Solid rivets swell when they’re driven, so a lot of their grip strength comes not from the heads, but from friction between the rivet shaft and its hole. That means that the thicker the material, the more grip there is from the shaft – which means that they’re a lot harder to drive out for replacement. I always get worried doing this, because I have to hit the punch pretty hard, which makes me worry about the punch slipping and damaging something. That worry goes up a notch when that something is the main wing spar.

Fortunately, I’ve developed a method for getting these rivets out that works pretty well. Once I have the head off, I start by drilling a very small pilot hole into the rivet shaft. Once that hole’s done and I’m convinced it’s well-centered, I open the hole up with a #40 drill. This is smaller than the #30 hole the rivet sits in, so I have some wiggle room. The point if doing this is twofold: it removes material to give the rivet room to deform and let go of the hole, and it also makes a nice “socket” into which I can insert the punch to drive the rivet out. No more worries about the punch slipping!

Even with all that, these things are tough to get out. I’ve taken to using the rivet gun with a flush set to drive the punch instead of tapping it with a hammer, and every one of these five rivets required that technique. None of them would budge with hammer hits.

But I got them out, and all the holes in the spar are in good shape. It cost me a rib, but that’s a small price to pay. It’s a $20 part after all.

I wanted to take another picture, but I didn’t know what to take a picture of. So here’s a picture of the rivets after I drove them out of their holes: 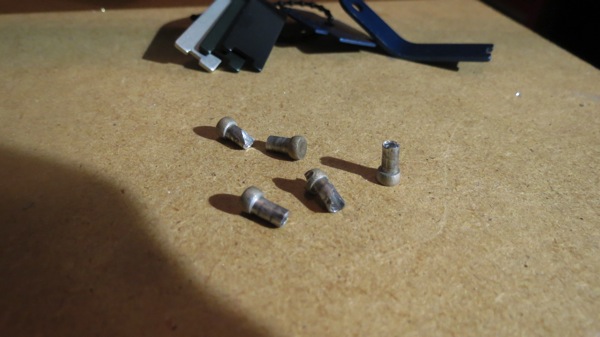