Wow, that actually went pretty fast.  After all that rib-straightening drudgery, it’s nice to be able to go out in the garage and really feel a sense of accomplishment in a fairly short period of time.  It helped that I basically had all my tools set up and ready to roll after my test piece from last night; I had one countersink cage set up with a #40 bit, adjusted for the flush rivets, and the other set up with a #30 bit, adjusted for the screws.  That let me basically just rock & roll through tonight’s work without a lot of the time-consuming trial-and-error setup stuff.  Very nice.

Anyway, last night I got about half of the rivet countersinks done on the bottom spar flange before knocking off for the evening.  Tonight, I went out and finished that flange, then flipped the spar around and did the rivet holes on the other side.  As I mentioned/planned last night, I then riveted a single nutplate in place and did a single test countersink for the screw, then put my tank skin substitute piece in place.  Perfect fit!

I got into assembly-line mode from there.  Basically, my procedure went like this:

In this way, I riveted all 60 nutplates and did all the screw countersinking in under an hour.  Very nice. 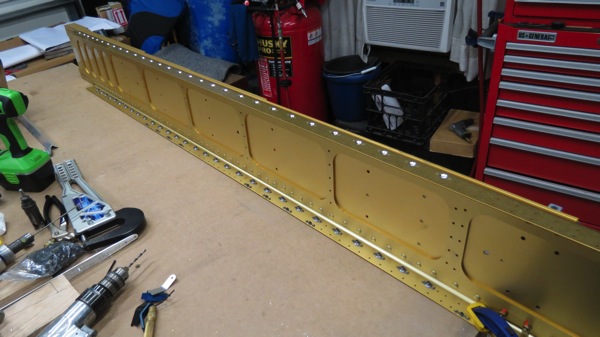 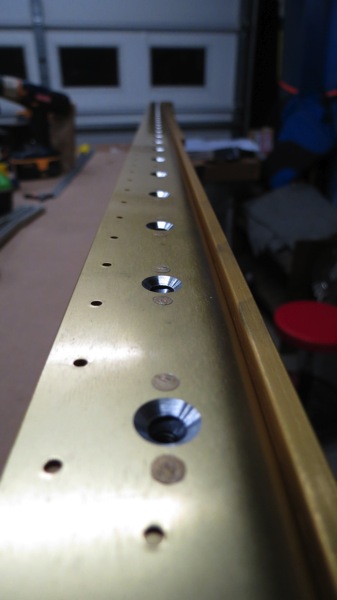 Once I get the tank attach nutplates on the other spar, I’ll need to go back and prime all those countersinks, since the bare aluminum is now exposed.  That should work out nicely; I can easily get the other spar done this week, and have Saturday to prime the flanges.

In other news, I talked to Daniel Schoning this weekend, and it just so happens that he’s wrapping up his wings and will be done with his wing stands any day now, which he’s offered to give to me.  The only issue is that he had his stands bolted to his garage floor; between not owning this house and wanting to be able to move the wings around to keep the garage functional, that’s not going to work for me.  But he suggested just mounting them on a rolling cart of some kind.  I think it’s a good plan, and it’ll save me some fabrication.  His only condition was that I donate them to another RV builder when I was done.  I can handle that.