I made a point of bailing out of the office right after 5 today so I could get home and finish priming those pesky rear spar channels.  After a quick stop at the farmer’s market for some dinner materials, I was home…except then I spent more time than I expected prepping for dinner.  No worries though, I still made it outside with plenty of daylight left.

I wanted one more coat of 7220 on the side of the spar channels I’d started Sunday, so I went ahead and shot that, then moved inside to work on the tiedown brackets. They were all primed and ready to go, so I clecoed everything together prior to riveting.  Even though I’m careful about marking all the parts, I checked them for proper fit against the spar just to be really sure before I started squeezing rivets.

I only had one hangup here-on one of the nutplate rivets, I got a little sloppy with the squeezer and the flush head ended up sticking up a bit.  Hooray, a drill-out!  As i calmly went to work on it, I thought back with some amusement to the time when drilling out a rivet was sort of sweat-inducing.  Of course, that pretty much guaranteed that something would go wrong.  After popping the head off the offending rivet, I start hitting it with the punch.  About the time I was thinking “I should be careful not to bend this nutplate,” I bent the nutplate.  So now I needed to drill out the other rivet and replace the nutplate…and apparently the other rivet was the most securely-set rivet I’ve ever done.  I went to town on that thing with the hammer and punch, to no avail.  Finally I hit on an idea – I got the rivet gun out with the flush set, and used that to hit the punch.  That got the thing out finally.

With all the rivets set, I walked back over to the spars for one final test fit.  Strangely enough, now the brackets didn’t want to fit between the spar reinforcement bars.  Hm.  I think when I checked before, the presence of the clecos prevented me from getting the assembly fully seated, giving me the false sense that the fit was fine.  Oh well, no big deal…I put each assembly in the bench vise and used the vixen file to shave a bit off the edges of each spacer, checked again, and everything fit fine.  Then I got to shoot primer on them yet again.

The brackets, after filing: 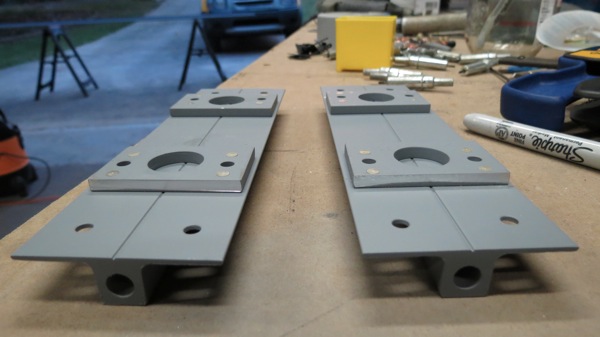 And with even more primer: 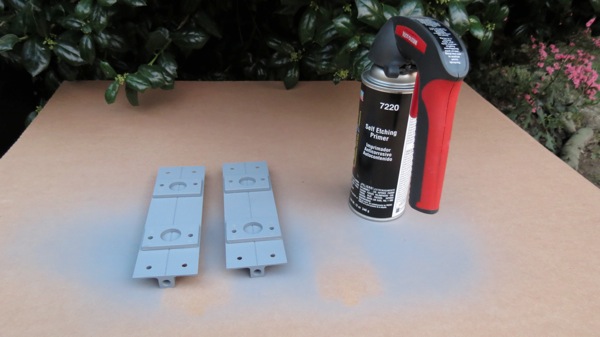 Meanwhile, the spar channels were dry enough that I flipped them and sprayed the other side.  I think these are finally ready to roll…that’s keep me busy one night, riveting the reinforcements into those channels. 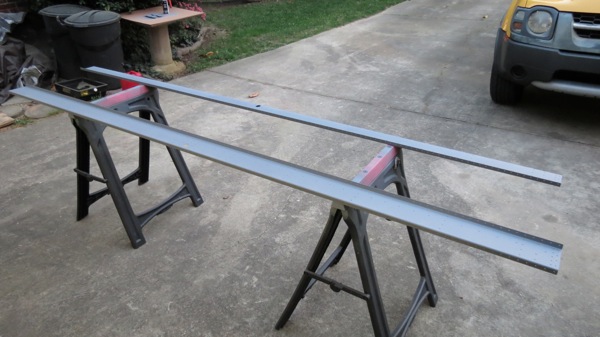 In other news, I called Van’s on Monday about my backordered parts.  They’d just gotten in the tank rib, and had one batch of nutplates ready to go.  The tank attach nutplates, on the other hand, they still didn’t have.  Seems they’re having some issues with their supplier, and the expected ship date for those is around the beginning of May.  But they went ahead and shipped the parts they had on hand.  I guess I’m going to have to stop procrastinating and start taking care of ribs, since I’ve got some more time on those nutplates.