Started the night by getting the drill press and band saw properly bolted down to the table.  It looks like a real workbench now!  Once the admiring part was over, it was time to get to work on the tiedown spacers.  The pieces were already cut to size, they just needed a lightening hole added before they got drilled in assembly with the tiedown brackets and spars.  The plans call for a 1″ diameter lightening hole, but the problem is I don’t really have anything that will make a hole that size.  A fly cutter would be handy for this, but…yep, don’t have one.  I decided instead to just make the hole 3/4″, since that’s the biggest hole my Unibit will make.  I figure the extra weight caused by making the hole smaller is pretty negligible.

The drill press worked like a charm for this stuff.  First, I marked diagonal lines between the corner of each piece to find the center.  Then I put a 1/4″ pilot hole in each piece, and followed with the Unibit.  The spacer material is a bit thicker than the depth of a step on the Unibit, so I had to actually drill from both sides to get the hole even.  Once that was done, I used a sanding drum on the Dremel followed by emery cloth to smooth out the interior of the holes.  A pass with the deburring tool on the edge of the tool and they were ready for drilling!

I made a lot of aluminum chips during this process: 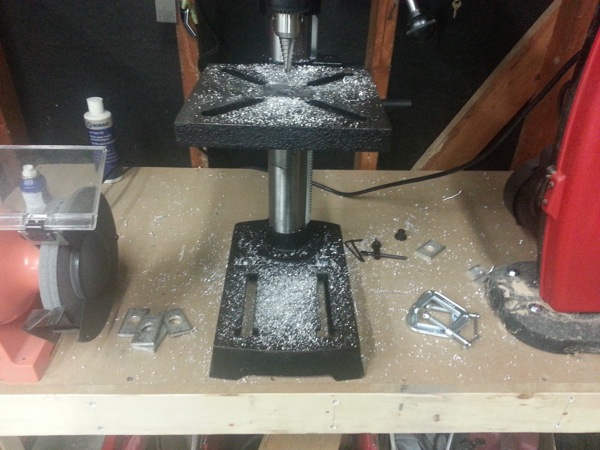 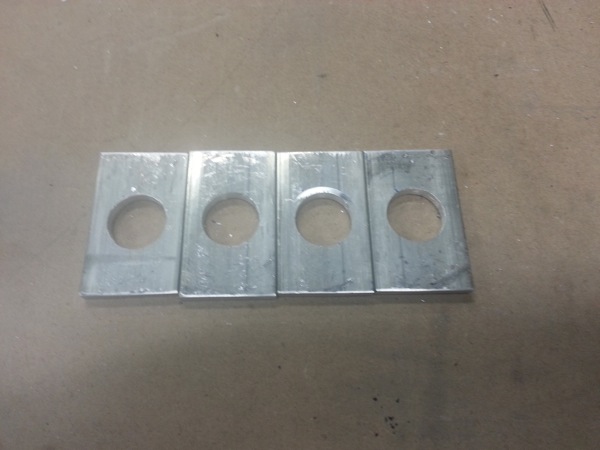 The tiedown brackets are match drilled to prepunched holes in the spar itself.  The plans give dimensions for making a single locating hole in each bracket; these I drilled using the drill press.  Next, a bolt is dropped through that hole and the spar to locate the bracket, and a square is used to position the bracket in place and clamp it down.  The spacers I made before go between the brackets and the spar; I used some blue masking tape to hold them to the spar while I was lining up and clamping each bracket.  Then the spar gets flipped over and it’s drilling time!

That done, I laid out the parts on the bench (labeled so I know where everything goes) and looked back at the directions.  Next step is to drill the spacers to the brackets for the nutplates that will be used to attach the aileron bellcrank.  The spacers will be riveted to the brackets and nutplates, that assembly will bolt to the spar, and the the bellcrank will blot to that assembly. (whew!)  I kind of wanted to keep rolling, but it was past 10:00 and the air drill and compressor aren’t exactly the quietest things on the planet.

I settled for clamping one bracket/spacer assembly together before calling it a night: 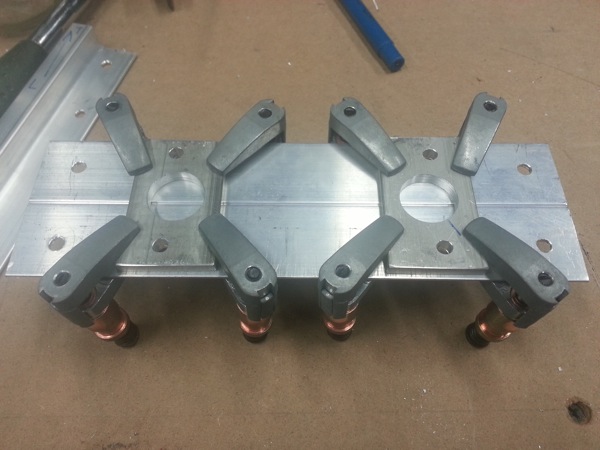